The finest hat in the entire series.

HBO’s newest prestige drama The Young Pope is obviously about Vatican intrigue, Jude Law’s impeccable American accent and bare ass, and creating as many Twitter jokes as possible. But do you know what The Young Pope is really about? It’s about hats. There’s more headgear sprinkled on the heads of people on this show than if a tornado ripped through a convention of milliners.

There are red hats, black hats, round hats, and square hats. There are men hats, lady hats, and hats that only the most divine among us can wear. There are more hats than Tony Soprano had panic attacks or Carrie Bradshaw had outfits that haven’t really aged that well. Here’s a look at all of the hats found in the first episode of the show, and their significance in the Catholic Church.

1. This is a zucchetto, the small skullcap worn by high-ranking members of the clergy. Basically it’s a yarmulke with an Italian name, like a Matzo Meatball. The name comes from the Italian word for pumpkin, because it looks like half a gourd. It was created in the Middle Ages for the most typical of reasons: to keep the head warm. 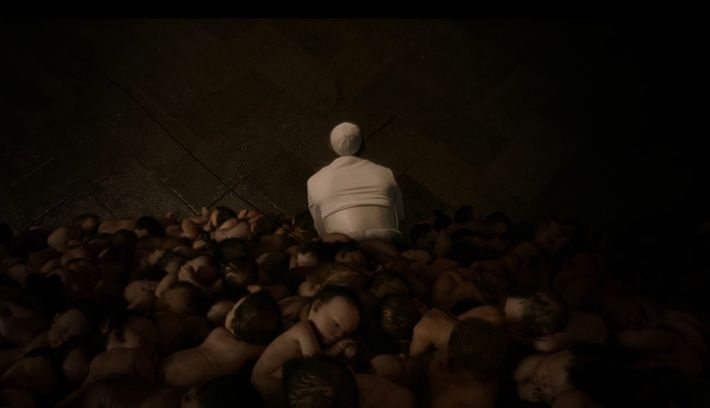 2. This is the morion of the Swiss Guard, the pope’s personal army of bodyguards. It originated in the 16th century but today is worn for ceremonial purposes only. It is defined as a helmet without visor or beaver. 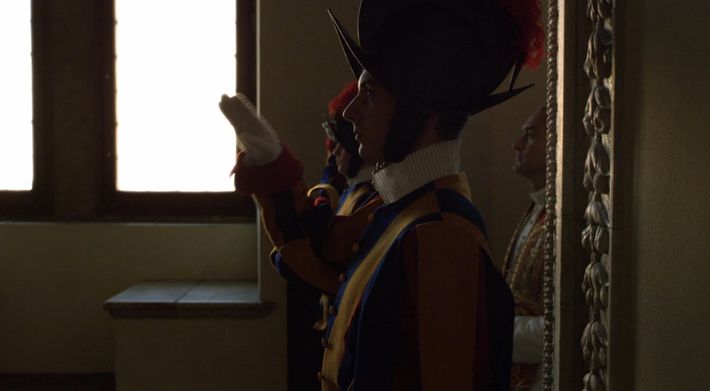 3. Look, it’s a parade of hats. It’s like the International Hats of Pancake. 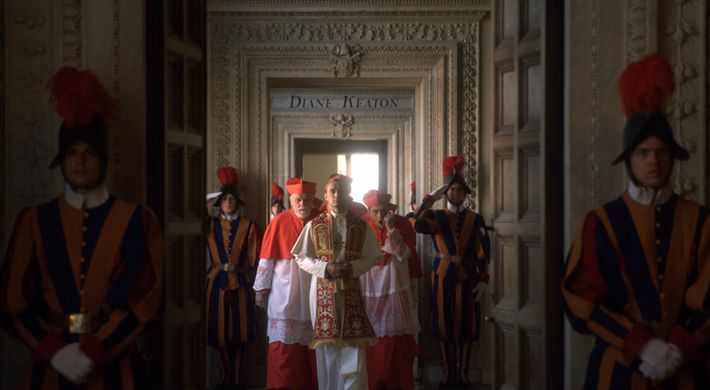 4. These cheap plastic poncho hoods mean some Italian vendor made a lot of money off of people standing around in the rain. 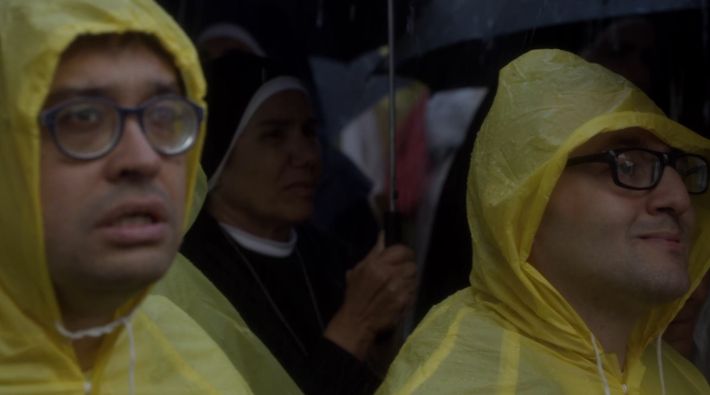 5. This is a biretta, a three-peaked collapsible headpiece that the cardinal wears when entering mass. It comes in other colors, but red or black are the most typical. The Spanish prefer a style with four peaks because, if you have ever seen the Sagrada Familia in Barcelona, you know Spanish Catholics prefer a whole lot extra. 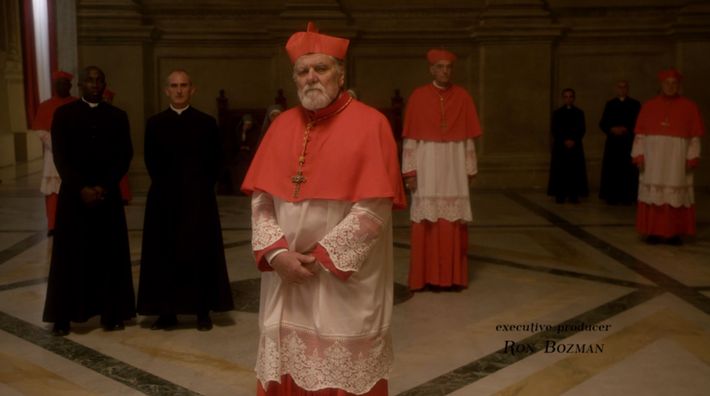 6. A nun’s habit actually refers to her gowns. This is a white coif and veil and is actually two pieces: one to cover the nuns hair for modesty and the other worn on top to cover her face in case she needs even extra modesty — or to go into ninja mode. You didn’t know that all nuns are ninjas? You shouldn’t have quit going to church. 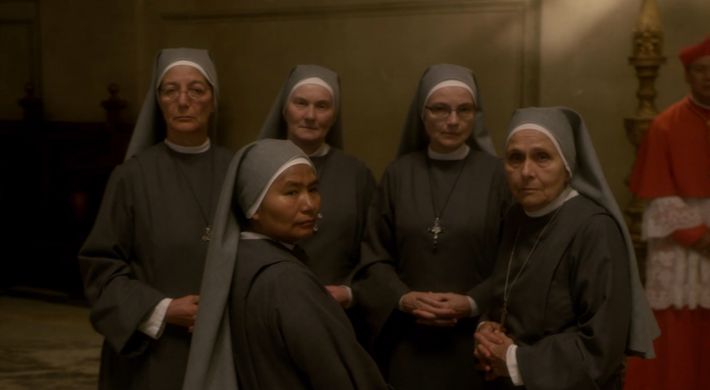 7. The cluster of red baseball caps in the bottom right corner denotes a crowd that got lost on their way to a Trump rally. 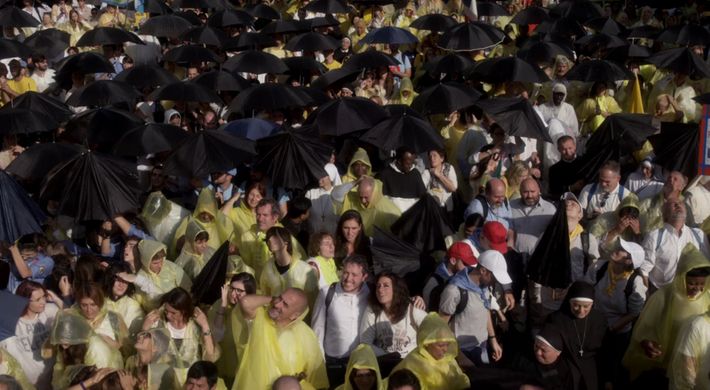 8. I have never seen these weird black-and-yellow riding hats the little girls are wearing anywhere, but if you see one on Etsy, please order it for me. 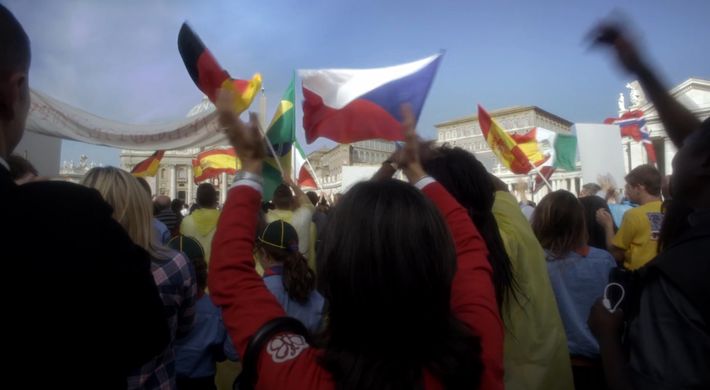 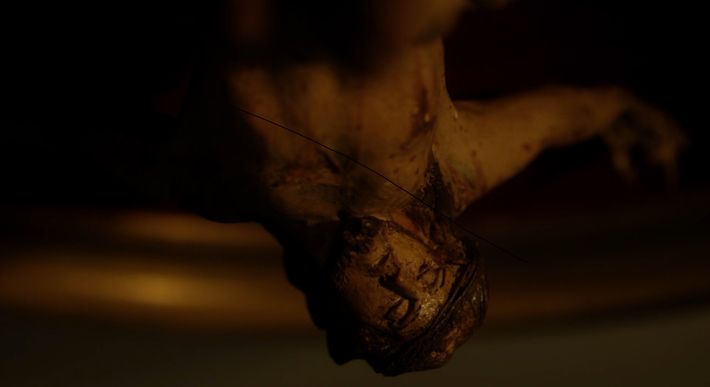 10. The purple zucchetto Lenny wears in this flashback doesn’t just mean that he has a flair for color. Purple is the color worn by bishops, so this scene took place some time when the Young Pope was more young and less pope-y. 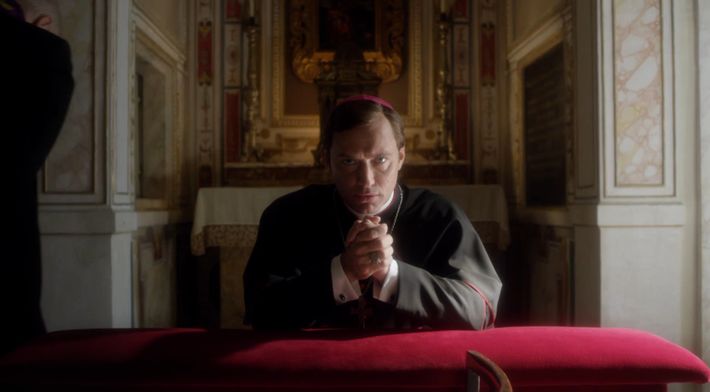 11. Cardinals wear the red zucchetto, and even when they wear a biretta or another hat, they still have this on underneath, like Mormon underwear for your scalp. The red symbolizes the fact that they would spill their blood for the survival of the church. No, really. 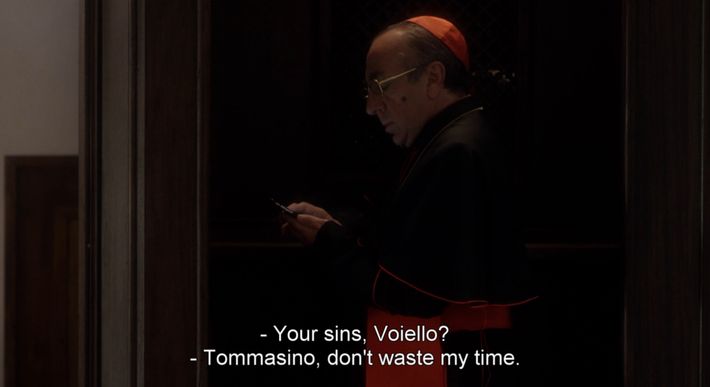 12. This appears to be a type of galero, a flat-brimmed round hat that was the official headgear of the cardinal until it was replaced by the less-fancy biretta in 1965, when the church tried to modernize itself. Some older cardinals still wear it, like emo teens who refuse to take off their Hot Topic clothing when visiting the White House. 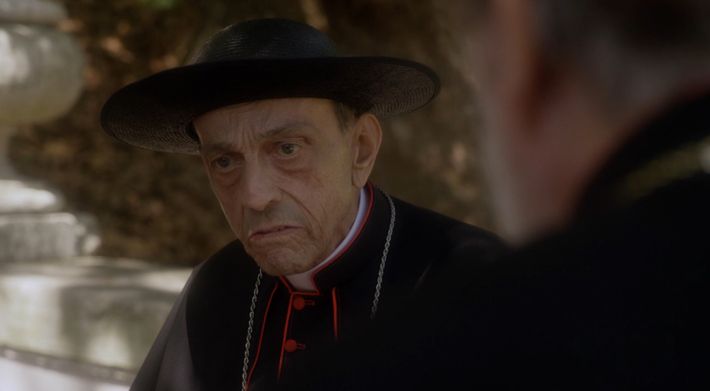 13. I have no idea what this fancy hat is — it appears to be an adorned white galero. It is the finest hat in the entire series. If there were an award for Best Hat, this would still probably lose to Meryl Streep somehow. 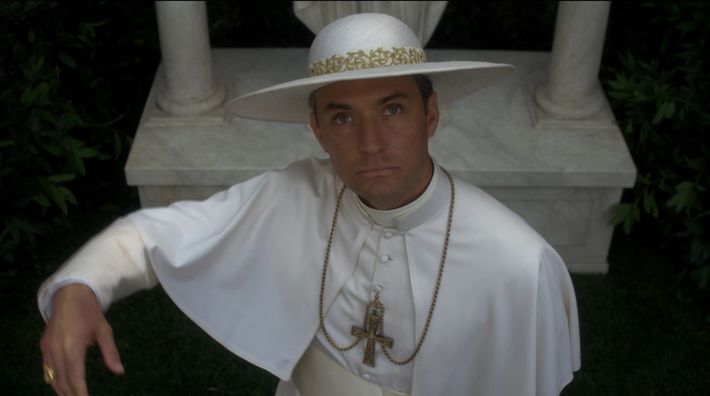 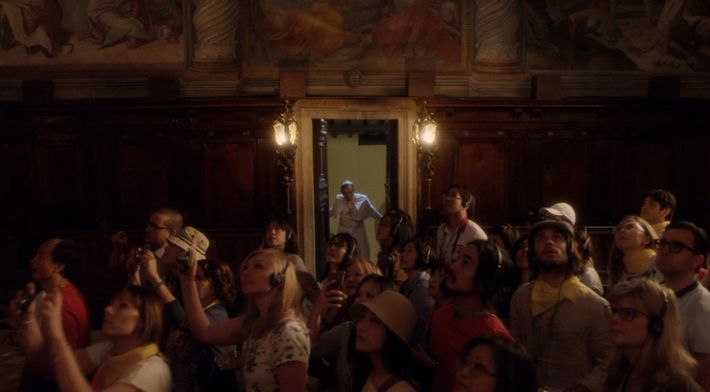 15. This is a fedora. It is the hat you wear when you are doing shady things in the middle of the night. 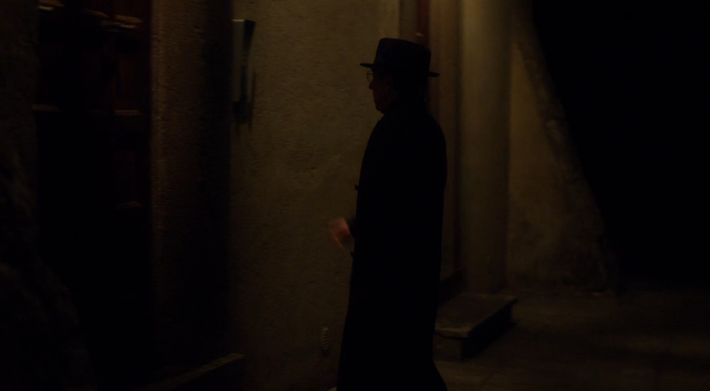 +Comments Leave a Comment
The Young Pope: All the Hats in the Premiere

trailer mix 8:02 p.m.
RHOBH Reunion Trailer: It’s Kathy Hilton vs. Lisa Rinna “You are the biggest bully in Hollywood, and everyone knows it.”
under oath 6:46 p.m.
Kevin Spacey’s Sex-Abuse Trial Is Already a Mess Spacey, wearing a slate suit, snow-white shirt, and powder-blue tie, did not appear worried.
jinkies 6:02 p.m.
Mindy Kaling and Constance Wu Are Solving the Mystery of Velma The first teaser for HBO Max’s Scooby-Doo spinoff dropped at New York Comic Con 2022.
good one podcast 5:05 p.m.
How Sam Morril Gets Laughs Between Laughs “It’s almost like a hesi move in basketball. Like, how can I get my jump shot wide open?”
By Jesse David Fox
coming soon 4:53 p.m.
It’s a-Here, Mario! Chris Pratt, look how you massacred our boy.
chat room 4:52 p.m.
John Macmillan Shot Laenor’s House of the Dragon Escape on His First Day on Set “It was a really stormy day, and we were out in the ocean in this massive hundred-year-old boat.”
future trash 4:27 p.m.
John Waters, Pope of Filth, to Direct Adaptation of His Book Liarmouth “Maybe it’s fitting that my novel was shocking enough to jump-start the engine of my film career.”
overnights 4:24 p.m.
She-Hulk: Attorney at Law Recap: Murdock & Walters Charlie Cox’s Daredevil returns to the MCU — and begins flirting immediately.
best of 2022 4:00 p.m.
The Best Video Games of 2022 (So Far) It’s been a really, really, really full year.
coming soon 3:45 p.m.
Glass Onion: A Knives Out Mystery Headed to Theaters After All But only for a week.
highway to hell 3:01 p.m.
The Live-Music Industry Is Broken Supply-chain issues, mental health crises, positive COVID tests. As artists continue to struggle, is any of this even worth it?
vulture guides 3:00 p.m.
A Grey’s Anatomy Catch-Up Guide, No Matter How Far Behind You Are Everything you need to know before jumping back in.
By Maggie Fremont
movie review 2:50 p.m.
Tár Brilliantly Undoes an Ego Monster of an Artist Cate Blanchett is toweringly great as a famous conductor who meets a very public downfall.
buffering 2:26 p.m.
It’s Time to Start Worrying About Peacock Can the streaming service come back from the dead?
trailer mix 2:05 p.m.
Jennifer Lawrence’s Rest and Relaxation Is Over in Causeway Brian Tyree Henry co-stars in the A24 drama co-written by Ottessa Moshfegh.
abel's angels 1:52 p.m.
The Idol Teaser Is Full of Sex, Drugs, and Pop Music Oh, and a cult led by the Weeknd.
overnights 1:25 p.m.
Survivor Recap: Stop Playing Scared While tensions are rising on Vesi and Baka, Coco is just chilling — until Karla goes exploring.
improv 1:15 p.m.
The Second City to Open New Location in First City: New York Its new space is coming to Brooklyn in 2023.
had to get away 1:04 p.m.
The White Lotus Season Two Booked Its Italian Vacation for October 30 The trailer features cheating, drugs, more cheating, and the delightful Meghann Fahy.
rankings 1:00 p.m.
All 193 Taylor Swift Songs, Ranked There are at least ten stone-cold classics in her discography.
By Nate Jones
More Stories