A scene from Sunday night’s pilot episode of 24: Legacy.

Fox’s 24 spinoff, 24: Legacy, opens with a home-invasion scene. The camera pans slowly through a suburban house, past a photo of a mother, father, and daughter, before swooping up to a piece of artwork hanging on the wall. Inside the frame is a child’s drawing, splattered with blood — our clearest sign that something is very wrong with this picture, if the comically ominous music playing wasn’t clear enough for you. “We’ve searched everywhere, it’s not here,” one brown man says to another. “For Sheik Bin-Khalid,” he intones, before shooting the father in the head and walking out the door, past the mother, slumped against the wall with her throat slit, and the child’s lifeless legs. 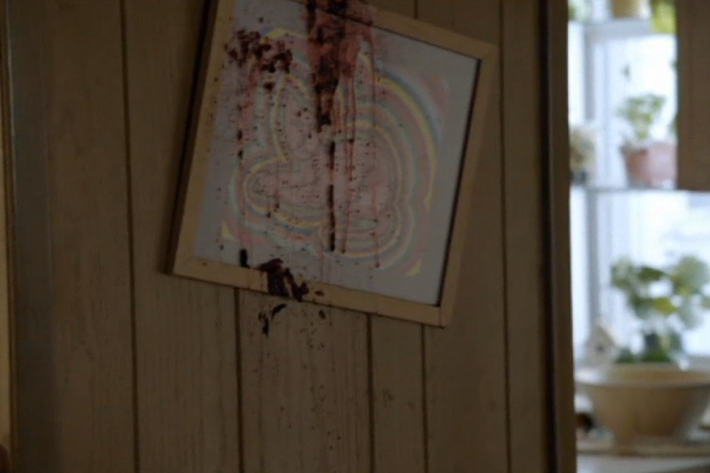 These are the first images Americans will see after the New England Patriots face off against the Atlanta Falcons during the most American of traditions: Super Bowl Sunday. 24: Legacy will premiere in the coveted Super Bowl lead-out slot, one of the most watched TV hours of the year — based on the ratings of previous shows to have aired directly after the big game, it’s all but guaranteed 20 million viewers, a massive audience any year, but especially in today’s streaming era. Moving from the all-American sport straight into American-killing Muslims is a jarring transition any day, but even more so after a week where people across the U.S. filled the streets to protest the Trump administration’s unconstitutional ban on seven predominantly Muslim nations. In this context, 24: Legacy is a painful reminder of why so many Muslims have been banned from entering the country: post-9/11 fears of the radical Islamic terrorist, and the presumption that you’re “guilty while Muslim,” a narrative that pop culture has been playing into for years.

The Islamic terrorist narrative is not atypical for 24 — a show that’s never been known for its subtlety — or for TV in general. Hollywood has hardwired depictions of bad Muslims into the popular imagination since 9/11 to make them completely unremarkable. Outside of Islamic activist organizations, there’s typically little outcry over the unrelenting portrayal of Muslims as terrorists in media. The producers of 24: Legacy likely didn’t anticipate their series would be premiering at a moment when much of America might actually care. (For the producers’ part, they’re spinning it as “Trump-era prescience.”)

The 24 spinoff stars Corey Hawkins as Eric Carter — in effect, the new Jack Bauer — a former Army Ranger who, along with his fellow Rangers, is now being hunted down by Islamic terrorists as retribution for killing their leader, Sheik Bin-Khalid, in Afghanistan. It’s a story that would have fit neatly in the show’s original run. When 24 first entered the TV landscape, it felt like a fresh, exciting entry. It had an innovative format that hyperadrenalized your standard action-thriller: Every season takes place across one day, with each episode accounting for one hour, unfolding in real time. But it’s popularity was also intrinsically tied to how much it tapped into America’s fears post-9/11 — the first season premiered in November 2001, two months after the attacks — and the debate around how government should deal with terrorism (the show’s answer: with force). The second season was the first to incorporate Muslim terrorists, a plotline Fox capitalized on with billboards that read “they could be next door.” (24 producer Howard Gordon has since said this was his biggest regret.) Season four is when Islamic activist groups started to get pissed: One plotline features a seemingly normal Muslim-American family leading a double life as radical terrorists. The story line climaxes when the wife, Dina (Shohreh Aghdashloo), wants her teenage son to kill his American girlfriend. When he can’t do it, she takes matters into her own hands and poisons her. It was so controversial, the Council on Islamic-American Relations (CAIR) sat down with 24 producers, a conversation that resulted in Kiefer Sutherland reading a PSA that aired during the fourth season, in 2005:

Hi. My name is Kiefer Sutherland, and I play counter-terrorist agent Jack Bauer on Fox’s 24. I would like to take a moment to talk to you about something that I think is very important. Now while terrorism is obviously one of the most critical challenges facing our nation and the world, it is important to recognize that the American Muslim community stands firmly beside their fellow Americans in denouncing and resisting all forms of terrorism. So in watching 24, please, bear that in mind.

24: Legacy’s arrival at this moment in American history highlights the awkward tension inherent to TV reboots, particularly ones linked to a larger, arguably dated, cultural discourse (see also: Queer Eye for the Straight Guy). In many ways, 24 reflected the Bush era’s war on terror mentality, and was largely accepted by critics and viewers at the time within that context. When a show reboots, especially one with such explicit political overtones, should it pretend like nothing has changed in its absence? In the case of 24: Legacy, in some ways things haven’t changed: Terrorists from predominantly Muslim nations are still viewed as America’s primary enemy. But in important ways, the context has shifted: Americans are now more aware of the fact that equating Muslims with terrorism has consequences, and that words and images can deeply influence the political climate.

It should be noted that not all villains on 24 have been Muslim, and not all portrayals of Muslims on 24 are negative — but Muslim people on the show still often interface with the question of whether or not they are terrorists. One of 24’s tendencies is to give a “good” Muslim character a subplot to offset the show’s more damning portrayals. Its view of Muslims swings between two extremes: good Muslim, bad Muslim. In the eyes of the state, you either support terrorism, or you’re a “peace-loving” Muslim (a refrain that also became par for the course during the 2016 election). 24: Legacy’s “good” Muslim story line, which revolves around the campaign director for a presidential candidate, Nilaa Mizrani (played by A Girl Walks Home Alone at Night’s Sheila Vand, who brings some nuance to the role), hinges on whether or not she has terrorist ties.

This use of morality as character development goes back to season two of the show, where one subplot revolves around a white woman’s fear that her sister’s fiance, Reza, has ties to radical Islam. He’s eventually redeemed, but only after the show expends a huge amount of effort to make you think he’s definitely a terrorist. As in Reza’s case, even if a character turns out to be good, it’s only after creating a baseline assumption of guilt, essentially putting them on trial and forcing them to prove their innocence, while making aesthetic choices — threatening music, suspicious glances, the character simply speaking Arabic — that further make you doubt their morality. It’s a setup that’s typical of political thrillers — is this person who I really think he is? — and it’s been applied to white baddies on 24 as well. The difference is, Muslims lose their humanity when they’re turned into symbols of “right” and “wrong,” while white people don’t get stuck with the stereotype.

There are moments on 24: Legacy when the show critiques the state, moments when it explicitly says that Islamophobia is bad; but 24 is not about the instances when it pays lip service to ideas it doesn’t have the range to do justice. The show’s politics are most apparent when you judge it on an aesthetic level rather than a textual one. And the aesthetic of 24 is such that its most evocative elements are the ones you remember. It’s a visceral show, meant to provoke a visceral response. The moments that stay with you are the ones that leave you feeling scared, angry, exhilarated. On Sunday night, though, it might just leave a bad taste in your mouth.