On Valentine’s Day, it’s nice to think about people whose love really inspires you. Mickey and Gus, played by Paul Rust and Gillian Jacobs, are not those people. The leads of Netflix’s Love, which is executive-produced by downbeat comedy maestro Judd Apatow, start off the show’s second season falling even further into a relationship that fuels their self-destructive tendencies. It’s all pretty grim, but at least they have a bunch of unkempt and yet adorable outfits to keep them company. Produced by Legendary Television and Apatow Productions, Love returns for a second season on March 10, and lest you think this isn’t going to be a long-term commitment, it’s already been renewed for a third. 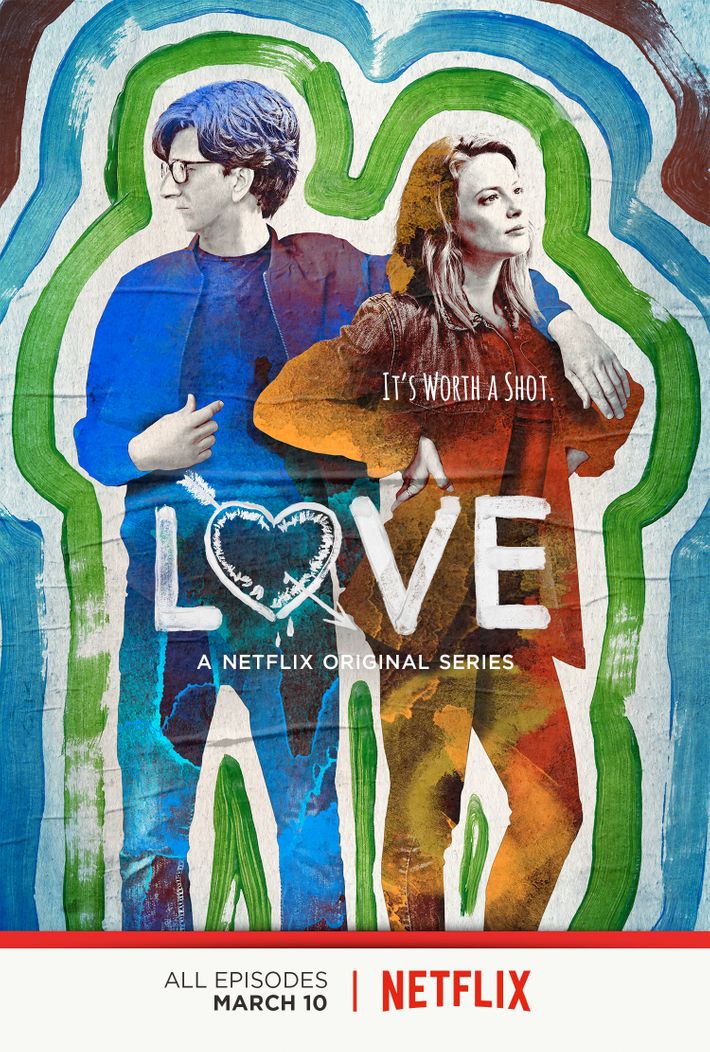 90s kids 5 mins ago
Retreat Into Nostalgia with the Legends of the Hidden Temple Reboot, You Baby And adults are allowed to play.
alexa play chasing cars 12 mins ago
Sandra Oh on Whether She’d Return to Grey’s Anatomy: ‘No’ “While I understand and I love it, I have moved on.”
the law 1:35 p.m.
The Biggest Revelations From the Pop Smoke Murder Case Hearings His alleged killer was only 15.
true believers only 1:08 p.m.
Huge Nerd Demi Lovato Will Investigate UFOs in a New Peacock Series [Meme voice.] Aliens.
superlatives 12:48 p.m.
The Most Virtuosic of St. Vincent, According to Annie Clark “With my guitar, I did what I always do, which is just kind of humbly make shit that I think is cool.”
By Brady Gerber
trailer mix 12:33 p.m.
Julianne Moore Is Spooky on Main(e) in Lisey’s Story Trailer “Was it real or was it my imagination?”
fruit ninja 12:04 p.m.
A Celebration of Jean Smart’s Sad-Funny Work on Mare of Easttown Helen Fahey just wants to play Fruit Ninja in peace.
quar goss 11:59 a.m.
Jennifer Lopez and Ben Affleck Went to Montana Alone for a Week, As Exes Do TMZ reported Affleck first reached out in February — and E! News says A-Rod is still reaching out too.
hot pod 11:40 a.m.
How NPR’s Invisibilia Reinvented Itself Plus, Clubhouse finally comes to Android.
reality tv 11:23 a.m.
Below Deck Sailing Yacht’s Boat Crash Was Worse Than All Those Clips Looked Both crashes, that is.
degrassi: where are they now? 11:02 a.m.
Drake to Receive Billboard’s Artist of the Decade Award at the 2021 BBMAs He beat out Taylor Swift, Rihanna, and more.
golden years 11:00 a.m.
An Ode to A Knight’s Tale and Its Perfect David Bowie Dance Scene Twenty years ago, A Knight’s Tale became a cultural phenomenon, thanks to the magical combination of Heath Ledger and a medieval disco.
By Ashley Spencer
trailer mix 10:33 a.m.
Matt Damon Brings Bass Pro Shop Energy to France in the Stillwater Trailer He needs to get his daughter out of jail.
trailer mix 10:05 a.m.
Dev Patel Is Axe Daddy in The Green Knight Trailer This one’s for the horny nerds.
movie review 10:00 a.m.
Army of the Dead Is a Tale of Two Zack Snyders His Netflix Vegas-heist movie set during a zombie apocalypse, starring Dave Bautista, starts off great, but the fun doesn’t last.
my single is dropping 9:52 a.m.
Sleater-Kinney Is Back As a Duo With a New Album Carrie Brownstein and Corin Tucker released lead single “Worry With You” off their self-produced album.
broadway 8:37 a.m.
Hamilton, The Lion King, and Wicked Will Return to Broadway September 14 It’s the circle of, wait for it, aaaaAAAaah.
movie magic 8:00 a.m.
How to Un-Cast an Actor When an Army of the Dead star got called out, director Zack Snyder decided to scrub him from every scene — and swap in Tig Notaro.
last night on late night 2:31 a.m.
Billie Eilish Brings ‘Your Power’ to the Desert for The Late Show Try not to forget your sunscreen.
future nostalgia Yesterday at 11:51 p.m.
Kevin Smith Wants to Remind Everyone He Coined ‘Bennifer’ the First Time Around Do the children know about Jersey Girl?
More Stories