Big Little Lies director Jean-Marc Vallée had never been to California’s stunning central coast when he and the HBO’s series’ producer and locations manager Gregory Alpert set off on their first scouting trip. Writer-producer David E. Kelley, who adapted the Australia-based novel, selected Monterey as the setting because of its physical beauty, demographic mix, and proximity to Silicon Valley. But it was the coastline’s ruggedness and power that sold Vallée, who was particularly taken with the Bixby Creek Bridge on the Big Sur coast, which makes several appearances on the show. “The ocean there is angry and violent and there was a nice symbol,” Vallée said. “The force of humanity, this infinity.”

“That initial two-day trip, we went just to let Monterey wash over us, to get a feel for it,” said Alpert, who has been securing locations for movies and TV shows for over 20 years. “I had been there before as a tourist but never with the eye of filming there. And Jean-Marc was seeing it all with fresh eyes.” Alpert and his team of eight scouts were responsible for finding the ideal locations, securing permits, and serving as a liaison between the production and city officials. Finding the right house for each of the main characters was Alpert’s biggest challenge, but Vallée helped by giving him a breakdown of each woman’s socioeconomic status as well as her viewpoint.

Big Little Lies is full of secrets, but the biggest one might be that a majority of the seven-episode series was filmed in and around Los Angeles, not the Monterey Peninsula area. In fact, only one of the spectacular featured houses is actually on the Monterey Peninsula. Alpert walked Vulture through the show’s main locations, why they were chosen, and how much you’d have to shell out for one.

In the first episode, Madeline mentions her wealth does not compare to that of most of the mothers at her daughter’s elementary school. But in reality, it is the most expensive home used on the show: The Mackenzie’s four-bedroom house, located in Malibu, is valued at $14.8 million.

“The people who live up there — they are going to know that one,” Alpert said. “We scoured the entire coastline looking for this house and settled on staying in Southern California because I can count on one hand the houses up in the central coast that are actually on the beach. So this is your standard Malibu beach house, and besides that beautiful view, it also has a beautiful interior, that beautiful island in the kitchen, which Jean-Marc used a lot.” Along with the kitchen, most of the interiors were also shot at the actual house, including the living area and Abigail’s (Kathryn Newton) bedroom.

“Celeste’s house is the most magical of all of them,” Alpert said. But originally, the Wrights weren’t going to live there — Alpert and his team had selected another house that fell through and sent them scrambling. “The first time I walked through it, I had one of those epiphany moments,” Albert said. “I was so taken by the view. It turned out to be a much better place for that family.”

Located on the Monterey Peninsula, the house is a rental property worth $6 million. Director Jean-Marc Vallée took advantage of the house’s proximity to the rugged coastline and filmed many scenes outside. “The furnishings weren’t that interesting and the walls were all white,” Alpert said, “so our production designer John Paino introduced the very light blue color and the house just warmed up so much.”

Celeste’s expansive bedroom, bathroom, and closet are not part of the house — they were built on a stage. “As wonderful as the ground floor of the house was, the second floor didn’t offer what Jean-Marc wanted,” Alpert said. “When you see Nicole in bed, you want her to have the view of the ocean so that was all built onstage, and a green screen was used. I think we really elevated the house in terms of that.” 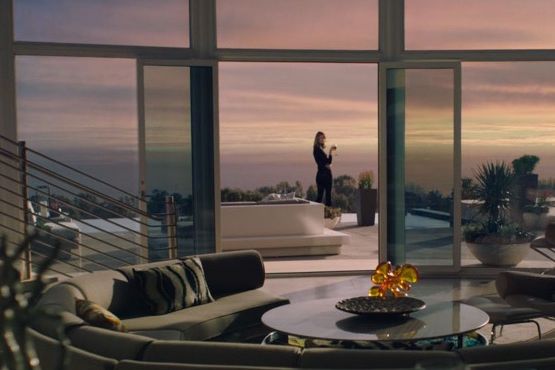 Alpert didn’t want the Kleins to live in the sprawling five-bedroom mansion seen in the series, because the $12.4 million home, located in Malibu, has appeared in many movies and commercials. “I was resisting, even showing it to Jean-Marc because of that, but we presented it and he picked it and then I was kicking myself,” Alpert said. “I felt in some way it was doing a disservice to the show. But then I remember watching the first episode and there’s Renata standing at the edge of the world, glass of wine in her hand. The [director of photography] had shot it in a way that I’ve never seen the house shot before and I thought, That’s why Jean-Marc’s the auteur and visionary that he is. At the very top economically is Renata. She’s at the top of her golden palace overlooking the world, and it looked magnificent. I was wrong.”

Jane’s postwar bungalow is located in Pasadena, Calif. The show only filmed exterior shots there; the interiors, based on the real house’s layout, were all built on stage because the $520,000 cottage, chosen in part because of the canopy of trees on the street, “looked better on film than it actually was,” Alpert said.

“With all of the other homes, Jean-Marc wanted to convey that if you don’t see the water, you hear it,” Alpert adds. “But Jane has a different relationship to the water. She doesn’t live near the water but you see something unique and different going on because you see her footsteps in the water.” 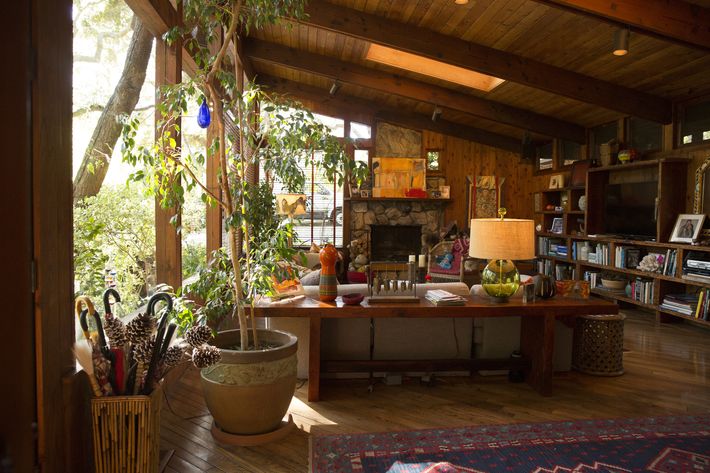 Alpert’s assistant Kathy found the nearly $2.6 million home near Calabasas, California. “That was another house where the inside and outside worked beautifully together and there was a lot of land,” he said. “This is a house I could see myself living in.”

Nathan owns a landscaping business, and Bonnie is in touch with nature, “so it is only fitting that their house be located in a wooded and beautifully secluded area,” Alpert explained. “Their house feels like it is part of the environment.” 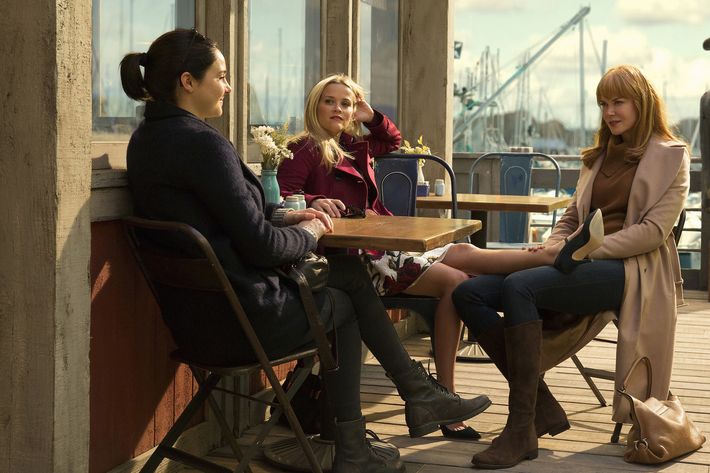 Locations: Monterey, and a sound stage in Los Angeles

Most of the scenes where Celeste, Madeline, and Jane meet at a local café are shot at Monterey’s most popular, tourist-oriented wharf — at least they appear to be. Since they had to shoot scenes at the wharf regularly throughout the series, and weather conditions could get nasty, they didn’t film there as much as it seems. “We used that as a basis and took a lot of shots and then re-sized it and built it on stage,” Alpert explained. “The actual restaurant where they sit is on a stage in Los Angeles. Then [visual effects supervisor] Marc Cote made it look like they were right there. I think even the people of Monterey will be fooled by that because it looks so much like what it does in reality.” 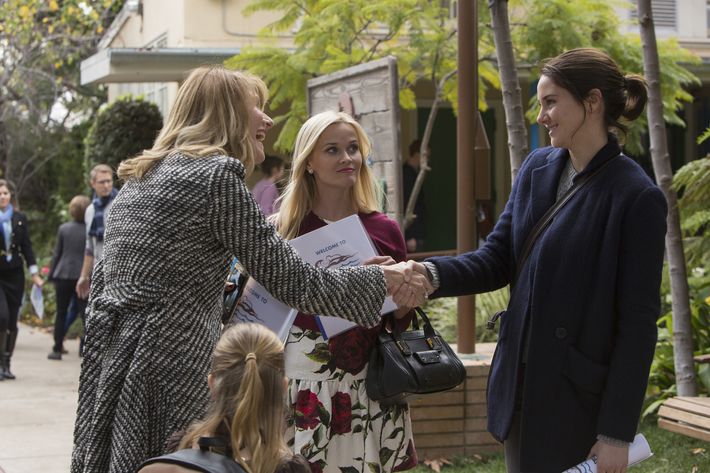 Otter Bay Elementary School is actually Kenter Canyon Elementary School in Los Angeles’s Brentwood neighborhood. “We scouted a lot of great schools up there, but because there’s so much time spent at the school, and we found this school that had the same vibe, we chose this one,” Alpert said. “We did a lot of painting and made it look like Otter Bay. The principal was wonderful to work with.”

Viewers first see Jane run to the edge of a cliff in the second episode, but it’s an image that repeats throughout the series. The striking backdrop is Garrapata State Park on the Monterey coast. Viewers will also get a glimpse of the park’s beach in the series finale. That beach where Jane runs along the water? That’s a different one — Del Monte Beach in Monterey County.