The time has come: We need a new Lisbeth Salander. Now that The Girl With the Dragon Tattoo is being rebooted as The Girl in the Spider’s Web (the fourth installment in the Swedish book series), Rooney Mara won’t return as the brainy, volatile hacker. Director Fede Alvarez said the production is doing a “global search” to find a new Lisbeth, and that he won’t rely on the original David Fincher–directed movie’s casting. Still, there are whisperings that Natalie Portman and Scarlett Johansson are considering the role. Respect to those Boleyn girls, but how about not: If a global search is on the table, why not choose someone who’s a little less famous, more unusual, and probably within Sony’s budget? Here are 11 actresses who’d make perfect Lisbeths.

Sasha Lane
Lisbeth Salander doesn’t seem anything like Star, the free-spirited teen Sasha Lane played in her acting debut, American Honey. In that movie, Lane could be naive and wild, a worthy entrant into an American outlaw fantasy. Lane’s performance gave Star a hardness, though: Even when people disappointed her, she wouldn’t be fucked with. When Shia LaBeouf and his rattail had the nerve to playfully point a gun at her, Lane calmly cocked it and turned it on him. The best part is that she wasn’t even showing off, she was just irritated. That’s a total Lisbeth Salander move: Lane can be viscerally vulnerable, but unfuckwitable all at once. — Hunter Harris

Alicia Vikander
First things first: Alicia Vikander reportedly turned down the role of Lisbeth Salander, after rumors swirled that she might replace Rooney Mara. That makes sense. After winning an Oscar, Vikander’s busy being in all the movies, including a Tomb Raider reboot, and there’s no reason to sign up for another franchise, especially after her tedious stint on Jason Bourne. But then again: Maybe Alicia Vikander’s just too successful. Do we really believe she’s that good? Are we really going to allow her to do a Vanity Fair cover over Skype? Did you see the wool commercial that was The Light Between Oceans? Don’t Vikander’s choices seem a little too safe? Anyway, if Alicia wants to win the people (me, specifically) over, she’ll eat the Swedish equivalent of crow, sign up to play Lisbeth, and risk scathing comparisons to Mara’s performance. Also, Vikander’s actually Swedish, and that seems relevant. — Jackson McHenry

Rihanna
Lisbeth Salander is a porcelain-skinned Swedish woman with many tattoos. Rihanna has just one of those descriptors working in her favor, but the rest is irrelevant. Race-bent characters are no longer the stuff of Tumblr fanfic: Hermione is black on the West End; Annie got to be black in the reboot; give it another decade, and the majority of our Disney princesses will be women of color. With the right accent coach, Rihanna can be a black Swede indeed. Some might argue Rihanna doesn’t have the Lisbeth look. I present to those fools Goth Queen RiRi in all her jet-black-rattail, baby-bang glory. If that Lisbethan spread somehow leaves the imagination unconvinced, recall that Rihanna has a long history of playing savage misandrists. And, for her next role in Ocean’s 8, she gets to be a stylish hacker. A hacker! It’s like Rihanna’s been auditioning for Lisbeth all along. — Dee Lockett 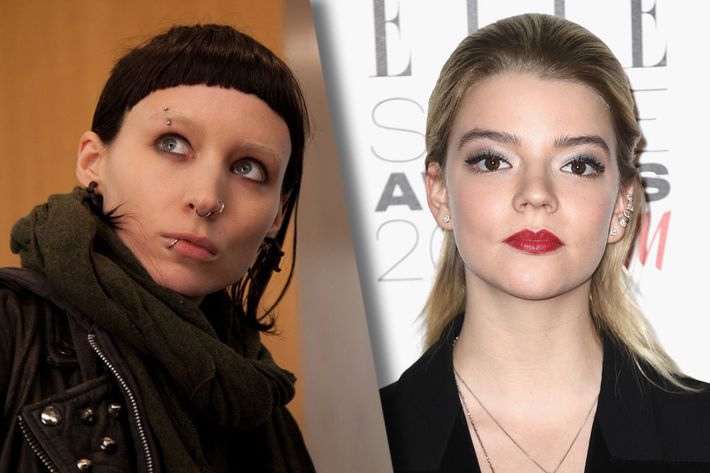 Anya Taylor-Joy
She’s horror’s girl du jour, but Taylor-Joy isn’t just a trend. She’s an exciting emerging talent who seems to relish the darkest material she can get her hands on, and not for nothing, she’s also fascinating to look at. Vulture described her as “a remarkable camera object,” and that’s exactly what made Noomi Rapace and Rooney Mara so watchable as the first two Lisbeths. Rapace — an underrated overall performer — had such a distinct, otherworldly look that she filled the camera and forced you to watch, no matter how gruesome things got, and the same went for Mara. Taylor-Joy is preternaturally watchable, and that’s an essential Lisbeth quality you just can’t direct into a part. — Jordan Crucchiola

Riley Keough
Can anyone play icy better than Riley Keough? Some episodes of The Girlfriend Experience might leave you checking to make sure you still have a pulse: Keough plays off the chaos of handling transactional, shallow relationships with a handful of selfish men expertly. In both Girlfriend Experience and American Honey (where she played a boss/madame/drill sergeant), she acted ferociousness, not as fiery — lots of yelling and stomping around, etc. — but with an unnerving coldness. Lisbeth Salander’s hostility, trauma, and antisocial behavior are right within Keough’s wheelhouse. — HH

Kristen Stewart
Kristen Stewart has all but trademarked a very particular brand of moody, lip-biting, hair-flipping melancholia. What better shock to the audience’s system than the reveal that behind that close-mouthed smile is a well of ass-kicking rage? Kristen Stewart as Lisbeth Salander would make for both a fun diversion from and a natural extension of Stewart’s recent acting choices, while somehow also being a casting choice so obvious that it goes all the way around to brilliant again. Plus, you know she already has the jacket. — Halle Kiefer

Jane Levy
Right now, you can’t fantasy cast a Fede Alvarez thriller, especially one that could have a hard R rating, without throwing Jane Levy into the conversation. She’s given gloves-off lead performances in the two movies that landed Alvarez his new gig — Evil Dead and Don’t Breathe — and no matter how much he has asked of his star performer, she has delivered with full bloody commitment. If an actress gives you that turkey-baster scene, you give them a reading for Lisbeth Salander, and Levy is suited to balance the rawness and vulnerability of the role. — JC

Garance Marillier
The 19-year-old French-Belgian actress has emerged with the new coming-of-age horror film Raw, and her performance drives the Cannes darling from start to finish. There is a freshly hatched quality to Marillier: She has a lovely, feminine face, and a somewhat androgynous young body that could physically channel the social otherness of Lisbeth, in a way that harks back to Rapace in the original Swedish films. The selling point, though, is Marillier’s ability to translate a kind of madness within. When she tilts her chin downward while casting her glance straight on she turns from gawky, pretty preadult to a fury who’s just biding her time until she strikes. Lisbeth is fierce, but she is also a victim of chronic abuse who carries a lot of dark weight on her shoulders at all times. The character demands someone who can play a social outcast with a trained survivor mentality, and can convincingly wear Lisbeth’s goth-punk armor, but keep a vulnerability behind the eyes. Marillier can bring it. — JC

Jisca Kalvanda
The obvious: Jisca Kalvanda has the lowest profile of all the talent on this list. Her biggest role has been supporting: In the very excellent French movie Divines (now streaming on Netflix!), Kalvanda played the menacing, boisterous drug dealer that the two leads get entangled with. But — and bear with me here — this is a reboot for a reason. Why not cast someone who can really access Lisbeth Salander’s intensity? The Girl in the Spider’s Web is a fresh start. Kalvanda doesn’t match Lisbeth’s description in the book — petite, Swedish — but Divines proves Kalvanda is capable of matching the character’s volatility. — HH

Elizabeth Debicki
For being a six-foot-regulation beautiful blonde, Elizabeth Debicki is an interesting wild-card figure. She’s mostly worked in supporting roles up to this point, but has proven a captivating presence who can maximize small amounts of screen time in movies like The Great Gatsby and The Man From U.N.C.L.E. Her face is soft, but she’s icy, and she has a sinister underlayer that came through in U.N.C.L.E. and made her such a compelling villain. Debicki seems like she’s just waiting for the right role to really push her range; and once again, she’s got a look that pulls your eyes to her even when she’s not speaking. Salander isn’t a super-verbal character, so that kind of charisma is essential. — JC

Zoë Kravitz
Listen: Zoë Kravitz’s punk vibe already looks the part. She’s the master of Lisbeth Salander’s cool: independent, wily, a little wild. Kravitz has had a good run on Big Little Lies as the bohemian, svelte stepmom who is genius at getting under Reese Witherspoon’s skin. It’s been a minute since Kravitz has had a role with an edge, and she’s yet to be at the center of an interesting story. The Girl in the Spider’s Web would be an ideal introduction to Zoë Kravitz, leading lady. — HH

+Comments Leave a Comment
11 Women Who Should Play Lisbeth Salander

vulture lists 15 mins ago
10 Essential Movies About Chess Queen of Katwe, Searching for Bobby Fischer, and other films to satisfy your sudden desire for chess content.
covid-19 22 mins ago
Bad Bunny Tests Positive for COVID-19 After Skipping the AMAs The musician had to miss his performance at Sunday’s American Music Awards.
origin stories 23 mins ago
The Story of The Most Influential American Comedy Factory You’ve Never Heard Of In the late 1990s, Boom Chicago took root in Amsterdam — and with it, the careers of many of today’s TV and movie standouts.
By David Peisner
tv review 24 mins ago
The Flight Attendant Is a Goofy-Sad Escapist Caper for Our Times It feels odd to call a thriller a romp, but that’s about where this snappy, Kaley Cuoco–starring HBO Max series lands.
ready set controversy 11:17 a.m.
GBBO’s Hermine Writes Farewell Letter As World Mourns Her Elimination Meanwhile, a baker who’s advancing to the finals, Laura, is being subjected to online harassment.
money moves 11:17 a.m.
Snapchat Is Giving Out Cash for Viral Snaps Money, please!
close reads 10:14 a.m.
The Queen’s Gambit Is the Forrest Gump of Chess It knocks you out with its lush costume design and production, while its beautiful white heroine slips unscathed past the roiling traumas of the era.
By Jane Hu
sneak peeks 10:00 a.m.
Natalie Palamides’s Nate Will Cry on Netflix in December The comedy special debuts the week after Thanksgiving.
extremely online 10:00 a.m.
Charli D’Amelio Becomes First Person With 100 D’Amillion TikTok Followers She reacted to the news with a live video, of course.
grammys 2021 9:57 a.m.
Let’s Predict the 2021 Grammy Nominations The nominations will be announced on November 24.
By Justin Curto
extremely online 8:00 a.m.
It Started With a Laugh In 2019, Ashnikko broke out after a viral hit on TikTok. What if it wasn’t a fluke?
By Emma Madden
vulture picks 7:30 a.m.
27 Notable New Releases Over the Next Two Weeks A Euphoria Christmas episode, Megan Thee Stallion’s debut album, Kristen Stewart in Happiest Season, and more.
2020 amas 12:56 a.m.
Billie Eilish Gives ’Em Her Best in 2020 AMAs ‘Therefore I Am’ Performance Did you have fun? You know we did!
overnights Yesterday at 11:11 p.m.
Fargo Recap: Saved By the Ghost Slaver Who saw that coming? No, seriously, could anyone have seen that coming?
2020 amas Yesterday at 10:54 p.m.
If You’re Feeling ‘Lonely,’ J.Lo and Maluma’s AMAs Set Is Not Going to Help They both had it coming in their very “Cell Block Tango” performance.
overnights Yesterday at 10:30 p.m.
The Real Housewives of Potomac Recap: Dominatricks and Strategery The Portugal trip comes to an end on a sexy, yet disappointing note.
amas 2020 Yesterday at 10:16 p.m.
Your Knees Will Explode Just Watching Megan Thee Stallion’s AMAs ‘Body’ Set Please consult your Hot Girl Orthopedic Surgeon before attempting at home.
overnights Yesterday at 10:02 p.m.
The Undoing Recap: Not Feeling It The Undoing heads to court, and Haley shows why she’s worth however many hundreds of dollars she charges per hour.
amas 2020 Yesterday at 9:22 p.m.
The Weeknd Performs at the 2020 AMAs With the Brightest Firework of All, Kenny G How much firework smoke can one person safely inhale?!
2020 amas Yesterday at 8:54 p.m.
Taraji P. Henson Works Her ‘WAP’ Off to Entertain You As Your 2020 AMAs Host “I know you’re still at home, but tonight? You’re home with me.”
More Stories