Ed Sheeran has a lot of tattoos. For those who only know Sheeran by his music, this might come as a surprise, but it’s true. He has so many. More than most friends of Taylor Swift. If not all! He may even have more than most professional athletes! I know. It’s an amazing fact about Ed Sheeran.

Like, he has this big tattoo of a lion. I’m not lyin’. I would never. This post is #TrueNews. Ed Sheeran has tattoos.

Here is another tattoo of an animal. It’s a koala. This is a tattoo Ed Sheeran has.

“Puss in boots relates to a song called ‘Wake Me Up,’ where I talk about Shrek.” This is a real quote, by the owner of this tattoo: Ed Sheeran.

In this Ed Sheeran tattoo, each puzzle piece is for a friend, or “mate,” who has a corresponding piece tattooed on them. (There is an open space for Ed’s eventual wife: a tattoo gun with googly eyes glued on.)

"everything that happens is from now on"

Ed got this tattoo because of his childhood nickname. It’s a Teddy Bear. His nickname was “Teddy” because it rhymes with Eddy, which is long for Ed. It wasn’t “Bear.” Bear doesn’t rhyme with Eddy.

Got a family tree I did

This tattoo of a tree is on Ed Sheeran’s arm! 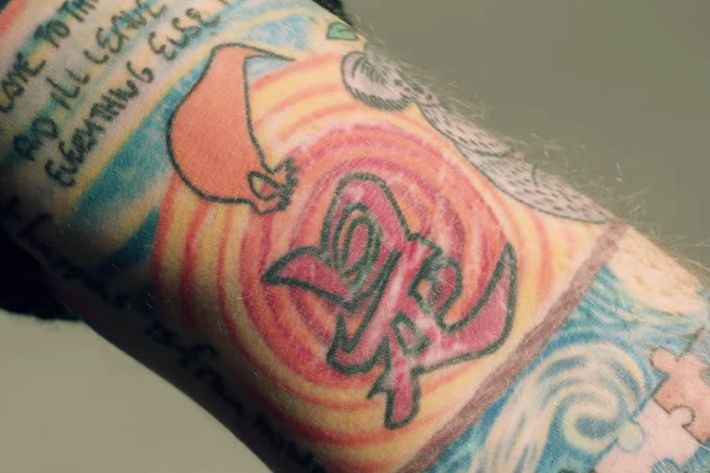 Ed says he thinks he knows what this Japanese symbol means. We know what it means: That he has a lot of tattoos!

This is another one. (Tattoo.)

This is another tattoo that Ed Sheeran, singer of “The A Team,” got on his body.

A tattoo of a decapitated Lego. Why did he get this? He went to Legoland. 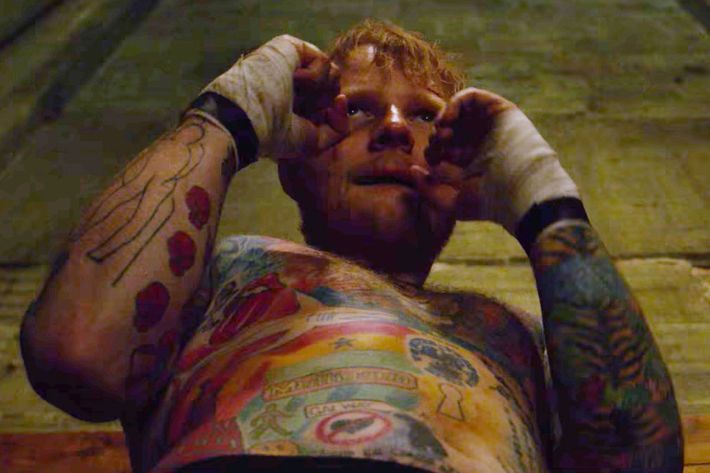 So, yes, Ed Sheeran has a lot of tattoos. I think that much is clear.

+Comments Leave a Comment
Ed Sheeran Has a Lot of Tattoos

too much fun 21 mins ago
Is Aubrey Plaza’s Blonde Era Part of an Elaborate Prank? She might be in prank witness protection after filming The White Lotus.
money money money 4:08 p.m.
Glass Onion Solves the Mystery of Getting People Into Theaters The whodunit made an estimated $15 million from just 600 theaters.
vulture lists 3:30 p.m.
13 Holiday Horror Movies You Can Watch Right Now From classics like 1974’s Black Christmas to the 2018 zombie musical Anna and the Apocalypse.
doing something unholy 2:32 p.m.
Kim Petras Has ‘Nothing to Say or Be Ashamed of’ About Dr. Luke Collabs She was previously one of his loudest defenders.
knives? out. 1:48 p.m.
Glass Onion: A Knives Out Mystery Delivers Its Final Clue Must see: Janelle Monáe and Daniel Craig discussing the game Clue.
flop weekend 12:42 p.m.
Disney’s Strange World Eats Space Dirt at the Box Office Not even Jake Gyllenhaal’s press-junket memes could save it.
pick-a-little donate-a-lot 12:20 p.m.
Nicole Kidman Comes to This Place (The Music Man) for Magic (to Donate $100K) Only she could earn a standing ovation as an audience member.
vulture 10x10 12:00 p.m.
The Geometric Puzzle 21-Down, Five Letters: Movie that gave us the term “chestburster.”
the law 12:00 p.m.
Everything We Know About the Megan Thee Stallion and Tory Lanez Shooting Lanez has been ordered under house arrest following an alleged altercation with August Alsina.
By Victoria Bekiempis and Zoe Haylock
piano's hot 11:29 a.m.
Damien Chazelle Is Spiritually Incapable of Making a Movie Sans Jazz Margot Robbie All About Eves Samara Weaving in the Babylon trailer.
overnights 11:18 a.m.
The Real Housewives of Potomac Recap: Take It to da House Somehow, Karen has become the personal steward of everyone’s behavior in this Mia-versus-Wendy situation.
disrespect the classics 10:59 a.m.
Bob Dylan Hopes to ‘Rectify’ Book-Signature Controversy ‘Immediately’ After Simon & Schuster offered refunds for $599 auto-signed editions of his new book.
snow jams 9:29 a.m.
The 50 Best Original Christmas Songs Since ‘All I Want for Christmas Is You’ Queen of Christmas, meet your disciples.
last night on late night Yesterday at 11:25 p.m.
John Mellencamp Has No Interest in Doing a Super Bowl Halftime Show He said so on WWHL.
chat room Yesterday at 10:05 p.m.
Leo Woodall Needed Some Time to Digest That White Lotus Reveal “I’d been told I might have a rumble and tumble with a couple of characters, but I didn’t know who.”
whodunnit? Yesterday at 10:03 p.m.
The White Lotus Kill or Be Killed Report: Two Can Keep a Secret Well, a couple of names just shot to the top of the suspect/victim list.
overnights Yesterday at 10:03 p.m.
The White Lotus Recap: Whoopsie As family secrets are being kept and revealed back at the resort, a new one is brewing in Palermo.
overnights Yesterday at 9:15 p.m.
Yellowstone Recap: As Good As Gone The dynamic between Jamie and Beth changes for the first time … ever?
overnights Yesterday at 9:00 p.m.
Dangerous Liaisons Recap: The Sex Dungeon The growing bromance between Camille and Valmont is delightful.
theater review Yesterday at 8:49 p.m.
KPOP Offers a Not-Actually-All-Access Pass A musical about making it big feels neutered by its own backstage process.
More Stories