For most of my 48 years, I have collected remnants and stories from the world of comedy. As a kid growing up in the ‘70s and ‘80s, I felt like a weirdo. An oddball. But the people who made me laugh helped me to feel that I wasn’t alone. This deeply personal relationship I have long felt to both the art form and the artists have informed my professional pursuits, first as a writer and a performer and later as a producer and a programmer. It has all been driven by an insatiable curiosity and quest for connection.

A few years ago, my journey led me to serve as a judge and unofficial consigliere to the Andy Kaufman Award show, an annual event honoring the legacy of the man I have long regarded as the first alternative comedian of the modern era. As a thank you for my help, Andy Kaufman’s kid brother Michael gifted me with a draft of a letter that Andy wrote to the president of his junior college in 1969 — a rare and wonderful artifact for my collection. Written on two lined pages, the letter was about a beloved teacher of Andy’s who mysteriously left his position at the school, and Andy was adamant in wanting to know why. With its many cross-outs and immature handwriting, it’s a unique glimpse at the earnestness with which Andy viewed the world. 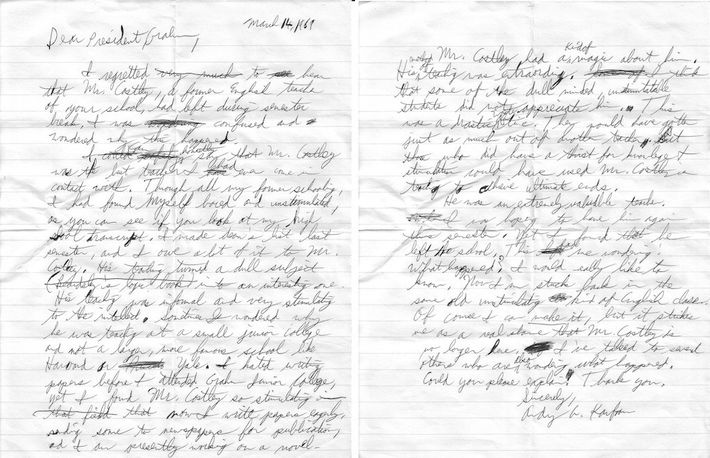 I regretted to hear that Mr. Costley, a former English teacher of your school, had left during semester break. I was confused and wondered why that happened.

I can honestly say that Mr. Costley was the best teacher I had ever come in contact with. Through all my former schooling, I had found myself bored and unstimulated, as you can see if you look at my high school transcript. I made dean’s list last semester, and I owe a lot of it to Mr. Costley. His teaching turned a dull subject into an interesting one. His teaching was informal and very stimulating to the intellect. Sometimes I wondered why he was teaching at a small junior college and not a larger, more famous school like Harvard or Yale. I hated writing papers before I attended Grahm Junior College, yet I found Mr. Costley so stimulating that I now write papers eagerly, sending some to newspapers for publication, and I am presently working on a novel.

Mr. Costley had a kind of magic about him. His method of teaching was extraordinary. I think that some of the dull minded, unstimulatable students did not appreciate him. This was a drastic waste of time. They would have gotten just as much out of another teacher. But those who did have a thirst for knowledge and stimulation could have used Mr. Costley’s teaching to achieve ultimate ends.

He was an extremely valuable teacher. I was hoping to have him again this semester. Yet I found that he left the school. This had me wondering what happened? I would really like to know. Now I’m stuck back in the same old unstimulating kind of English class. Of course I can make it, but it strikes me as a real shame that Mr. Costley is no longer here. I’ve talked to several others who are also wondering what happened. Can you please explain? Thank you.

I was beyond intrigued. The letter felt like a mystery that needed to be investigated and solved. Who was this “Mr. Costley?” I could not find any reference to him in anything that had been written about Kaufman and even his brother Michael couldn’t answer any of my many questions. So I set out to find him. And I did.

Bill Costley is now 74 and lives in Santa Clara, California. But in the late 1960s, the young Massachusetts native was living in Cambridge after graduating from Boston University. He was in his first semester teaching creative writing at Grahm Junior College when Milton Grahm suspected that “revolutionary missionaries” from BU had infiltrated his school. Although Bill always identified as a leftist, the extent of his activism was writing a letter on behalf of black students who wanted expanded access to the school library. Bill was accused of “inciting revolution” and was asked to resign his position. He never taught again as he thought he wasn’t a particularly good teacher. He focused on his writing and became a published poet. His political leanings remained as he shared how the radical group the Weathermen attempted to recruit him at one point. While that never came to fruition, his two children have followed in his footsteps. His daughter is a Buddhist and a socialist who recently worked for Bernie Sanders’ presidential campaign.

Bill Costley’s ongoing relationship with Andy turned out to be deeper and more important than I could have ever suspected. In the letter, Andy identifies Costley as the first teacher to connect with him. To inspire him. It was during his time at Grahm that Andy produced his first television program, Uncle Andy’s Funhouse, a kids’ show broadcast only on the college station. Andy asked Costley if his two children would take part and sit in the audience. Costley says that Andy also performed at his children’s birthday parties and frequently hung out at his apartment for hours at a time, where he often tested out new close-up magic tricks for Costley’s kids.

While Costley respected Andy as a student, he says he was mostly puzzled by his childlike behavior and described him as “strangely naïve.” We discussed how this naiveté was likely what informed the wide-eyed, lost qualities of Andy’s “Foreign Man” character, later to be known as Latka on Taxi. Costley also observed that Andy frequently “seemed to become different characters.” In his estimation there were “multiple Andys.”

Costley supported Andy’s burgeoning creativity unconditionally. In turn, Andy was diligent in maintaining contact through the years. After Andy famously performed his Mighty Mouse routine on the first episode of Saturday Night Live, he phoned his former professor the second he stepped off the stage to ask, “How did I do tonight, Mr. Costley?” He would do this after other TV appearances as well. Costley also recalls sending Andy a book from the 1930s on wrestling when Andy started down that path in his work and says that they would remain friends until the day Andy died.

In December, I traveled to Northern California and took Bill Costley to dinner. The humble and soft-spoken widower was reluctant to claim any meaningful impact on the life or work of Kaufman. But then I revealed the letter that started my journey to him. I had not told him that I had it and, as it turned out, he was not aware that it had even been written. He was, to put it mildly, visibly moved when I presented it to him.

Andy Kaufman remains one of the most legendary and yet enigmatic characters in the history of comedy. This letter opened a door behind which we get a rare look at the real Kaufman in his formative years. And Bill Costley is a character whose role, however small, seems significant. Kaufman’s work will continue to be examined, analyzed, interpreted, and many times misunderstood, but I can now see his humanity a little more clearly. He, too, was seeking connection. And in this relationship with a respected teacher, I believe Andy found something he needed, and perhaps Bill Costley’s encouragement helped to set him on a path to his artistic destiny.

Dan Pasternack is a comedy producer and programmer as well as a scribbler and superfan who loves alliterative couplets almost as much as he loves comedy.