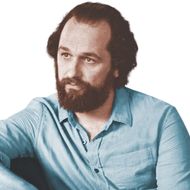 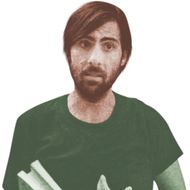 The Character: Philip Lewis Friedman (Jason Schwartzman)
Appeared In: Listen Up Philip
Author Bio: Stifled by his girlfriend, he moves in with his mentor, an older fake famous jackass novelist and thinly veiled Philip Roth (Jonathan Pryce).
Fake Book Titles: Join the Street Parade, Obidant.
What Makes This Author a Jackass: When a girl he picks up tries to make out with him in a bar, he scolds her for being “gauche.” Also he wears tweed suits.
Bearded? Yes.
Notable Quote: “If you were [a groupie], you would probably have read both of my books.”

The Character: Hank Moody (David Duchovny)
Appeared In: Californication
Author Bio: An alcoholic sex addict, he’s depressed after his latest novel is made into a commercially successful movie.
Fake Book Titles: South of Heaven, Seasons in the Abyss, God Hates Us All.
What Makes This Author a Jackass: Did you read those fake book titles? Also, he picks up a girl in a bookstore and only after sleeping with her realizes she’s the 16-year-old daughter of his ex-wife’s new partner.
Bearded? Just enough stubble to appear edgy.
Notable Quote: “I probably won’t go down in history, but I will go down on your sister.” 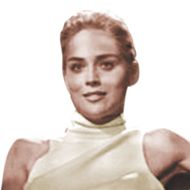 The Character: Catherine Tramell (Sharon Stone)
Appeared In: Basic Instinct
Author Bio: A beautiful, mysterious millionaire whose latest thriller’s plot mirrors a murder in which she’s also the prime suspect.
Fake Book Titles: The First Time, written under the name Catherine Smith; Love Hurts, under the name Catherine Adams.
What Makes This Author a Jackass: She writes books about murders then actually commits them. Also she eschews undergarments.
Bearded? No.
Notable Quote: “I’d have to be pretty stupid to … kill somebody the way I described it in my book.” 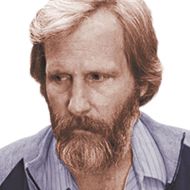 The Character: Bernard Berkman (Jeff Daniels)
Appeared In: The Squid and the Whale
Author Bio: An aging Park Slope professor, he’s too preoccupied with his ongoing writer’s block to spend any time with his sons.
Fake Book Titles: Watching the Unseen, End of the Line (“Mailer’s favorite of my books”), Underwater.
What Makes This Author a Jackass: His marriage to his third wife breaks up after she starts getting published. Meanwhile, he begins an affair with a college student who moves into his spare room.
Bearded? Yes.
Notable Quote: “I can lend you my first edition of The Naked and the Dead. As a present.” 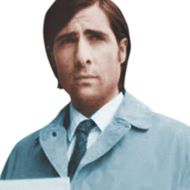 The Character: Jonathan Ames (Jason Schwartzman)
Appeared In: Bored to Death
Author Bio: An alcoholic pot-smoker living in Brooklyn, he posts an ad on Craigslist and becomes an amateur detective.
Fake Book Titles: A debut novel, I Pass Like Night — the same title as one by real-life Jonathan Ames, who created the series.
What Makes This Author a Jackass: He drives off his live-in girlfriend with his pot-smoking and paralyzing neuroses. He later confesses to his therapist that his father criticized him as a “mama’s boy.”
Bearded? No.
Notable Quote: “I’m like a Russian doll. There’s all these versions of me, in me.”