Plenty of stories play out Freudian archetypes, but very few of them have characters literally named Ego. Guardians of the Galaxy Vol. 2 is one such rare tale. The latest filmic entry in the Marvel Cinematic Universe features a new addition to the cast of characters: a sentient planet that goes by the moniker Ego, played by Kurt Russell. Wait, you may be thinking, Kurt Russell plays an entire planet? Is it a voice-acting CGI type of thing? Worry not, mere mortals, for we shall answer that question and many other Egotistical queries below.

So Kurt Russell plays an entire planet? Is it a voice-acting CGI type of thing?
Oddly enough, no! I mean, it’s a Marvel movie, so there are some CGI bits and Russell is involved in a few of them, but for the most part, he’s just walkin’ around in his real-life skin, grinning that rakish grin we all know and love.

But I thought you said he was a planet.
That I did! The deal is that he’s a godlike being who can take a number of shapes, including that of a planet and that of a human gent. He can be more or less whatever suits him.

Why would he want to look like a human, if he can just sit around being a sentient planet?
I’d tell you, but that would be a huge spoiler, and you know that’s not my style. However, since this is in the trailers, I can tell you that he’s the biological father of Chris Pratt’s character, Peter Quill.

What in the heck? So he can reproduce with Earth ladies?
Sure can.

Is that why he came to Earth? To steal our women?
No spoilers! I told you that!

Fine, fine. Did they make this character up for the movie?
Not exactly. Many of the details are new, but Ego has been kicking around in the world of comics for more than 50 years. He first appeared in a 1966 issue of Thor drawn by Jack Kirby and co-written by Kirby and Stan Lee. 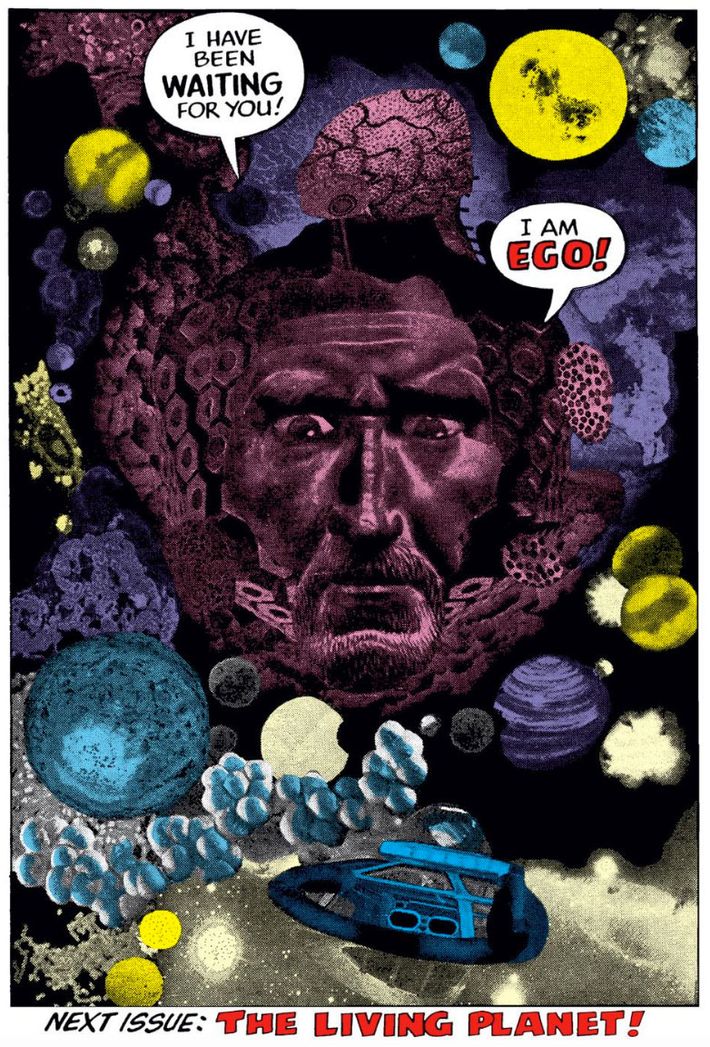 What was his deal there?
As is true in the movie, he was a godlike entity who could take on human and planetary form at will … with a beard. Kirby was a huge sci-fi nut and in that period, he was starting to dream big, coming up with weirder and weirder ideas. He later claimed that Ego was his idea — it’s always a huge matter of debate as to whether a given notion was Lee’s, Kirby’s, or a bit of both. In a 1969 interview, Kirby said he envisioned “a giant multiple virus, and if [it] remained isolated for millions and millions of years, it would … begin to evolve by itself and it would begin to think. By the time we reached it, it might be quite superior to us — and that was Ego.” No matter whose brainchild Ego was, he debuted in Thor No. 132, wherein, during a jaunt to deep space, our titular hero comes across the big fella trying to invade some alien lands. Thor tussles with him and he backs off. He did not bang any Earthwomen.

Did he show up a lot after that story?
Not a whole lot. He’s popped up here and there in Thor and Fantastic Four stories over the years, and played a major role in a reviled 2000 intergalactic crossover event called Maximum Security, but that’s about it. I mean, come on, it’s hard to work a sentient planet into your average, I dunno, Spider-Man story. The stakes and perspective get all out of whack.

I notice that you haven’t mentioned Peter Quill.
Correct! In the comics world, the two characters are wholly unrelated. Peter has a powerful dad there, too, but it’s J’son of Spartax, sovereign of a distant space empire. The parentage thing was a total invention for the movie.

And who’s that lady with the antennae played by Pom Klementieff? The one who’s following him around in the trailer?
That’s Mantis, a sort of alien telepath-type person who plays an important role in the story. No spoilers. She, too, is a comics character who’s been kicking around since 1973, but honestly, her comics version has virtually nothing to do with her movie depiction. In the comic books, she is a half-Vietnamese, half-German lady granted strange powers and best known for being the so-called Celestial Madonna, a being destined to give birth to a messiah figure who will change the universe. I won’t get into what she does in Guardians 2, but it’s definitely not that.

Do we get to see a planet-sized Kurt Russell?
Stop asking me for spoilers, or so help me God, I will turn this spaceship around.

Ugh. Okay, last question: Is Ego a superhero? Supervillain?
I’d argue that he’s not much of a super-anything. Sure, he has formidable abilities, but the entire Guardians of the Galaxy mini-franchise isn’t really a superhero franchise, per se. The characters all inhabit a milieu where the impossible is possible for just about everyone, meaning any given special power is just one of many and thus somewhat unremarkable. What you’re seeing in Ego is a character whose roots lie less in superhero comics than the underappreciated tradition of out-and-out sci-fi comics. Producer Kevin Feige and director James Gunn made a wise choice to put that genre into Marvel’s cinematic orbit.