On Friday, Carly Rae Jepsen released her song-of-the-summer submission “Cut to the Feeling,” a power-pop jam that’s classic Carly, appropriately ahead of Memorial Day weekend. But, as Shazam users on Reddit point out, Jepsen might have unknowingly revealed the title of her next album: Spread Love. This wouldn’t be the first time Shazam announced album details before its official release. Album art for Father John Misty’s Pure Comedy was visible on Shazam early, as were the album and song titles of the xx’s I See You. So you’re in good company, Carly Rae — if indeed the Spread Love leak is real. 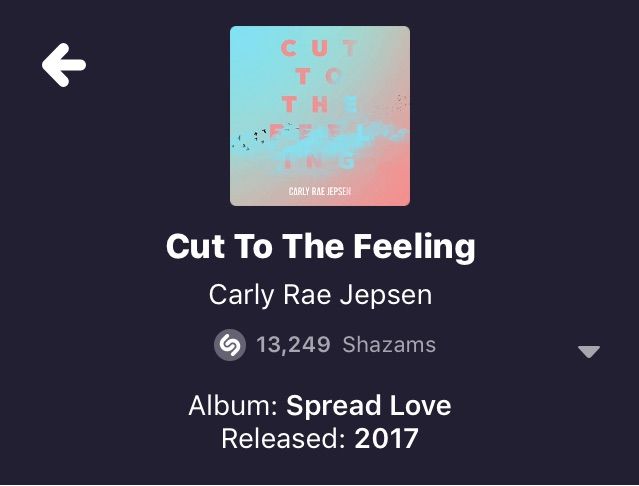 discrimination 27 mins ago
Gabrielle Union Files Harassment Charge Against America’s Got Talent Producers A statement from Union’s lawyer claims NBC Chairman threatened her not to speak out against racism on set of America’s Got Talent.
lost and found 4:55 p.m.
Finally, Some Joy: Someone Found Ben Affleck’s Secret Instagram His private account’s username is “positiveattitudehunting.”
vulture lists 4:12 p.m.
All the New Protest and Benefit Music Released in Response to Police Brutality Including songs from LL Cool J, cupcakKe, and Denzel Curry.
By Justin Curto
black lives matter 3:54 p.m.
Kanye West Gives $2 Mil to George Floyd, Breonna Taylor, Ahmaud Arbery Families He’s also covering legal fees for the Taylor and Arbery families.
remixes 3:35 p.m.
The DJ Who Remixed Cardi B’s ‘Coronavirus’ Is Back at It With ‘Lose Your Job’ “Get this dance.”
overnights 3:07 p.m.
Dirty John Season Premiere Recap: Hell Hath No Fury The new season kicks off with Betty Broderick’s tenuous grasp of reality on full display, alongside glimpses of what brought her to that point.
crime 1:47 p.m.
Jake Paul Charged With Criminal Trespassing After Filming Looters The YouTuber had denied looting an Arizona mall.
new york times 1:21 p.m.
New York Times Journalists Condemn Senator Tom Cotton’s Pro-Militarization Op-Ed Publisher A.G. Sulzberger has responded to the criticisms by saying he would hold listening sessions with black Times staff.
best of 2020 1:20 p.m.
The Best Albums of the Year (So Far) Fetch the Bolt Cutters might end up being the album that resembles 2020 the most.
By Craig Jenkins
(the) rock the vote 1:13 p.m.
The Rock Asks ‘Where Is Our Leader at This Time?’ in Impassioned Video “In this moment, we must say the words: Black Lives Matter.”
first person 1:00 p.m.
Our Brother Kaizen He would be called a murderer and a domestic terrorist. But to us, he was family. Our struggles with systemic racism growing up were the same.
By The Lucas Bros
protests 12:13 p.m.
John Boyega Delivers Emotional Speech Rallying Protestors in London Mark Hamill and Lucasfilm have now voiced their support.
now streaming 12:00 p.m.
The 100 Best Movies on Netflix Right Now Inside Man, Her, Uncut Gems, and more.
justice 10:34 a.m.
Beyoncé Wants YOU to ‘Remain Aligned and Focused’ on Justice “We know there is a long road ahead.”
commencement speeches 10:23 a.m.
Meghan Markle Addresses Black Lives Matter in High School Graduation Speech “I realized: The only wrong thing to say is to say nothing.”
quar goss 8:31 a.m.
Tavi Gevinson Tells Ivanka Trump’s Sis-in-Law Karlie Kloss to ‘Give It a Rest’ “Talk to your neo fascist friends.”
close reads 8:00 a.m.
What Is an Anti-Racist Reading List For? It is unclear whether each book supplies a portion of the holistic racial puzzle or are intended as revelatory islands in and of themselves.
By Lauren Michele Jackson
deaths 2:33 a.m.
Dream Street Band Member Chris Trousdale Dead At 34 His former bandmate, Jesse McCartney, claimed on Instagram that Trousdale died due to complications from COVID-19.
vulture sports 1:38 a.m.
Drew Brees Called Out by Teammate and Other Athletes for Comments About the Flag He has now apologized, saying: “I made comments that were insensitive and completely missed the mark.”
overnights Yesterday at 10:27 p.m.
The Real Housewives of Beverly Hills Recap: Children Will Listen Denise’s husband Aaron needs to take a seat and let these women do their jobs.
More Stories