This is one of the year’s best lineups. Photo: Dave Kotinsky/Getty Images for Spike

It’s not Brooklyn, but close enough. After an inaugural year that saw Kanye West flee his headlining set to rush to Kim Kardashian after she was robbed at gunpoint in Paris, the Meadows Festival will look to rebound in a big way this year. For 2017, the Queens festival has expanded to three days and booked one helluva lineup — possibly the best New York City has to offer this festival season — with none other than Jay Z set to headline. Also topping the bill are Gorillaz and Red Hot Chili Peppers. But this is one festival where you’ll want to read all the way down to the fine print: Playing Meadows this year are Nas, M.I.A., Run the Jewels, Future, Weezer, LL Cool J (!), Erykah Badu, and Migos, and that’s only the first couple lines. Meadows will be Jay Z’s first NYC festival appearance since he headlined the 2014 Global Citizens Festival. It’ll all go down September 15–17, hopefully well after the twins are due so Hov won’t also have a family emergency to tend to mid-set. 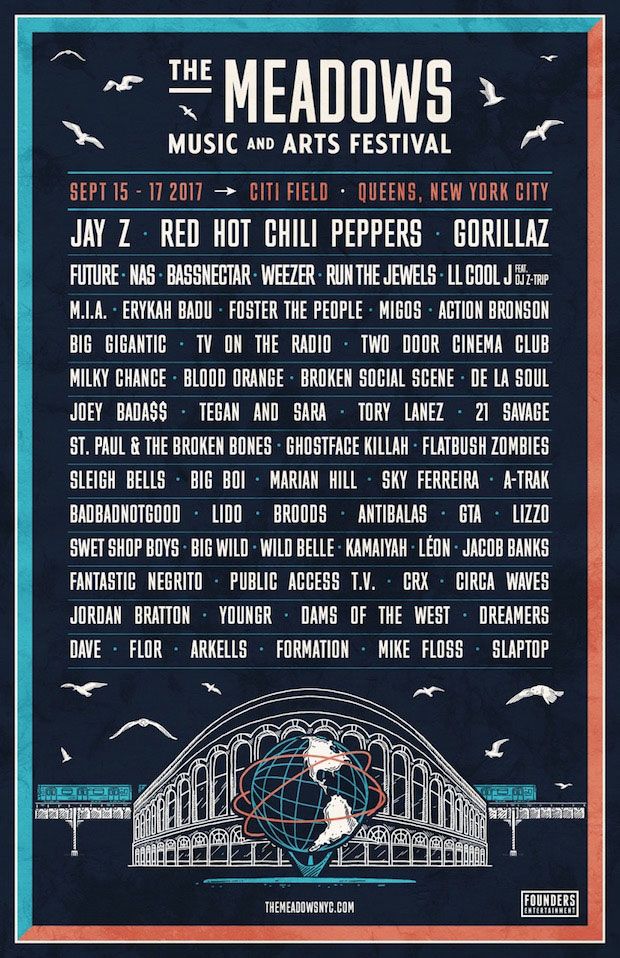 awards 10 mins ago
Hanif Abdurraqib Is One of This Year’s MacArthur ‘Genius’ Grant Recipients Along with Ibram X. Kendi, Keeanga-Yamahtta Taylor, Don Mee Choi, and more.
sorry about venom 12:01 p.m.
I’m Sorry, But We Must Talk About ‘I’m Sorry About Venom’ In celebration of Michelle Williams’s best line in Venom.
overnights 12:00 p.m.
Only Murders in the Building Recap: Shine On A truly inspiring episode answers nearly all the questions remaining from the night Zoe died.
the music man 11:37 a.m.
A Trump Aide Would Play ‘Memory’ When He Needed to Calm Down Yes, the Cats song.
trailer mix 11:11 a.m.
Watch the Trailer for Phoebe Robinson’s Sorry, Harriet Tubman Comedy Special She’s just happy to get out of the house.
respect the classics 10:30 a.m.
Swing and Cry Along to the Rolling Stones’ Charlie Watts Tour Tribute And the crowd goes wild.
decline of western civilization 10:00 a.m.
Penelope Spheeris on The Decline of Western Civilization The director reflects on her documentary’s long-lasting impact, 40 years later.
trailer mix 9:51 a.m.
The Harder They Fall Trailer: Shoot ’Em Up Style (Oops!) Regina King, Idris Elba, LaKeith Stanfield, and more star in Jeymes Samuel’s new Western, on Netflix November 3.
last night on late night 9:30 a.m.
Jon Stewart Has Some Eccentric Opinions About Sea Life “You know what I just realized? I’m just a crazy old man off the street.”
behind the scenes 9:00 a.m.
Behind The Eyes of Tammy Faye’s Tammy Faye-est Looks The squad who turned Jessica Chastain into a televangelist superstar go deep on the prosthetics, the wigs, and the discontinued makeup.
By Tomris Laffly
q&a 6:00 a.m.
Billy Eichner and Cobie Smulders Enter Stage Right The stars of Impeachment: American Crime Story on playing Matt Drudge and Ann Coulter, side characters who’d love to control the narrative.
By Olivia Nuzzi
celebrity breakups Yesterday at 11:10 p.m.
Miguel and Nazanin Mandi Split After 17 Years Together The couple have been separated “for some time now.”
overnights Yesterday at 9:50 p.m.
90 Day Fiancé: The Other Way Recap: Hitchhikin’ Steven It’s more apparent than ever that some of these couples aren’t going to make it much longer.
bachelor nation Yesterday at 7:55 p.m.
The Bachelorette’s Clare Crawley and Dale Moss Call It Quits … Again “For good this time.”
housewives institute bulletin Yesterday at 5:56 p.m.
There Is Nothing Wrong With Twinks, Meredith Between RHOSLC and RHOP, it’s a big moment for Housewives deploying the “ammunition argument.”
the law Yesterday at 5:52 p.m.
Britney Spears Responds to NYT Allegations, Calls for Jamie’s Immediate Removal After her attorney made a new filing, Britney responded to the doc on Instagram.
vulture lists Yesterday at 5:30 p.m.
Every Melissa McCarthy Movie, Ranked McCarthy hasn’t always found material worthy of her talents, but she always tackles it with gusto.
By Will Leitch and Tim Grierson
respect the classics Yesterday at 5:10 p.m.
Bob Dylan Making Tour Plans Until 2024 Is More Shocking Than His Going Electric The man is 80!
horny Yesterday at 5:08 p.m.
Ranking the New Succession Posters by How Much They Have Ruined My Day This is a psyops against Successionators.
vulture recommends Yesterday at 5:03 p.m.
Please Watch the Unfiltered Joy Machine That Is The Goes Wrong Show The second season premieres on September 27.
More Stories