You’ve looked over the slate of summer 2017’s blockbuster movies. “So many sequels!” you may have cried. “So many remakes!” If so, this is the summer preview for you. Below, find a collection of the season’s most anticipated original films — in other words, movies that are not sequels, reboots, or remakes. Many of them may be smaller than the tentpoles, but our love for them is just as large.

War Machine (May 26)
Brad Pitt teams with Australian filmmaker David Michôd to tell the story of disgraced American general Stanley McChrystal — excuse me, a thinly veiled version of Stanley McChrystal named Glenn McMahon. Based on the late journalist Michael Hastings’s book The Operators, this Netflix film should provide both your regularly scheduled dose of Military Man Brad Pitt and a sure-to-be sharp-tongued look at the American effort in the Middle East, courtesy of the man behind such lighthearted romps as Animal Kingdom (a movie about a family of brutal Australian gangsters) and The Rover (a movie about Guy Pearce and Robert Pattinson wandering through a dystopian wasteland). —Kevin Lincoln

Band Aid (June 2)
One of the standouts at this year’s Sundance Film Festival, writer-director Zoe Lister-Jones — you might know her from CBS’s Life in Pieces — has a great hook: A couple, played by Lister-Jones and Adam Pally, can’t stop fighting, so they decide to turn their fights into songs, aided by their sex-addict neighbor (Fred Armisen) on drums. But this is more than just your average indie dramedy — working with an all-female crew, Lister-Jones delivers an emotionally sophisticated, remarkably touching, and, notably, hilarious portrait of an urban couple stuck for reasons they’re only beginning to understand. Also: The songs are killer. –Kevin Lincoln

Beatriz at Dinner (June 9)
In the Trump era, every movie feels like it’s about the Trump era, but Beatriz at Dinner, like, really seems to be about the Trump era: A healer, played by Salma Hayek, takes part in a dinner at the home of a wealthy client who, let’s just say, didn’t get rich off being a nice guy. Conflict ensues, courtesy of writer Mike White and director Miguel Arteta — the minds behind HBO’s Enlightened, one of the best shows in recent memory — plus a knockout cast that includes John Lithgow, Chloë Sevigny, Connie Britton, Amy Landecker, Jay Duplass, and John Early. —Kevin Lincoln

It Comes at Night (June 9)
Trey Edward Shults made his directorial debut in 2015 with the quietly great Krisha, and he’ll deliver his follow-up effort with this mystery-horror film. A man and his family have established a secure hold after Earth is menaced by some unnatural terror, but their status quo is threatened when a desperate family shows up seeking a safe haven. Joel Edgerton gets back into thriller mode, and the ever-intense Riley Keough co-stars in what looks to be a white-knuckle story of survival in extremely desperate circumstances. —Jordan Crucchiola

All Eyez on Me (June 16)
After the success of Straight Outta Compton, it’s Tupac Shakur’s turn to get a musical biopic, with newcomer Demetrius Shipp Jr. landing the plum role. (Jamal Woolard, who starred in the Biggie Smalls biopic Notorious, will reprise that part here.) The film seems like it will focus on Tupac’s relationship with the Black Power movement, as well as the East Coast–West Coast rap war. —Nate Jones

The Big Sick (June 23)
Silicon Valley’s Kumail Nanjiani stars in this autobiographical rom-com about a couple whose fledgling relationship is put on the rocks by cultural differences and also a coma. Nearly everyone who saw The Big Sick at Sundance loved it, and while the judgement of the Park City crowd has never been infallible, this small, sweet movie seems like perfect summer counterprogramming. —Nate Jones

The Bad Batch (June 23)
Bad Batch is less a movie than a trip into the theater of director Ana Lily Amirpour’s mind. Imagine a twisted, listless desert dystopia with the occasional rave and some cannibalism, too. Lead actress Suki Waterhouse fully commits after her character becomes a double amputee just minutes into the movie, and while Jason Momoa barely says a word, he’s shirtless the entire time, which is excellent. And you’d also be hard-pressed to find better use of Culture Club’s “Karma Chameleon” in any movie. —Jordan Crucchiola

Baby Driver (June 28)
Depending on who you are, the phrase “starring Ansel Elgort” may be a deal-breaker, but perhaps “Drive, but by Edgar Wright” will sway you back into Baby Driver’s corner. Elgort plays a getaway driver with tinnitus who wears one earbud at all times. (It’s blasting music to drown out the ringing.) People who’ve seen it say there’s rarely been a more perfect blend of action and visuals. —Nate Jones

Okja (June 28)
Bong Joon-ho’s Snowpiercer follow-up sounds just as lovably bonkers: It’s about a young Korean girl who befriends a magical beast named Okja, and then must rescue it after it’s captured by a gigantic corporation headed by Tilda Swinton. (Jake Gyllenhaal’s here too, as a TV-personality zoologist.) Netflix is releasing a lot of movies this year, but this is a safe bet to be the weirdest. —Nate Jones

The House (June 30)
How has it taken so long for Amy Poehler and Will Ferrell to team up in their own comedy? The two ex–Saturday Night Live stars play parents who break bad in this film, setting up a basement casino to raise funds for their daughter’s college education, then finding that they really dig their illicit new side hustle. That’s the plot, but all you really need to know is that the trailer prominently features Poehler in an evening gown wielding a flamethrower. Sold. —Kyle Buchanan

Patti Cake$ (July 7)
This shamelessly crowd-pleasing Sundance hit follows an overweight white girl (Danielle Macdonald) whose rap skills no one takes seriously, least of all her dissipated mother (Bridget Everett). But wouldn’t you know, there’s a big rap contest on the horizon, and our girl Patti might be able to finagle herself a spot. Will she impress the judges and somehow win her wary mom to her side? If you’ve seen a movie before, I want you to guess. —Kyle Buchanan

Girls Trip (July 21)
With this and Rough Night, girls behaving badly are having a good year, but Trip has two big advantages over its sister film: Queen Latifah and Jada Pinkett-Smith. If there was one thing to take away from Magic Mike XXL (besides that tWitch should be shirtless whenever he’s on camera), it’s that Jada Pinkett-Smith is an underutilized talent. Put her back together with her Set It Off co-star, and you have summer popcorn material. Hell, bring Champagne to the theater with you. —Jordan Crucchiola

Ingrid Goes West (August 11)
If the idea of Single White Female updated for the social-media age sounds like a dream come true, then Matt Spicer’s feature debut should be your movie of the summer. Aubrey Plaza is Ingrid, a woman who takes Instagram stalking to vertiginous new heights. As she ingratiates herself into the life of the seemingly perfect Taylor Sloane (Elizabeth Olsen), a game of wait and see ensues: Just how, and how badly, will Ingrid’s loosely held-together web of lies fall apart? The answer involves O’Shea Jackson, Jr., Billy Magnussen, Wyatt Russell, Palm Springs, and a whole lot of digital ennui. —Kevin Lincoln

Wind River (August 18)
With the one-two punch of Sicario and Hell or High Water, Taylor Sheridan quickly became one of the premier scribes in Hollywood, and Wind River is his attempt to do the same as a director. Jeremy Renner and Elizabeth Olsen play a tracker and an FBI agent trying to solve the murder of a young woman, but as you might expect from Sheridan, it’s about much more than that, taking on the subjects of Native American reservations and the energy industry as well. Expect a lot of snow, a lot of guns, and some thorny moral dilemmas. —Kevin Lincoln 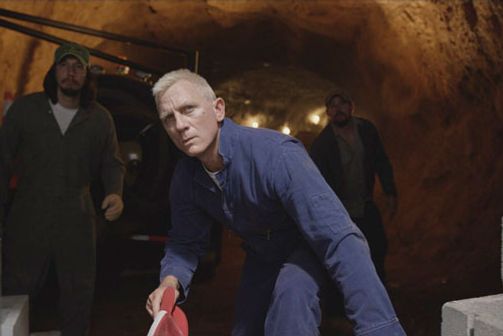 Logan Lucky (August 18)
Rumors of Steven Soderbergh’s retirement were greatly exaggerated. After taking a few years off from the movie business, the director returns for this NASCAR heist comedy, and he’s got Daniel Craig, Adam Driver, and Channing Tatum in tow. Get excited: With the possible exception of the Coens, no one does brilliant dumbness like Soderbergh. —Nate Jones

Vulture’s Guide to the Would-be Blockbusters of Summer 2017

+Comments Leave a Comment
16 Summer Movies That Are Not Sequels, Reboots, or Remakes