Starting tonight, PBS will air a new season of The Great British Baking Show, referred to anywhere but America as The Great British Bake Off. This is the final season with judges Mary Berry, Mel Giedroyc, and Sue Perkins, who are not going to Bake Off’s new network — the new judging lineup (with noted traitor Paul Hollywood), however, is already in full swing overseas. (PBS has always been delayed airing Bake Off’s original episodes, and because of it, season four of the show is only making its way Stateside now.) Will a spunky but lacking-in-confidence baker like Ruby emerge once again? What about one with magnificent attention to presentation, like our girl Frances? Read on for all of the quintessentially British information about your new class of amateur bakers.

Jane
“When Jane is not in her Wellies knee-deep in mud, she’s donning her leopard-print apron in the kitchen. Jane will be up at 5 a.m. most mornings getting her bread in the oven, but her favorite time to bake is on the weekend.” 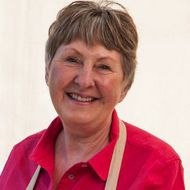 Val
“In her spare time, Val loves to exercise and can often be found doing aerobics in her kitchen whilst she waits for her jam to boil or her bread to prove.”


Andrew
“Andrew is originally from Northern Ireland, but currently lives with three friends in Derby, where he works as an aerospace engineer for Rolls-Royce, designing jet engines.”


Candice
“She loves everything vintage, and though she usually bakes in her pj’s, she has been known to break in a new pair of heels whilst baking, too.”

Kate
“As well as her everyday family baking, Kate will work through the night to produce flawless sugar craft creations, and although she always strives for perfection, if something does go wrong she will always try to maintain her bright and cheery disposition.”

Lee
“He has worked in various pastoral ministries for the past 30 years, and most recently as the pastor of a local church in Bolton, where he lives. Lee started baking in 1984 when he injured his back playing cricket with his young son.”

Louise
“When she’s not baking for family and friends, she loves being outdoors and has completed various mountain walks, most notably a four-day trek around the Andes.”


Michael
“He’s been making Greek pastries with his nan since he was a small boy. When he’s not playing for his college football team, he’s whipping up cakes. But he admits it’s not easy in a house full of students.”


Rav
“Rav is adventurous and experimental with his baking, and likes to use a whole range of unusual ingredients. He thinks he has a good sense of flavor combinations, even if they might seem strange to others.”


Selasi
“He works long hours, but always finds time to bake, and colleagues are often shocked by the delicate cupcakes he makes for their charity bake sales. Outside of baking, Selasi enjoys playing basketball, traveling, and motorbikes, taking to the open road with his mates in his own ‘Sunday Motorbike Club.’”

Tom
“He always finds time to bake, and if he feels that he doesn’t, then he will sit down and reevaluate, as it means his work-life balance is off.”


Benjamina
“She was a straight-A student throughout her time at school and aims just as highly in her baking, so she isn’t happy when things don’t turn out picture-perfect.”

overnights 9 mins ago
Power Book II: Ghost Recap: No Loose Ends Arguments and hard lessons galore.
blabbermouths 12 mins ago
Is Brian Cox Allowed to Be Saying All This? L-to-the-O-G off, Brian.
feuds 6:43 p.m.
Jonah Hill Ends Longstanding Feud with Baby Yoda Our long national nightmare is over.
family feuds 4:00 p.m.
Oops … Britney and Jamie Lynn Spears Are Fighting Again Britney brought their argument over Jamie Lynn’s memoir into day two.
🐝 buzz buzz 🐝 3:58 p.m.
‘You Can Write Those Kinds of Dynamics Forever’ Showtime’s president of entertainment on setting up the series for success, its multi-season plan, and when to expect the next installment.
overnights 2:19 p.m.
Saturday Night Live Recap: Ariana DeBose Gives the Season a Jolt Ariana DeBose has tremendous chemistry with the cast and gives one of the season’s best performances.
tv 2:03 p.m.
Gentefied Co-Creator Linda Yvette Chávez Reacts to Show’s Cancellation “Metrics and algorithms will never measure the true impact of what we did here.”
snl 1:35 a.m.
Will Forte to Host SNL Next Week With musical guests Måneskin.
totally bugging Yesterday at 6:30 p.m.
Melanie Lynskey’s Yellowjackets Co-stars Defended Her on Set Juliette Lewis wrote a letter to producers on Lynskey’s behalf.
extremely online Yesterday at 5:32 p.m.
YouTubers React to Netflix’s Hype House No one can analyze content creation better than those who make it.
deep dive Yesterday at 12:59 p.m.
Wait, Who Are the Eternals? The 2021 MCU entry is finally streaming on Disney+. Here’s what you need to know before hitting play.
movies Yesterday at 1:38 a.m.
Nicole Kidman Addresses Her AMC Theatres Commercial: ‘It’s So True’ She believes that somehow heartbreak does feel good in a place like this.
my single is dropping Yesterday at 12:26 a.m.
Ye Eases Us Into His New Song ‘Eazy’ Featuring the Game and a dig at Pete Davidson.
overnights Jan. 14, 2022
RuPaul’s Drag Race Recap: Jorgeous Jorgeous Girls Love Drag Another premiere, another talent show, another front-runner.
back on track Jan. 14, 2022
Black Panther: Wakanda Forever Resumes Production With Letitia Wright The actress has recovered from the on-set injury she suffered last year.
controversy Jan. 14, 2022
270 Medical Professionals Send Open Letter in Response to Joe Rogan Episode The podcaster is driving another round of unsurprising headlines.
movie review Jan. 14, 2022
Do You Need a Review of Hotel Transylvania: Transformania? Here’s One Anyway. As a wise man once said, “Bleh, bleh, bleh.”
By Bilge Ebiri
the law Jan. 14, 2022
After 29 Days, Alec Baldwin Turns Over His Phone in Rust Investigation Nearly a month after Baldwin addressed the warrant on Twitter.
movie review Jan. 14, 2022
Belle Is a Spectacular Retelling of Beauty and the Beast by Way of the Metaverse Mamoru Hosoda’s new film deftly blends teen angst, fairy-tale fantasy, and a virtual online world.
By Alison Willmore
cheer-splainer Jan. 14, 2022
How Does Cheer Season Two Address All the Controversy? Here’s how the Netflix series handles the drama surrounding season-one favorites Jerry Harris and La’Darius Marshall.
More Stories