Depending on whom you ask, the big reveal in Pretty Little Liars’ series finale was either annoyingly obvious or a complete shock. Spencer Hastings’s evil British twin, Alex Drake, was revealed to be “A.D.,” stemming from a bonkers family history that culminated in Alex wanting to avenge the death of her half-sister, Charlotte DiLaurentis, and to permanently take over Spencer’s life. While unpacking this revelation during the finale, PLL threw us even more of a curveball by divulging that Alex had already pretended to be Spencer — and successfully, at that! — as she honed her long con. When did those moments of deception happen? Let’s go through them all chronologically, paying close attention to what was said and how Alex managed to pull it off.

Hanna’s “dream” while she was kidnapped in the shed 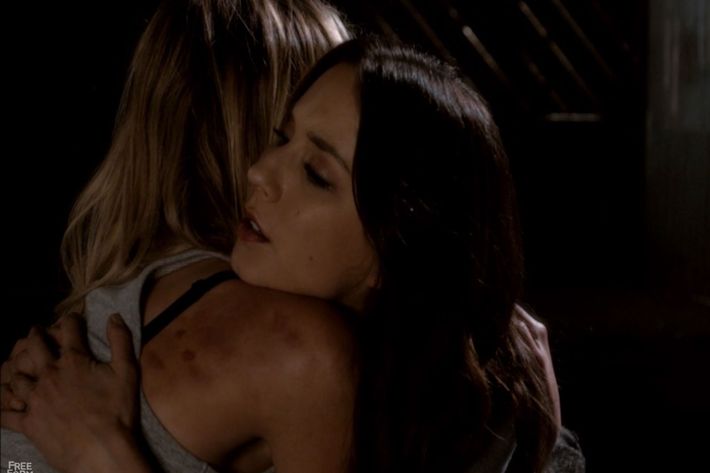 PLL certainly loved dreamlike sequences throughout its 160 episodes — we’ll always remember how Alison appeared in all those “dreams” to the various Liars before turning up alive — and there was something about Hanna’s dream while she was kidnapped and tortured that seemed a little off. Maybe it was the lack of bangs on Spencer’s head, which she had been rocking for half a season, or the reference to the Liars’ tormentor as “A.D.” for the very first time, before “A.D.” herself even used the name. Either way, the confident bravado of the Spencer whom we know and love was lacking. “You’ve got this, Hanna, you’re gonna be okay,” she flatly tells Hanna. “I think I’m gonna die in here,” Hanna responds. “I won’t let that happen,” she affirms.

When a dialogue-free Spencer suddenly became wistful about Hastings family photos in a sudden deviation from the plot, it seemed like an unusual moment to dedicate 30 seconds of airtime to. What is this, sweeping hair at the Roadhouse?

Despite Spoby shippers living for Spencer’s daring smooch with Toby before he packed up and headed north with Yvonne for good, fans realized that the personality dissonance in the scene didn’t match Spencer’s usual self. She was accepting of Toby and Yvonne as a couple, but she would also be so brazen as to demand one last kiss from him “just to say good-bye”? After a particularly poignant monologue about Toby finally finding happiness? “So you thought you could leave without saying good-bye?” she explains, handing him a copy of Anthologie des poètes du XIX e Siècle that was supposedly on her nightstand. “I wanted you to have it. I’m really, really happy for you, Toby. You deserve love. You deserve that kind of great, big, beautiful love more than anyone else I know.” Flash-forward to a year later, when Toby realizes that the book of poetry didn’t actually come from Spencer: She would never not fill the pages in with her own scribbles, but this book was devoid of any customized messages.

Wren and “Spencer” seeing Ezra at the airport

This scene stoked the twin-theory fire more than ever, with three key points emerging. (1) Spencer’s hair is straighter and has more defined highlights. (2) Spencer was just seen at the Lost Woods Resort with Marco in the scene prior, making it highly unlikely that she could transport herself from the outskirts of Rosewood to the Philadelphia International Airport in a short amount of time. (3) Wren, a fan favorite who hadn’t been seen in about three years, barely got in a line of dialogue after exchanging pleasantries with Ezra. Why would you bring that beautiful man back only to waste his talents?

“I have to ask you a favor. I haven’t seen Wren since before Charlotte was killed, and he helped her sneak into Radley, and I wanted to see if he remembered something that would help us, but so far it’s been nothing,” Spencer explains to Ezra. “Do you think we can keep this between us?” Of course, we later find out that the explanation is a lie and the meeting was actually between Alex and her lover, Wren, who tried to convince her to stop playing the game and to make peace with Charlotte’s death. “Those bitches took her away from me, and now they’re getting everything that they deserve,” she says. “I’m honoring her, don’t you get that?” “I get everything about you,” Wren responds. “But I miss you, and I miss us.”

This was a very close call. Spencer, displaying the unusually aggressive side that was on display when she previously kissed Toby, takes off her clothes while paying him a visit at his cabin to have sex. The scar from Spencer’s bullet wound on her chest is prominently displayed … but not so fast, people. During a flashback in the finale, we witness Alex forcing Wren to shoot her in the chest in order to replicate the bullet scar in some bizarre Tarantino-ized Parent Trap scenario, making sure she fully embodies Spencer before taking her place. “What’s going to happen is going to happen,” Spencer purrs while in the cabin. “That doesn’t sound like the Spencer I know,” Toby responds, perhaps a little too on-the-nose. “It always seems like we’re saying good-bye,” Spencer continues. “Do you remember that kiss we shared? That was nice, wasn’t it.” Sexy times ensue.