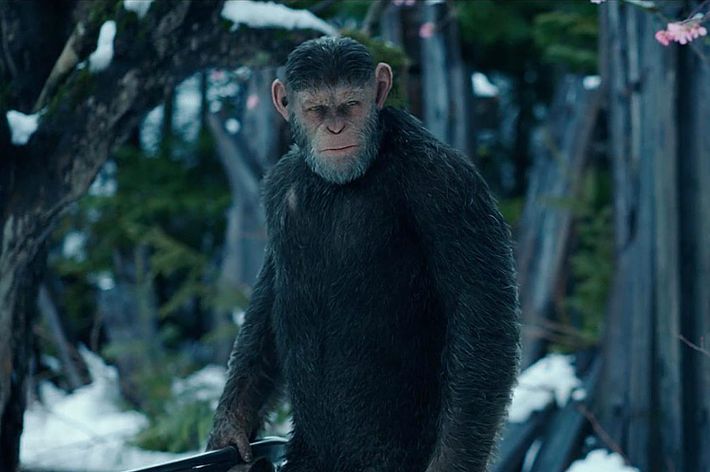 Woah, there’s another. Probably should’ve warned you that they’d be coming at you fast, not unlike life in the Planet of the Apes universe. But now we’ll take a break for a history lesson. Did you know the “Caesar” haircut was named after Julius Caesar, a Roman general who, just like Caesar in the Apes movies, was a beloved leader? Anyway, here’s another picture of Caesar if he had the haircut of the other Caesar: 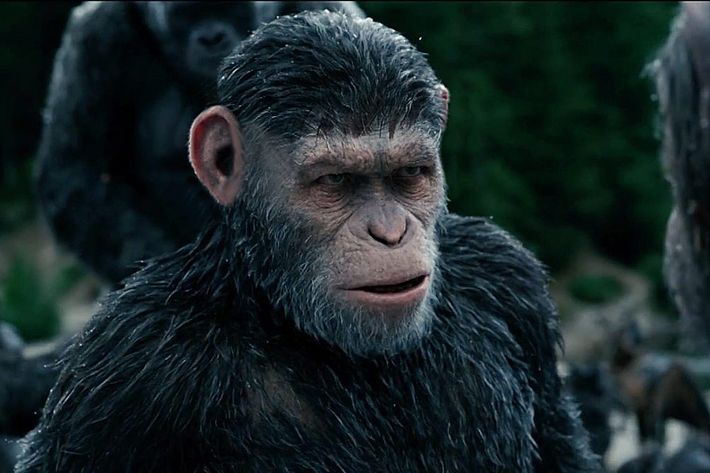 I know what you’re thinking: No, this post is not sponsored content for CNN’s The Nineties, airing Sundays at 9 p.m. Though I admire your skepticism and knowledge of the ’90s. It was a crazy time, the American ’90s: Friends was the name of the only TV show, TVs were your only friends, and we all learned there was such a thing as oral sex. Oh, and it featured a resurgence of Julius’s signature ’do. At this point, I should note for the rest of the pictures we literally just photoshopped George Clooney’s hair onto Caesar, the talking ape with a heart of gold. See:

Doesn’t that hair look good? (Four down. Two to go.) Doesn’t that hair say, “People loved me in E.R., but it took a string of box-office bombs for my film career to really take off with Out of Sight?”

Ah, gotcha! That was a surprise one. Sorry, I punked you. Though, you should have expected it. So, are you ready for it to be over? Have you resisted the temptation of putting your thumb on the screen (assuming you’re “reading” this on a “phone”; don’t smudge your laptop screen) and sliding this baby up, just a little, baby? No, you haven’t? You scrolled already? You scrolled through all the images first and then wondered to yourself, What could he possibly have written between these pictures of Caesar — the resolute albeit riddled with self-doubt leader of Northern California’s intelligent ape population — with a Caesar haircut? I guess I’ll just look. It’s Friday.

sequelitis 2 mins ago
Disney Working on Sequels to Frozen, Toy Story, and Zootopia Bob Chapek’s plan to stop Disney from going broke? Sequels, baby.
grammys 2023 6:04 p.m.
Dee Barnes Thinks It’s a Choice to Name Grammy Award After Dr. Dre “They named this award after an abuser … you might as well call it the ‘Ike Turner Award.’”
everyone gets a turn 6:00 p.m.
The Daily Show Sets Its Second Slate of Guest Hosts Hasan Minhaj, Marlon Wayans, Kal Penn, Al Franken, and John Leguizamo take the show into April.
yawn solo 5:33 p.m.
Harrison Ford Isn’t Anxious. You’re Just Boring. In a searingly honest confessional, the 80-year-old actor came out … as not having social anxiety.
coming soon 4:40 p.m.
Owen Wilson Is (But Isn’t) Bob Ross in Paint If it looks like Bob Ross, walks like Bob Ross, and paints like Bob Ross, it’s Owen Wilson in the Paint trailer.
trailer mix 3:36 p.m.
Hungry Guys Will Be Treated to Some Movie Trailers at the Super Bowl No time for Totino’s when the Scream VI trailer is premiering
explainers 3:10 p.m.
What the Great Netflix Password Crackdown Means for You Let’s talk about it.
vulture lists 2:00 p.m.
15 Great Valentine’s Day TV Episodes You Can Stream Right Now Parks and Rec, New Girl, Friends, and more.
america has a problem 1:35 p.m.
The Beyhive Slashed Its Ivy Park Budget by 50 Percent New reports suggest people were saving for Beyoncé tickets instead of buying her streetwear.
you are getting sleepy 1:00 p.m.
Joe Pera, the Sleep King Talking to the comedian and his collaborator Ryan Dann about their new podcast, writing songs, and being slow.
improv 12:47 p.m.
Colin Mochrie Reflects on Over 30 Years of Whose Line Is It Anyway? “The short answer is, as of now, this is the last season with this cast.”
By Caitlin Wolper
vulture 10x10 12:12 p.m.
The Louboutin Puzzle 30-Across, Five Letters: Movie with Space Jockeys
hbo axe'd 12:05 p.m.
Looks Like Discovery+ Doesn’t Need HBO Max After All The combined service is still coming, but one streamer gets to stand apart.
ftw 11:35 a.m.
The Late Late Show to Be Replaced by Reboot of @midnight Stephen Colbert will executive-produce a reboot of the Comedy Central game show.
househusbands 11:24 a.m.
The Types of Men You Find on Real Housewives In the Bravo-verse, the men have their own special status.
what happened here 10:36 a.m.
A Breakdown of Armie Hammer Allegations, Controversies, and Time-share Drama Elizabeth Chambers says she learned about the allegations against her estranged husband as the public did.
buyer & bookseller 10:10 a.m.
Barbra Streisand Will (Yen)Tell Us About Her Life In My Name Is Barbra, her 1,040-page memoir.
exit interview 8:00 a.m.
Steven Soderbergh Can’t Quit Magic Mike He says there was “no compelling reason” to make a third movie, and then Channing Tatum’s live show happened.
By Matt Zoller Seitz
overnights 6:01 a.m.
The Bad Batch Recap: City of Walls and Secrets The Bad Batch’s two-part political thriller ranks up there with some of the best The Clone Wars ever did.
music feuds 2:12 a.m.
Pink Floyd Continues to Battle Over the Russian Invasion of Ukraine Roger Waters is accused of being antisemitic and pro-Putin by his bandmates.
More Stories