“When you are writing a novel, you are always trying to submerge yourself in a dream state, and New York was constantly waking me up from that state,” says Danzy Senna. She’s sitting outdoors at a shady café in South Pasadena, California, roughly 2,400 miles from Brooklyn, where she once lived and from which she drew inspiration for her propulsive new novel, New People.

South Pasadena, the sweet and sleepy town where we both currently reside, is not Brooklyn — it’s more like a Southern California hallucination of Mayberry. Its leafy streets and Craftsman houses regularly stand in for a middle-American idyll in movies, TV shows, and commercials. (The swaying palm trees reliably get cropped out of the frame.) Suburban L.A.’s low-stimulus environment has proved far more conducive to Senna’s writing than the boho hyperactivity of New York. Senna is the 46-year-old author of five books, including her celebrated 1998 debut novel, Caucasia, and all of her work explores the nuances of being mixed race in America with stinging humor and acuity. But, in some ways, “the central identity conflict in my life has been New York versus L.A.,” she says. “I became an author in New York, but it was like a book party that never ended. I became someone who had written something once. In Brooklyn, I’d walk out my door and bump into someone at seven in the morning at the dog park who would tell me about their six-figure book advance.” Los Angeles, by comparison, she jokes, is “so boring that your imagination becomes your life.”

Senna is the child of two writers — poet and novelist Fanny Howe, who is Irish-American, and Afro-Mexican editor and academic Carl Senna — whose marriage caused a societal sensation. A 1969 Boston Sunday Globe feature written shortly before Danzy was born spun a romantic vision of her parents; it portrayed them as “an interracial couple out of a dream,” as she later wrote. Yet within seven years of that article, they had acrimoniously split. Danzy grew up in Boston with her mother and two siblings, and her father lived nearby for a time; she divided her days between the two households. Her childhood was steeped in African-American culture even as her pale skin and straight brown hair convinced the world she was white.

“The weariness of having to explain yourself to people is almost like having a grandmother with Alzheimer’s,” she says quietly. Your body doesn’t fit people’s idea of who you are, so “you have to introduce yourself every time you go in the room.” As she writes in her memoir, Where Did You Sleep Last Night?, her father was determined “to hammer racial consciousness home to his three light-skinned children.” The heroine of Caucasia is a mixed-race girl who similarly grapples with the chasm between other people’s impressions of her and her own sense of blackness. The novel propelled Senna to literary cult stardom. She found the attention both thrilling and oppressive.

“I got framed as the first non-tragic mulatto,” she says, her mouth twisting into a smile. “I remember thinking, If you are being heralded for writing triumphant and positive representations of mixed-race characters, how do you ever write another book? Nobody wants to read about happy characters!” She wrote her 2004 novel, Symptomatic, with an eye toward escaping that trap. “I wanted to write about really fucked-up mixed-race characters and really messed-up women.”

More recently, she labored for five years over a novel she never finished, partly because she was a mother with young kids (she has two sons with her novelist husband, Percival Everett) and partly because she was paralyzed by “feeling beholden to her community.” Then, a few years ago, she had drinks with her old New York pal Junot Díaz, who she says advised her: “Forget everyone else and do something crazy.” 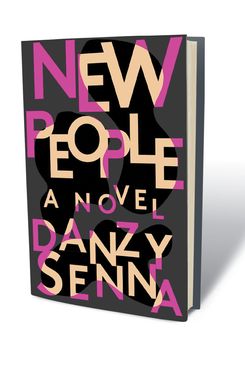 She scrapped her manuscript and began scribbling passages about a damaged academic named Maria propelled by her obsessions. That turned into New People, a mordantly funny social satire with a startling thriller edge. In the novel, Maria Pierce, a light-skinned, straight-haired daughter of a black mother, is engaged to Khalil Mirsky, a half-Jewish, half-black guy (a “Jewlatto,” in Senna’s own coinage from a previous essay). They’re living in mid-’90s Brooklyn, and Khalil imagines their life together as a brownstone-Brooklyn fantasia complete with Lorna Simpson art on the wall, kids “the color of burnished leather,” and a dog named Thurgood. But undercurrents of Maria’s ambivalence quickly surface.

A reader might wonder how much of Senna’s fiction is autobiographical; after all, she lived in Brooklyn during the late ’90s, writing for magazines and teaching at Sarah Lawrence College. I tell Senna that while reading the book I’d grown increasingly worried about Maria’s character, as the bitchy protagonist of a funny novel of social mores spirals into something more self-destructive. She laughs and says that she, too, worried about Maria. Veering away from personal experience into fantasy is a crucial first step for her as a novelist “in order to let bad things happen or let your characters do bad things.”

Senna’s been in California for 11 years now, drawn by Everett, an English professor at USC, where she’ll also begin teaching this fall. Enough time had passed that Senna felt compelled to return imaginatively to the black bohemia of late-’90s Fort Greene. “It was a ten-block radius of black artists and writers, like Greg Tate and Nelson George and Colson Whitehead,” she recalls wistfully. Spike Lee’s production company 40 Acres and a Mule was just around the corner, and the sounds of Nas and Biggie and De La Soul drifted through the streets. “We had a real feeling that this was our golden era, and I wanted to write about all the people who moved there who had just come into their blackness.” She describes that era as “pre–Lena Dunham’s Brooklyn.” On recent visits back, she’s struggled to find the creative ferment of the place she once knew. “I went to a wine bar, and almost all the people eating there were white, and the people waiting the tables were white. It was a bit of a shock to see how much had changed.”

Senna’s cell phone pings, and as she answers, she continues. “I think you are always trying to write your reality into existence, especially as a person of color and a complicated female.” She exchanges texts with her husband over who will pick their boys up from camp. “You are always in that state of cognitive dissonance,” she says, “where you feel: The culture isn’t reflecting at all what I am seeing and feeling. You don’t want to write autobiography — you just want to write the world as you know it.”

New People will be published August 1 by Riverhead Books.

chat room 3 mins ago
The Good Fight’s Alan Cumming Was Delighted to Free Eli Gold From Network TV “There was actually more swearing initially.”
cancelations 7:00 p.m.
Netflix Batgirl’d Grendel, Series Not Moving Forward They had already begun filming.
awards chatter 6:57 p.m.
My Policeman? More Like My Supporting Actors All six principals will be running as supporting actors come awards season.
coming soon 6:13 p.m.
The Favourite Duo Yorgos Lanthimos and Emma Stone Reuniting for And And our favourite duo, too.
close read 6:02 p.m.
The Sax Man’s Tribute to Reservation Dogs’ Lost Boy The season-two finale’s closing Tim Cappello performance is both a sly wink and a poignant eulogy.
coming soon 5:35 p.m.
AHS:NYC? I’m OMW The new season of American Horror Story arrives October 19 on FX.
buffering 5:18 p.m.
Dragons vs. Elves: Who Has the Better Release Strategy? Streamers say time slots are irrelevant. Maybe they’re wrong.
tv ratings 4:58 p.m.
The Rings of Power Ratings Are in, and They’re Good Nielsen weighs in on the Lord of the Rings versus Game of Thrones battle.
glee-ality 4:14 p.m.
How Does Lea Michele’s Funny Girl Review Compare to Rachel Berry’s? Ryan Murphy, you can’t keep getting away with this.
overnights 3:44 p.m.
Survivor Recap: Beware the Beads Cody pulls off an impressive move that flips the Vesi power dynamics.
overnights 3:32 p.m.
She-Hulk: Attorney at Law Recap: Hurtin’ for a Yurtin’ A bunch of Z-list supervillains give Jen the therapy breakthrough she needs.
oscar futures 3:00 p.m.
Welcome to the First Oscars of the Post-Slap Era Wake up. It’s awards season again.
By Nate Jones
oscar futures 3:00 p.m.
The New Rules of Oscars Season As we stand on the precipice of another awards season, here are four crucial lessons to remember about the way the Academy works now.
vulture lists 3:00 p.m.
The 35 Best Movies Over 3 Hours Long Got some extra time? Lose yourself in these cinematic spectacles.
overnights 2:49 p.m.
The Good Fight Recap: True Believer Diane wants Eli to fight the titular good fight — whatever it takes.
respect the classics 2:33 p.m.
Phil Collins and Genesis Now Have a Very Visible $300 Million Touch They sold their rights, and hope to “bring some of this music back to life.”
oscar futures 2:00 p.m.
Are You Ready for This Year’s Incredibly Messy Best Actor Race? In The Whale and The Son, two of the strongest Best Actor contenders come from films a chunk of the critical community absolutely loathed.
By Nate Jones
all in the band 1:24 p.m.
Paramore Aren’t Just Back, They’re Dating Well, Hayley Williams and Taylor York are, anyway.
into it 1:00 p.m.
Guy Branum Loves That Bros Made Room for a Happy-Sack Gay But he’s more mixed on the discourse: “You cannot change the problems of millennia of marginalization without things being a bit weird around it.”
"try everything" -shakira 12:53 p.m.
Bye, Guy Ned Fulmer, one of four Try Guys, is “working” on his marriage after his “consensual workplace” affair went viral.
More Stories