Ed Sheeran and Arya Stark laugh it up.

You can read all about the amazing Arya revenge scene in last night’s Game of Thrones premiere. You can consider the wisdom of Jon Snow’s decision to leave the Karstarks and Umbers in charge of their land. You can react with surprise at the identity of guy with gross arm, and you can dissect the whole strategy behind Dragonstone.

And after you’re done with all of those things, you can join me in marveling at the true spectacle of last night’s Game of Thrones: all the fabulous things going on with everyone’s shoulders.

Just look at the glorious things happening in the scapular region of this outfit. It’s militant and strong, but still feminine. The sharp angle of that neckpiece plays off of the rounded curves of the shoulders. The high neckline signals complete impenetrability; this is as much battle armor as it is a gown. No one’s getting access to that throat — no sword, and probably not Euron Greyjoy, either. But the real message is in those shoulders, which are a bit hard to see straight on. From the side, though, we can see …

… that those aren’t just random details on those shoulders. They’re Lannister lions. Hmm. Who else is sporting a lion look on the shoulder?

Cersei’s throne outfit is the feminized, translated version of Lannister armor, complete with small lions on the shoulders. Jaime’s is the real deal — he’s ready to hop on a horse and take down some invaders at a moment’s notice. And of course, it features very large, noticeable lions on the shoulders. It’s the Lannister lion, which is an obvious choice for Jaime. But in the context of Euron’s marriage proposal, it’s also a signal. You may be here to try to win Cersei, Euron, but if you didn’t already know the situation between these two, their matching shoulder lions should be a pretty obvious hint.

This is, as many people have noted, more Jack Sparrow than it is Lannister battle armor. If the way to read military prowess is across the clavicle, Euron is not making a striking first impression. At least not in person.

His ships, though. Tell me those sails don’t have a distinctly shoulder-like shape to them. Euron’s torso may say, “Hey, I’m not particularly threatening!”, but those boats are not messing around.

Archmaester at the Citadel

The Citadel may be long on interesting library designs and Stomp-esque bedpan montages, but the fashions — especially the shoulder fashions — are seriously underwhelming. Here, the Archmaester sports a utilitarian and unremarkable smock situation, suitable for autopsies and not much else. Archmaester: devastating lack of insight on Sam’s research proposal. Boring shoulders.

It’s hardly his fault that being carted around on a sled makes it hard to pull off a strong shoulder look. Still, Bran barely even has a fur slung over his shoulders. A very shabby showing. We have to hope that Jon Snow will hook him up with something a little more imposing.

Now this is what I’m talking about. The Northern fashions are all about shoulder size; the bigger and more furred your shoulder, the more power you have. Here, Jon finally has so much power that it looks like his shoulders are coming straight out of his ears. He has a problem, though.

Jon might be in charge, but Sansa’s shoulders are giving him a run for his money. Her furs are every bit as striking as his, and her shoulders are massive. The power struggle we saw playing out between them carries through to their competing profiles. 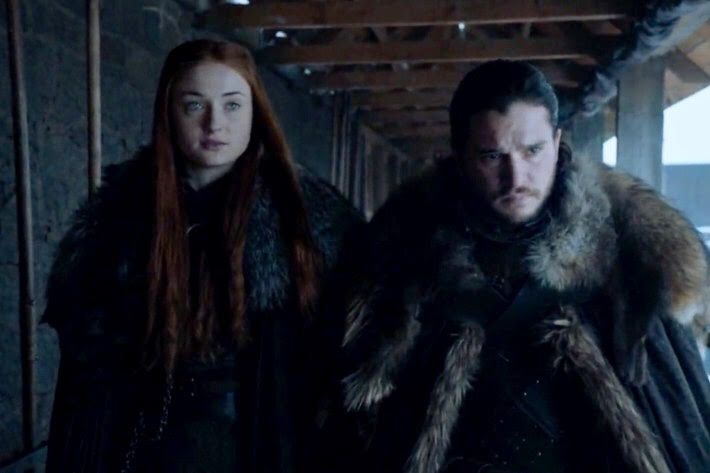 Just look at the two of them walking together! Those shoulders do not say, “Clearly Jon is in charge, here.” They are the shoulders of equals. And seriously, How do they even fit next to one another in a hallway? 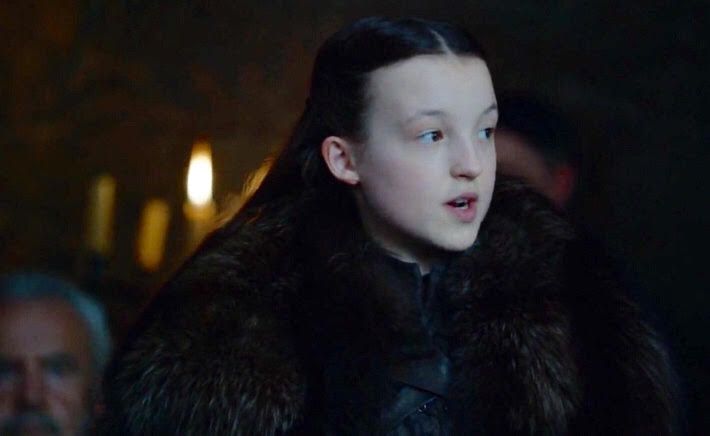 We see another excellent example of shoulder-as-status-symbol in young Lyanna Mormont. She may be little, but those shoulders are not joking around.

And in the same vein, we see the other end of the shoulder spectrum — Alys Karstark and Ned Umber are in the right genre, but their profiles are unquestionably wimpy compared with the Stark and Mormont offerings. It makes sense given their uncertain status at this meeting; they’d want their shoulders to be nothing but deferential.

Northern fashion shoulders are all about big, glossy furs, and the more civilized Starks wear them in a way that suggests wildness, but also some editing. Tormund, though, goes full mountain man as befits a wilding. It’s the same basic idea — big shoulders, big power. Except Tormund’s furs have none of the Stark sleekness. They’re powerful, but they’re also raggedy. 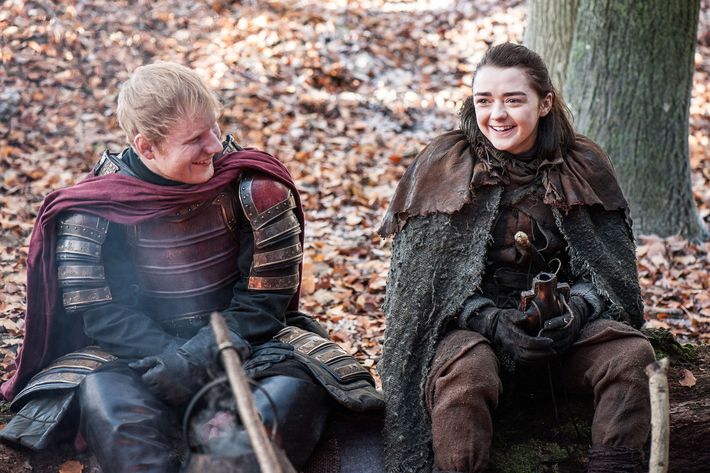 Like the Hound, Arya’s shoulders are neither here nor there. They’re noticeable, but they don’t advertise their presence; they’re not Stark furs, but they’re not battle armor, either. They’re a useful, protective dark leather, but they’re also fairly featureless. They’re boring, protective, and unassuming — not especially male or female, and not drawing attention to themselves. They are shoulders of someone who can get things done, and can then slip away quietly.

If you bring in a famous face but you want to at least attempt to make him fit in with the fiction of the show, you’re going to want to aim for some nondescript shoulders. I give you: the shoulders of Ed Sheeran, Game of Thrones character. Just your average soldier shoulders. Nothing special to see here. Definitely no notable tattoos. Move along.

Finally, we turn to Daenerys, who’s often gone with a sleeveless or cap-shoulder look in the past. It makes sense in the desert, and she’s never come up against the actual Lannister threat before. These, though? These are aspirational shoulders. They’re almost Cersei-like, in fact. She’s now finally coming face to face with the Lannisters, and her shoulders say, “You better watch out.” Like Cersei, Dany’s paired the strong shoulder with a very strong V-neck angle, but while Cersei’s throat is entirely covered, Dany still shows some small vulnerability. In the light, at least, that’s what we see.

In a silhouette profile, though? Standing in front of that giant map table (which echoes Cersei’s giant floor map)? Daenerys is all shoulder. You better watch out.

+Comments Leave a Comment
Game of Thrones: The Best Shoulder Fashion in the Premiere

flop weekend 25 mins ago
Disney’s Strange World Eats Space Dirt at the Box Office Not even Jake Gyllenhaal’s press-junket memes could save it.
pick-a-little donate-a-lot 12:20 p.m.
Nicole Kidman Comes to This Place (The Music Man) for Magic (to Donate $100K) Only she could earn a standing ovation as an audience member.
vulture 10x10 12:00 p.m.
The Geometric Puzzle 21-Down, Five Letters: Movie that gave us the term “chestburster.”
the law 12:00 p.m.
Everything We Know About the Megan Thee Stallion and Tory Lanez Shooting Lanez has been ordered under house arrest following an alleged altercation with August Alsina.
By Victoria Bekiempis and Zoe Haylock
piano's hot 11:29 a.m.
Damien Chazelle Is Spiritually Incapable of Making a Movie Sans Jazz Margot Robbie All About Eves Samara Weaving in the Babylon trailer.
overnights 11:18 a.m.
The Real Housewives of Potomac Recap: Take It to da House Somehow, Karen has become the personal steward of everyone’s behavior in this Mia-versus-Wendy situation.
disrespect the classics 10:59 a.m.
Bob Dylan Hopes to ‘Rectify’ Book-Signature Controversy ‘Immediately’ After Simon & Schuster offered refunds for $599 auto-signed editions of his new book.
snow jams 9:29 a.m.
The 50 Best Original Christmas Songs Since ‘All I Want for Christmas Is You’ Queen of Christmas, meet your disciples.
last night on late night Yesterday at 11:25 p.m.
John Mellencamp Has No Interest in Doing a Super Bowl Halftime Show He said so on WWHL.
chat room Yesterday at 10:05 p.m.
Leo Woodall Needed Some Time to Digest That White Lotus Reveal “I’d been told I might have a rumble and tumble with a couple of characters, but I didn’t know who.”
overnights Yesterday at 10:03 p.m.
The White Lotus Recap: Whoopsie As family secrets are being kept and revealed back at the resort, a new one is brewing in Palermo.
whodunnit? Yesterday at 10:03 p.m.
The White Lotus Kill or Be Killed Report: Two Can Keep a Secret Well, a couple of names just shot to the top of the suspect/victim list.
overnights Yesterday at 9:15 p.m.
Yellowstone Recap: As Good As Gone The dynamic between Jamie and Beth changes for the first time … ever?
overnights Yesterday at 9:00 p.m.
Dangerous Liaisons Recap: The Sex Dungeon The growing bromance between Camille and Valmont is delightful.
theater review Yesterday at 8:49 p.m.
KPOP Offers a Not-Actually-All-Access Pass A musical about making it big feels neutered by its own backstage process.
justice for booster gold Yesterday at 6:25 p.m.
James Gunn Wants All the DC Movies, TV, and Games ‘Connected’ He and Peter Safran have big plans for the DCU.
coming soon Yesterday at 5:50 p.m.
Helen Mirren Will Travel to 1923 for Yellowstone Prequel A new trailer dropped showing off Mirren and Harrison Ford smoldering at each other.
fancasts Yesterday at 5:40 p.m.
Hey, Antonio Banderas Knows a ‘Fun’ Guy Who Could Play Zorro If he was asked to do a third movie, he would want to pass the mask to this former co-star.
goth girls Yesterday at 4:22 p.m.
Jenna Ortega Didn’t Want to Copy Christina Ricci’s Wednesday According to Ortega, she and her co-star never even said the word Wednesday to each other on set.
performance art? Yesterday at 2:51 p.m.
The 1975’s Matty Healy Is Doing a Lot on Tour From kissing fans to eating raw meat onstage, here’s a roundup of what he’s been up to.
More Stories