After screenings of Spider-Man: Homecoming, everyone took to Twitter to argue about whether Spider-Man: Homecoming was better than Spider-Man 2, which had previously held the title of consensus-best Spider-Man movie. As I consider the best Spider-Man movie to be the music video for Dashboard Confessional’s “Vindicated,” I am not going to weigh in on that debate, but note how the two Amazing Spider-Man movies get lost in that conversation. Do I think they are the best? Not really, but they did have Emma Stone and Andrew Garfield — during their real-life relationship prime — flirting their asses off. I don’t know who the villains were, but I do know their chemistry was more electric than … the electric guy Jamie Foxx played in one of them

Luckily, someone else remembers them: Jon Watts, the director of Spider-Man: Homecoming, or at least, one of the about 56 other people who are credited with writing the film. How do I know this? Because, toward the end of the movie, Homecoming features a truly unexpected reference. Do you know what it was to?

Here is a hint: 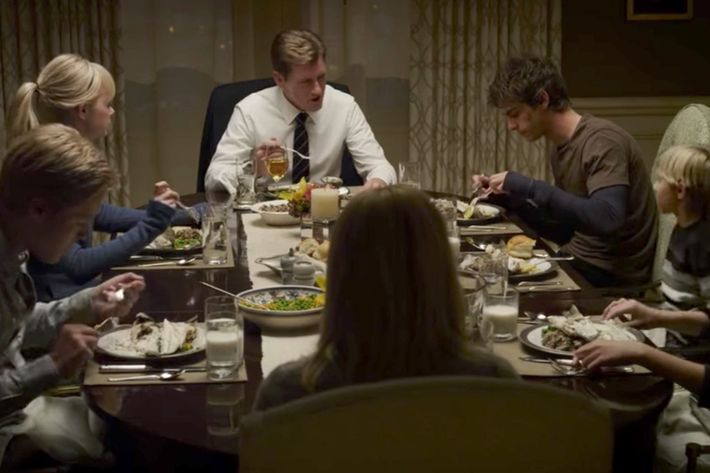 Know it yet? How about now: 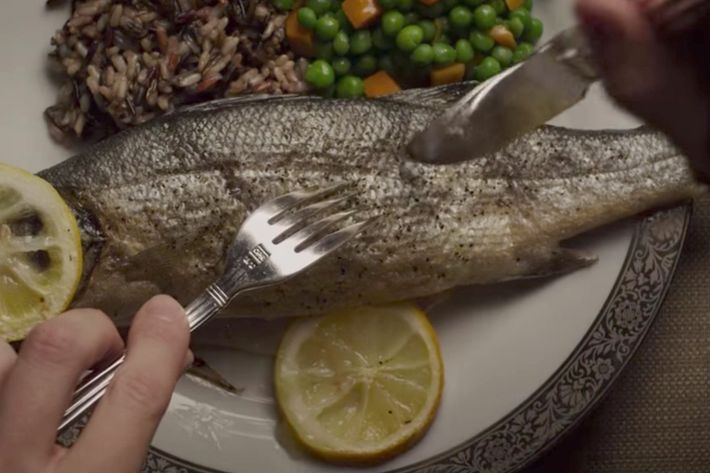 How could you forget this pivotal scene (assuming you did), considering its inclusion in a post on this very website titled “The Things We Can’t Forget From This Summer’s Movies”? Or that another website, the Awl, asked you nicely not to: “Let Us Never Forget the ‘Spiderman’ Branzino Moment.” (Itself a reference to a blurb written in the New York Times Magazine praising the fish as having the “Cameo of the Year.”) By featuring one iconic close-up and what seemed like 16 separate references to the European sea bass, the branzino scene from The Amazing Spider-Man was the fish-centric dinner scene from a major motion picture released in summer 2012.

Thankfully, the most unlikely part of The Amazing Spider-Man resulted in the most unlikely reference in a film lousy with references to various bits and pieces of the Spider-Man universe. No one likes spoiled fish — except that creep Heathcliff — so I won’t give too much away about when the reference happens, but just know that spoiled fish is a little hint, as one character is served branzino offscreen and is not pleased with the result. (Once you get to know the character, you’ll know the moment is classic that character.) Seems small, sure, but this joke gets nearly as much screen time as Zendaya.

The point is, it was nice. A little reminder that love might fade, and Spider-Men (Spiders-Man?) might change, but that doesn’t mean the time spent together didn’t matter and wasn’t, at times, amazing.

So, this was a post about branzino in two Spider-Man movies. If you’re reading this after you saw Spider-Man: Homecoming, in the poll below, please let us know if you caught the branzino reference:

Did you catch the branzino reference in Spider-Man: Homecoming?

+Comments Leave a Comment
Did You Catch the Amazing Spider-Man Joke in Homecoming?

album review 3 mins ago
Sam Smith Toes the Line on Gloria The singer’s new album is sharp, occasionally cringe-y, and full of heartfelt schmaltz.
sundance 2023 8:00 a.m.
As Seen at Sundance The talk of the ski town at this year’s film festival.
By Rebecca Alter and JJ Geiger
overnights 8:00 a.m.
Shrinking Series-Premiere Recap: Psychological Vigilante What happens when a therapist gets tired of incremental self-improvement and speeds up everyone’s mental health journey? Let’s find out!
the grub street diet 6:00 a.m.
Sylvan Esso’s Amelia Meath Wants the Weird Appetizers “If there’s a bad app, I’ve gotta try it.”
By Alan Sytsma
what dreams are made of 1:47 a.m.
Hilary Duff Is Still ‘Optimistic’ About a Lizzie McGuire Revival You hear that, Disney+?
my music video is dropping 12:10 a.m.
Obviously, There’s a Lotta Lavender in the ‘Lavender Haze’ Video It is once again time to meet Taylor Swift at midnight.
have mercy 12:01 a.m.
Chlöe’s ‘Pray It Away’ Video Takes Us to Church The lead single off her upcoming debut album, In Pieces.
it starts with this Yesterday at 8:59 p.m.
The It Ends With Us Movie Ended Up Casting Blake Lively Justin Baldoni will also star in and direct the adaptation of Colleen Hoover’s bestseller.
overnights Yesterday at 8:26 p.m.
The Real Housewives of Miami Recap: Wrong Answers Only Three riveting Housewife fights in a single episode? Simply iconic.
let her cook Yesterday at 7:38 p.m.
The Bear’s Ayo Edebiri Is Joining Phase Five of the MCU She’ll serve us a new role in Marvel’s Thunderbolts.
#freebritney Yesterday at 6:01 p.m.
Britney Spears Says Her Fans ‘Went a Little Too Far’ With Wellness Check Addressing fans who were concerned when she deleted her Instagram.
overnights Yesterday at 6:00 p.m.
Poker Face Recap: You Can’t Un-murder Someone Doxxxology’s got a killer new song.
yesterday on daytime Yesterday at 5:44 p.m.
Who Cut the Cheese on The View? No, it wasn’t Meghan McCain.
rap music on trial Yesterday at 4:55 p.m.
Everything We Know About YSL’s RICO Case District Attorney Fani Willis was once on the same side as a YSL member, representing Mondo in a 2019 case.
tv review Yesterday at 4:47 p.m.
Shrinking Desperately Wants You to Like It The new Apple TV+ comedy starring Jason Segel and Harrison Ford is as needy as its protagonist.
ow Yesterday at 4:38 p.m.
Bravo Also Investigated Heather Gay’s Black Eye “I don’t know what happened,” Gay said at the reunion.
legendaddy Yesterday at 4:05 p.m.
Rauw Alejandro and Daddy Yankee Are Dropping ‘Panties y Brasieres’ The secret menu item on Saturno.
buffering Yesterday at 3:47 p.m.
What Netflix’s Bela Bajaria Era Means for Hollywood “She needs to keep programming things people watch versus snobby s- - - people don’t.”
it's a party! Yesterday at 2:30 p.m.
NBC Is Throwing Carol Burnett a Giant 90th Birthday Bash Featuring music and comedy from Amy Poehler, Steve Carell, Bernadette Peters, and more.
buzz buzz Yesterday at 2:26 p.m.
How to Support the Yellowjackets and the Suit Jackets at the Same Time Succession and Yellowjackets airing at the same time doesn’t have to ruin your life.
More Stories