The average lifespan of a vulture is somewhere between 10 and 30 years, and the average lifespan of most comic-book villains is even shorter. Sure, there are memorable ones who’ve been around for a long time, but the majority of them are one-off jabronis who pop up and disappear as quick as they came. Not so with the Vulture. The Spider-Man villain first appeared in the second issue of Spidey’s solo series, way back in 1963, and has been kicking around ever since. Well, versions of him. Sometimes one person holds the Vulture mantle, sometimes other folks do, and all the while, the Vulture’s costume and overall look keep mutating. With Vulture set to soar across the screen in Spider-Man: Homecoming, we decided to put together a little retrospective on the visual evolution of the Vulture.

1963: The first Vulture, elderly thief Adrian Toomes, makes a big, green, feathered entrance in The Amazing Spider-Man No. 2. Although a few people steal his costume afterward, the costume itself stays more or less the same for two decades.

1985: A group of lowlifes rip off Adrian’s flying technology and become the Vulture wannabes known as the Vulturions.

1993: A series called Spider-Man 2099 envisions versions of the Spidey cast living in a possible future. One inhabitant of the world of 2099 is an all-new Vulture, complete with a curious gladiator helmet. This Vulture is more or less insane, and eats human flesh.

1994: The beloved ’90s Spider-Man cartoon features a vision of Adrian bearing blocky armor and a truly bizarre bit of headgear that emphasizes his chrome-domed pate.

1999: Another possible-future story hits stands, this one called Earth X. Its dystopian Marvel universe includes an assemblage of unsavory bodyguards for President Norman Osborn, including an animalistically mutated Vulture, complete with beak.

2000: Hey, guess what? It’s another possible future! This one appears in Spider-Girl, a long-running cult-hit series about Spider-Man’s daughter taking up the family business. She faces a new Vulture: Brenda Drago, who is the daughter of a guy who once stole Adrian’s costume back in a story from 1967. She’s into black and silver.

2001: Another one of the many Spider-Man cartoons, Spider-Man Unlimited features a version of the Vulture not from a possible future, but from an alternate present (oh, superhero fiction). This Vulture is a good guy who initially suspects Peter Parker of being a baddie before they end up collaborating.

2004: Spidey took a grimmer turn in a series called Marvel Knights Spider-Man, in which various Spider-villains came together to destroy every aspect of Peter’s life. One of those sinister characters was Adrian, who adopted a costume with a crimson collar and an ebony carapace.

2008: A Spider-Man video game called Spider-Man: Web of Shadows gives us a more regal-looking Adrian who bears an intimidating chestplate and wings like big ol’ anime swords. The look is not to last, though, as he eventually becomes possessed by …

… a vicious alien symbiote who, in addition to flying like a bird, also likes to flip you the bird.

2009: Another fellow takes up the winged legacy of the Vulture in a late-aughts Spidey story. This guy, Jimmy Natale, is the subject of illicit experimentation and ends up as a soaring, demonic mutant.

2011: I’m going to editorialize for a moment and say this is my favorite Vulture look. In a mainstream-reality story line, Adrian takes on a group of flying protégés and spends his time not in his green getup but in a shirt-and-pants combo that could not be more black.

2014: Hey, it’s another alternate-reality story! This one takes place in a steampunk universe during a massive crossover event where we saw dozens upon dozens of parallel-universe versions of Spider-Man. One of them isn’t even Peter Parker — it’s a woman named May Reilly, and when she combats a team called the Six Men of Sinestry, one of them is a WWI-goggled Vulture.

2014: The animated tales of Spidey never really stop, and a recent series called Ultimate Spider-Man had an all-new take on the Vulture. Here, he’s a mutated human who has been turned into a vulture hybrid by Doctor Octopus, and he develops a tumultuous frenemyship with young Peter. 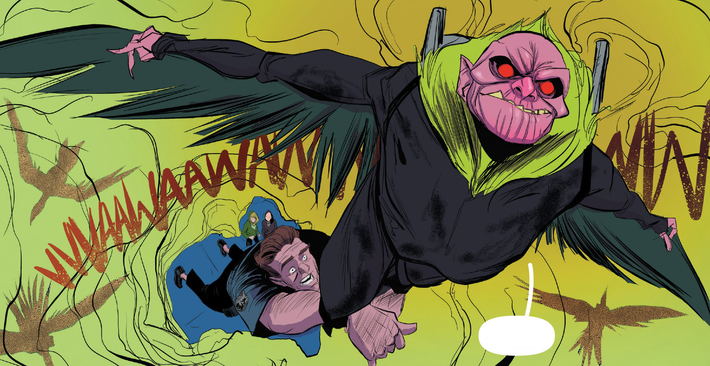 2015: Another alternate reality! This one is in a series called Spider-Gwen, which imagines a world where Gwen Stacy became Spider-Woman after Peter tragically died. This Vulture is way crazier than his mainstream equivalent and has truly messed-up eye and chin situations.

2016: Our last alternate reality, I promise! In a universe-hopping series called Web Warriors, we encounter a world where Spider-Man is a punk rocker whose concert is threatened by megalomaniacal corporate overlord Adrian Toomes, here in charge of “Vulture Records.” He’s still into green, for whatever reason.

2017: Last, but certainly not least, is the newest addition to the Vulture bunch: the version played by Michael Keaton and various CGI animators in Spider-Man: Homecoming. It keeps the furry collar and metal wings of the original, but adds a truly rad helmet and green eyes that will keep you up at night. Whatever cosmic fashion designer has been secretly putting together all these looks since 1963 deserves a raise.

kellyoke 3 mins ago
Kelly Clarkson Invents Extending Plays by Announcing the Kellyoke EP She’s happier than ever with the song choices.
timelines Yesterday at 10:30 p.m.
Everything That Happened on This Is Us in Chronological Order Six seasons of twisty family drama, untwisted.
By Maggie Fremont
post grad jobs Yesterday at 10:19 p.m.
Dr. Taylor Swift May Visit Grey’s Anatomy For A Check-Up Fans noticed Swift’s name in the IMDB credits for an upcoming episode.
overnights Yesterday at 10:02 p.m.
This Is Us Series-Finale Recap: A Regular Saturday This Is Us offers a reassuring handhold and a longing stare out a car window as it bids us farewell.
tragedy Yesterday at 8:55 p.m.
CBS Pulls Tonight’s FBI Season Finale After Texas Tragedy The episode’s plot involved preventing a school shooting.
close read Yesterday at 6:41 p.m.
The Winds Have Shifted for Jimmy and Kim on Better Call Saul Visual cues and callbacks illuminate the dark implications of that shocking ending.
crypto bros Yesterday at 6:35 p.m.
Seth Green Gets Scammed Out of His Show’s Main Character A Bored Ape Yacht Club NFT named Fred …
walkouts Yesterday at 4:56 p.m.
Why Did Sasha Banks and Naomi Walk Out on WWE? And what is going on with this corporate statement?
summer preview Yesterday at 4:50 p.m.
What Summer TV Experience Are You Looking for? Return to the ’80s, fly alongside a dragon, or travel to the cosmos — your couch plans are set with summer’s new and returning series.
comics Yesterday at 4:29 p.m.
‘Hunter x Hunter’ Creator Mysteriously Joins Twitter, Teases New Installments A cryptic tweet from Yoshihiro Togashi surprised fans after his four-year hiatus.
chat room Yesterday at 4:00 p.m.
Patrick Fabian on Walking Into the Violent Half of Better Call Saul “It took my breath away on the page.”
By Ben Rosenstock
summer preview Yesterday at 4:00 p.m.
29 Plays and Musicals We Can’t Wait to See This Summer Indoors and outdoors, uptown and down.
women Yesterday at 1:38 p.m.
Casting Directors, Behold: Anne Hathaway and Zendaya Their Paolo Sorrentino–directed ad deserves to be a sexy lesbian thriller.
chat room Yesterday at 1:00 p.m.
Mod Sun Wrote Avril Lavigne Into His Movie Before They Started Dating “The whole idea of the moment was to be like, Is she ever gonna show up?”
cater it to the limit Yesterday at 12:58 p.m.
20 Essential Bob’s Burgers Episodes Featuring musical numbers, puns, fart jokes, and plenty of heart.
chemistry tests Yesterday at 12:43 p.m.
The Great Debate Over Amber Heard and Jason Momoa’s Chemistry Is this even a thing in superhero movies?
priced out Yesterday at 12:38 p.m.
What 9 Comedians Would Produce With a Marvel-Size Budget We gave them hundreds of millions of imaginary dollars to pitch the comedy special of their dreams.
By Nayomi Reghay
crimes of the future Yesterday at 12:15 p.m.
At Cannes, Kristen Stewart Is Bracing for ‘Quite Certain Destruction’ Her new movie, David Cronenberg’s Crimes of the Future, takes place in a world in ruins. As she puts it, “We’re not far off.”
vulture lists Yesterday at 12:00 p.m.
Every Kids in the Hall Revival Sketch, From Good to Great The Kids are back to skewer cliffhangers, assassins, hateful babies, and more.
vulture 10x10 Yesterday at 12:00 p.m.
The Terminal Puzzle 9-Down, Three Letters: “I’m in my flop ___.”
More Stories