Attention Icelandic singles: Björk is on the market. In her new Dazed cover story, she’s revealed that her mysterious, just-announced next album will tackle subject matter with the potential to be even more tragic than the dissolution of the relationship she mourned on her last album. Don’t look now, but Björk’s been swiping right. “This is like my Tinder album,” she explains. Tinder! Album! She continues: “I set myself up with the last album being a heartbreak album, so everyone’s gonna be like, ‘Are you married?’ with this one. But … it’s too fragile still. I think, if I could, I’d just say this is my dating album. Let’s just leave it there.” But Björk, a mere visitor among us earthlings, appears to be looking for love in the most hopeless place this planet has to offer. “It’s about that search [for utopia] — and about being in love,” she says. “Spending time with a person you enjoy on every level is obviously utopia, you know? I mean, it’s real. It’s when the dream becomes real.”

Three seconds spent on Tinder will tell anyone utopia is the last thing you’d discover on that godforsaken app. But for the sake of Björk’s happiness — and sanity — we’ve taken it upon ourselves to play matchmaker and give her profile a deserved signal boost. Behold: Björk’s completely authentic Tinder bios. And please, serious inquiries only. 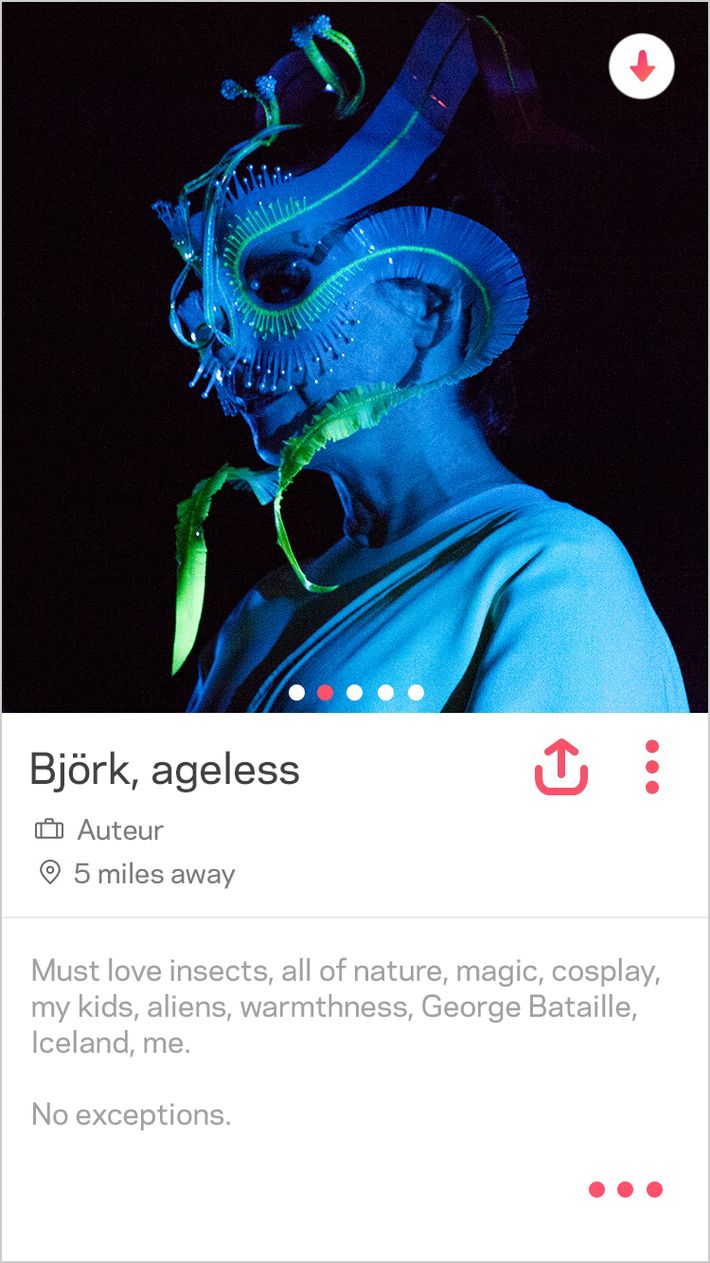 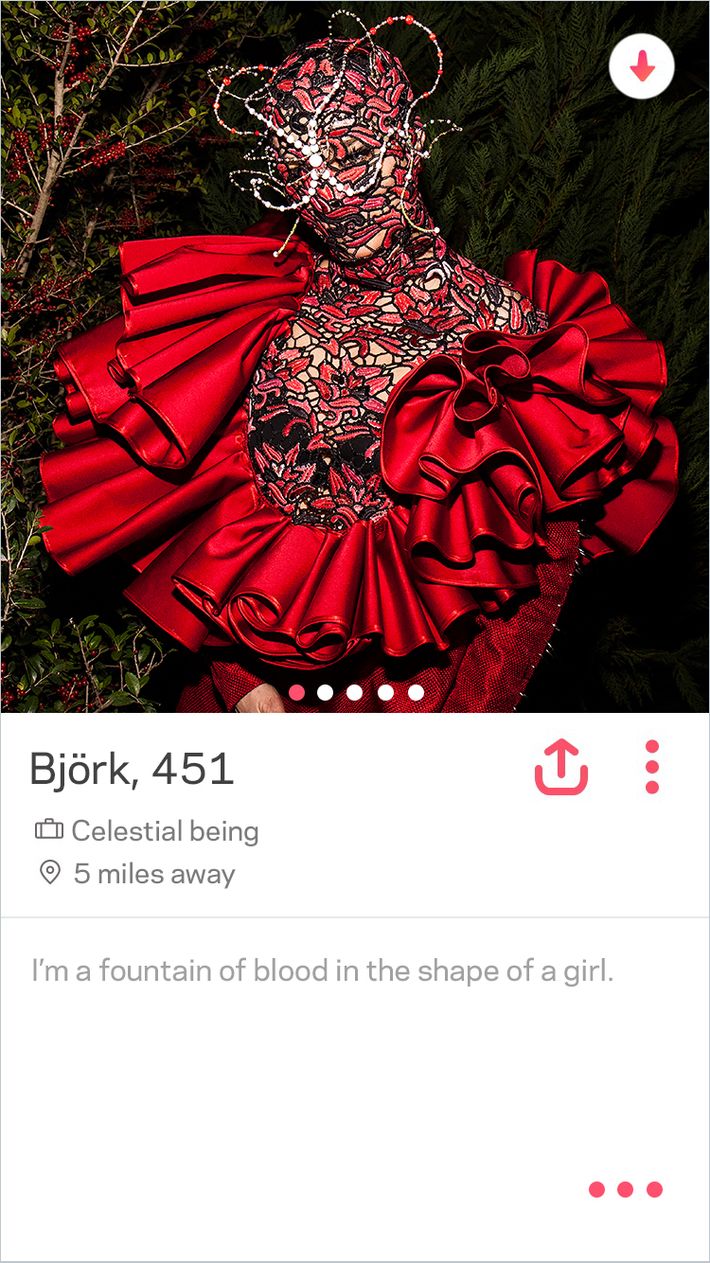 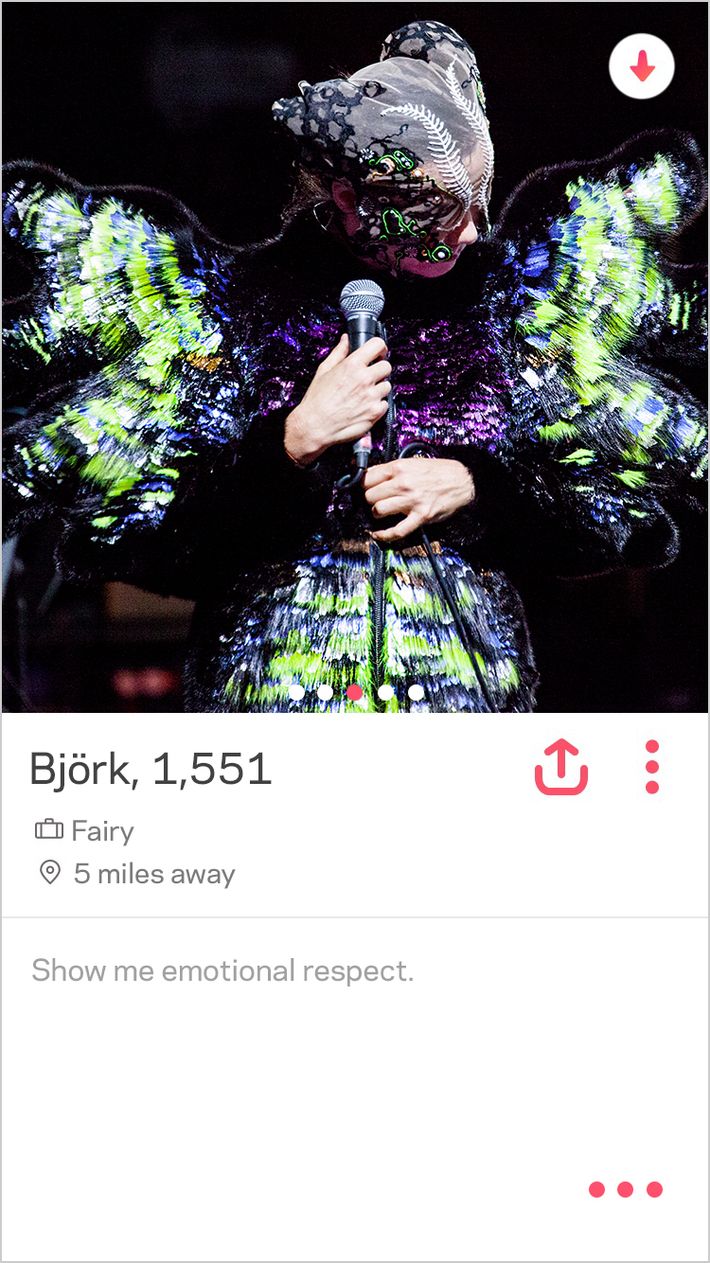 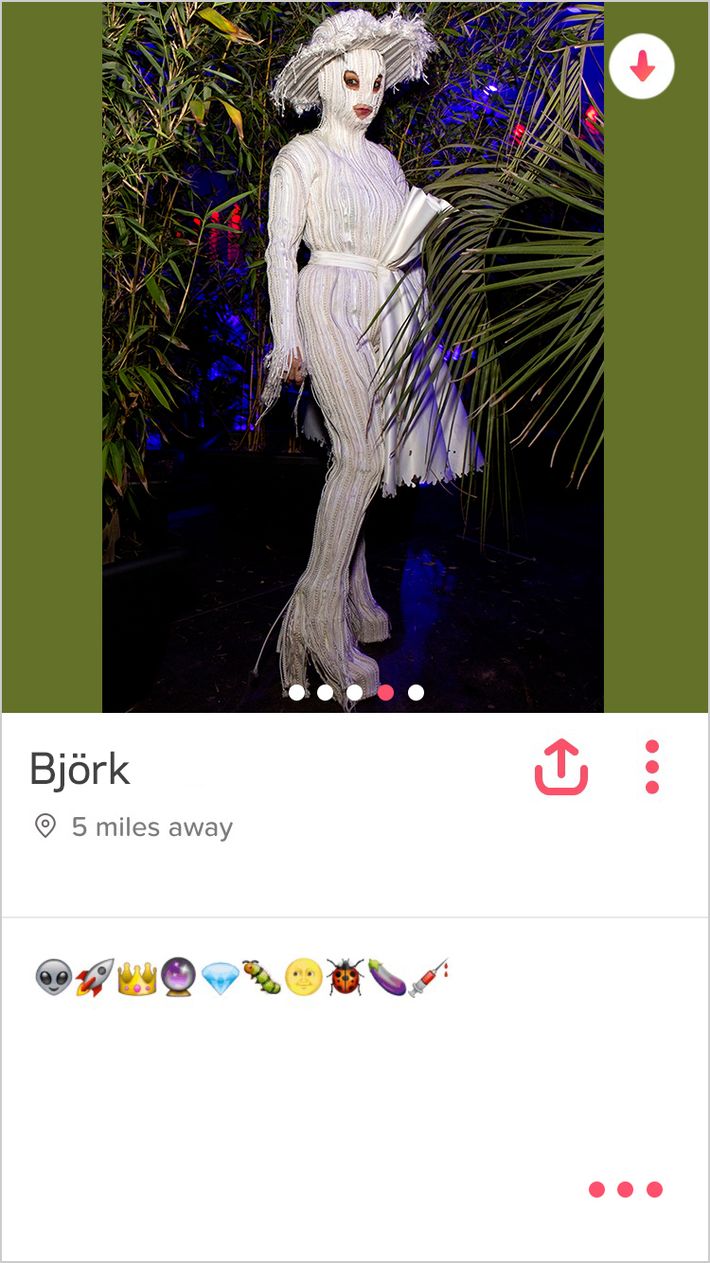 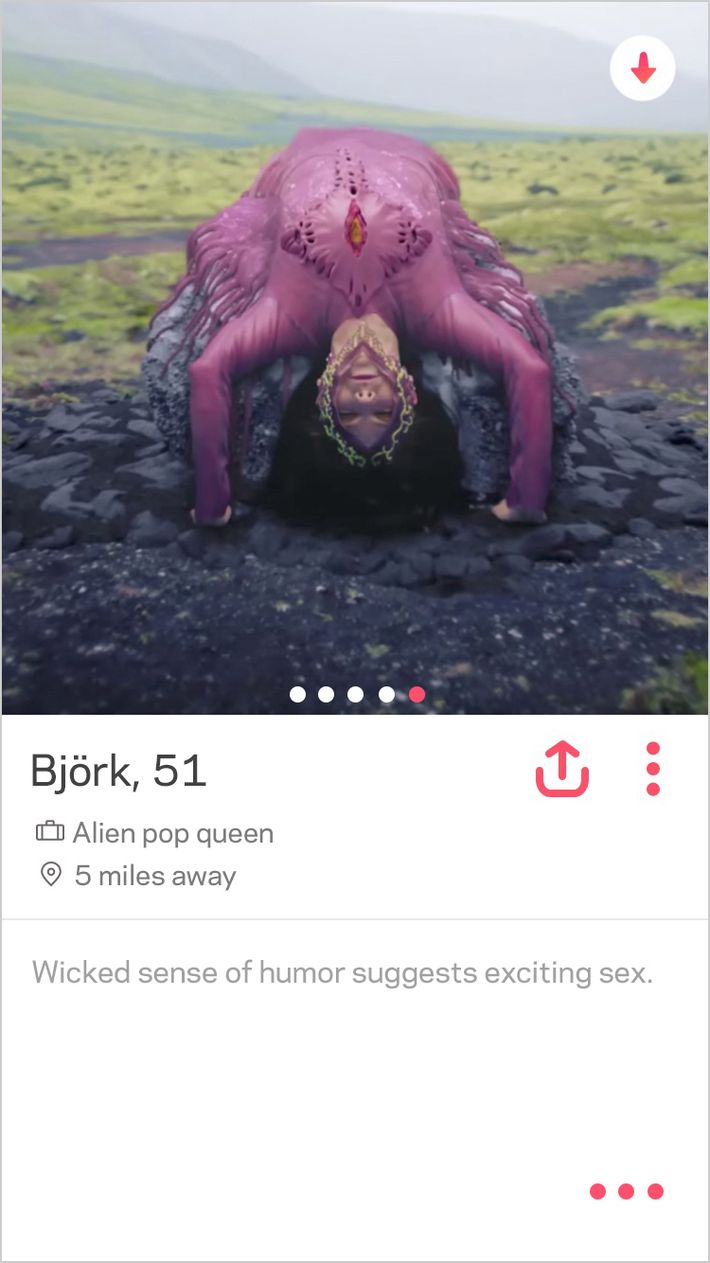 +Comments Leave a Comment
Oh My God, Björk Is Making Her ‘Tinder Album’

chat room 10 mins ago
Alvvays’s Molly Rankin Doesn’t Like Being Out-Quizzed on Her Own Album Alvvays’s latest name-checks Haruki Murakami, Murder, She Wrote, and (possibly?) a key change from Belinda Carlisle’s “Heaven Is a Place on Earth.”
awards 10 mins ago
Autofiction Writer Annie Ernaux Awarded the Nobel Prize in Literature Best known for her memoir The Years.
best of 2022 9:00 a.m.
The Best Songs of 2022 (So Far) From grungy garage rock to funky self-worth anthems and emotional electropop, these are the songs we’re playing on repeat.
overnights 8:00 a.m.
The Kardashians Recap: High Fashion While Kim tries on all the Prada, Kris tries out all the gummies.
welcome to oasis springs 8:00 a.m.
I Made Everyone from Don’t Worry Darling Into Sims Just like in the movie, no one is aware they’re in a simulation designed for one person’s sick pleasure — namely, mine.
By Bethy Squires
last night on late night 12:21 a.m.
Trevor Noah Is Mad About How Dark That House of the Dragon Episode Was Too While he still has a platform, Noah is going to be fighting for what really matters.
midnights era 12:03 a.m.
Wait, Is Taylor Swift Just Giving Us Straight Answers? Not like the videogame. Or maybe exactly like the video game?!
overnights Yesterday at 10:45 p.m.
The Real Housewives of Salt Lake City Recap: Arizona Tea The ladies’ first healing session comes not a moment too soon.
coming soon Yesterday at 7:49 p.m.
Vanessa: Blumhouse Is Making a Five Nights at Freddy’s Movie Freddy: The movie’s been in development since 2017!
memoirs Yesterday at 6:59 p.m.
8 Revealing Stories From Constance Wu’s Memoir, Making a Scene Including sexual-harassment accusations on the set of Fresh Off the Boat and the response an actress sent to those tweets.
development hell Yesterday at 6:57 p.m.
Jamie Foxx’s Spawn Movie Gets Three New Writers The project has been in development since 2017.
reading the will Yesterday at 6:39 p.m.
Wynonna Judd Denies Rumored Feud With Sister Ashley Over Naomi’s Will She says she has no plans to contest her mother Naomi’s will.
allegations Yesterday at 6:19 p.m.
Scrubs Writer Eric Weinberg Charged With 18 Counts of Sexual Assault Eric Weinberg allegedly preyed on women under the guise of doing photo shoots.
haus arrest Yesterday at 5:53 p.m.
Anna Delvey Will Stay in the U.S. on House (and Social-Media) Arrest She scammed her way out of ICE deportation, and it worked.
switched on pop Yesterday at 5:42 p.m.
Santigold Was Combusting From the Pressures of Life Creating her new album, Spirituals, was “my way to escape and create some beauty and light to grasp onto and move toward.”
party report Yesterday at 4:25 p.m.
Cate Blanchett Picked Out Her Own Power Suits in Tár Alongside costume designer Bina Daigeler.
on the record Yesterday at 4:24 p.m.
A Timeline of the Allegations Against Amsterdam Director David O. Russell Christian Bale confirms he acted as a “mediator” on the set of American Hustle with Amy Adams.
dinner party Yesterday at 3:24 p.m.
One Simple Trick Can Fix House of the Dragon’s Lighting Problem And any other shows that look like they were shot during an eclipse.
coming soon Yesterday at 3:23 p.m.
Violent Night Trailer: Santa David Harbour Gives Out ‘Season’s Beatings’ Santa Claus? More like Santa claws your eyes out.
book review Yesterday at 3:20 p.m.
Radiation Takes Center Stage, for Better or Worse, in Trinity, Trinity, Trinity Japanese history and “unseen forces” propel Erika Kobayashi’s science fiction thriller, sometimes at the expense of its own characters.
More Stories