After a night of drinking, rather than message faceless torsos on Grindr, I decided to download Dream Daddy. I made the correct choice. Instead of the crushing indifference of app-mediated reality, I could live in a world of wish fulfillment. Dream Daddy is a dating game simulator where you play a Dad who moves to Maple Bay, a small town that happens to be filled with lots of hot, eligible dads who all happen to live in the same cul-de-sac with you. The social-media app of choice here is called “Dadbook,” and unlike Grindr, all of the dads are very responsive. If your dream in life is to feast at a buffet of virtual daddies, Dream Daddy was made for you.

The first thing you have to do is build your avatar — or your dadsona — because in order to find your dream daddy, you must first become one. Please meet Redge, who is probably some aspirational model of daddydom I have buried deep inside of me. And if you’re about to come for me about my name choice, you are forgetting that I am drunk, and clearly unaware of the fact that Redge is the name of my hair salon. 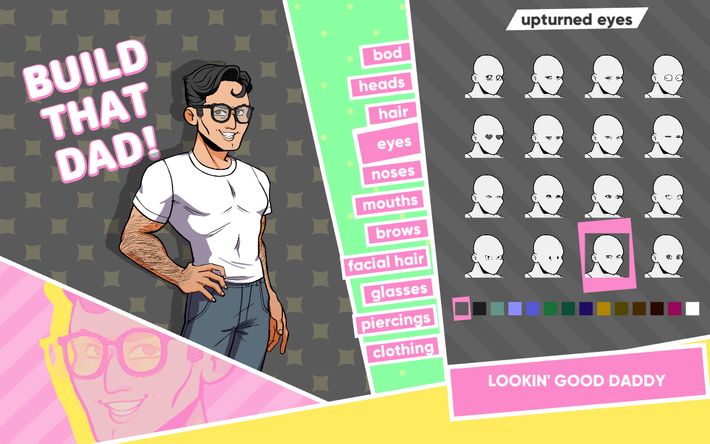 But let’s get to the reason why we’re all here: the daddies. There are seven daddies — Mat, Craig, Joseph, Hugo, Damien, Robert, and Brian — each with his own virtues, issues, hobbies, and foibles. Throughout the game you can choose which daddies you want to go on dates with: Do you want to get coffee with the barista indie-rock dad? Do wind sprints with bro dad? Go fishing with the competitive beard dad? Chaperone a dance with the married dad? What you’ll discover as you go on these dates is that there are as many types of daddies as there are daddies themselves. Each daddy is a snowflake and your tongue is just hanging out there to catch them all.

Over the next few days, I went on two dates with each dad, at which point I had to make the Choice: pick a dad to go on a third date with, which triggers the end of the game. Depending on your narrative decisions, these endings can range from a happily ever after to ones that are like, Damn, Dream Daddy. That’s kind of real. So this ranking of daddies is necessarily subjective, because it is about the daddy that my dadsona, i.e. my drunk self on a Thursday night, wants to be with. Ultimately being a dad is about making choices and sticking by them, so if you don’t like them, you’re just going to have to be a good boy and suck it up. These are my favorite dads, graded by dreaminess and daddiness.

In terms of gameplay, Joseph has one of the most compelling narratives, because he’s the only virtual dad who’s still married when you meet him. It also happens that his wife Mary is a bitter alcoholic who is clearly cheating on him. Joseph is a blonde youth minister, who wears sweaters around his shoulders like it’s 1995, with four kids, including a pair of creepy twins that seem to be internalizing the disintegration of their parents’ marriage like Big Little Lies characters. Part of the appeal is convincing this youth minister to stray, and it’s interesting to see how the game deals with Joseph’s “happy ending” (as well as a supposed alternative cult ending), but really, I’d just leave this preacher papa to his God and Mary.
Dreaminess: 1/5 sweater vests
Daddiness: 2/5 car seats

Damien is Goth Dad, or as he would be preferred to be called, Victorian Dad. He gets annoyed if you call his cape a cloak. It’s a lot. And while his obsession with graveyards, gardens, and handwritten letters would no doubt make for a very good podcast, the whole thing feels like a fancy episode of Victorian Slum House. My dadsona is too old for this.
Dreaminess: 2/5 bouquets
Daddiness: 2/5 concert T-shirts

Brian is a picturesque Dream Daddy dad. He sports a fantastic belly and full beard that makes you want to rub it with a fine oil. He does real typical dad things like fishing and fixing things and bragging about his precocious adolescent daughter Daisy. (He does seem like a really good dad.) That said, Brian regularly sends your dadsona into a flying rage, because he is better than you at everything, and frankly that’s just unacceptable.
Dreaminess: 3/5 biceps
Daddiness: 5/5 beer bellies

Now we’re cooking with small-batch, artisanal gas. Mat is the sexy, hipster dad who runs the Coffee Spoon. He collects records, makes music, and has a daughter named Carmensita, who wears those big grandma glasses that are all the rage in Bushwick. He is the perfect daddy to smoke up with and listen to the National on his record player.
Dreaminess: 4/5 mixtapes
Daddiness: 3/5 espressos

Craig is the hot guy who used to do keg stands at Lambda Phi Epsilon, but has since replaced the beer with protein shakes and baby carriers. He’ll probably make you feel bad about your lifestyle until you slowly start to enjoy the daily rigor of fasted runs and two-a-days and say that it keeps you “balanced.” I feel sort of embarrassed that I think Craig is so hot, because Craig is kind of basic, but then I remember it’s just a fantasy, bro.
Dreaminess: 4/5 jock straps
Daddiness: 5/5 baby carriers

Robert is your problematic fave. He is hot, scruffy, and estranged from his daughter, so you’re not even sure if he is a dad. (Hot tip: If you want to get the best possible scenario with Robert, don’t sleep with him the first chance you get, which I definitely did.) He loves brown liquor and outrageous stories. He is an asshole, but also one you feel like you might just be able to fix, which makes him utterly lethal. He’s like Diplo or Eric Benét, who you would definitely bang, but should always remember to use a condom.
Dreaminess: 5/5 leather jackets
Daddiness: 2/5 whiskey neats

Hugo reads books. He has long hair tied back into a messy pony, a very on-trend mustache, and a nice build that says, I’m not a body fascist but I’ve got it going on. Sure, there’s the awkward fact that he teaches your kid, but isn’t the dream of homonormativity to one day live out the scandal of a suburban housewife? Plus, there is Hugo’s secret shame: He loves wrestling, like WWE-style wrestling, which is just the kind of low-brow thing that’s completely adorable. When I had gone on two dates with each of the daddies and I had to make a choice, there was no question that I would pick Hugo. I would like Hugo to be real. Hugo, can you hear me? Hugo, can you see me? Hugo, can you find me in the night?
Dreaminess: 5/5 Cary Fukunaga man-buns
Daddiness: 5/5 screen projectors

+Comments Leave a Comment
The Dream Daddy Daddies, Ranked by Dreaminess and Daddiness

album review 24 mins ago
How Does That Make You Feel, Kendrick? Whatever your problem, Mr. Morale & the Big Steppers wants you to talk it through.
another one 1:00 a.m.
Kourtney Kardashian and Travis Barker Got Married (Again) Sealed with the Kris of approval.
tragedy Yesterday at 11:23 p.m.
Kristin Chenoweth Is ‘Haunted’ by Her Connection to Oklahoma Tragedy “It has stuck with me my whole life. I could have been one of them.”
house tour Yesterday at 10:15 p.m.
Harry Styles Moved Into Harry’s House While Touring Fine Line “I feel like I got to hide a secret this whole time.”
overnights Yesterday at 10:05 p.m.
Better Call Saul Recap: Been Caught Stealing Kim is never quite who we expect her to be, is she?
overnights Yesterday at 10:01 p.m.
We Own This City Recap: High-Speed Chase This week details Wayne’s modus operandi, both as a crook and the ultimate cop’s cop.
overnights Yesterday at 9:00 p.m.
Below Deck Sailing Yacht Recap: Vomit in the Shower Ashley …
overcome with emotion Yesterday at 8:15 p.m.
Daria Spinoff Jodie Announced As Film, Cast Includes Pamela Adlon and Kal Penn Tracee Ellis Ross will play the titular role in the film.
under oath Yesterday at 6:26 p.m.
Johnny Depp’s Lawyer Starts to Cross-Examine Amber Heard  Things are going to get even uglier.
the lost kingdom Yesterday at 5:57 p.m.
Amber Heard Says Her Aquaman 2 Role Was ‘Pared Down’ She claims Johnny Depp damaged her reputation by calling her abuse allegations a “hoax.”
overnights Yesterday at 5:53 p.m.
Conversations With Friends Recap: Get Out of Town Good-bye, dreary Ireland. Hello, unimaginably luxurious Croatia!
vulture lists Yesterday at 4:30 p.m.
Every Stephen King Movie, Ranked With Firestarter in theaters, we take a deeper look at all of the horror master’s films.
overnights Yesterday at 4:05 p.m.
Conversations With Friends Recap: Are We Still Having an Affair? In which we all collectively scream, “Put the phone down, Frances!”
opera review Yesterday at 3:03 p.m.
Brett Dean’s Hamlet Is Too Mad for Its Own Good Yet there is method in ’t.
fan encounters Yesterday at 2:23 p.m.
Cara Delevingne Hot Girl Summers Too Close to the Sun Attending the BBMAs as Megan Thee Stallion’s plus-one and/or assistant.
hole-some content Yesterday at 1:52 p.m.
Outer Range’s 15 Hole-iest Moments, Ranked Life is short, let’s talk about a hole.
going to hollywood Yesterday at 1:07 p.m.
X Factor Alum Replacing American Idol Winner on The Voice Camila Cabello takes over for Kelly Clarkson this fall.
vulture 10x10 Yesterday at 12:00 p.m.
The Hot Puzzle 3-Down, Four Letters: MacGuffin in a heist movie, maybe.
overnights Yesterday at 10:55 a.m.
90 Day Fiancé Recap: Bringing Up Baby Kudos to Emily’s parents for staying out of this fight.
bbmas 2022 Yesterday at 9:02 a.m.
The Highs, Lows, and Whoas of the 2022 Billboard Music Awards Whoa: A fever dream of an opening.
More Stories