In the tradition of penultimate Game of Thrones episodes, Sunday night’s “Beyond the Wall” devoted a huge chunk of its running time to an epic battle that unfolded in tense, violent fashion while also raising the question: “Jesus, how much did this cost?”

It was a blockbuster episode that, like so much of GOT’s seventh season, catapulted forward at a brisk pace with all the subtlety of a sword on fire. But there were some subtle things about it, particularly the ways in which it hearkened back to season one’s “Baelor.” Like “Beyond the Wall,” the penultimate episode of GOT’s first season was written by series creators David Benioff and D.B. Weiss and directed by frequent helmer Alan Taylor. Recognizing the callbacks and parallels between “Beyond the Wall” and “Baelor” adds more layers to this hour-plus of television, and in some cases, even gives it a touch of poignancy. (Poignancy, and also dragons, and also White Walkers bursting into tiny pieces.)

Let’s start with Jon Snow and Longclaw. During their journey to the other side of the Wall, Jon attempts to give his Valyrian steel sword to his new compatriot in White Walker fighting, Jorah Mormont, whose father, former Lord of the Night’s Watch Jeor Mormont, gave it to Jon years earlier. When did we see Jeor first put that sword in Jon’s hands? In “Baelor,” when he rewards Jon for saving his life from a reanimated wight. “Bloody dead man tried to kill me,” the elder Mormont says.

Game of Thrones Recap: Dragon Ex Machina
Our 16 Biggest Questions About This Week’s Game of Thrones
Everything to Know About the Night King, White Walkers, and Wights

In “Beyond the Wall,” the younger Mormont refuses to take the sword and insists that it remain in Jon’s possession, which gives Jon the means to kill even more “bloody dead men” once they face off against the Night King and his Snow Miser minions. The symbolic significance of Longclaw is emphasized further when Jon emerges from the depths of that frigid water toward the end of the White Walker battle and the camera closes in on the meticulously sculpted pommel of his blade, which waits for him on the ice as if it’s incapable of leaving his side. It is visual confirmation that Jon is the rightful heir to the weapon and has become the leader Jeor believed he could be, even if he doesn’t always climb aboard dragons when he should.

Turning to the squabbling Stark sisters, Arya and Sansa have a tense conversation about the day their father was killed. After confronting Sansa with that note she wrote under duress, Arya recalls how Sansa behaved when their father was publicly beheaded for treason. “I remember you standing on that platform with Joffrey and Cersei when they dragged father to the block,” Arya says. “I remember the pretty dress you were wearing. I remember the fancy way you did your hair.”

But Arya is indulging in some revisionist history — and we can prove it by revisiting Ned’s death scene in “Baelor.” Yes, Sansa wore a lovely gown and had her hair all did in a way that made her look like Westeros’s own Queen Amidala, but she was fully (and naïvely) expecting Joffrey to pardon her father. When Joffrey instead calls for Ned’s head, Sansa is visibly distraught and begs the punk-ass king to change his mind. Arya doesn’t remember that part because it doesn’t sync up with the narrative she’s built around her interpretation of the letter, which paints her sister as a traitor. Sansa, who never knew that Arya had witnessed their father’s demise, fires back. “Did you come running to the rescue to fight off the Lannisters and save father?”

“I wanted to,” Arya says. “You didn’t,” Sansa responds. “Just like me.” Sansa is half-wrong and half-right here: Arya attempted to run toward the platform, but was stopped in her tracks. So, did both Arya and Sansa want to save their father and found themselves prevented from doing so? Absolutely. They are not as far apart as Arya thinks.

Which brings us to the Game of Faces scene that transpires later in “Beyond the Wall.” Arya asks Sansa if she wants to play a game she learned in Braavos: “It’s simple. I ask you a question about yourself then you try to make lies out of the truth. If you fool me, you win. If I catch a lie, you lose.”

Arya may have learned this during her quest to become a faceless man, but we first saw a version of it in “Baelor,” when Tyrion, Bronn, and Shae played with a couple of twists. For starters, they made it a drinking game. “I make a statement about your past,” Tyrion says, explaining the rules. “If I’m right, you drink. If I’m wrong, I drink. And no lying.”

Essentially both versions are Truth or Dare minus the dare part, but Arya’s iteration demands and rewards deceit while Tyrion’s forbids it. More importantly, both of these scenes emphasize the fractures that develop in sibling relationships. In “Baelor,” Tyrion is prompted to tell the story of his first marriage, which came about because, unbeknownst to him, Jaime hired a prostitute and tricked Tyrion into falling in love with her because Jaime thought it “was time” his brother “had a woman.” In “Beyond the Wall,” things are far more tense, with Arya making it clear that she could kill Sansa and assume her identity. Tyrion and Jaime have mended fences to an extent, but it’s unclear if Arya and Sansa will be able to do the same. It’s hard to get past the notion that your sister wants to slice off your face.

Now let’s get to the dragon in the room: that semi-romantic scene between Daenerys and Jon toward the end of “Beyond the Wall.” There are clear visual parallels between Dany’s bedside visit with the wounded Jon and the way she bends over an ailing, bedridden Drogo in “Baelor.” Both men even have similar scars around their left eyes, though Jon’s is slightly more visible at other moments than it is in the scene with Daenerys. 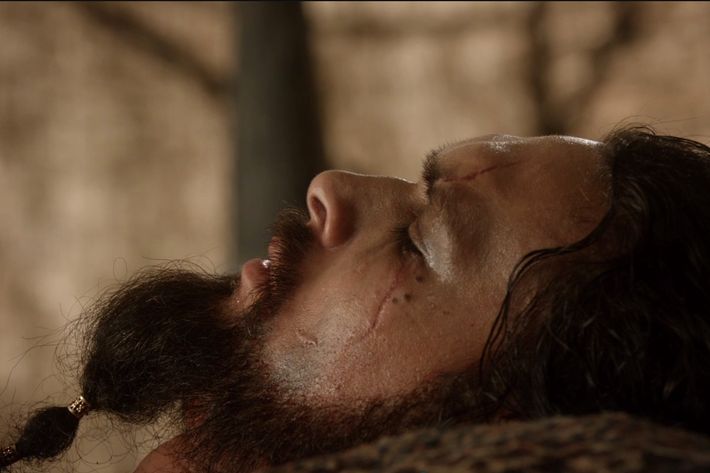 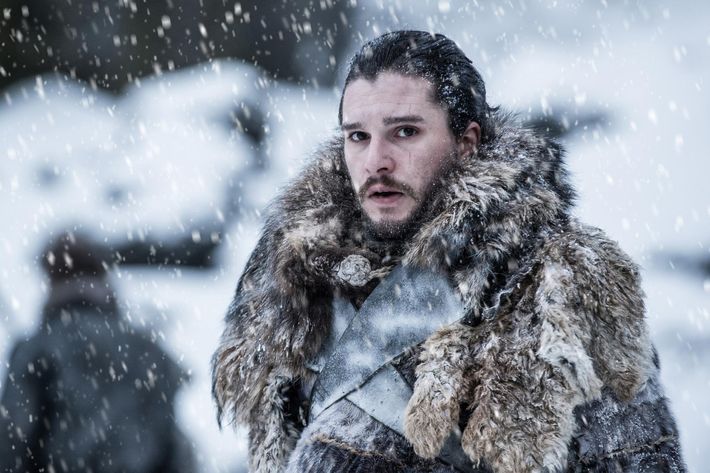 It’s also significant that Drogo suffered from a gaping, festering chest wound that Daenerys asked a witch to heal, with disastrous consequences. Jon’s sewn-up chest scar — a sign of the death from which he was resurrected by Melisandre’s magic — is fully on display in season seven, evidence that some men can retreat from death the way Dany hoped that Drogo might. Taken together, these are all symbolic clues that imply she may have found her new Sun and Stars. (Also worth noting: In “Baelor,” when Dany tells Drogo’s bloodrider Qotho that she’s “the blood of the dragon,” Qotho responds, “All the dragons are dead.” I’d say that was foreshadowing, except technically, one dragon is now undead.)

While tender feelings are clearly developing between Daenerys and Jon, there are also signs that they both intuitively sense another type of connection. “Dany?” Daenerys says after Jon refers to her by that nickname. “Who was the last person that called me that? I’m not sure, was it my brother? Not the kind of company you want to keep.” Awkward …

Lastly, speaking of the Targaryen connection, Jon is faced with a set of questions in “Baelor” that seem awfully relevant to season seven.

“If the day should ever come when your lord father was forced to choose between honor on the one hand and those he loves on the other, what would he do?”

Jon responds, “He would do whatever was right, no matter what.”

He is then asked, “What is honor compared to a woman’s love?”

One might be tempted to think that Jon’s bending of the knee to Daenerys indicates that his judgment is clouded by love, and that he is dishonoring the people of the North. I would argue that he is “doing whatever was right, no matter what” because he understands what a loyal, effective leader she can be. (Jon Snow apparently believes in the concept embedded in that Hillary Clinton campaign slogan: “Stronger together.”)

So, who was asking Jon those questions way back in season one? It was, as Jon learns at the end of their conversation, Aemon Targaryen. Jon is related to Aemon through his father Rhaegar, though he doesn’t know it yet, which makes their scene in “Baelor” a surprising sort of family reunion. Of course, Aemon is also related to Daenerys, the woman with whom Jon forms an alliance all these years later in “Beyond the Wall.”

Everything to Know About the Night King, White Walkers, and Wights