Photo-Illustration: Vulture and Photos by HBO

It’s a boy! Last Sunday, Game of Thrones’ Night King scored a dragon of his own. After using a spear to shoot Viserion from the sky, in the last scene of “Beyond the Wall,” the leader of the White Walkers raised the beast from the dead. But what do we know about wight Viserion? It’s been said that White Walkers and dragons come from shared magic, but it’s unclear exactly what we can expect when the ice dragon opens his mouth. Will he breathe fire? Or ice? Ice and fire? In an ideal world, he’ll spew candy, of course, but Vulture has considered a few interesting options.

Would wight Viserion think of the Cameo song “Candy” as he spews candy? Impossible to say, really, since it’s unclear where 1987 lands on Thrones’ increasingly incomprehensible timeline. 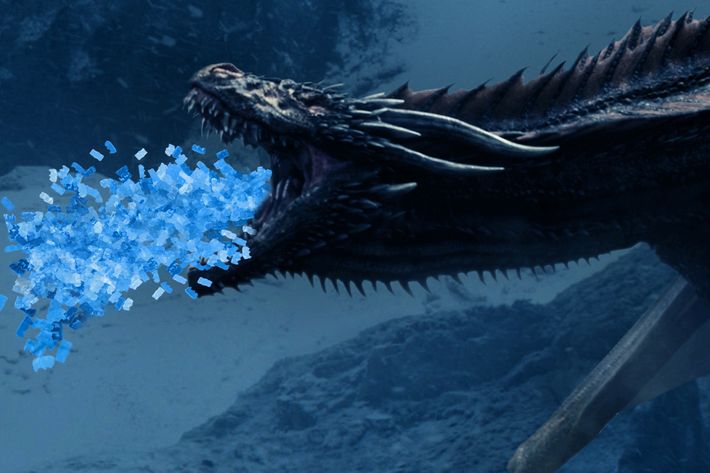 Yes, this is where Erinn Hayes went: Wight Viserion’s throat.

Talk about crossover promotion! Perhaps wight Viserion will spew tons of VMA moon men on Sunday in an effort to make you feel guilty for watching Thrones instead of tuning in to the VMAs.

The old Viserion cannot come to the phone right now … because he is literally dead. That’s why he’s a wight now.

Look what you made us do:

+Comments Leave a Comment
What Will the Night King’s Dragon Spew? An Investigation

tributes 26 mins ago
Patti Smith, Flea, and More Remember Tom Verlaine Flea praised him as “one of the greatest rock musicians ever.”
heartbroken 1:23 a.m.
Five Shows That Aren’t Getting Valentines This Year Reboot, Kindred, American Gigolo, and more have been canceled.
my singles are dropping 12:24 a.m.
Morgan Wallen’s Comeback Album Sounds Like a Big Mess Three songs from One Thing at a Time are out right now.
the vulture spot Yesterday at 11:27 p.m.
How GLOW Helped ‘My Animal’ Illustrate Lust  “I feel like everyone could connect to the early teenage experience of being aroused by some sort of videotape that you keep hidden.”
overnights Yesterday at 10:01 p.m.
The Bachelor Recap: America’s Next Top Villain Victoria F., Tahzjuan, and Courtney Robertson enter the chat to show the ladies how to get a villain edit.
the vulture spot Yesterday at 9:53 p.m.
Priya Kansara’s Only Injury While Filming Polite Society Was From… Walking  Directed by We Are Lady Parts’s Nida Manzoor, the film blends marital and martial arts.
overnights Yesterday at 9:30 p.m.
Below Deck Recap: Alissa’s Villain Era Now that Camille is gone, Alissa’s worst enemy is herself.
hard launch Yesterday at 8:10 p.m.
Paramount+ and Showtime Have Hard Launched Their Merger Paramount + Showtime - three shows = new service.
the vulture spot Yesterday at 5:34 p.m.
Jonathan Majors Says Prepping for SNL Was Almost As Difficult As Bodybuilding  “Both were extremely physical, long hours, and I had to eat a lot.”
close read Yesterday at 4:58 p.m.
The Empty Sentiment of The Last of Us In imitating the rhythms of prestige TV, the video-game adaptation loses its emotional center.
By Jackson McHenry
the vulture spot Yesterday at 4:48 p.m.
Rotting in the Sun Features 30 to 600 Penises  Sebastián Silva and Jordan Firstman report back from a gay nude beach.
coming soon Yesterday at 2:59 p.m.
Michael Jackson’s Nephew Will Play Him in Antoine Fuqua’s Biopic From the producer of Bohemian Rhapsody.
cast away Yesterday at 1:59 p.m.
Netflix Gave Us More Than One Piece of Info About One Piece Get ready to munch on some devil fruit.
vulture 10x10 Yesterday at 12:00 p.m.
The Unholy Puzzle 5-Across, Five Letters: M. Night Shyamalan film starring Samuel L. Jackson.
respect the classics Yesterday at 11:59 a.m.
The Rock and Roll Hall of Fame Is Just a Vibe Now The new eligibility requirements will honor artists whose “music connects us all.”
trailer mix Yesterday at 10:46 a.m.
Buddy-Comedy Duo Adam Sandler and Jennifer Aniston Are Back on the Case Murder Mystery 2 promises more murder and more mystery, even.
overnights Yesterday at 10:21 a.m.
The Real Housewives of Potomac Recap: Going Fishing What better time to air out some dirty laundry than when an exotic dancer is making it clap right in front of your lobster tail?
dylanology-ology Yesterday at 10:00 a.m.
A Beginner’s Guide to Bob Dylan’s Sprawling Bootleg Series Blowin’ through all 17 volumes the easy way.
trailer mix Yesterday at 9:55 a.m.
Star Trek: Picard Season 3 Looks Borg-eous The stakes are star high.
rip Yesterday at 9:55 a.m.
Annie Wersching, 24 and Last of Us Video-Game Star, Dead at 45 She also starred in Bosch and The Vampire Diaries﻿.
More Stories