If you spent the weekend binge-watching Wet Hot American Summer: Ten Years Later, you undoubtedly experienced a form of nostalgia inception, reminiscing about the original 2001 film, the childhood summer camps it parodied, and the early-’90s tropes adopted by the new series. It’s a lot to remember, but the goofy details are what make the Wet Hot universe so addicting.

Just as planned in the original cult masterpiece, the junior counselors of Camp Firewood vowed to reunite a decade later to see what kind of people they’ve blossomed into, and unknowingly, once again save the camp. In addition to the original crew come Mark (Mark Feuerstein) and Claire (Sarah Burns) — who get hilariously Photoshopped into a scene from the original movie to satisfy the narrative — as well as the slew of characters added to the Wet Hot canon by 2015’s First Day of Camp including Donna (Lake Bell), Jarron (David Wain), Logan (John Early), Shari (Beth Dover), Eric (Chris Pine), Greg (Jason Schwartzman), and the evil Camp Tigerclaw counselors Blake (Josh Charles), Graham (Rich Sommer), and Warner (Eric Nenninger).

Still, what makes these Wet Hot sequels so great are the threads that tie them back to the original movie. It’s fun to watch 40-something actors playing 26-year-old versions of characters they played 17 years ago, but it’s really the little things that make you enjoy it, like hearing that shattering glass sound effect every time something hits the ground. Read on for the 20 best Wet Hot American Summer callbacks, Easter eggs, and jokes you may have missed in Ten Years Later. 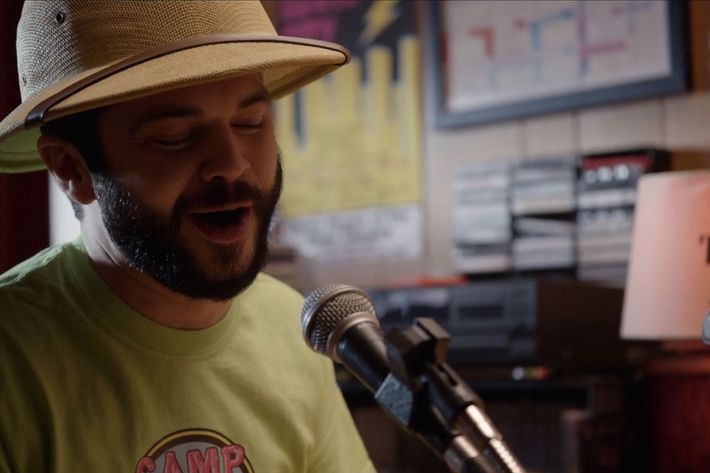 1. Arty “the Beekeeper” Solomon is “on the air”
The red light is on, but he’s still presumably talking to no one. After Arty’s origin story was revealed in First Day Of Camp, Samm Levine finally gets to play the role he’s voiced since the beginning and via two child actors. Whether or not the campers can hear his morning address, the audience catches him add an additional callback: “And McKinley, if you’re listening, I showered just last week.” 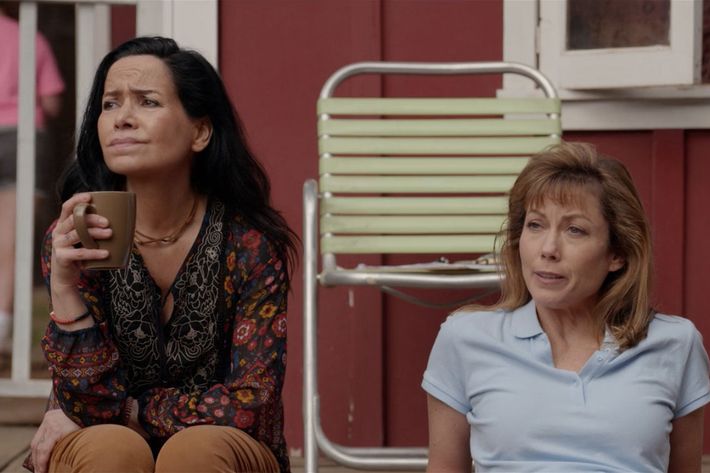 2. Beth and Nurse Nancy drinking coffee on the porch
It’s one of the first scenes of the original Wet Hot, and one of the most recognizable: camp director Beth (Janeane Garofalo) drinking her morning cup and looking bored next to Nance.

3. Susie’s obsession with theatrical credits
In the original movie, Susie (Amy Poehler) was quick to point out her role as “director-slash-choreographer” of the Godspell routine in the talent show. In Ten Years Later, she introduces her beau Garth Macarthur (Jai Courtney) as the lead actor in the film she’s “producing–slash–co-executive-producing.” Later, she clarifies, “Also [he’s] maybe an associate producer, depending on the work he does on set.” It’s important to get credit where credit is due. 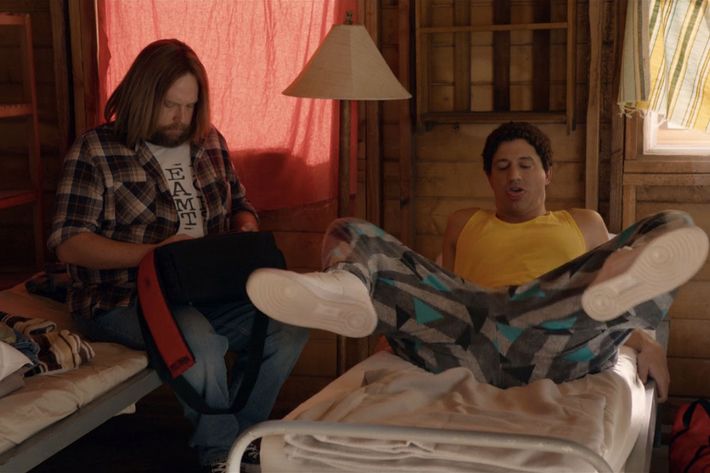 4. Victor’s lies about having sex
From humping the air in the mess hall while ogling Abby Bernstein (Marisa Ryan), to humping the air in his bunk ten years later after seeing her in the parking lot, Victor (Ken Marino) doesn’t stop lying about being a virgin until his mid-twenties. Ironically, when he does actually lose his V-card later that night to Donna and Jarron he immediately becomes, “the boy who cried ‘I got laid.’” 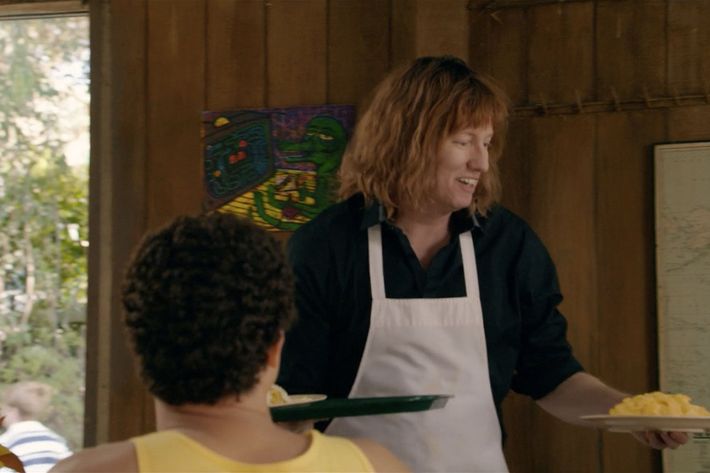 7. Andy throwing his stuff wherever he wants
He may have let his hair grow out, traded his denim for cargo shorts, and grown a soul patch, but he’s still “IDGAF” Andy. He’s even got the bandana in the back pocket!

8. Everyone remembers the summer of ’81
Upon reuniting, the gang rattles off the most memorable moments of that fateful summer: “We went to town and shot heroin,” “Skylab fell on us,” and most importantly, “We almost played softball against Camp Tigerclaw, but then didn’t.” 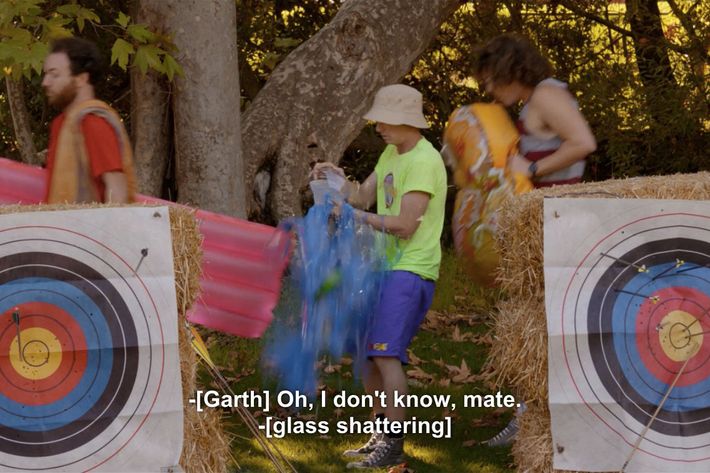 9. The sound of glass shattering
It wouldn’t be Wet Hot without it. But when it happens in Ten Years Later, we hear the sound effect because an actual glass bowl shatters. Which is somehow even funnier. 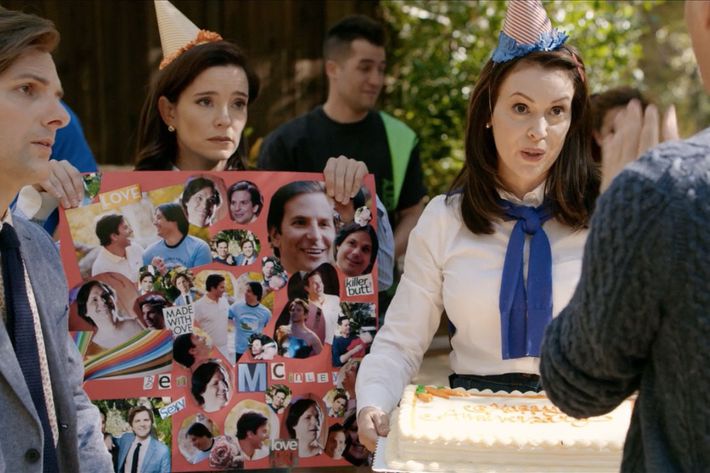 10. Bradley Cooper’s subtle cameo
It’s hard to believe it’s been ten years since McKinley (Michael Ian Black) and Ben got that chaise lounge from Crate & Barrel, but their wedding anniversary is a big part of Ten Years Later, even if Ben is now played by Adam Scott. Cooper still appears in the photo collage during the anniversary party, where we get to see his face side by side with Scott’s.

11. Counselors disregarding the welfare of the campers
Whether they’re hitting kids with arrows in Ten Years Later, or being thrown from a moving van (or drowning) in the original movie, it’s amazing that anyone survives Camp Firewood. 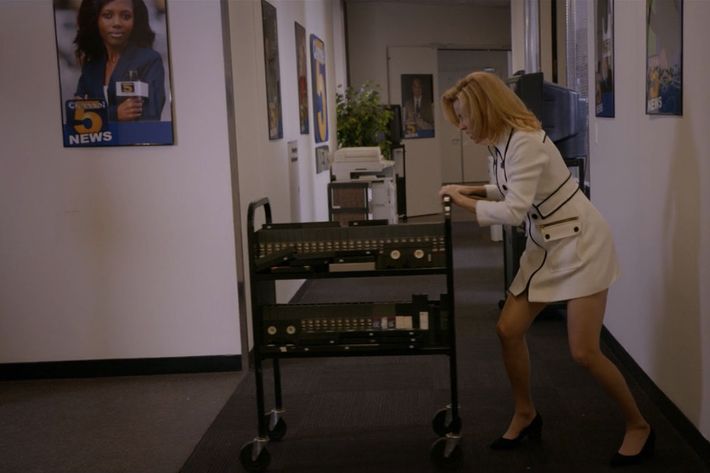 12. Tiny obstacles always foil the bad guy
In the universe of Wet Hot, things that aren’t large or obstructive present an almost insurmountable challenge to whomever is chasing you, whether it’s a bale of hay in the road to stop Neil from catching Victor in the movie, or a small cart pushed into the hallway by Lindsay (Elizabeth Banks) while escaping from the local news office in Ten Years Later. (Which, also, what was that about?) 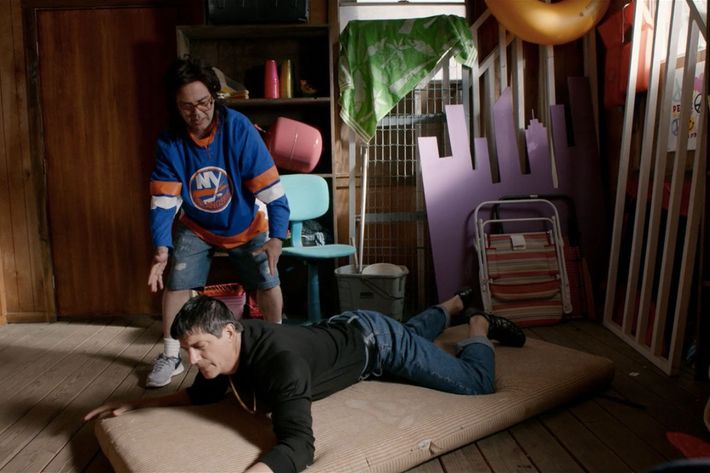 13. The shed is where you learn about sex
From McKinley and Ben’s soccer-ball-bouncing thrusts to Neil teaching Victor how to hump.

14. The goat shack is where you confess your love
Katie (Marguerite Moreau) and Coop return to the site of their first kiss to once again wear flannel and ask, “What are we doing?” 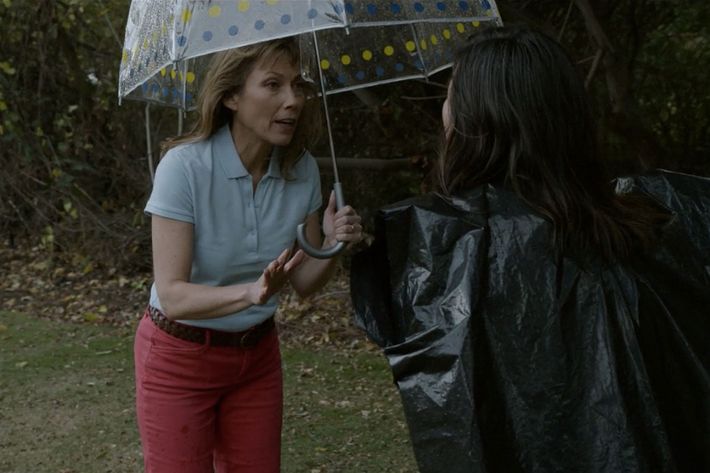 16. Gene is still rocking the same outfit
As his belatedly discovered daughter says in Ten Years Later, “Nice bandana.” Gene is back to sporting that bandana with the cut-off navy sweatshirt and jeans a decade later, despite leaving Firewood behind.

17. “You’ve got magic hands. You’re like a magician.”
When Ben gets an inappropriate massage from his nanny Renata (Alyssa Milano), he says the same exact thing Gail (Molly Shannon) did during her inappropriate child massage in the original movie.

18. Henry has a chip on his shoulder about being an “associate professor”
A decade after crying with campers over the shame of being “less than,” he introduces himself as “Full Professor Henry Newman” on a Skype call ten years later. (Another joke: The scene was clearly filmed from David Hyde Pierce’s Emmy-filled home office.) 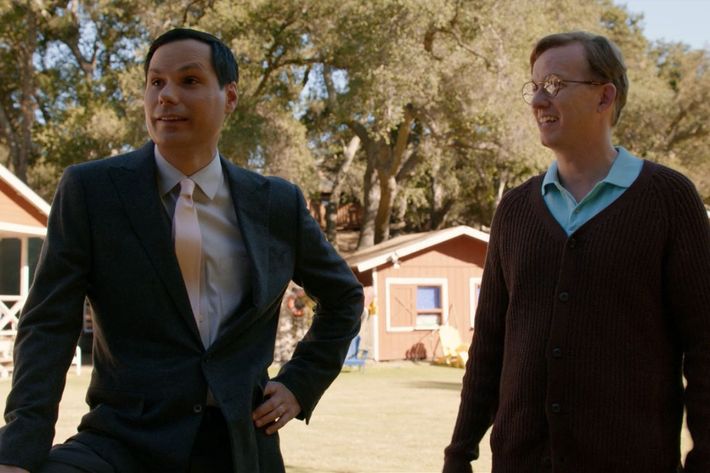 19. What does McKinley have to do at 11:00?
Just like he said in the original Wet Hot, McKinley really has a Trapper Keeper full of appointments. At the end of Ten Years Later, we’re left with a cliffhanger as to what “thing” he’s had to move twice since 1981. Whatever it is, it requires a suit. 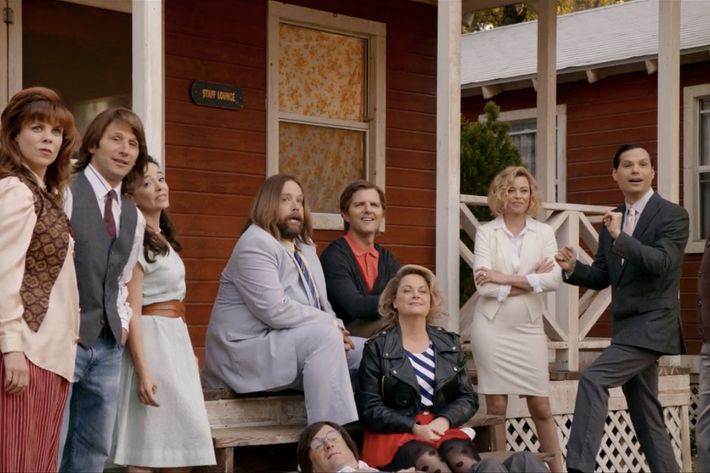 20. The movie’s “Ten Years Later” epilogue comes true
It’s so quick you could almost miss it, but Ten Years Later spliced in part of the original vision of the sequel that played during the movie’s credits. Re-creating those outfits must’ve been tough, but they nailed Lindsay’s white business-chic outfit and Gary’s unfortunate turquoise shirt/brown cardigan combo. Oh, the ’90s.

A Salute to Mitch, the Can of Vegetables From Wet Hot American Summer

overnights 9:00 p.m.
The Real Housewives of Beverly Hills Recap: Disco Brawl Imagine a big conflict wheel spinning faster and faster, imaginary conflicts flying everywhere.
hush-hush 8:20 p.m.
HBO Max Has Been Taking Stuff Down Without Warning for Weeks Update: Another 37 titles will be cut.
mental health 7:49 p.m.
Jonah Hill Takes a Break From Press Tours Due to Anxiety He directed and starred in an upcoming documentary “Stutz.”
release your job 6:20 p.m.
Christine Quinn Is No Longer Selling Sunsets Seasons six and seven of the Netflix show will reportedly go on without her.
r. kelly 6:18 p.m.
R. Kelly Chicago-Trial Opening Statements Began With Harrowing Abuse Allegations Prosecution warned the jury that the videos in evidence will be “difficult to watch.”
coming soon 4:17 p.m.
Abbott Elementary Is Back in Session on September 21 And running through the whole school year with a full 22-episode season.
buzz! buzz! 3:37 p.m.
Who Manifested Simone Kessell As Adult Lottie in Yellowjackets? Looks like Courtney Eaton is now a series regular.
sweet! 3:04 p.m.
Ellie Kemper and Zach Cherry to Co-host The Great American Baking Show The Bake Off spinoff premieres in 2023.
overnights 3:02 p.m.
Love Island Season-Finale Recap: Ti Amo Somehow Luca and his ability to generate indignant fury out of thin air made it to the finale.
merrily we cast along 2:08 p.m.
Jonathan Groff and Lindsay Mendez Join Daniel Radcliffe in Merrily We Roll Along We hope the priest from Lady Bird will be happier with this production.
1:30 p.m.
‘Foo’ or ‘Fool’? A Chat With the Cast of This Fool  A generational divide, explained.
christmas in august 1:27 p.m.
Darlene Love and Mariah Carey Are Battling for the Christmas Throne And so is Christmas-exclusive singer Elizabeth Chan.
overnights 12:53 p.m.
Reservation Dogs Recap: Hard Times Being physically present is not the same as “being there” for someone.
trailer mix 12:36 p.m.
Wednesday Teaser: The Addams Family Has Scholastic Problems and Spooky Solutions Jenna Ortega stars as the titular piranha-wielding teen.
read on 12:30 p.m.
Salman Rushdie Book Sales Soar Following Attack The Satanic Verses author has reentered best-seller lists while recovering.
american crisis 12:11 p.m.
Andrew Cuomo Can Keep $5 Million for COVID-19 Book, Judge Rules After an ethics panel previously said he had to give it up for reported improper use of state resources.
it's a re-sabotage 12:00 p.m.
Netflix Is Reviving Competition Classic The Mole This Fall As long as no saboteurs get in the way.
vulture 10x10 12:00 p.m.
The Green Puzzle 5-Down, Five Letters: Actress John Travolta once called “Adele.”
the guys are fighting 11:45 a.m.
Kid Cudi Says Reuniting With Kanye West Would Take a ‘Miracle’ “I don’t see it happening. He gon’ have to become a monk.”
tributes 11:10 a.m.
Foo Fighters’ Taylor Hawkins Tribute Concert to Stream on Paramount+ The lineup now includes the Foo Fighters, Travis Barker, and Hawkins’s son, Shane.
More Stories