Ali Fazal, the Bollywood Star Who Charmed the Crown

The star of Victoria & Abdul on sipping tea with Judi Dench, making the leap from India to America, and the rapidly shifting global film industry. 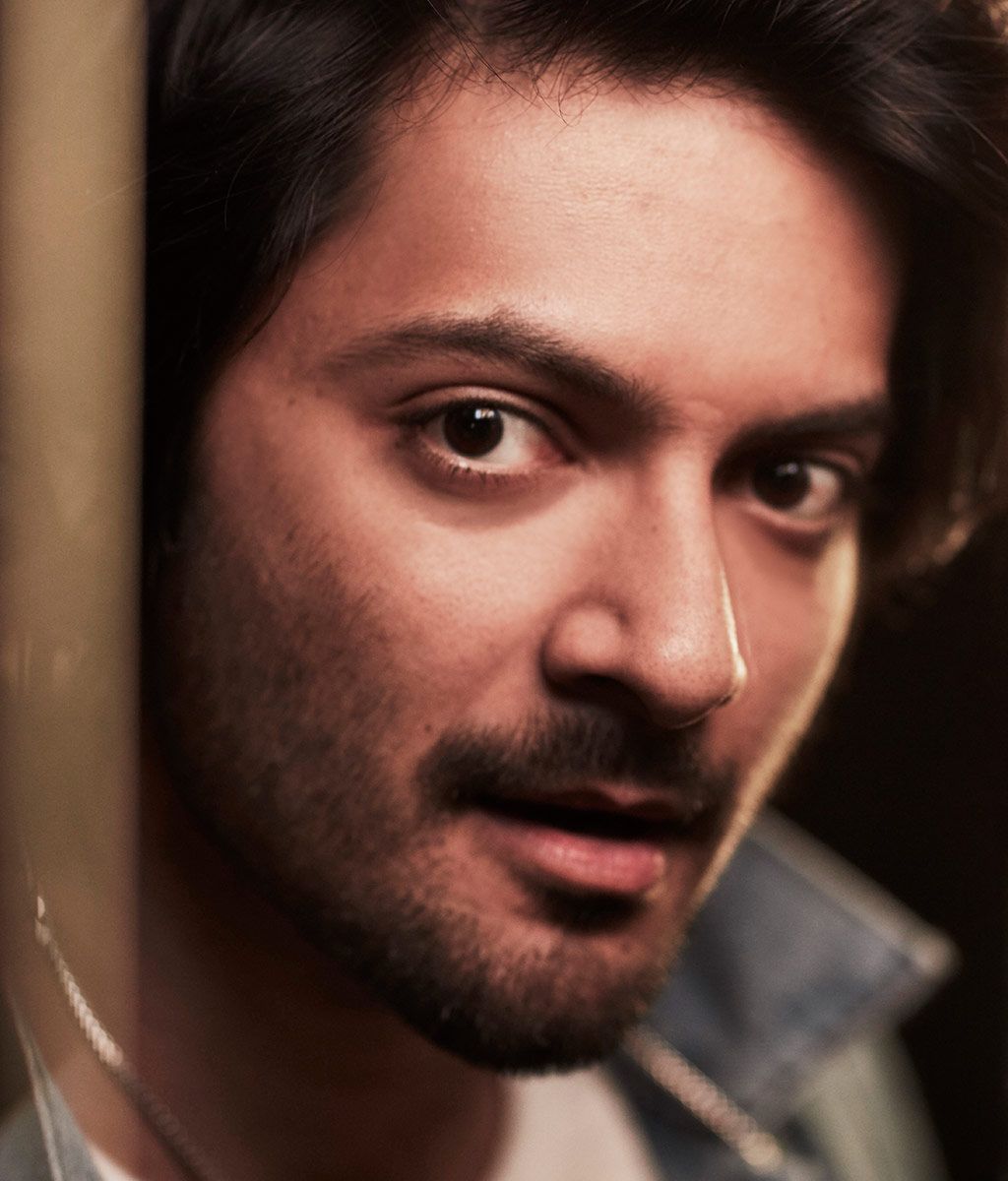 “The world’s getting smaller.”

Ali Fazal’s not mournful when he makes this observation on one gray afternoon at a French café in downtown Manhattan. He’s downright excited — India’s gotten Netflix.

The 30-year-old actor has landed at a new nexus of globalism in the Indian entertainment economy, leading him most recently to the lead role in Stephen Frears’s handsomely mounted historical drama Victoria & Abdul. A 19th-century period piece with all the pearl-and-fur accoutrements you can shake a scepter at, it’s a new tier of exposure for Fazal, who plays a servant turned adviser turned confidante to a moldering Queen Victoria (Judi Dench) with patience and sensitivity. His Abdul incidentally bridges a colossal gap between cultures as a close friendship blossoms with the queen; likewise, the movie-star handsome Fazal is poised to make the leap into Western popularity. If he feels like the world’s shrinking, it’s perhaps because he’s laid claim to more of it.

Fazal’s origins befit his transnational appeal. Born near the Ganges, he spent most of his youth moving around India and perfected both English and Hindi in a series of well-regarded schools. He enrolled in the Doon School, a boarding academy at the foothills of the Himalayas, and went on to study economics and science at college in Bombay. There, he also enjoyed a fruitful career as an athlete — until a broken shoulder cut his prospects in basketball and hockey short. (Fazal’s already got that actorly flair for drama down pat: “Suddenly, my life was over as I knew it.”)

He only took his friend’s advice to audition for a local English-language production of The Tempest because he needed a new thing to do, but found a deep gratification in playing the role of buffoon extraordinaire Trinculo. He was a bit frustrated, however, with the public’s reluctance to share his love for the theater he called home.

“Theater is almost looked down upon in India,” he explains. “There are ‘theater guys,’ you have a sling bag with a kurta, and you’re that guy. It’s a type. Which is sad, because theater gave me a lot. You gotta be smart to go from one to the other, because cinema and theater are very different things in India.”

By his own count, then, Fazal’s a pretty smart guy. After scoring a couple of dead-end roles in English-language projects — one being a forgotten 2009 sitcom in which Chris Kattan pursued Bollywood stardom — he parlayed a memorable cameo in the Hindi smash hit 3 Idiots into leading-man roles, and a solid foothold in the bustling sprawl of Bollywood.

“I didn’t have the sense of a career back then,” Fazal admits. “I didn’t have strategies. I was just trying to finish my studies, and I thought the next step would be a master’s. I had interned with the U.N. at one point, thought I might go into that. But I put that on hold, because the Bollywood movies got me busier. And I was loving it.”

It was around this time that Fazal made his first trip to the United States, not for work, but to visit a buddy in San Francisco. He instantly fell in love with the city, and like so many first-time visitors, couldn’t help but admire the American promise of potential. He’d return to the country in 2013 under professional pretenses, shooting a bit part in the seventh installment of the Fast & Furious franchise over five days in Atlanta. Though Bollywood productions command worldwide respect for their opulence and massive scale, Fazal felt like this gig took place on an entirely different tier of the showbiz world.

“I’d grown up on Hollywood movies,” Fazal recalled. “It was surreal, to suddenly be a part of this moment. Paul Walker was there, Vin Diesel, and then Kurt Russell too? I was freaking.”

That key cameo, along with his work on Victoria & Abdul, gave him some precious perspective on the gulf between the Indian film industry — a humongous business that has yet to gain a palpable foothold in the American mainstream — and the bustle of the West. He sees Frears’s film as a grounded, humanistic counterpoint to the spectacles for which Bollywood is known.

“We can’t keep making the same shit,” Fazal muses. “I think it’s changing now. The last two years have been groundbreaking for [Indian cinema], because we’re going through a big, churning period. Three years ago, we would make commercial, star-driven films, singing and dancing, and they would be formulaic and they’d make money. But the audiences are changing, now they want something different. It’s like — my girlfriend was in a film called Masaan that won two big awards at Cannes, then flopped in India.”

The complexity and specificity of Indian cinema, an industry spanning dozens of language and deeply rooted in its cultural heritage, has made exportation a trickier proposition than with many other Asian films. Moreover, Fazal supposes that the strong hand of the national government could be an additional force retarding substantive diversification of entertainment.

“The media in India is very sensitive. You say something about someone, someone gets offended — like, we can’t do an SNL in India. You’re gonna get shut down. Even right now, speaking with you, I’m thinking, ‘What if I get quoted wrong? What if the prime minister hears about it?’ It’s not right that that fear is there. When that thought stops art then something is really wrong, politically.”

Victoria & Abdul’s not exempt from this same harsh scrutiny, albeit at the hands of Western critics. Detractors have accused Frears’s film of going soft on the colonialist context of the setting, promoting a phony friendliness between the British crown and its oppressed colony. Fazal doesn’t see it this way.

“We went through 200 years of bad shit,” he says matter-of-factly. “I wouldn’t have signed up for this if I thought it was trying to forgive that … The whole point is that their visual doesn’t fit the larger narrative. The whole point is for people to look back and say, ‘Oh no, that’s wrong, she’s the oppressor and he should hate her.’ But that’s the whole point because these individuals could see through that and find some common humanity. She’s not a metaphor for the entire empire and he’s not a symbol of India’s entirety. They just sit and talk and build something unique.”

Rather than let his burgeoning success distance him from his home, Fazal has doubled-down on his commitment to staying connected with it. He currently lives in Bombay, though work has brought him to America a record four times this year, including one excursion for a “this-is-happening moment” in the form of a Vogue photo shoot. He’s settling into intercontinental fame quite comfortably, acting casual (but not too casual, not in that studied actorly way) as he recalls chatting about Shakespeare over tea and scones with Judi Dench. He’s optimistic about this shrinking world, and he enjoys watching the last pockets resisting the tide of change disappear.

“You can’t just walk in and say, ‘Change everything,’” he says. “There’s been inequality for donkey’s ears, we’ve seen that, but it’s been that many years. So it’s gonna take a while to change it. It’s gradual, but I think it’s happening. I’m seeing it! Slowly, we’re diversifying and opening up. You can’t really get away with casting white actors in Asian roles anymore. At least you get flagged for that now.”

+Comments Leave a Comment
Ali Fazal, the Bollywood Star Who Charmed the Crown

grammys 2023 3 mins ago
Will Smith Was Too Busy Shooting Bad Boys 4 to Do the Grammys Hip-Hop Tribute Saving the Grammys and Questlove from an awkward post-slap meeting.
vulture quiz 9:00 a.m.
Can You Guess What Actually Happens in 80 for Brady? 80 For Brady is one of the weirder comedies to arrive in theaters lately, so weird that describing it might make you think I am lying.
By Jen Chaney
overnights 8:00 a.m.
The Real Housewives of Potomac Season-Finale Recap: Gossip Folks The season has mercifully ended, and I hope Potomac does some tinkering in the off-season.
live from the red carpet 1:34 a.m.
Smokey Robinson Wants You Curious About His Gasms “Curiosity is going to get the best of them.”
grammys 2023 1:03 a.m.
The Highs, Lows, and Whoas, of the 2023 Grammy Awards High: Beyoncé makes history. Low: Beyoncé still can’t win AOTY.
jazz is back 12:58 a.m.
Samara Joy Sings the Old Ones, Wins Best New Artist Jazz is back, baby.
all the stars are here 12:16 a.m.
Taylor Swift Worked the Room at the 2023 Grammys Everyone from SZA to Bad Bunny to Bonnie Raitt got pics.
grammys 2023 12:09 a.m.
Harry’s House Needs a New Trophy Shelf For his Album of the Year award, which he won over Beyoncé’s Renaissance.
grammys 2023 Yesterday at 11:47 p.m.
Grammys Song for Social Change Award Goes to Iranian Protest Song Dr. Jill Biden presented the award to “Baraye,” by Shervin Hajipour.
grammys 2023 Yesterday at 10:55 p.m.
The Grammys Pay Tribute to 50 Years of Hip-Hop Who performed? Who got censored?
overnights Yesterday at 10:33 p.m.
The Last of Us Recap: Kansas City, Here We Come If they’re going to survive Melanie Lynskey’s Kansas City, Joel will need to trust Ellie more.
grammys 2023 Yesterday at 10:15 p.m.
Beyoncé Grants Grammys the Ability to Call Her Their Most Awarded Artist She officially beat Hungarian-British conductor Georg Solti.
grammys 2023 Yesterday at 10:11 p.m.
Quavo Brought Takeoff’s Chain to the Grammys Tributes also came from Kacey Musgraves, Sheryl Crow, Bonnie Raitt, and Mick Fleetwood.
overnights Yesterday at 10:03 p.m.
Your Honor Recap: Gaslight, Gatekeep, Girlboss Sorry, but it’s impossible to take Rowan fighting off Lasher’s influence seriously when she’s dressed in a polyester flapper costume.
overnights Yesterday at 10:01 p.m.
All Creatures Great and Small Recap: Take the Biscuits, Edward Mrs. Hall and Tristan deserve better than this, but at least no cows died in this episode … that we know of.
chat room Yesterday at 9:50 p.m.
Jeffrey Pierce on His New Last of Us Role and Old Last of Us Themes “I think it’s interesting and powerful to force the audience to ask, Okay, who’s the villain here and who’s the good guy?”
grammys 2023 Yesterday at 9:44 p.m.
Kim Petras Thanks SOPHIE After Historic Grammy Win “SOPHIE, my friend who passed away two years ago, who told me this would happen and always believed in me.”
overnights Yesterday at 9:17 p.m.
Your Honor Recap: Familiar Faces Your Honor continues to feel hollow as it slips further away from Michael’s agonized soul and toward being another crime drama.
grammys 2023 Yesterday at 9:06 p.m.
All of Your Faves Are Dancing to Bad Bunny at the Grammys Taylor Swift’s awards-show dancing is back in 2023.
vulture homepage lede Yesterday at 9:03 p.m.
All the Best 2023 Grammys Red Carpet Looks  Lizzo, Doja Cat, and more make the whole place [*Taylor Swift voice*] shimmer!
More Stories