Be honest: Did you think the drill would actually go into Miguel? As Van Ness probed the drill bit into that false wall, getting closer and closer to Miguel’s face, I assumed it would give him a scare but not get close enough to actually stab him. Instead, Van Ness turned the drug lord’s arm into a DIY Pinterest project.

Those are the new rules on Narcos, which has finally abandoned its ambition to offer character studies of famous criminals and just gone all-in on chaos. No scene is too big or too ridiculous for Narcos now, whether it’s Pacho opening the episode by taking over a church and demanding a grandmother’s head, a car rigged to explode that uses Montell Jordan’s “This Is How We Do It” to lure in its victims, or Chepe and Pacho watching their men massacre port personnel like they’re watching a football game.

The episode’s centerpiece goes beyond the usual Narcos race against the clock. Instead, multiple countdowns are layered on top of each other. For Jorge, the question is whether he can get his guard off the road in time, then whether he can finish dinner (toasted with Panko crumbs!) with Miguel in time, then whether he can flip off the radios before the whole plan goes south. Ultimately, Jorge’s plan hinges on getting back to his family and getting them out of the country before Miguel realizes who betrayed him.

For the DEA agents, who have been told repeatedly that a single mistake on this raid will get them deported, the raid is all about precision: whether the agents coming down from the roof will knock in the door, whether the fiscale representative will be bullied into signing the warrant, and even how long the soldier at the door can hold off the local police.

The cartel faces its own time pressure, especially after Van Ness pulls out his drill. How fast can the defense minister assistant get from his tennis practice to Miguel’s apartment? How long will Miguel’s air supply last?

By the end, Miguel wins out, but only after getting part of his arm drilled. He finally has the war he wanted, and another one besides. After collapsing into Maria’s arms, he calls Gilberto and tells him that the surrender if off. Meanwhile, Peña, Feistl, and Van Ness have to return to Bogotá to potentially get kicked out of the country, while Jorge’s escapade has cost him his family and, finally, his sense that he’s above it all. Forget trying to keep his hands clean — as the episode closes, Jorge puts together his Uzi.

Miguel finally has the war he wanted, and another one besides. After collapsing into Maria’s arms, he calls Gilberto and tells him that the surrender if off.

Speaking of Miguel’s many foes, the North Valley cartel gets some more detailing in “Sin Salida.” We learn that Salazar’s mother Gerda has, deliciously, risen to the level of a cartel partner herself. If only Navegante had taken her out when he had the chance! Beyond the fact that one side is led in part by a grandmother, the main difference between Cali and North Valley at this point is that North Valley is significantly crazier — a fact Narcos relays by way of a close-up chainsawing.

I wish Narcos would resolve how much Miguel approving the hit on Salazar so he could get to Maria is to blame for this war. It obviously didn’t help, but Orlando and his partners were already grumbling about the surrender terms even before Salazar’s murder. Was Miguel’s crush on Maria his fatal mistake, or was taking out Salazar just a preemptive strike? It seemed bound to happen no matter what Miguel did, as Peña narrates: “The No. 2 guys realize the No. 1 guys are on their way out, so they decide to speed things up.”

This episode also explains that Cali, despite its power, isn’t in a great position at the start of the war. They have more political connections and probably more sicarios than North Valley, but they’re bleeding allies as North Valley controls the key cocaine port. Good news for Cali, though: The port is totally undefended!

Chepe and Pacho take it over with just a couple trucks full of gunmen, with the ease of the attack giving Chepe and Pacho some time to catch up and worry about the Rodriguez Orejuela brothers. The cartel might be doomed, but it’s fun to watch Chepe and Pacho commenting on the trip down.

• I find that it’s helpful to categorize people in terms of this semi-popular Twitter meme, in which every crew is made up of truck freaks, crazy asses, layed backs, and fighters.

I thought I’d apply this lens to better understand the Cali cartel. 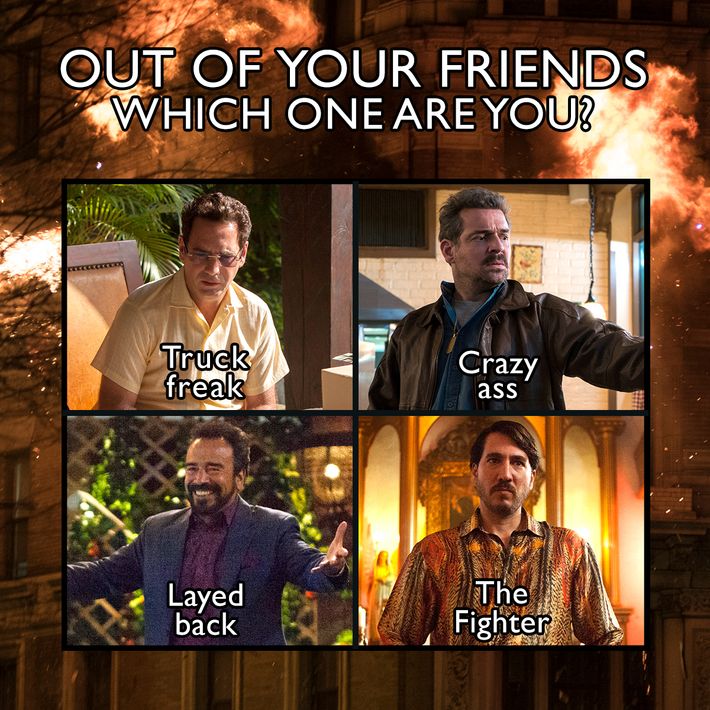 Have your say in the comments — I think each one seems spot-on, except for Miguel, who only displays the logistical fixations that could transfer from cocaine shipments to truck hydraulics.

• The Catholic general splitting theological hairs with Peña was great. Peña’s face says it all: I needed an uptight law-enforcement guy, but did he have to be this uptight?

• Even David is great in this episode. Rather than glaring at Jorge and cutting off heads, he’s shown in a real panic … then eventually breaking a little smile when he finds out his dad dodged the raid.

• Devastating rejoinder from Jorge’s wife as he tries to wriggle out of the cartel: “We weren’t poor, Jorge. We always had choices. This was your choice.”

• The idea that you can take over a port by just killing all the people who work there is a very Grand Theft Auto theory of organized crime.

• The episode features a rare glimpse of Fun Miguel, this time as he does drunk cooking.

• Bad news for Pacho’s deceased Mexican boyfriend: Pacho’s main takeaway from the Mexican imbroglio is that his brother’s injuries mean he might be sexually out of action. And at just 22 years old, the cartel partners note sadly.

• The fiscale warrant guy is perfectly cast, sending off kind of a Colombian John Hodgman vibe.

Pedro Pascal on Returning to Narcos As Its Leading Man

+Comments Leave a Comment
Narcos Recap: This Is How We Do It