There are many recurring motifs peppered throughout Twin Peaks: The Return — electricity and tulpas, anyone? — but David Lynch, ever the secretive fellow, will never divulge the meaning behind any of it. (He’s mastered the art of politely refusing to answer narrative-based questions for decades now.) But likely due to being in a good mood while celebrating his second annual Festival of Disruption this weekend, Lynch temporarily tore back the curtain and shared a nice story about the often-seen bronze statue Dougie Jones is transfixed by in Las Vegas. You know the one: It’s in the plaza outside the Lucky 7 insurance agency and features a Western-dressed man shooting a pistol into the oblivion, which led many viewers to suspect it was an homage to David Bowie’s role in The Man Who Fell to Earth. In fact, it wasn’t a meta moment of remembrance for the since-deceased Twin Peaks actor, but rather a way for Lynch to poignantly pay tribute to his dad, Donald Lynch.

“My father, when he was 19, worked at a fire tower. They’re way up in the air,” Lynch explained during his Sunday-afternoon talk. “He had to hike once a week for five hours to get water and food, and then hike back, and then climb way up in this tower to scout out smoke and fire and call out to the firefighters if he saw anything. I’m not sure if he took the first selfie, but with a string he managed to take a picture of himself holding a pistol out with a stance, and that was the impetus for the statue.” With this image in mind, Lynch requested the custom-built work of art for Dougie’s scenes, although the aesthetic results were a little more mixed than he would’ve liked: “It doesn’t even look like him really,” he said, “but it’s the pose.” 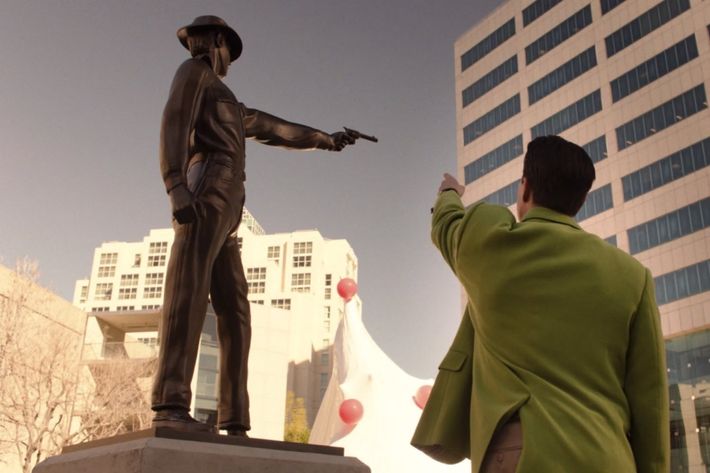 The Best Post-Finale Theories About Twin Peaks: The Return

+Comments Leave a Comment
Dougie’s Twin Peaks Statue: The Meaning Behind It

gma3 goss: what you need to know 9 mins ago
Sorry, Were We Interrupting Something on GMA3? T.J. Holmes and Amy Robach were a giggly duo of hosts for the first time since news of their relationship broke.
villainous behavior 6:03 p.m.
Los Espookys Canceled by HBO, Enemies of the Moon HBO needs to sit in the corner and think about what they’ve done.
oscar futures 5:37 p.m.
Oscar Futures: Is the Academy Ready to Forgive Will Smith? He’s banned from the ceremony for the next ten years, but could Will Smith nab a nomination for Emancipation anyway?
By Nate Jones
tributes 5:07 p.m.
Takeoff’s First Posthumous Verse Appears on Metro Boomin’s New Album Alongside A$AP Rocky on “Feel the Fiyaaaah”
power rankings 4:46 p.m.
The Final Survivor Season-43 Power Ranking A last look at who is in the best position to win it all.
vulture lists 4:30 p.m.
A Ranked Guide to John Wick–Inspired Movies Evaluating the latest generation of stunt-heavy, fist-fighting action movies, including this weekend’s Violent Night.
follow friday 4:20 p.m.
Brian Robert Jones Has a Root Canal After This We chatted with the musician about being a rough hang, boy bands, and Caleb Hearon.
delectable 4:18 p.m.
Hollywood Couldn’t Risk Making a Movie Like Bones and All Luca Guadagnino knew Hollywood didn’t have the requisite taste for flesh. So to finance his first American-set movie, he turned to an Italian backer.
masters of press 3:41 p.m.
Keke Palmer’s Nope Press Tour Deserves an Archive She does her Angela Bassett impression … with Angela Bassett!
theater review 2:45 p.m.
Ain’t No Mo’ Takes a Jubilantly Unrespectable Flight to Broadway Jordan E. Cooper’s satire doesn’t button up in a bigger venue.
now streaming 2:42 p.m.
The 5 Best New Movies and TV Shows to Watch This Weekend Let Matt Rogers and David Harbour usher in your holiday season.
fandom 2:35 p.m.
No, That Wasn’t Danny DeVito You Just Saw at a Party in Bushwick Just hundreds of semi-bald lookalikes.
vulture lists 2:26 p.m.
The Most Horrific Twilight Character Backstories, Ranked by Absurdity You only get a glimpse of Stephanie Meyer’s twisted mind in the movies, but the books really let the freak flag fly.
ho ho ho 2:18 p.m.
Sexy Santas, Ranked There’s something about that twinkle in his eye …
awards szn 2:04 p.m.
New York Film Critics Circle Gets the TÁR Love STÁRted Along with wins for RRR, Aftersun, and Marcel the Shell With Shoes On.
workaholics 1:47 p.m.
So You Thought BTS Was Going on Break? LOL A guide to their solo projects and upcoming group activities (so far).
overnights 1:33 p.m.
Slow Horses Recap: Walk Into It After the combustible season-two premiere, “From Upshott With Love” taps the brakes a bit too hard.
the industry 1:13 p.m.
What the Holiday 100 Reveals About Our Love of Christmas Music It’s Mariah’s world (obviously) — but Ariana and Kelly are settling into it.
going analog 12:42 p.m.
Patti Smith’s Worldview Finds a New Format in the Beautiful A Book of Days The punk icon’s visual artistry is on full display in her new photography collection.
vulture 10x10 12:11 p.m.
The Monopoly Puzzle 15-Across, Six Letters: Setting of Bella and Edward’s first kiss.
More Stories