Update: The book originally ranked No. 9 on this list, Beneath the Sugar Sky by Seanan McGuire, actually won’t be released until January 9, 2018. We have replaced it and adjusted the rank accordingly, moving the previous No. 10 title, The Prey of Gods, up to No. 9. Consider the Sugar Sky mix-up a spoiler for the 2018 version of this list.

Well, this was certainly a year in which we all could use a little escape from reality. Fantasy novels offered us new worlds to explore or alternate visions of our own, though hardly all of that is respite — in these new imaginings come parallels and allegories, direct or subtle, that reflect and refract our familiar world through magic, monsters, and impossibilities made real. Here are the ten best fantasy novels of 2017. 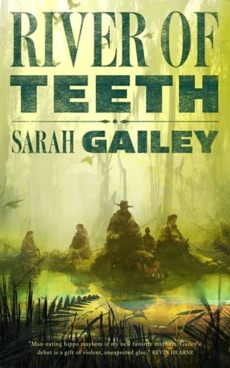 In this alternate history, Sarah Gailey asks, “What if hippopotamuses?”: What if hippos were brought to Louisiana around the turn of the 20th century to be farmed for meat? And what if those hippos were vicious predators, unsuited for domestication? (That part isn’t so much of a leap, since it’s true about hippos of any world.) Gailey’s protagonist, Winslow Houndstooth, is hired by the U.S. government to clear a Mississippi marsh of its feral hippos. He and his crew are hippo-riding cowpersons, and what follows is an alt-history Western romp, rich and strange and snappy at basically novella length. Gailey plays with genre, but never conforms to it — there is plenty of romance and violence, but a surprising amount of subtlety, too, for such an outlandish premise.

The Prey of Gods 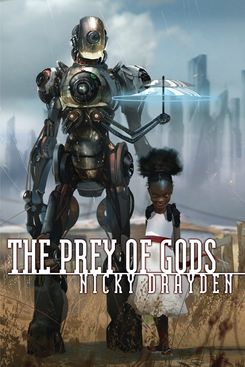 One of the biggest pleasures of this book is the plurality of its voices and story lines, and the way Nicky Drayden skips and weaves between them. It is 2064 in South Africa, and … a lot is going on. An ancient demigoddess seeks to restore her evil powers while a Zulu little girl ascends to demigoddess status herself. A hallucinogenic drug sweeps the population, unlocking animal identities and psychic powers. Robots are gaining sentience. And amid it all, people are falling in love, exploring their identities, and trying to save the world. It’s a book full of energy and momentum, strange wit and sensitivity. It is a LOT. And it is wonderful. 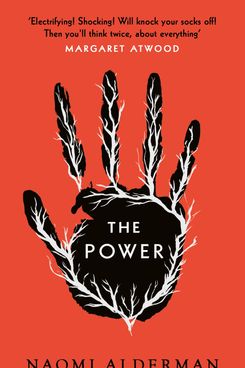 The Power begins with a simple premise with far-from-simple repercussions: Young women discover they are suddenly able to produce, with their bodies, a deadly electrical charge. As the titular power spreads — older women are able to awaken it within themselves, too — women become dangerous in a way they’ve never been, and the balance of societies around the world is shaken and even upended. Alderman’s imagining of the global fallout is the perfect balance of surprising and inevitable. She gives us a remarkable feminist parable that shows us what could happen to society and we say, “Ah, of course. This is who we are.”

The Bear and the Nightingale 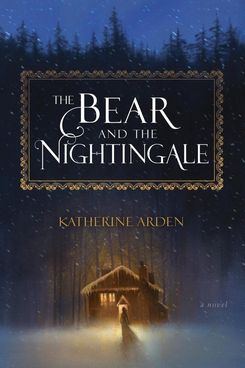 Arden evokes a vivid version of medieval Russia, all snow and woods and biting cold, blending fairy tale and fantasy for a lush and engrossing story. Vasya is, in many ways, a quintessential young fairy-tale heroine — she has a kindly father, a deceased mother, and now a new stepmother with whom she is irrevocably at odds. And also: magic. Vasya has inherited, from her mother and grandmother, the ability to see the spirits that pervade her world. It turns out that Vasya’s new stepmother can see the spirits, too, but she calls them demons and fears them, and forbids Vasya from any contact with them. But, as we know from fairy tales, attempting to deny the old magic only makes it stronger and more dangerous. Can they live happily ever after?

The Stone in the Skull 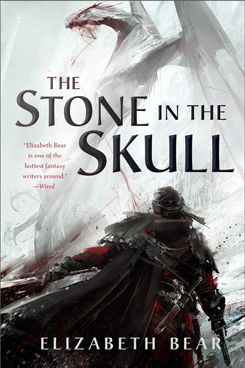 With The Stone in the Skull, Bear begins a new trilogy in her world of the Eternal Sky, following two characters: a brass automaton called the Gage and an ex-bodyguard called the Dead Man. They seek to bring a wizard’s message to the warring factions of a fractured empire, the Lotus Kingdoms — and, of course, become entangled as more than messengers. What follows is utterly engrossing, but keep in mind, for expectations’ sake, that this is more the first third of one epic narrative than the first book in a series of three — grand plans are set in motion, but very little gets resolved. Yet Bear doesn’t work only at large scale. She is equally adept with the sweeping forces of power, politics, and war as with the intimate relationships between individuals, which are both powerful in this book. 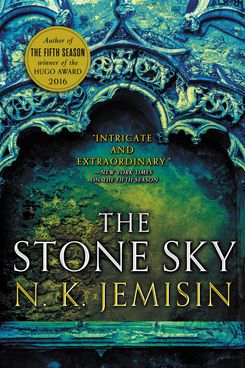 The culmination of Jemisin’s Broken Earth trilogy is a more powerful and satisfying conclusion than we could’ve hoped for, as mother and daughter Essun and Nessun draw toward reunion and confrontation. A confrontation which will also, of course, determine the fate of the world. Even as the trilogy draws toward its end, Jemisin continues to expand the reader’s understanding of her brilliantly conjured world. For all of its wild imagery, it contains powerful parallels with our own, as Jemisin explores themes of power and oppression. Yet The Stone Sky is never didactic — this is a complex and engrossing narrative that builds toward a heart-pounding climax, securing the Broken Earth’s place as one of the greatest fantasy series of all time.

The City of Brass 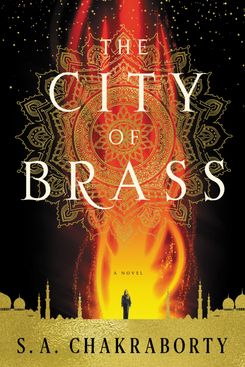 The City of Brass is more than a promising debut — it beguiles all the way. It begins in 18th-century Cairo, where a con woman named Nahri fakes mystical powers of healing and fortune-telling to fleece her marks. When one of her “exorcisms” turns out to be real, she meets Dara, a djinn warrior who tells Nahri that she is in danger and that she must come with him to Daevabad, the city of the djinn. There she finds a world of magic, power, and intrigue — and, possibly, a birthright to reclaim. Chakraborty’s research and imagination are equally strong, and she deftly sets up a rich world — and ample suspense — for the rest of this trilogy. 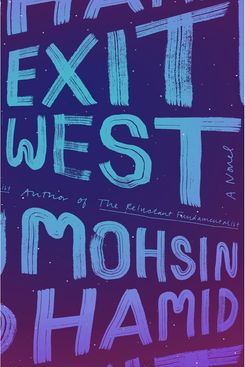 Exit West begins in a frighteningly un-fantastical situation: In an unnamed city, beset by violence and the threat of civil war, a man and woman meet. Saeed and Nadia find common ground — and, eventually, love — despite his adherence to conservative tradition and her rejection of it. As the city falls to chaos, Saeed and Nadia seek escape. They have heard of magical doorways that lead … they are unsure where, but at least to elsewhere. Through these portals, Saeed and Nadia join the flood of refugees pouring out of magical doorways around the world. Part parable and part love story, this is a sad, magical, exquisitely beautiful novel that imagines a harrowing world just different enough from ours to offer a real measure of hope.

The Book of Dust 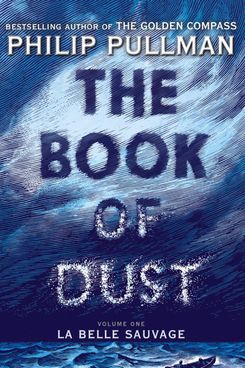 Philip Pullman’s follow-up — it’s an equal, not a prequel — to his beloved and lauded His Dark Materials series miraculously never feels superfluous. Instead, it’s a delicious return to Pullman’s particular, rich world, and an expansion and deepening of the story we already know. In this first volume of The Book of Dust, La Belle Sauvage, a young man named Malcolm becomes entangled in the machinations to pursue — and protect — a 6-month-old baby. The baby is Lyra, the heroine of Pullman’s prior series, and Malcolm strives to get her to safety as a massive storm inundates Oxford. Where His Dark Materials was Eden and the Fall, here we have the Flood, with all of Pullman’s poetry, humanity, and page-turning plots. 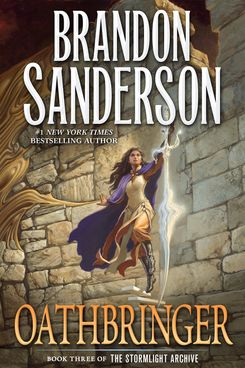 Oathbringer, No. 3 in the ongoing Stormlight Archive series, continues the story of a band of humans fighting to unite their world in the face of an apocalyptic threat. Now, the Voidbringers and the Everstorm have come to Roshar*, and the fledgling Knights Radiant face threats from within and without. This is classic epic fantasy at its contemporary best — filled with knights and monsters and a complex system of magic that becomes even more impressive as we learn more about the supernatural underpinnings of this world. But Sanderson’s real genius is the humanity he brings to his work — and in Oathbringer he reaches new heights. It deals, gently and sensitively, with depression, addiction, and trauma. Sanderson also crafts the most believable and well-earned falling-in-love I’ve ever read, in any genre. This is 1,200 pages without a slow moment, a truly incredible, engrossing, and delightful feat.

*This article originally misstated the name of the world in Oathbringer. We regret the error.

+Comments Leave a Comment
The 10 Best Fantasy Books of 2017