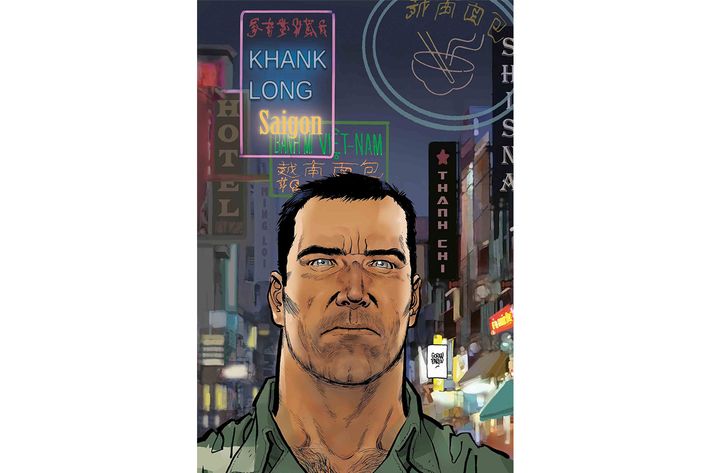 Punisher: The Platoon by Garth Ennis, Goran Parlov, and Jordie Bellaire (Marvel)
This sucker is brand synergy at its best. Just in time for the debut of last month’s Netflix series about the Punisher, Marvel’s premier lethal enforcer gets a new mini-series that instantly places itself in the upper echelons of the character’s narrative rankings. Though he didn’t create Frank Castle, writer Garth Ennis long ago became the most acclaimed writer of that vigilante’s oft-depressing adventures, and he hasn’t lost his deft touch. Here, we get an adults-only vision of Frank’s pre-Punisher days as a soldier in Vietnam, specifically his first experience of real, live combat. Ennis is a war nerd and he crams a wealth of detail and old-hand observation into The Platoon, as well as a welcome dose of lived-in storytelling about a Communist guerrilla who stands on the other side of the conflict. But perhaps the greatest treat comes in the form of the jaw-dropping artwork from penciler Goran Parlov and colorist Jordie Bellaire, two titans of mainstream sequential art who conjure up a quagmire that is as anxious as it is gorgeous. 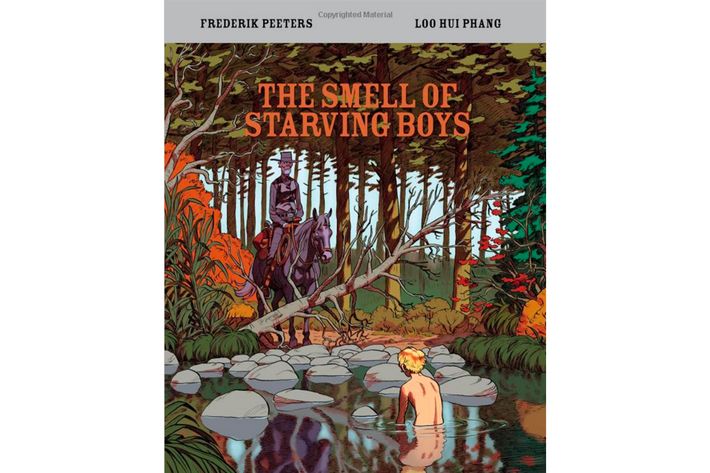 The Smell of Starving Boys by Frederik Peeters and Loo Hui Phang (SelfMadeHero)
The heyday of the comic-book Western is, alas, long gone. But intriguing tales of wide-open spaces still pop up now and then, and The Smell of Starving Boys is a welcome addition to that tradition. It follows a trio of mismatched travelers on an expedition through Texas in the aftermath of the Civil War: one is a dapper Irish photographer, another is a teenager who harbors more than a few secrets, and they both live in resentment of their Manifest Destiny–loving boss, who forms the third point of the triangle. Against the backdrop of Loo Hui Phang’s magnificent vistas, Frederik Peeters’s story turns out to be far more than it initially seems. This queer, supernatural, deliciously sexy tome will be a delight for anyone who enjoys a little trip to the frontier. 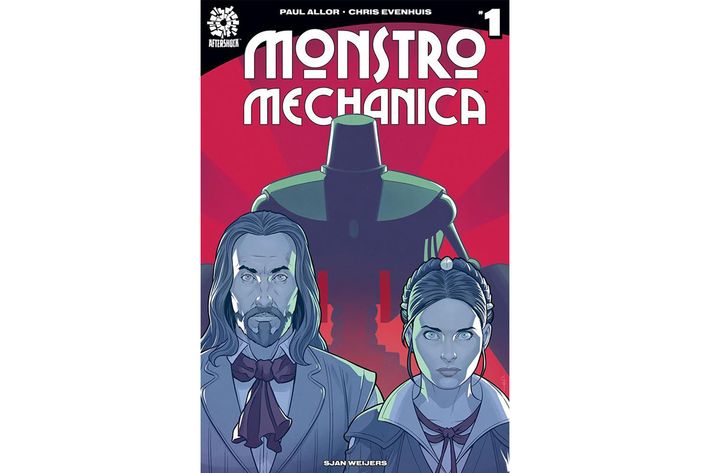 Monstro Mechanica by Paul Allor, Chris Evenhuis, and Sjan Weijers (AfterShock)
Monstro Mechanica is a comic where Leonardo da Vinci fights assassins with the help of a cross-dressing female sidekick and a giant steampunk robot. What else do you need to know? In this promising new series from underrated writer Paul Allor and underrated artists Chris Evenhuis and Sjan Weijers, published by underrated publisher AfterShock, you’ll find a deliriously fanciful vision of Florence circa 1472. It’s populated by such notables as the aforementioned master artist-inventor, the sinister Medici family, and a young Niccolò Machiavelli, and the storytelling is as crisp as the line work. What could easily feel like a cheap set of historical references blissfully turns out to be a lived-in and genuinely funny bit of action-dramedy. You’ll find yourself wondering how long it’ll take before someone wises up and snatches it up for a TV show. 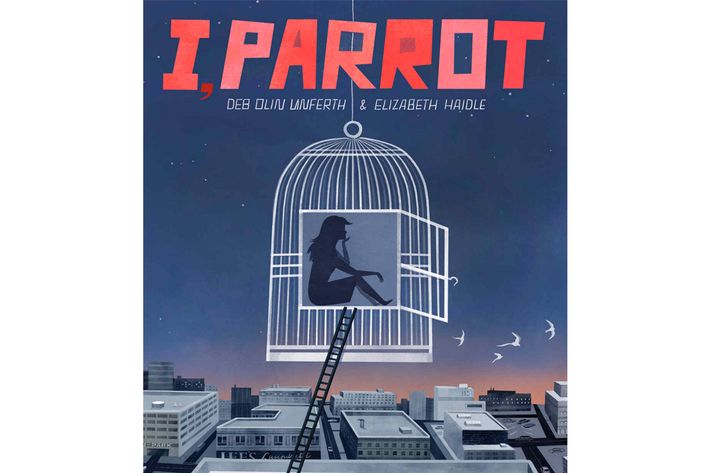 I, Parrot by Deb Olin Unferth and Elizabeth Haidle (Black Balloon)
Tales of personal growth in the wake of romantic disappointment abound in the world of comics literature. But I, Parrot distinguishes itself by balancing that well-worn topic with a fresh and idiosyncratic complement: plentiful scenes about bird-sitting. In Deb Olin Unferth and Elizabeth Haidle’s graphic novel, a woman named Daphne finds herself taking care of her self-help-guru boss’s menagerie of avian creatures, alongside her new boyfriend and the son she bore in a collapsed marriage. Through distinctive, paper-cutout-esque visuals and enticingly introspective text, the reader is presented with a story that is at once strange and relatable. As the bird gig goes from straightforward to woefully complex, we’re taken on a compelling journey of self-discovery that swoops by, not with the shrillness of the titular parrot, but rather with the understated beauty of … maybe a sparrow? Whatever, I don’t know anything about birds, but I do know good comics, and this is one. 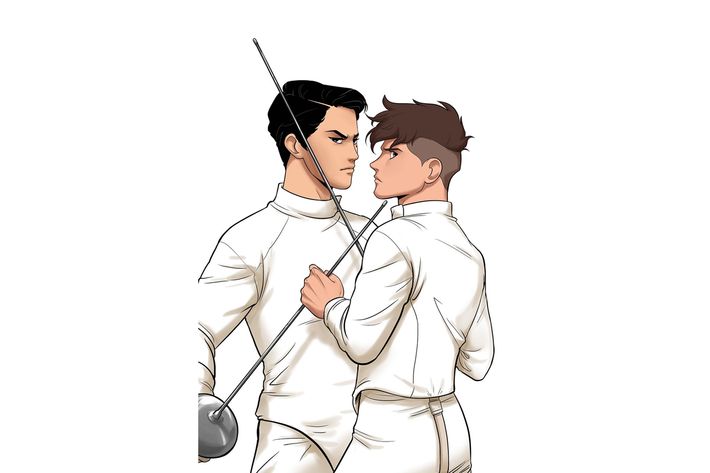 Fence by C.S. Pacat, Johanna the Mad, and Joana Lafuente (BOOM!)
There simply aren’t enough sports comics in this great continent of ours. In Japan, shelves are stocked thick with manga about the ins, outs, ups, and downs of athletic competition, but Americans are comparatively deprived. How lucky we are, then, to have Fence. Writer C.S. Pacat and charmingly named illustrator Johanna the Mad have emerged from the world of online publishing and created this new series about the trials and tribulations of a shabby aspiring fencer and an uptight world champion who face each other and learn that their destinies will soon be intertwined. The artwork is crisp and dynamic, managing to draw on Japanese influences while retaining its own unique identity (the color work from Joana Lafuente is particularly exciting); and Pacat’s text is a breezy thrill. If you’re one of the many thirsty Americans who recently fell in love with ice-skating anime Yuri on Ice and need a fix before the second season hits, Fence should leap to the top of your buy list. 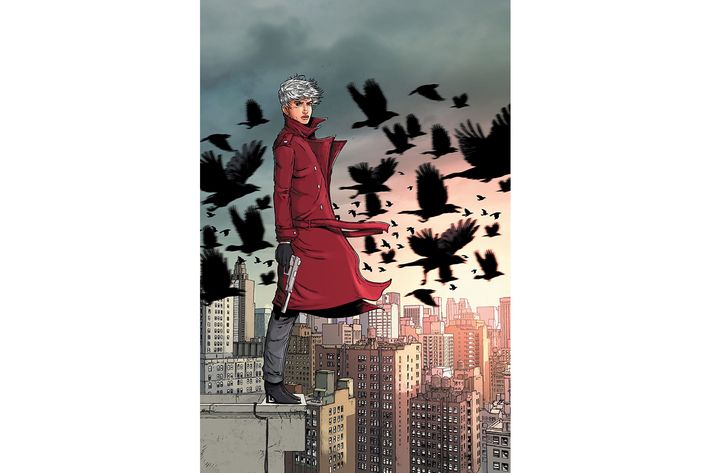 The Wild Storm by Warren Ellis, Jon Davis-Hunt, and Steve Buccellato (DC)
Without Warren Ellis’s work on the original incarnation of Wildstorm comics, the entertainment landscape would look quite different today. I say “entertainment” and not just “comics” because his collaborations with Bryan Hitch on Stormwatch and The Authority formed the earliest blueprint for the look and feel of the cinematic superhero boom, especially the Marvel Cinematic Universe. As such, it’s wonderful to see Ellis return to the characters he so ably manipulated around the turn of the millennium. In The Wild Storm (that space between “Wild” and “Storm” is as deliberate as it is mysterious), the scribe has teamed up with the spectacular art team of penciler Jon Davis-Hunt and colorist Steve Buccellato to construct an intricate new narrative set in a brand-new universe, but which introduces reimagined versions of familiar characters like Grifter, the Engineer, and Henry Bendix. They’re all trapped in an increasingly sticky web of secrets that threatens the fragile Jenga tower of the world’s hidden power structures, and it’s a total joy to watch the ways they navigate each other’s lies and schemes. Though one may recognize some of the folks in this story, it’s anybody’s guess as to how their tale is going to play out. 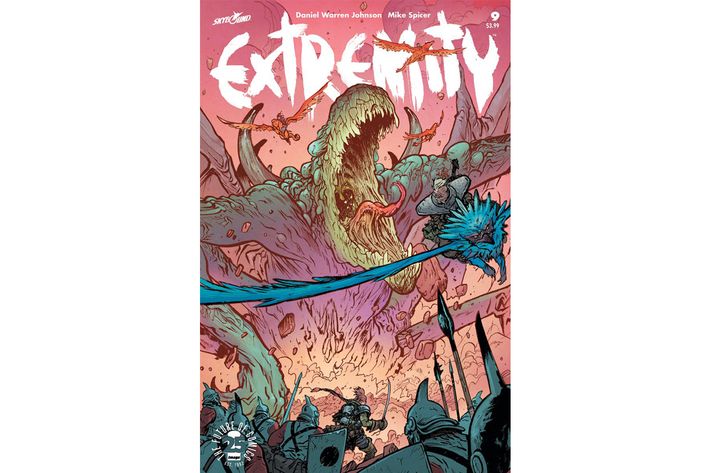 Extremity by Daniel Warren Johnson and Mike Spicer (Image)
What a gorgeous comic. In the creator-owned Extremity, writer-artist Daniel Warren Johnson has constructed one of the best new titles on the market, filled with space-opera bombast and jagged-edge brutality. It follows a young aspiring artist who was robbed of her hand in a war between two clans in a cruel, sci-fi world where the privileged few sit in palaces on floating clifftops, lording over the desperate have-nots below. We watch as the protagonist deals not only with the ongoing war between her father’s clan and their blood-enemies, but also with her dad’s outmoded rules about who does and doesn’t get to commit acts of violence. The resulting comic has the sweeping quasi-feudalism of Dune, the bloodiness of Game of Thrones, and — improbably enough — the dreamer’s aspirations of a Disney movie. And don’t sleep on Mike Spicer’s colors, either: He paints Johnson’s work with such an expertise for mood-setting that you’ll feel as though you can walk right through the page, mount an airship, and go to war yourself. 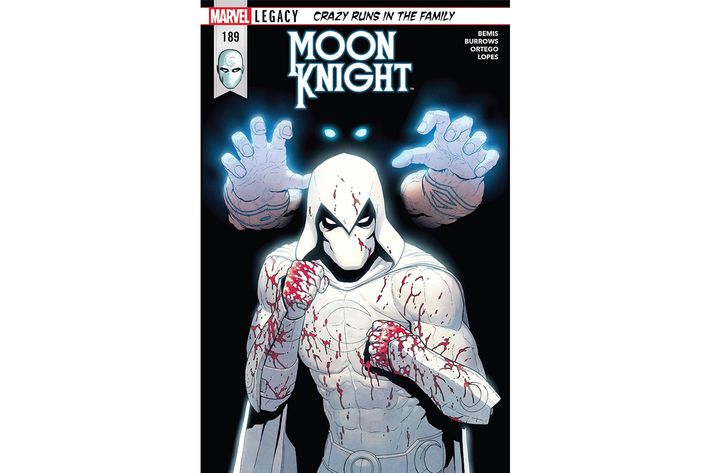 Moon Knight by Max Bemis, Jacen Burrows, and Mat Lopes (Marvel)
It’s truly bizarre how good Moon Knight has been in recent years. First came a fantastic run with the character, helmed by Warren Ellis and Declan Shalvey, more recently there was a somehow-even-better one led by Jeff Lemire and Greg Smallwood, and now the series is setting itself up for yet another stunner from writer Max Bemis (yes, I mean the front man for Say Anything) and artists Jacen Burrows and Mat Lopes. We’re only one issue in, but hoo boy, it was a humdinger. The titular superhero didn’t really appear in it; instead, it focused on a doctor who knew him and is currently treating a charming and deranged ex-soldier who believes he’s tapped into forces of Egyptian myth. Bemis, like Gerard Way before him, is proving himself to be a musician with a gift for comics construction, offering up a narrative steeped in dread and grandeur. But the biggest reason to show up, in my humble opinion, is the artwork. Burrows has proven himself in the unforgettable Alan Moore–penned small-press series The Courtyard, Neonomicon, and especially Providence, and his brand of viciously upsetting facial expressions and violence is a welcome change from everything else Marvel is currently publishing.

+Comments Leave a Comment
8 Comics to Read in December

shady 10 mins ago
Dakota Johnson Calls Fifty Shades ‘Psychotic’ ‘Big Naked Movies’ “I haven’t been able to talk about this truthfully ever.”
overnights 17 mins ago
The Bear Recap: Are We Good? This episode last just long enough for The Beef to completely implode.
switched on pop 22 mins ago
The House Music That Beyoncé Built  Her new single, “Break My Soul,” taps into the genre’s long, vibrant history.
reset point 5:48 p.m.
7 Big Questions About That Umbrella Academy Ending The Hargreeves siblings may be cool with simply accepting this new reality, but the rest of us have some follow-ups.
crisp rat 4:38 p.m.
Chris Pratt Is Not a Chris(tian) Update your Hollywood Chris rankings, folks.
stand-up 4:31 p.m.
This Weed Joke Is As Potent As Today’s Weed Comedian Ralph Barbosa’s Don’t Tell Comedy set sneaks material about guns and taxes into clever jokes about weed.
coming soon 4:16 p.m.
HBO Orders True Detective: Night Country to Series True Detective will be back on your TV, because time? She’s a flat circle.
overnights 4:03 p.m.
The Bear Recap: A Delicate Ecosystem Because what Chicagoan hasn’t been at a bar at 6:45 a.m.?
oscar alert! 3:00 p.m.
Billie Eilish Can Vote at the Oscars If She So Chooses But would she have voted for Judy Garland over Grace Kelly in 1955?
vulture lists 3:00 p.m.
7 TV Comedies You Can Safely Recommend to Your Parents They’ll tell you how nice these shows are at your next FaceTime.
dancing through life 1:14 p.m.
Britney Spears Remembers Conservatorship ‘Restrictions’ During Vegas Residency She once had to ask for a doctor’s permission to take Tylenol.
delicious bits 1:10 p.m.
A Deep, Sticky Dive Into John Early and Kate Berlant’s Hot-Caramel Joke Caramel is the new crypto in their special, Would It Kill You to Laugh?
By Rebecca Alter
the baz of it all 1:09 p.m.
Counting the Baz-isms in Baz Luhrmann’s Elvis Baz Luhrmann can do many things, but he cannot do less — especially not in Elvis.
overnights 1:08 p.m.
Money Heist: Korea Recap: Running Scared Money Heist: Korea brings its K-drama bona fides in the most romance-forward episode yet.
hashtag pride 1:05 p.m.
Heath Ledger and Jake Gyllenhaal Could’ve Had Sex ‘All the Time’ If Pedro Almodóvar got to direct Brokeback Mountain, that is.
chat room 1:00 p.m.
P-Valley’s J. Alphonse Nicholson on Showing Lil Murda’s Tender Side “It was very selfless to comfort his friend, his ex-lover, his once-companion. I don’t think we’ve ever seen anything on TV like that before.”
vulture 10x10 12:00 p.m.
The AI Puzzle 8-Down, Five Letters: Secret snack for Lady Bird.
how to herogasm 11:05 a.m.
6 Behind-the-Scenes Details About the Superhero Orgy in The Boys’ ‘Herogasm’ The stickiest episode yet.
talking to 10:55 a.m.
Welcome to the New York Nicoverse Grabbing sandwiches with Nicolas Heller and his band of unlikely food influencers.
By Jason Diamond
trailer mix 10:48 a.m.
Come, Little Millennials, the Hocus Pocus 2 Teaser Will Take Thee Away Something something virgins, something something black-flame candle.
More Stories