Icy stares and well-polished accents aside, one of the biggest marvels of Netflix’s The Crown is its strategic use of fashion. Every look is literally fit for a king or queen, so kudos to all of those required fancy regal events. (And, of course, that $100-plus million Netflix budget.) Jane Petrie, the costume designer for The Crown season two, was the creative genius behind all of these wardrobes, which called for a painstaking attention to detail and months-long dedication to research across various media. “I spent a lot of time prepping,” she recently told Vulture with a laugh. “Books, magazines, films, old newsreels. That’s just about me learning how to be accurate.” Below, Petrie described what the process was like to create (and re-create) eight of the season’s most memorable looks.

Elizabeth’s gown and Philip’s robe were actually the easiest part of crafting these ceremonial looks, which were on display when Elizabeth crowned her husband with a “prince” title. As Petrie explained, the hardest part was creating the seemingly understated insignia on both of their outfits. “We’ve got a secret weapon, who’s a ‘royal adviser’ to the show. He was on set all day every day, available to answer questions to any department that needed it — particularly when it came to etiquette and accuracy. So when we wanted to find out about medals and insignia, we could talk to him. And if we felt like we needed to find an appropriate outfit for an actual event, then I could check with him.”

Despite Margaret’s frustration about the creative direction of her annual birthday portrait, the design team had a blast creating the look from scratch — and with an aesthetic that predates the time period by a decade or two. “We decided that it told the story of that scene really despite the look being predated,” Petrie said. “[Showrunner] Peter Morgan really advocated for that dress, so we stuck with it. It takes a bit of experimentation to get it to be what you want it to be. We screen printed silk to design of the butterflies and embroidered them with sequins and handwork. It’s such a quintessential princess dress.”

When Margaret hooks up with Tony 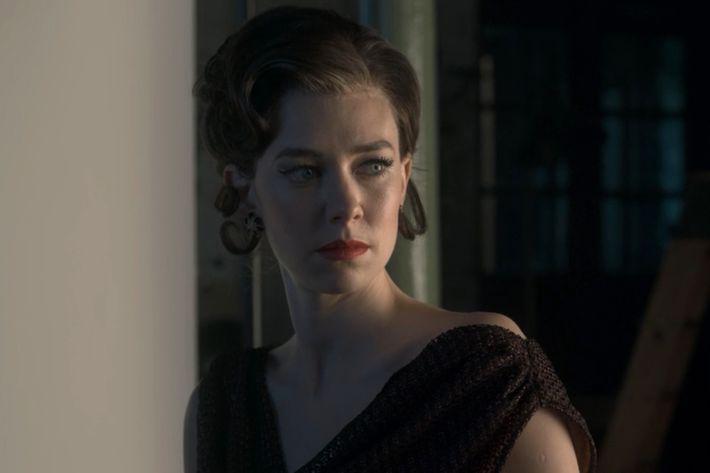 In one of the season’s steamiest scenes, Princess Margaret and Antony Armstrong-Jones begin their smoldering fliration in his photo studio. It called for an outfit that was sensual, yet classy, and easily movable. “We needed to have a dress that covers her shoulders that Tony can just push off, which is such a forward thing to do. That would’ve been a big deal, and it certainly would’ve caught Margaret off guard by how forward he was being,” Petrie said. “Some of her earlier dresses, because of the fashion of those earlier periods, we had seen her bare shoulders before, so we didn’t want to start with bare shoulders, because we needed to be able to take it somewhere.” Ultimately, the end result had to “shock” the viewer with Tony’s behavior: “It’s the last time we used that shape and silhouette. You say good-bye to one Margaret and hello to another.”

The stark juxtaposition of the queen’s red coat, red hat, and red background was a happy accident for Petrie and her team, as she didn’t initially set out to dominate the scene with one color. “When I chose it, I didn’t see it as a red,” she explained. “In the edit afterwards, it was slightly heightened in production because it was more of a hot rose color.” Nevertheless, since the scene was a turning point for how the public perceived the queen and her royal family, having her dress make her seem “distant from the public” was a deliberate priority. “I wasn’t being symbolic, I was trying to make her seem isolated from people,” Petrie continued. “When you trust your instincts, things happen that you’re sometimes unaware of. I try not to be too academic about things, because if you’re too academic, it can come across as not very real.”

Margaret’s dress was heavily photographed during her public spectacle of a wedding, so there wasn’t much room for interpretation when it came to recreating the look. Instead, the main challenge was actually tailoring the dress for Vanessa Kirby, who is a solid seven inches taller than the actual Margaret. “It was finding the right fabric,” she explained. “There’s a lightness to that dress, which seems fresh compared to all of the ballgowns we’ve seen up to that point. There’s a quality and simplicity to it that’s brilliant.” Each layer of the organza had to be properly tailored and layered, so Kirby wouldn’t be weighed down by excess fabric. “The top layer was a finer organza than the layers that were underneath,” Petrie said. “It’s not frothy. It’s a clean silhouette. We needed to find the right weight so it doesn’t collapse under itself. That was the challenge there.”

When the queen meets the Kennedys

When President John F. Kennedy and his wife, Jackie, visit Buckingham Palace, the chicness of Jackie O.’s European sensibilities are directly contrasted to the queen’s homier aesthetic. Or as Petrie summed it up, “The clarity and the simplicity of the 1960s design has arrived and Elizabeth isn’t there yet. Her story is that she was often trapped in the palace and completely out of touch.” As with Margaret’s wedding dress, there was little wiggle room when it came to this real-life outfit, with the only difficulty being that it had to comfortably fit two people with different body proportions. “There’s a fashion show at the beginning, so we had to make that dress for the model and then put it on Claire Foy,” Petrie explained. “So there was a thickening of a waist and a bust padding that we used for her.”

The queen’s triumphant moment in Ghana, in which she dances the fox-trot with the country’s president, is mirrored by her ballgown and insignia. Instead of trying to compete with Jackie for the title for the world’s most respected woman, she was just being Elizabeth. “It’s cleaner and simpler despite its grandiosity,” Petrie said. “It’s very much Elizabeth. Because she’s being more honest and more herself, unlike earlier when she’s trying too hard and was a little bit lost. Things are always better when you’re yourself. At this point in Ghana, when she’s confident again and she’s being herself, the dress is far more successful.”

Of all of the extravaganza dresses and tuxedos featured in The Crown’s second season, you might be surprised to learn that Margaret’s casual trouser and blouse look was the most difficult to visualize. “That was the hardest hard to do, because it was so unfamiliar to us,” Petrie said. “The aristocracy, they’re ‘horsey.’ They owned lots of animals and horses and went on hunts. It didn’t feel too far to push her with this. It’s actually Vanessa’s favorite costume for Margaret, because we had to work quite hard with that.” The main challenge was making sure the look was believable, and that Margaret would actually wear such an outfit to begin with. “Did we push it too far? Are we going to get away with it? We batted it around for a little while,” she continued. “Also, the headband — was it a step too far? Did it match the blouse? In the end, it felt like it was something Margaret would wear to be a bit more down and real.”

Watch the Real Historical Footage Behind The Crown Season Two