Can you spy which one is prose?

Each month, Abraham Riesman offers recommendations of comics, including book-length graphic novels, comics-format nonfiction, ongoing series, and — occasionally — prose books about comics. With any luck, at least one of them will be a match for you. 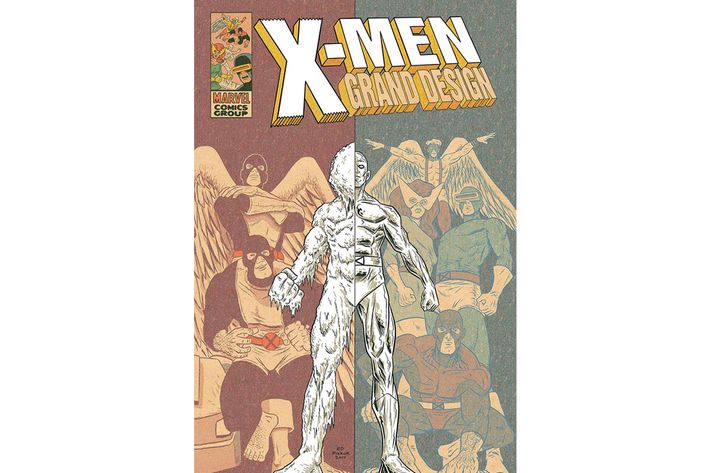 X-Men: Grand Design by Ed Piskor (Marvel)
Creators of highbrow indie work hardly ever permit themselves to do superhero work for a bevy of reasons (ownership, page rates, street cred, distaste, etc.), so when one does don a cape and cowl, readers should take note. Case in point: Ed Piskor’s X-Men: Grand Design. Best known for his acclaimed nonfiction musical chronicle Hip Hop Family Tree, Piskor is one of the most vital and exciting writer-artists in the industry today. Here, he employs the “holy shit, this happened; then, you’re not gonna believe it, this happened” narrative approach that he so skillfully deploys in HHFT, but uses it to tell the story of the X-Men. Well, his version of that story. Marvel has wisely given him a long leash to play around with continuity and character details, but Piskor manages to nevertheless remain true to the wild essences of the X-mythos. The layouts aren’t mind-blowers, but the compellingly lumpy figure drawing and vividly plastic facial expressions are a total joy and a welcome departure from the conventional visual approaches to the merry mutants. 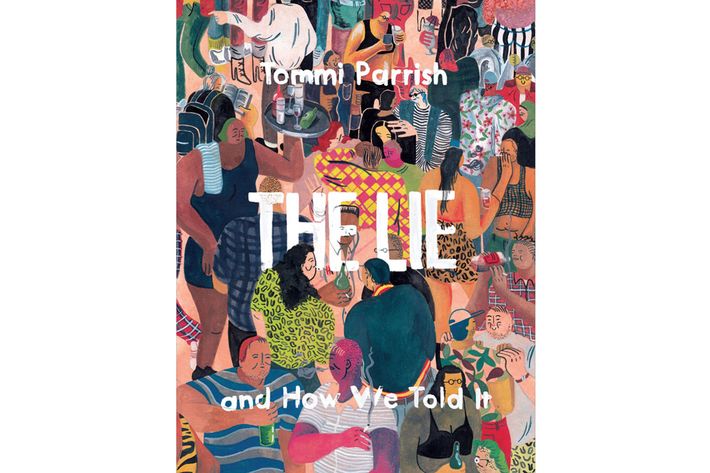 The Lie and How We Told It by Tommi Parrish (Fantagraphics)
“People change,” one character says to a newfound companion near the end of Tommi Parrish’s The Lie and How We Told It. The companion replies, “I mean … yeah, ideally.” This haunting little graphic novella never quite decides which speaker is right, and the tension between the two casual observations is where the magic lies. It’s a simple story: Two old friends run into one another and spend a few hours drinking and reminiscing; during two periods when they’re apart, one of them reads a book about an exotic dancer. Parrish’s tactile paintwork conjures humans with hulking bodies and baseball heads, all of them wondering whether the messes they’re in are the result of mistakes they’ve made or some kind of perverse destiny they were always bound for. 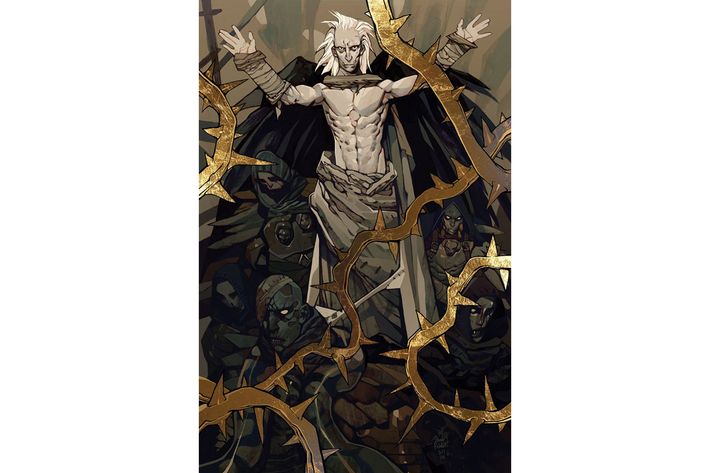 Judas by Jeff Loveness, Jakub Rebelka, and Colin Bell (BOOM!)
What a gorgeous comic. Judas does what it says on the tin: It’s a story of the Biblical betrayer in the aftermath of the death of Christ, told primarily through his internal monologue. As he wanders the Holy Land, he muses on his confusion about why Jesus said he was the savior, yet left the world in a state of continuing disrepair and injustice. Along the way, he encounters the weird creatures of the Bible, behemoths and heavenly hosts of inhuman composition and proportion. Jeff Loveness composes phrases like lines of a yearning, second-person poem, and the overall lack of action doesn’t hamper the urgency of his words. But the most exquisite part of the book is Jakub Rebelka’s rich, delicious artwork, with its muted colors and Klimt-like human figures. We’re only one issue in, but it’s an issue to roll around on your tongue and savor. 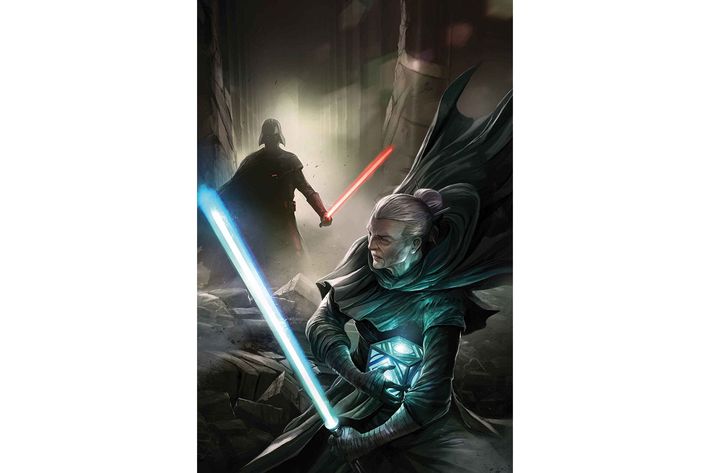 Darth Vader by Charles Soule, Giuseppe Camuncoli, Daniele Orlandini, David Curiel, and Joe Caramagna (Marvel)
It may have been a few weeks since Star Wars: The Last Jedi came out, but the scent of the franchise is still in the air. If you’re hungering for more content from a galaxy far, far away, look no further than Marvel’s second volume of Darth Vader. In it, we see the titular baddie in the immediate wake of Episode III, when the Empire is brand-new and few people within it have heard of our favorite Darth just yet. Charles Soule’s current story finds Vader commanding a group of dark ex-Jedi known as the Inquisitors on a mission to hunt down the Jedi librarian from Episode II, Jocasta Nu. That may sound dull, but Soule’s a clever writer and makes the story into a distinctly Star Wars twist on Isaac Asimov’s seminal Foundation novel series. The art can be a little crude at times, but it leaps and bounds across the grid with the momentum of an enraged Sith Lord. 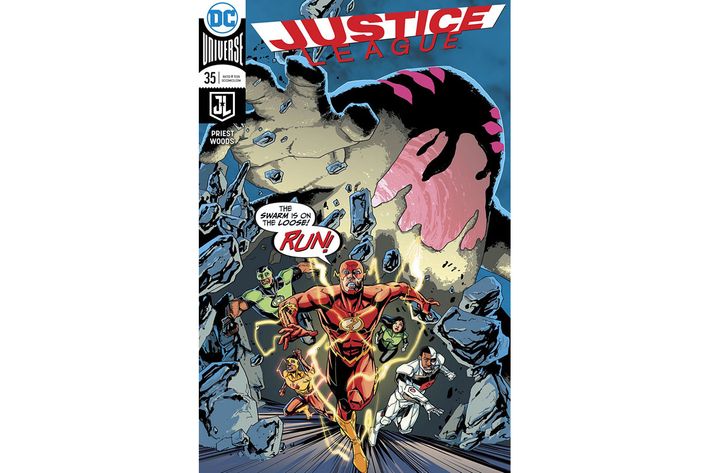 Justice League by Christopher Priest, Pete Woods, and Willie Schu (DC)
It’s still astounding that Christopher Priest is a guy whose work we get to read month in and month out. One of the great comics writers of his generation, Priest left the industry behind more than a decade ago and reportedly rejected offer after offer on the basis that he was sick of being pigeonholed as an African-American writer. His demand was that he be put on a superhero title starring a non-black character — and, ideally, starring Superman, Batman, or another top-tier Caucasian. He first got his wish with the fascinating Deathstroke, and now he’s fully in the big leagues with a run on Justice League. So far, it’s a damn sight more interesting than the film of the same name, depicting the JL dealing with the aftermath of a mission gone wrong that puts them in the bad graces of the masses. Pete Woods brings slightly cartoony excitement with his pencils, inks, and colors, and the mouth waters at the prospect of future installments. 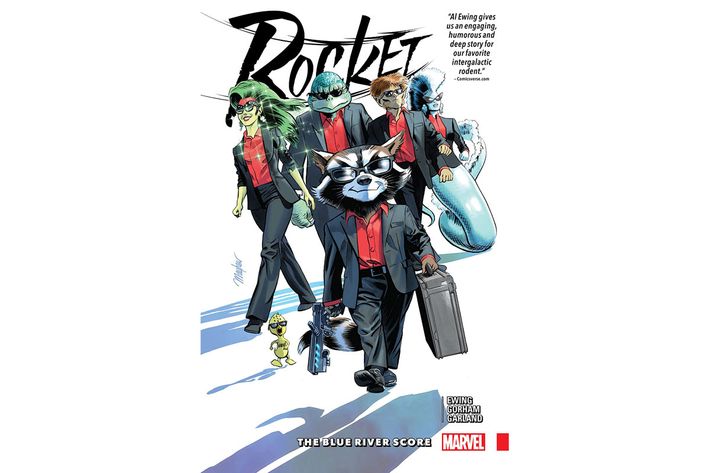 Rocket: The Blue River Score by Al Ewing, Adam Gorham, Michael Garland, and Jeff Eckleberry (Marvel)
After the surprise box-office success of 2014’s Guardians of the Galaxy, Marvel Comics tried to milk the property by releasing a ton of Guardians-related series. They’ve been wildly inconsistent in quality, but one indisputable win has been the Rocket Raccoon mini-series, The Blue River Score. Penned by one of the best scribes in mainstream comics, Al Ewing, it’s an old-fashioned bit of space noir in which Rocket gets pulled into a scheme by an otter-shaped old flame. Soon, he’s reunited with obscure Marvel sci-fi gang the Technet, the scheme turns out to not be what it seems, Deadpool shows up, and everything goes pear-shaped in a big way. Despite all that mishegoss, Ewing’s plot is taut and propulsive, and he stirs just the right amount of pathos in with the charming wackiness. Adam Gorham’s pencils are the exact right fit for the story, drafting up slapstick and sulking, delight and depression. Here’s hoping this team gets another crack at everyone’s favorite cosmic furball. 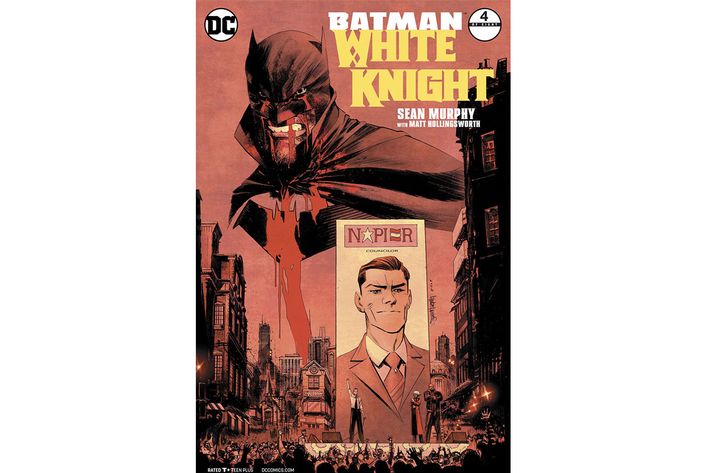 Batman: White Knight by Sean Murphy, Matt Hollingsworth, and Todd Klein (DC)
Out-of-continuity stories that ask “what if?” are commonplace in superhero comics for a reason. Major changes to the status quo are as rare in fictional universes as they are in ours, so there’s a perverse thrill to be had in seeing a world you know well being turned on its head. Batman: White Knight is part of that longstanding funnybook tradition, positing a world where the Joker breaks good and decides to launch a campaign against Batman. His war is largely one of words, with the erstwhile Clown Prince of Crime publicly arguing that the Dark Knight is an unaccountable abuser who has done nothing to lift up the downtrodden and has drained Gotham’s resources. The story has been peppered with nice twists (my favorite is the revelation that the louche Harley Quinn we’ve come to know in some recent Batman stories was actually a stand-in who had stolen the mantle from the slightly more wholesome one we met in Batman: The Animated Series) and Murphy’s slickly scratchy figures and action are always fun to gaze at. 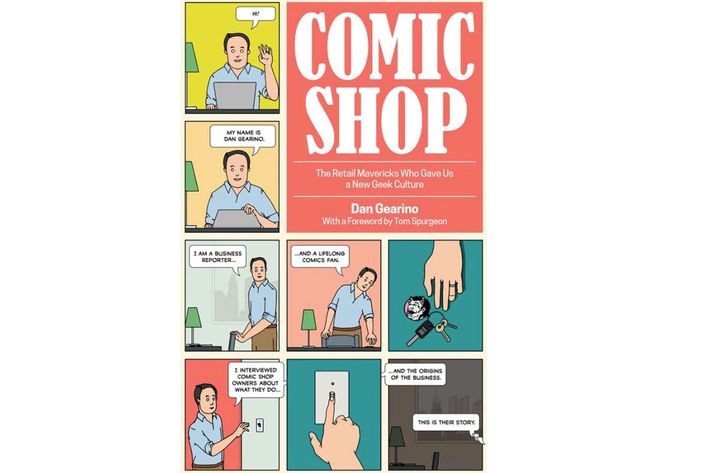 Comic Shop: The Retail Mavericks Who Gave Us a New Geek Culture by Dan Gearino (Swallow)
There are precious few prose books that have elucidated the quirkiness of the comics industry more than Comic Shop. In this slim non-comics-format tome, business journalist Dan Gearino turns his focus to the retailers that still make up the overwhelming majority of the market for sales of individual comics issues. Yes, you read that right: Digital has yet to even come close to overtaking brick-and-mortar stores — and, on top of that, they’re almost all mom-and-pop outlets, what with the lack of major chains in the industry. In clear and compelling language, Gearino lays out how comics specialty shops were born in the 1970s and ’80s, how they flew too close to the sun in the ’90s, and how they’ve managed to endure decades into the Information Age. The back has a nice and unexpected section where Gearino highlights specific stores of note, so if you want to support one of the last industries that’s built on independent small businesses, you’ll know where to go.

+Comments Leave a Comment
8 Great Comics to Read This January

best of 2022 3 mins ago
The Best Albums of 2022 The question of how to find peace hung heavily over the year’s most impactful records.
By Craig Jenkins
come collect 8:00 a.m.
A 2022 DVD Gift Guide for Movie Lovers Criterion 4K releases, Top Gun: Maverick, Yellowstone’s big box set, and more.
doing the work 1:36 a.m.
Lizzo Brings 17 Activists Onstage at the People’s Choice Awards Proving with her acceptance speech exactly why she was named People’s Champion.
oh dear Yesterday at 11:45 p.m.
Brendan Fraser’s Brain Sure Did Suffer During George of the Jungle He said he experienced temporary memory loss while on a strict diet for the film.
leaving the tent Yesterday at 9:05 p.m.
Matt Lucas Says He’s Too Busy to Keep Co-hosting The Great British Bake Off “I am cheerfully passing the baguette on to someone else,” he wrote.
awards season Yesterday at 7:33 p.m.
Abbott Elementary Leads TV Nominees for the 2023 Critics Choice Awards Better Call Saul, Gaslit, Reservation Dogs, and The Good Fight follow closely behind.
2equel2 Yesterday at 5:40 p.m.
The Oscars Are Sad There Won’t Be a Sequel to The Holiday Well, if that’s the case, they should’ve called it Last Holiday. Wait …
coming soon Yesterday at 5:14 p.m.
All the Rumours About Daisy Jones & the Six We thought this series was only in our “Dreams.”
explainers Yesterday at 4:35 p.m.
The Biggest Questions Ahead of the Tory Lanez–Megan Thee Stallion Trial Here’s what could happen at the high-profile trial, where Megan has accused Lanez of shooting her in the foot.
the law Yesterday at 3:10 p.m.
Bill Cosby Sued by 5 Women for Alleged Sexual Assault NBC Universal is also a defendant.
tributes Yesterday at 2:28 p.m.
Kirstie Alley Remembered by Cheers Cast and More Celebrities “I am so sad and so grateful for all the times she made me laugh,” Ted Danson said.
overnights Yesterday at 2:18 p.m.
Southern Hospitality Recap: One Fish, Two Fish, Drunk Fish, Who?? Fish I trust Bravo implicitly — meaning I’m trying my absolute damnedest not to question Southern Hospitality’s choices … yet.
don't stop him Yesterday at 2:18 p.m.
Bono Takes the ‘Highway to Hell’ in the Middle of the National Cathedral Look, the guy really loves AC/DC, okay?
into it Yesterday at 2:00 p.m.
‘Auntie Will Never Retire’ Sheryl Lee Ralph has big plans for her post-Emmys career, so long as the younger generations keep hiring her.
jazz improvisation Yesterday at 1:41 p.m.
Margot Robbie Saw an Opportunity to Kiss Brad Pitt and Took It She said while promoting Damien Chazelle’s new film, Babylon.
vulture recommends Yesterday at 1:28 p.m.
Catch Me If You Can Is a (Lonely) Christmas Movie It’s the most accurate representation of Christmas from the adult perspective.
vulture 10x10 Yesterday at 12:31 p.m.
The K-Horror Puzzle 12-Across, Three Letters: Chihuahua who could use some therapy.
late night Yesterday at 12:30 p.m.
The Daily Show Will Feature Celebrity Guest Hosts Until Fall 2023 The all-star line-up includes Leslie Jones, Al Franken, Chelsea Handler, Sarah Silverman, and Hasan Minhaj.
herbie fully loaded Yesterday at 12:17 p.m.
Fred Armisen Wants to Host the Oscars for Cars Bip bip.
vulture lists Yesterday at 12:00 p.m.
The Best Books of 2022 Yes, this list features more than one book set in a postapocalyptic world, but have you looked around lately?
More Stories