Spoilers for Unsane below.

Just like Rooney Mara before her, Claire Foy now has the distinction of being tapped to play Lisbeth Salander in a Girl-With-Something-Scary adaptation and starring in a lean Steven Soderbergh thriller that mines paranoia about a woman spinning out of control. But is the former queen of The Crown up to the challenge of playing a malcontent Swedish hacker punk? After seeing this weekend’s Unsane, we’re glad to report that Foy is indeed ready for her transition from opulent British period dramas to harder-edged material.

As Sawyer Valentini, Foy plays a woman on the run from a stalker, who ends up held against her will at a psychiatric care facility. We’re left to determine whether her harasser is in fact waiting to capture her — or whether she’s gone completely out of her mind. Through it all, Foy serves as a kind of collapsing star pulling everything toward her. Her deft navigation between anxiety, terror, doubt, and resolve transfer onto the audience and trap them in the dueling hells of her wrecked brain and the hospital she’s imprisoned in. Below, we unpack four key scenes from the movie that prove the former face of The Crown can carry the weight of a horror film on her shoulders. 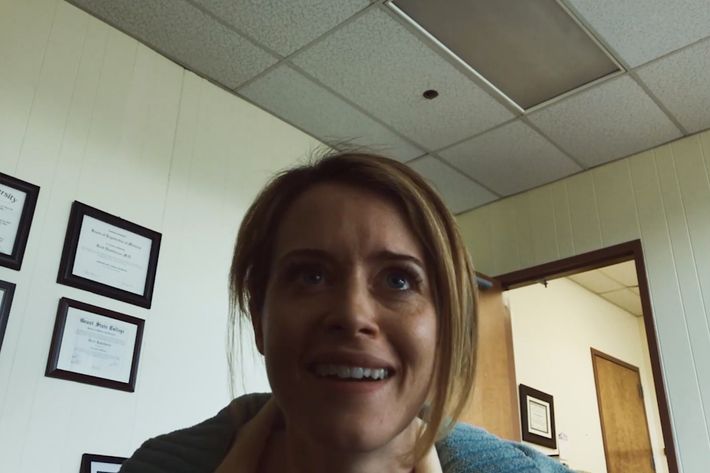 The best gift that Soderbergh gives Foy in Unsane are the close-ups. When Sawyer is feeling most trapped, the camera — i.e., Soderbergh holding an iPhone — sits within inches of her face and captures every frantic twitch. In order for the payoffs to carry any weight in a suspense movie, you have to be invested in the buildup, and watching Sawyer beg her doctor for solitary confinement so she can be kept away from the man she thinks is her stalker demonstrates just how fully the movie’s tension relies on Foy. You’re seeing the world entirely through her paranoid lens, so her every feeling dictates the tone onscreen. And if you can create an immersive emotional landscape with nothing but your face and an iPhone under your chin, you definitely have the range.

Sawyer Gets Her Meds 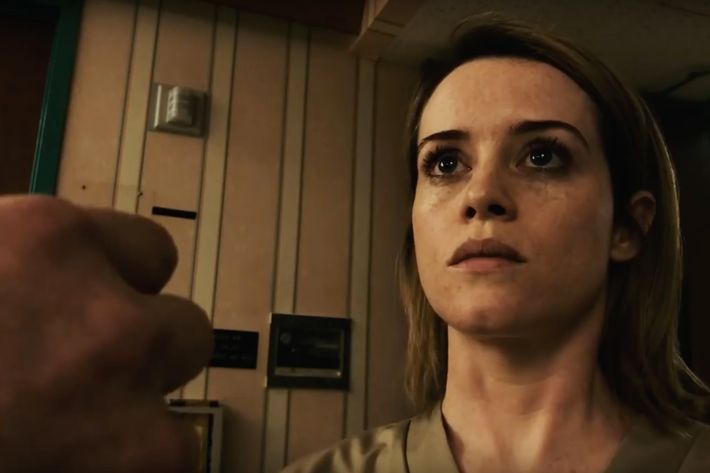 In Foy’s first face-to-face with the man she claims is her stalker, David (Joshua Leonard), he’s going by the name George and working as a hospital orderly administering medication to patients. Sawyer is sure it’s him, but she’s also not really sure of anything — maybe she’s out of her mind. For his part, George seems like a nice man, but he also seems like a guy pretending to be nice so he can gaslight Sawyer and con everyone around him. This scene is a minefield, and it’s the moment where Foy is either going to bring you onboard her emotional roller coaster — forcing you to question everything just like she does — or where you’ll write the movie off as a fun but thin romp wherein Claire Foy goes full Norma Desmond delusional. The latter is still a great option, but Foy succeeds in establishing the former, raising the movie’s paranoid stakes from curious to terrifying as you wonder whether or not her stalker is seriously feeding her sedatives — and the hospital that’s “taking care of her” is just letting him do it. Once again, her face-acting under jaundiced lighting conditions is something to behold.

Every Time She Punches Someone

One of the most satisfying things about watching Unsane is watching Claire Foy — pop-culture surrogate of the British sovereign — haul off and hit people. Multiple times. The novelty of seeing a petite data analyst unload on a hair-trigger is entertaining on its face, but the way it feels so instinctual is what makes it significant. Sawyer lives in state of normalized panic. She’s been suspicious for so long, she doesn’t remember how to feel okay, how to feel comfortable in the presence of strangers — least of all men. And when her flight instinct isn’t viable she clicks right into fight mode. Sawyer is not calmly violent. She’s like an agitated animal lashing out, which makes her reactions desperate and her motivations feel lived-in. Foy knows she is physically nonthreatening, and imbues Sawyer with the anxiety of a woman who’s learned the hard way that charm and manipulation have limits, and when you can’t talk your way out of a dangerous situation you must be prepared to physically protect yourself from harm. She’s hurting other people, but you can see the reactions are coming from her own pain. 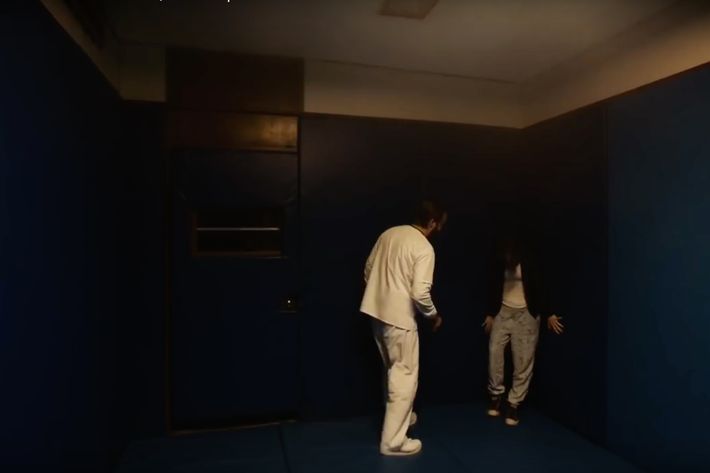 There are several key scenes that take place in the blue padded solitary-confinement cell where stalker David (she was right! he’s really there!) stashes Sawyer to finally get her all to himself. The final confrontation is the more obviously terrifying one, with murder and struggle and physical violence, but their first scene together — when all the horrible cards are laid on the table — is more interesting. Now that Sawyer knows she isn’t losing her mind and that her predator has actually infiltrated the facility where she’s being held prisoner, the emotional showdown begins. David insists they’re destined lovers, but instead of shrinking back, Sawyer exercises her pent-up rage by cutting him apart with withering, emasculating insults.

The considerably larger Leonard shrinks before Foy as she berates him, enumerating all the things he lacks and all the ways she is, in fact, an unapologetic bitch with no desire to wear the halo he’s projected over her head. Foy dares the viewer not to like Sawyer, even as you root for her triumph over her captor, and once she softens David up, she sets up both her last play for freedom (as well as her ascendance to the realm of Final Girl). Up until this scene, Sawyer is reacting to everything around her — but when she’s got nothing left to lose, she finally becomes proactive in her situation, and morphs into a tiny emotional terror.