“Our story is about a town, a small town, and the people who live in the town,” narrates Jughead in Riverdale’s opening lines. “I’m Breakfast at Tiffany’s,” Veronica tells Archie and Betty, “but this place is strictly In Cold Blood.” Yet as Betty and Jughead muckrake town secrets and Archie gains the confidence of Veronica’s mob family, the Riverdale we see week after week does not seem so tiny. How is it possible that the town isn’t big enough to support a single drive-in movie theater, yet Riverdale teenagers are a significant market for the party drug jingle jangle? When Sheriff Keller doesn’t call in reinforcements from the state police or the FBI to investigate the Black Hood’s killing spree, does that mean Riverdale is large enough to have its own homicide unit? The town’s mysteries go deeper than the buried secrets in Pickens Park, and so we decided to investigate a pressing question: Just how big is Riverdale?

Our first set of clues comes from the terrain of Riverdale itself, especially along the banks of the rolling Sweetwater River. Even if the downtown area is small, the town must encompass a wide landscape to have such a diverse river basin.

When Archie and Ms. Grundy find a calm spot on the banks for a picnic, they look across the water to the mountains.

Cheryl and Jason float down the river … until they hit the rapids.

And Betty and Jughead find a swamp deep enough to sink a car.

Further hints come from Riverdale’s famous maple syrup industry. Until recent technological advances, maple syrup production was a side hustle for many rural farmers. For the dynastic Blossom Maple Farms to have the capital of a modern corporate producer like Vermont’s Sweet Tree Holdings, the farm would need to tap 200,000 trees on 26,000 acres of land, or roughly 40 square miles of forest. For perspective, Albany is just shy of 22 square miles.

The size of the Blossom farm alone would suggest that Riverdale is a rural town surrounded by miles and miles of privately owned woods. Admittedly, at the time of Clifford Blossom’s death, the business was heavily subsidized by imported heroin from Montreal, but how else was he going to undercut the Federation of Quebec Maple Syrup Producers?

Archie’s frantic drive to the hospital after Fred’s shooting further emphasizes Riverdale’s middle-of-nowhere feel. The ambulance never comes to Pop’s Chock’lit Shoppe — is Archie too terrified to wait or is the emergency-services area too large? — and the hospital is nearly abandoned when Archie drags Fred through the doors.

Conclusion: Bigger than Albany with a river large enough for a ’90s thriller, yet too small for a fully staffed medical center.

Riverdale gives us contradictory hints about the town’s population size. Despite financial issues after Fred’s shooting, Pop’s is the only restaurant in town. (The Southside has the Whyte Worm, but its blatant gang affiliation limits its customer base.)

Pop’s is the go-to spot for hot dates, pre-wrestling egg-white omelettes, and private poker games with visiting crime bosses. A more bustling town would have more bars and restaurants, no? The residents of a luxury apartment like the Pembrooke would presumably demand a high-end eatery, at the very least.

Meanwhile, Fox Forest is home to an active gay cruising scene. As Vulture’s Jackson McHenry asks, “Is Riverdale’s population large enough to support a thriving backwoods sex scene? Do gay men from the local region drive over to Fox Forest to get their kicks?” These are essential questions, ones that go unanswered after Kevin Keller returns to swiping on GrindEm.

Riverdale’s school system also raises suspicions that the town is not so small. When Mayor McCoy closes Southside High, Principal Weatherbee explains that its students will be transferred to “other schools in the district,” including Riverdale High School. The school district is therefore large enough to need at least three high schools. This suggests that Riverdale is a larger city, perhaps along the lines of Clarkstown, New York (two public high schools, 87,000 residents).

Conclusion: Too small for anything but burgers and milkshakes, but somehow also big enough to be the regional hub for secluded woodland sex and to host a crosstown wrestling rivalry.

And now we reach the Greendale problem. Greendale is repeatedly mentioned as the next town over from Riverdale, yet it is far enough away that: (1) Jughead and Archie must travel for hours to get there, and (2) there is a sketchy rest stop along the way.

How far apart are these two towns? Far enough that Ms. Grundy can openly teach in Greendale after being run out of Riverdale for sleeping with a student, and far enough that Jughead believes Penny Peabody won’t return once he dumps her over the town line. Greendale’s town center must not only be a significant distance from Riverdale, but also large enough to have all the resources its residents need. Otherwise, wouldn’t Ms. Grundy risk running into Riverdale parents while shopping at the regional Mallmart? 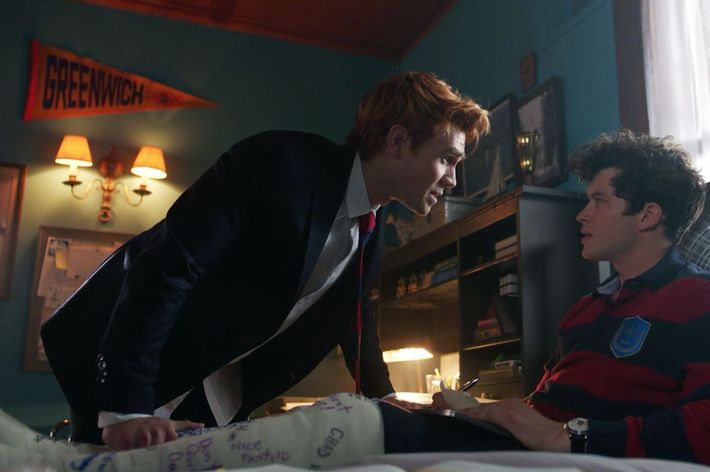 Also worth noting: Riverdale is close enough to New York City that Archie can bop down to Greenwich Prep, beat up Nick St. Clair, and get home in time to meet Veronica for cheese fries at Pop’s. So how rural can it really be?

Perhaps the most perplexing clue is the Lodge Industries SoDale project. The Southside development will create 40,000 square feet of retail space, entertainment venues, and modern luxury condos in a bid to spark aggressive gentrification and displace the Southside residents. Yet the town’s primary industries appear to be maple syrup production, construction, teaching, journalism, food service, government, and illegal activity (only one of which pays well), so who exactly will SoDale serve? Is Riverdale close enough to Manhattan to be a commuter city? Are they trying to attract Glamazon’s next headquarters?

Conclusion: Slightly more rural than Croton-on-Hudson, probably? Yet still enough of a midsize city to lure Brooklynites into condos.

With such wide-ranging conclusions, our analysis ultimately raises more questions than it answers. Does Riverdale’s devotion to Pop’s indicate a local quirk or a lack of options? Does Jughead think town lines are actually force fields? What’s the cost for a SoDale condo, and do they have hardwood floors? Like the true identity of the Riverdale Reaper, we may never know for sure.

What Temperature Is It in Riverdale?

+Comments Leave a Comment
How Big Is Riverdale, Exactly?

health updates 9:34 a.m.
Celine Dion Shares Rare Diagnosis, Postpones Tour The 54-year-old is living with stiff-person syndrome, which affects around one in a million people.
overnights 9:03 a.m.
Gossip Girl Recap: Exhibition at the Guggenheim Don’t spoon-feed us lessons on friendship. It’s Gossip Girl, so let’s focus on the gossip!
best of 2022 9:00 a.m.
The Best Video Games of 2022 In a year devoid of many major blockbusters, eccentric titles had their time to shine.
cancellations? 1:38 a.m.
Wait, Did Gal Gadot Jinx Wonder Woman 3? A day after she said that she was excited to share Wonder Woman’s “next chapter,” the movie is reportedly no longer moving forward.
trust me Yesterday at 11:51 p.m.
Black Adam Didn’t Do That Bad, Says Black Adam Star the Rock He said he confirmed with financiers that the movie will actually make a profit.
freaky friday Yesterday at 10:08 p.m.
Just Imagine the ‘All Too Well’ Short Film (Guillermo’s Version) Taylor Swift would like to swap places with Guillermo del Toro for a day.
overnights Yesterday at 9:07 p.m.
The Real Housewives of Salt Lake City Recap: Charcuterie Overboard People in glass houses shouldn’t throw shoes.
autopsy Yesterday at 8:13 p.m.
Anne Heche Wasn’t Drunk or High During Car Crash, Coroner Says Her official cause of death has been determined to be inhalation and thermal injuries.
let's go party Yesterday at 5:52 p.m.
Greta Gerwig’s Barbie World Keeps Getting Bigger Ken we talk about Ryan Gosling for a sec?
boston voice: wicked! Yesterday at 5:49 p.m.
Thank Goodness, the Wicked Movies Are on the Way What is this feeling? Oh, yeah, excitement.
alien superstar Yesterday at 4:52 p.m.
Avatar 2 Will Show Us the Way of the Weeknd His song for The Way of Water soundtrack drops December 15.
news from shondaland Yesterday at 3:29 p.m.
Grey’s Anatomy Scammer Elisabeth Finch Wants to Write on Handmaid’s Tale Next After admitting she “never had any form of cancer.”
buzz! buzz! Yesterday at 3:04 p.m.
It’s Almost Yellowjackets Season Citizen detectives, there’ll be a break in the case on March 24.
1.5x speed Yesterday at 2:17 p.m.
Bad Men, Weird L.A., and 8 More Podcasts Worth Checking Out Welcome to the Night Vale team’s latest world.
dolls kill Yesterday at 2:09 p.m.
Robot Renesmee Hits Some Choreo in M3gan Bolstered by her viral success, M3gan is coming for your necks, your wigs, and an innocent old woman.
gma3 goss: what you need to know Yesterday at 2:08 p.m.
Every Detail of T.J. Holmes and Amy Robach’s GMA3 Drama in Chronological Order There has been an embarrassment (and we do mean that word) of detail.
sundance 2023 Yesterday at 1:01 p.m.
Cat Person Has a Date at Sundance Film Festival 2023 As part of the lineup for the in-person and online programs.
real boys Yesterday at 1:00 p.m.
Pinocchios, Ranked What is it about this little wooden boy that’s resonated for 150 years?
my single is dropping Yesterday at 12:23 p.m.
Did You Know That There’s a Lana Del Rey Album Coming Next March? Did you know that there’s a tunnel under Ocean Blvd features Bleachers, Father John Misty, and her pastor.
vulture 10x10 Yesterday at 12:08 p.m.
The Memory Puzzle 9-Across, Nine Letters: Clarice Starling and Gracie Hart.
More Stories