The Cold War Is Over

The Americans stars Keri Russell and Matthew Rhys aren’t as sad about the end of their show as you might think. 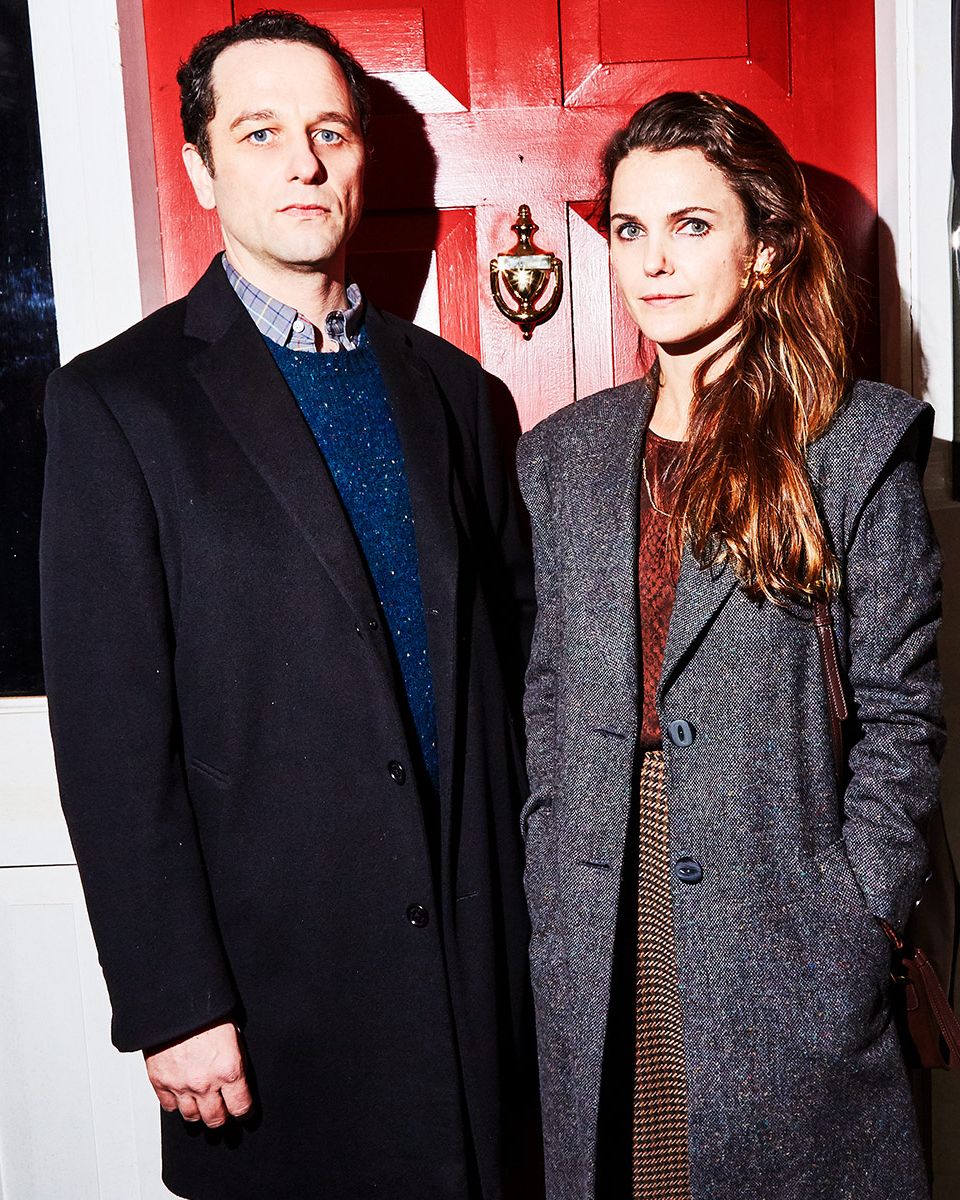 I don’t have that feeling anymore. Pulling things off.”

This exchange is giving Matthew Rhys and Keri Russell, who play married Russian spies working undercover in the Cold War–era D.C. suburbs on FX’s The Americans — which ends forever in May after six seasons — some trouble. The scene has them removing pieces of the disguises they’re wearing as they speak, which sounds easy enough on the page. (“They begin removing their disguises,” says the script for episode seven out of the final season’s ten.) But it requires Russell, as Elizabeth, to pluck out bobby pins and lift off a wig and Rhys, as Philip, to peel off a mustache and beard that need to stay intact for reuse later, while timing their movements and staying centered, sitting on a hotel bed in front of a mirror, so cameras can capture their reflections. Oh, and they have to look completely natural the whole time.

“This fucking scene,” Russell says, to no one in particular, in-between tries. But they shake off their frustrations and go again.

“I don’t have that feeling anymore,” Rhys begins. “Pulling things off.” He eases the beard and mustache away from his skin. He and Russell keep talking, sitting on the bed in the pretend hotel room where this conversation takes place. They reach the end of the scene … and have to do it another time. They still haven’t pulled off the part where Philip pulls off his beard while saying he doesn’t think he can pull things off.

“Sorry for trying to make a scene look real,” Rhys shouts out wryly to the crew after take four. “Ah,” he adds. “I’ll miss this.”

When The Americans debuted back in 2013, it looked to some critics like the latest spin on the anti-hero formula made popular by shows like Mad Men and Breaking Bad, this time with two anti-heroes, a mom and a dad, whose work-life balance problems involved juggling child care with jobs that occasionally asked them to stuff dismembered bodies into suitcases. Over the seasons, though, the series cemented its place in the pantheon of TV’s greatest shows ever. “I don’t think you can point to a prior spy show that it feels derived from,” says John Landgraf, the CEO of FX Networks.

On the Gowanus, Brooklyn, set of The Americans on this mid-January day, there are reminders everywhere that the series is coming to an end. The main level and upstairs of the Jenningses’ house is mostly intact, but all the furniture in the master bedroom has already been moved out. The soundstages themselves are marked for demolition after production wraps; the City of New York, claiming eminent domain, wants to knock them down in conjunction with plans to clean up the polluted Gowanus Canal. “Every day I walk to work and I get sad,” confesses Joe Weisberg, the show’s creator, who, alongside fellow showrunner Joel Fields, has acted as its creative overseer for the past six years.

Fields, too, gets misty these days, especially when discussing his leads. “Among the joys of this show has been that they have the ability to take whatever scene work we give them and elevate it to deeper and more surprising places,” he says of Russell and Rhys, each of whom has been nominated for two Emmys so far for their performances. “There were a series of moments, particularly in that first season, where we realized, Wow. We’re in great hands here.”

Weisberg agrees: “The chemistry was there from the beginning, and that’s why the show works.”

But Rhys and Russell, who became romantic partners in real life after working together on the show, are approaching the series finale in a manner reminiscent of the way that Elizabeth and, to a lesser extent, Philip have always handled their tradecraft: by pushing sentimentality to the side and focusing on the job at hand.

“We’re still so much in the thick of it,” Russell explains, sitting in a makeup chair a few feet away from Rhys, who’s also getting touched up before their next scene. No longer in disguise, they are now dressed in classic Elizabeth and Philip ensembles, a brown silk blouse with matching houndstooth-patterned pants in her case, a crewneck sweater paired with pleated gray dad slacks in his. “We’re just trying to get it done. You’re exhausted all the time. When people are like, ‘Are you going to be so sad when it’s over?,’ you’re like, ‘All I can concentrate on right now is the glass of wine that’s going to happen in about eight hours.’ ”

Maybe the reason they’re not as outwardly upset as their co-workers over the show coming to an end is that they’ll still get to see each other after cameras stop rolling. The couple first crossed paths nearly 20 years ago, at a kickball party hosted in L.A. by married actors Jennifer Grey and Clark Gregg. But the two didn’t work together or establish a relationship until more than a decade later, when they slid into their roles as Philip, Elizabeth, and the couple’s thousands of alter egos. (They officially announced their relationship in 2014.) After doing six seasons of television together, and also forming their own domestic partnership — Russell and Rhys have a son who turns 2 later this year — it’s easy to see how much energy they derive from being in each other’s presence, in character and out.

Between takes, they frequently make jokes to keep the atmosphere light. After an attempt at the “pulling it off” scene, Russell puts a button on the moment by looking at Rhys and whispering, “Let’s fuck.” At the end of another scene, in which Philip and Elizabeth decide to grab a bite to eat, Russell jumps up and down and shouts, “Hot dogs! Hot dogs!” after the director calls “Cut.”

Later, in their makeup trailer, they ask each other’s opinions when answering questions and occasionally riff on them. When I broach the subject of the final episode and note as an aside that I actually don’t yet want to know how The Americans ends, the two double-team me with threats of spoilers.

I ask Rhys if the two might ever work on something else in the future, and he quickly responds: “Another child.”

Okay, but how about acting-wise?

Rhys pauses a beat. “Another child,” he says again. “Maybe a remake of Hart to Hart?” He launches into a very accurate impression of Lionel Stander’s voice-over from the ’80s detective series — “It was moider” — then suggests another idea: “They ought to pitch to us that they want to do a version [called] The Canadians,” he says, “where we’re just too nice and we don’t kill anyone.”

*A version of this article appears in the March 19, 2018, issue of New York Magazine. Subscribe Now!

A Complete Guide to the TV Shows Ending in 2018

+Comments Leave a Comment
Keri Russell and Matthew Rhys on the End of The Americans
vulture sports 7:48 p.m.
Release the Gay Cut of 80 for Brady Gus Kenworthy says his smooch with Brian Jordan Alvarez was cut from the flick.
trailer mix 7:06 p.m.
‘Strays’ Trailer: Will Ferrell Is a Dog That Cusses A talking dog vows revenge on the jerk who abandoned him.
sequelitis 6:38 p.m.
Disney Working on Sequels to Frozen, Toy Story, and Zootopia Bob Iger’s plan to stop Disney from going broke? Sequels, baby.
grammys 2023 6:04 p.m.
Dee Barnes Thinks It’s a Choice to Name Grammy Award After Dr. Dre “They named this award after an abuser … you might as well call it the ‘Ike Turner Award.’”
everyone gets a turn 6:00 p.m.
The Daily Show Sets Its Second Slate of Guest Hosts Hasan Minhaj, Marlon Wayans, Kal Penn, Al Franken, and John Leguizamo take the show into April.
yawn solo 5:33 p.m.
Harrison Ford Isn’t Anxious. You’re Just Boring. In a searingly honest confessional, the 80-year-old actor came out … as not having social anxiety.
coming soon 4:40 p.m.
Owen Wilson Is (But Isn’t) Bob Ross in Paint If it looks like Bob Ross, walks like Bob Ross, and paints like Bob Ross, it’s Owen Wilson in the Paint trailer.
trailer mix 3:36 p.m.
Hungry Guys Will Be Treated to Some Movie Trailers at the Super Bowl No time for Totino’s when the Scream VI trailer is premiering
explainers 3:10 p.m.
What the Great Netflix Password Crackdown Means for You Let’s talk about it.
vulture lists 2:00 p.m.
15 Great Valentine’s Day TV Episodes You Can Stream Right Now Parks and Rec, New Girl, Friends, and more.
america has a problem 1:35 p.m.
The Beyhive Slashed Its Ivy Park Budget by 50 Percent New reports suggest people were saving for Beyoncé tickets instead of buying her streetwear.
you are getting sleepy 1:00 p.m.
Joe Pera, the Sleep King Talking to the comedian and his collaborator Ryan Dann about their new podcast, writing songs, and being slow.
improv 12:47 p.m.
Colin Mochrie Reflects on Over 30 Years of Whose Line Is It Anyway? “The short answer is, as of now, this is the last season with this cast.”
By Caitlin Wolper
vulture 10x10 12:12 p.m.
The Louboutin Puzzle 30-Across, Five Letters: Movie with Space Jockeys
hbo axe'd 12:05 p.m.
Looks Like Discovery+ Doesn’t Need HBO Max After All The combined service is still coming, but one streamer gets to stand apart.
ftw 11:35 a.m.
The Late Late Show to Be Replaced by Reboot of @midnight Stephen Colbert will executive-produce a reboot of the Comedy Central game show.
househusbands 11:24 a.m.
The Types of Men You Find on Real Housewives In the Bravo-verse, the men have their own special status.
what happened here 10:36 a.m.
A Breakdown of Armie Hammer Allegations, Controversies, and Time-share Drama Elizabeth Chambers says she learned about the allegations against her estranged husband as the public did.
buyer & bookseller 10:10 a.m.
Barbra Streisand Will (Yen)Tell Us About Her Life In My Name Is Barbra, her 1,040-page memoir.
exit interview 8:00 a.m.
Steven Soderbergh Can’t Quit Magic Mike He says there was “no compelling reason” to make a third movie, and then Channing Tatum’s live show happened.
By Matt Zoller Seitz
More Stories