One of the biggest names in modern Spanish horror cinema, director Paco Plaza (co-creator of the [REC] films), released his latest movie, Veronica, on Netflix this week with zero advance notice. Based on a true story, Veronica is a Ouija-board-based horror movie, following a 15-year-old girl named Veronica (excellent newcomer Sandra Escacena) who sneaks into the basement of her Catholic school while all the other students are on the roof watching a solar eclipse (cosmic! spooky!) so she and two friends can hold a séance. Veronica supplies the dreaded Ouija board — and becomes the accidental vessel of a malevolent spirit when their quick-and-dirty ritual goes better than expected. Thus kicks off an hour of various supernatural terrors torturing our heroine and her family, a trope that’ll feel familiar to connoisseurs of Ouija-based horror.

But maybe not too familiar: Veronica has been making mini-waves among horror fans for its supposed shocking, paralyzing, too-scary-to-be-believed plot. In fact, there’s a rumor going around that this is the scariest movie on Netflix. (In our estimation, Veronica is not that scary. It’s a worthy effort, but as far as witch-board movies go, you’ll get more out of Ouija 2: Origin of Evil.) That said, Veronica does have some great set-piece scares, and the movie’s most disturbing moment is pretty damn good.

When Vero and her classmates start losing control of their basement séance, she quickly becomes the demon’s unwilling vessel. For whatever reason, it has chosen Veronica, and when the lights stop flashing and everything goes dark, the two other girls use flashlights to search for her in the black. They find her on the floor. Unresponsive and murmuring something indecipherable, Veronica snaps back to consciousness with a deep-throated, monstrous wail. Her face is the only thing spotlighted by the flashlights, and even though you know it’s coming — even though you’ve seen the image on the damn poster! — the satanic shriek will throw you back in your chair. 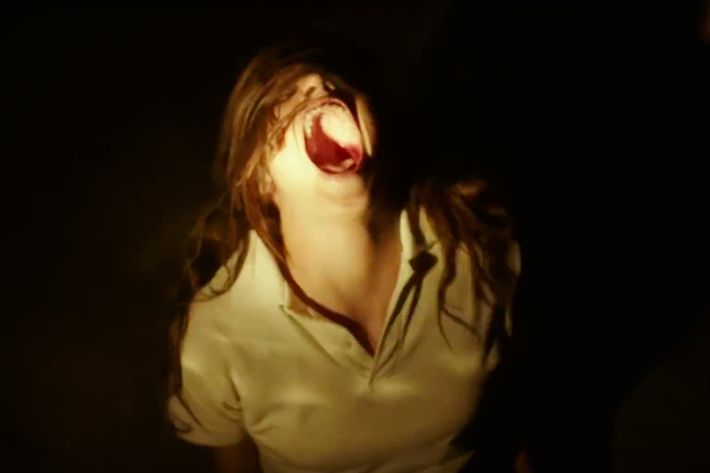 When combined, the contorting and screaming are jarring enough, but what makes this scene so scary is a little trick that’s often deployed in jump-scare horror films — and it’s executed expertly in Veronica. Vero’s mouth isn’t just opened wide as she screams. It’s been widened just enough to turn it into an unnatural, gaping maw (made even more dramatic by the metal braces running the length of her teeth). Even though the tight shot on Veronica’s screaming face moves quickly, the distinct stretch of her lips — like that Twitter macro of Meryl Streep shouting at the Screen Actors Guild Awards — is enough to tip your brain off that things have gone seriously wrong, and these characters are headed to the hurt locker fast. You’ll recognize the effect from movies like Origin of Evil, where it was a little too touched: 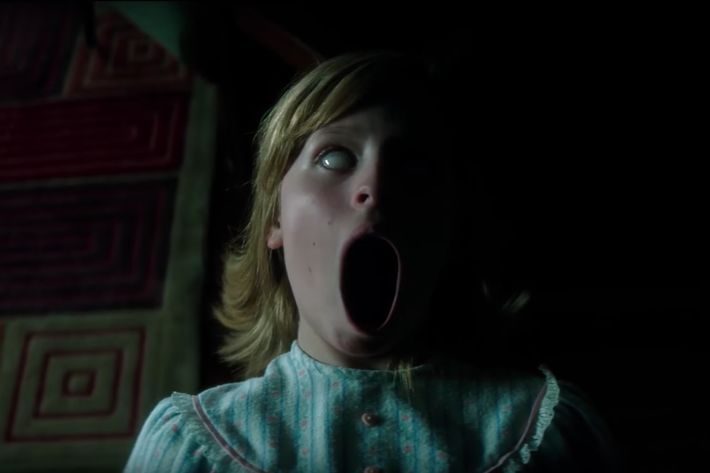 And in The Grudge, the American adaptation of the classic Japanese horror film, Ju-on. (Toshio’s greatest weapon of terror is the circular black void he so often opens up in the middle of his face, and his cat scream is in the fear-inducing hall of fame.) 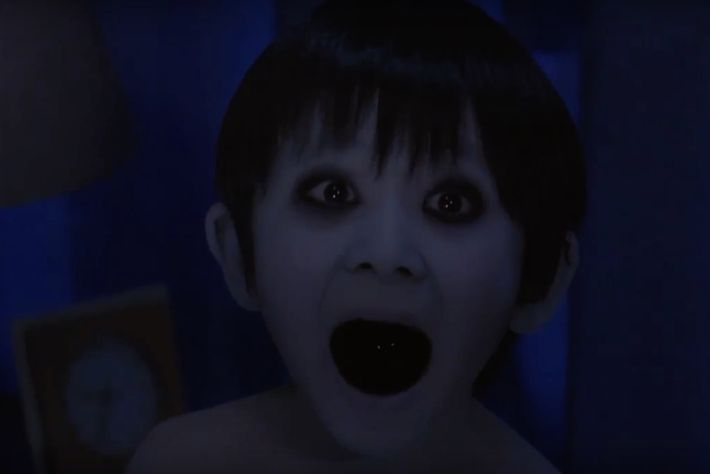 Obviously, the effect has a bigger impact when it’s used on kids, because if adults shouldn’t be able to reticulate their jaws far enough to swallow human arms — or human heads — then kids definitely shouldn’t be able to. The mouth stretch is so terror-signaling, it’s even used to make monsters that are already scary … even more scary! Just consider The Taking of Deborah Logan.

Or the moment when the Predator takes it to 11 in Predator.

Or when Pennywise grows a mouth to match his forehead in It.

The mouth stretch works so consistently because it escalates the terror twinge from simple shock to the threat of something unnatural. When a mousy teen girl’s mouth expands enough to accommodate a large man’s fist, you know that whatever darkness has arrived is beyond the powers of responsible adults or law enforcement to fix. And when done well, like it is in Veronica, the effect is just close enough to real that your brain accepts it as possible, and you wonder, “Jesus, what would I even do if I actually saw that happening?!”

So, should you find yourself in a dank basement with a Ouija board and your friend starts convulsing, alert medical professionals immediately. But if that friend’s jaw drops four inches and their mouth opens wide enough to fit a baby’s head, then get your ass directly to a priest.