Nothing makes an episode of Billions pop like a scheme: the high-wire tension of the initial Ice Juice play, followed by its equally thrilling unravelling, or watching Axe squeeze a short until someone’s eyes pop out. After a (very good) week of catching up on what our buddies did over summer vacation, it’s extremely welcome to be right back in the swing of things, racing around at a hundred miles an hour.

Billions is especially good at showing the queasier side of what Chuck and his cronies do to make their cases: I’m thinking of the farmer with the sick kid who they needed in order to nail Dollar Bill, the flight attendant they tried to scam for dirt on Boyd, and so on. This week, they’re holding legal residency status above the head of housekeeper Maria Gonzalez. It’s harder to see who gets ground underfoot by Axe; most of the people he brings low or humiliates are fellow billionaires and ex-employees who’ve dared to go solo. So I appreciate that the situation Maria finds herself in is solidly on Axe’s side of the ledger: Finally, someone we can actually feel sorry for is getting screwed over by the money men. Obviously, the show knows we can do the math on Wow, if Axe has all this money, probably some of it is taken from people who need it more, but it’s easy enough to forget when we’re watching him puncture a stuffed-shirt at a charity poker tournament. He’s actually willing to deport an innocent woman!

Axe is terrible at sitting still and not getting himself in the middle of trouble, and, as anyone could have told him, is already FILLED with regret about signing away his right to trade. Watching him page through his Rolodex of people who might be willing to hide trades for him in their own position moves is watching a drowning man scrabbling for a life preserver. He has 2 billion dollars; he simply can’t help himself. Taylor, of course, wants that money for their own purposes, and Wags is trying to secure it for them. Wags is WELL aware that Axe will cheerfully risk blowing up his life in exchange for the thrill of being back in the game.

For those of us who miss Hall every day (come back, Hall!), the arrival of Axe’s two new fixers (lean, mean, young, and humorless) is a welcome distraction. They are more than willing to chest up to Wags’s attempts to tease them — hearing a mercenary pronounce smashed spring-pea toast as the new avocado toast was my personal highlight of the week — but I want to see that phenomenal dead-behind-the-eyes menace that Hall specialized in before I can switch my loyalties.

Meanwhile, a marvelously fun indulgence for the show’s creators right now is blocking scenes between Spyros and Taylor. Spyros is such a heel, never in the know, desperate to seem world-weary and knowledgeable, and Taylor never needs more than three seconds to establish that Spyros has literally no idea what he’s doing. Watching him scuttle his long legs to keep up with Taylor sweeping purposefully from room to room is a DELIGHT. An absolute delight.

Speaking of delights, Wendy Rhoades, who was a bit on the sidelines last week, gets a fantastic scene with Chuck that reminds us why her value as a mindset coach is not something that only serves her employer: Wendy works Chuck over with flair and sends him off to collect an old and very hard favor, in order to ensure a friendlier judge in the Ice Juice case than the legendarily business-minded Leonard Funt, who is currently set to hear their arguments.

(Let me pause to say that Orrin Bach CACKLING at Dake and Connerty while sniping “YOU GOT FUNTED!” at the news they’d been assigned the aforementioned Leonard Funt is the comic high note of the episode.)

The big money move of the week, it turns out, is the tsunami headed for Brazil, which will blow out a large number of Axe Capital’s positions. Taylor, being Classic Taylor, wants to briskly slash and burn a large number of utilities and government bonds to help offset the losses. Please enjoy the reaction shot after Ben Kim says, “Are we … are we at all worried, you know, about the people … in Brazil? 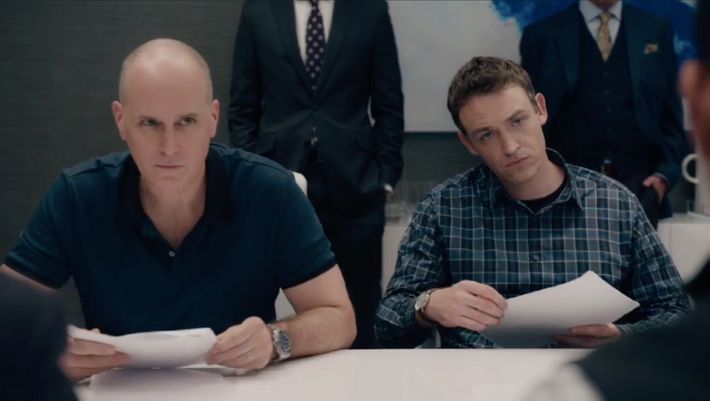 The head of the Axelrod charitable foundation, a glorious louse, pipes up to mention that offsetting these … guilty feelings … is exactly what the foundation is designed for. I love this guy! He’s so awful. It’s Taylor, however, who shuts down the show, when someone whines about making a deal with a firm with an indicted leader: “Legal trouble does not mean you cannot fulfill your teleological purpose.”

Taylor!!!! Taylor knows what’s up. Axe is on the verge of keeping or releasing the 2 billion into Taylor’s hands, and taking a massive loss on the Brazilian situation is not acceptable to them. They get the job done.

Also: In an episode with a lot of fantastic comic relief, the enjoyability of Spyros’s neediness and compliance livestreaming is boosted by watching Connerty and his FBI counterpart try to grab the fraying ends of the Ice Juice conspiracy rope, only to be greeted by a very nude AND wet former analyst with no intentions of flipping on Axe. Sorry, Connerty!

This season? It’s popping. I’m feeling it. When Axe realizes that he’s *Taylor’s hedge* in the final scene, and kind of likes it? Things are getting VERY interesting.