Where does one even begin when recommending the various comics inspirations for the surefire mega-blockbuster Avengers: Infinity War? The thing contains damn near every Marvel hero that Disney has access to, all of them with their own extensive printed backgrounds. That said, they’ve all been covered when their previous movies came out, so let’s leave them aside for a moment and talk about the baddie, hmm? The mass-murderous Thanos is the beefy antagonist in the picture. Though he’s made cameos in The Avengers, Guardians of the Galaxy, and Avengers: Age of Ultron, this turn from Josh Brolin is the character’s big coming-out party. But how did this jolly Indigo giant rise to the Marvel Cinematic Universe? These comics will sing the ballad of the Mad Titan. 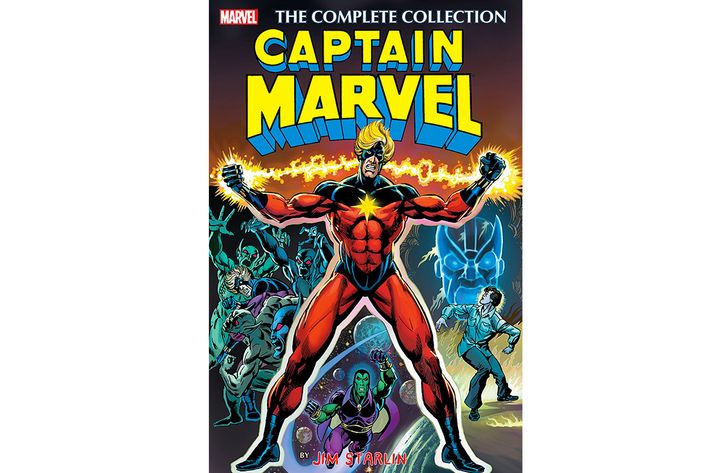 Captain Marvel by Jim Starlin: The Complete Collection by Jim Starlin and Others
You can’t understand Thanos if you don’t understand Jim Starlin. The Detroit-born writer-artist concocted the character after misremembering the name of Freud’s word for humanity’s death-drive, “thanatos.” Starlin had only been working with Marvel Comics for a few months when he was asked to fill in as the penciler on Iron Man. It was one of the most fateful fill-ins in comics lore: In that stand-alone story, the 20-something creator introduced the hulking, imperious Thanos as the villain of the month, and his own corner of history was made. This volume gives you not only that first story, but also Starlin’s legendary run on Captain Marvel (Brie Larson fans: Don’t be surprised that CapMarv used to be a man), which heavily featured the ridge-chinned gent he was beginning to fall in love with. 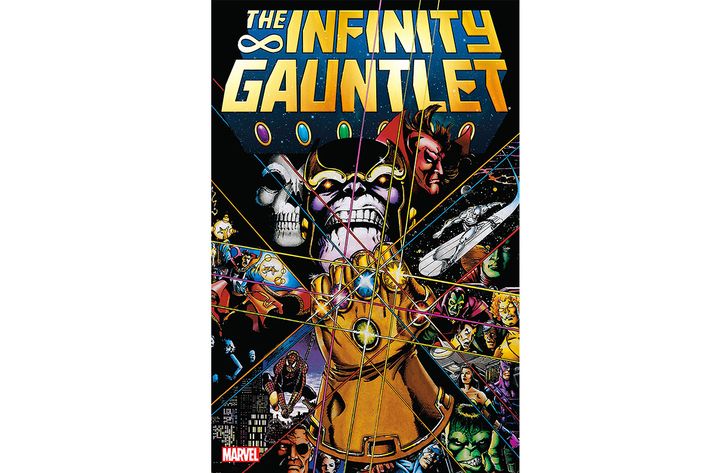 The Infinity Gauntlet by Jim Starlin, George Pérez, Ron Lim, and Others
Flash-forward to 1991 and, after a few departures and returns, Starlin’s back at Marvel. It’s been nearly 20 years since he introduced Thanos, but he manages to crank out a story that feels both fresh and utterly true to the character. Indeed, this might be the high point of Starlin’s entire Thanos story cycle. The Infinity Gauntlet is likely to be the most direct comics influence on Infinity War (not to be confused with the Infinity Gauntlet sequel, The Infinity War), in that it focuses on Thanos assembling the titular gauntlet, a gem-studded glove that lets him manipulate all aspects of reality. The fight that ensues is a knock-down, drag-out for the ages, featuring one of the all-time great Captain America moments. The thrilling scope of Starlin’s words is only matched by the imagery from pencilers George Pérez and Ron Lim. The first issue is just called “God,” if you want a sense of what you’re dealing with. 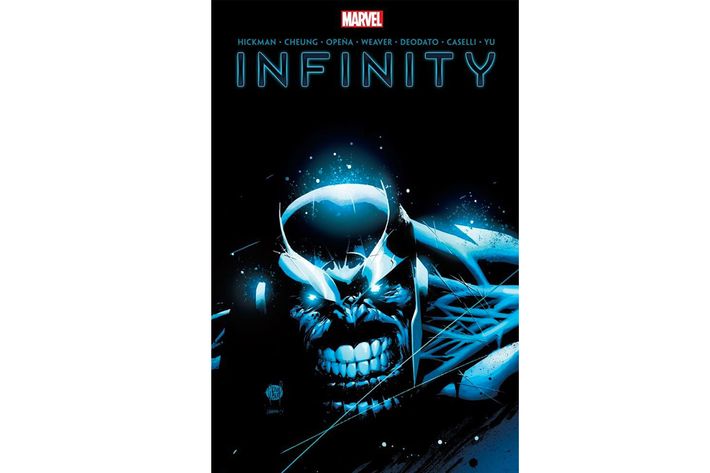 Infinity by Jonathan Hickman, Jerome Opeña, Dustin Weaver, and Others
The other contender for the biggest-influence award is the mononymous 2013 event Infinity. Though Thanos had been around for more than 40 years at that point, he was still at the forefront of the Marvel rogues gallery, acting as the primary antagonist in this space opera from writer Jonathan Hickman and artists Jim Cheung, Dustin Weaver, and Jerome Opeña. It follows yet another titanic tussle between the heroic types of the Marvel universe and the resolute Mad Titan. To be frank, the story is a little baffling, but if you treat it like a warm bath and just let all the craziness wash over you, it’s a thrill and a hoot. And the influence reveals itself in the form of the Black Order, Thanos’s lineup of vicious henchpeople, who first appeared here and have gone on to make the leap to film in the form of Infinity War. If names like Corvus Glaive, Proxima Midnight, and Ebony Maw can’t pique your interest, I’m sorry that you’re dead inside. 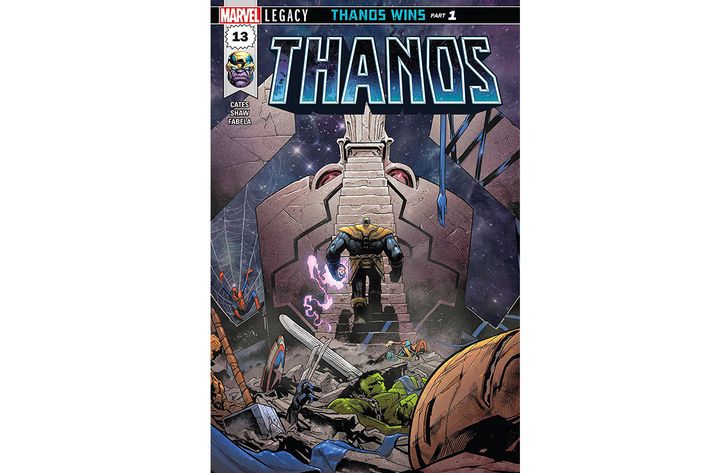 “Thanos Wins”: Thanos Nos. 13–18, by Donny Cates, Geoff Shaw, and Others
Despite his centrality to the Marvel cosmology, Thanos has had relatively few comics issues dedicated solely to him. Indeed, the latest effort at a self-titled Thanos solo series just ended in cancellation. But that effort, in its final stages, really made a mark. Writer Donny Cates and artists Geoff Shaw and Antonio Fabela generated a fantastic six-chapter mini-saga about Mr. Chinny lurching through time to meet his future self, and it’s nearly certain that it’ll go down as one of the greatest Thanos stories of all time. Shaw and Fabela conjure up a heady mixture of post-apocalyptic mayhem and black-light-poster cosmology, and Cates’s ear for Thanosian dialogue is admirable. One might be tempted to say this story would do Jim Starlin proud, except for the fact that he was actually very dissatisfied with the fact that Cates’s story contains striking similarities to one he was crafting in … 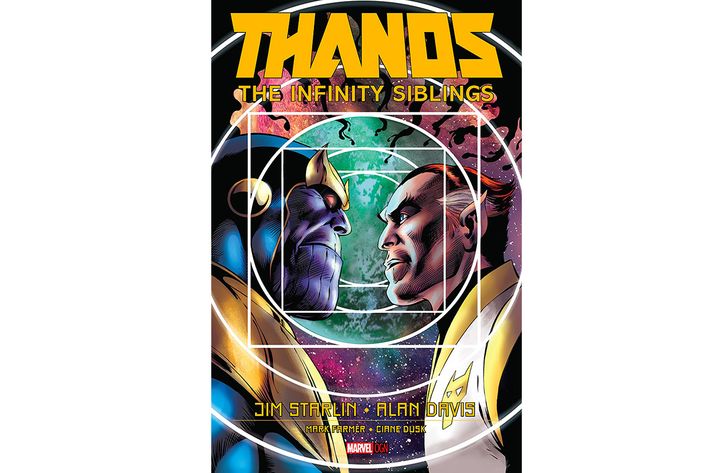 Thanos: The Infinity Siblings by Jim Starlin, Alan Davis, and Others
… the latest Starlin/Thanos joint, The Infinity Siblings. A couple of years after Thanos’s screen premiere, Starlin got to revisit his beloved baddie in the form of a graphic novel, set in its own continuity, called Thanos: The Infinity Revelation. It allowed Starlin to pick up more or less where he left off with the character he’d last penned in 2004, and has been followed by 2015’s The Infinity Relativity and this month’s The Infinity Siblings. The latter is actually the beginning of a trilogy, the remaining two installments of which will, barring a stunning reversal in trend, have “Infinity” in their titles. Starlin’s aria-like dialogue and relentless commitment to earnest sci-fi make him a little out of fashion, but The Infinity Siblings is a solid, entertaining story that portends interesting things to come. If nothing else, come for the dependably wonderful pencils from the great Alan Davis. Alas, editorial problems over this new trilogy have driven Starlin to once again quit Marvel, but the remaining volumes will hopefully provide a satisfying coda for one of the best creator/creation relationships in comics history.

bbmas 2022 12 mins ago
The Highs, Lows, and Whoas of the 2022 Billboard Music Awards Whoa: A fever dream of an opening.
since when Yesterday at 10:40 p.m.
Machine Gun Kelly Dedicates 2022 BBMA’s Performance to Wife and Unborn Child And on a Blood Moon, no less.
overnights Yesterday at 10:33 p.m.
Barry Recap: Justice Is Still Attainable If Barry does want to genuinely atone for what he’s done, what does that look like?
overnights Yesterday at 9:00 p.m.
The Real Housewives of Atlanta Recap: Let the Games Begin Playing games with the RHOA cast more often than not ends in orchestrated chaos.
overnights Yesterday at 8:57 p.m.
Gaslit Recap: Hot Tub Backroom-Deal Machine It’s pretty clear that Dean does not like himself right now. Nor should he!
another one Yesterday at 8:52 p.m.
Kourtney Kardashian and Travis Barker (Maybe) Got Married (Again) Maybe this time, we’ll be lucky.
timey wimey Yesterday at 7:20 p.m.
Oi Spaceman! David Tennant and Catherine Tate Are Coming Back to Doctor Who Are we bothered?
snl Yesterday at 7:02 p.m.
SNL Thinks Your Long-Term Boyfriend Is Old Enough to Run Errands All on his own!
2022 bbmas Yesterday at 6:52 p.m.
Here Are the Winners of the 2022 Billboard Music Awards A big night for Ye’s Christian/gospel rep.
snl Yesterday at 5:52 p.m.
Steve Martin Explains the History of the Whoopee Cushion on SNL Along with Selena Gomez!
overnights Yesterday at 3:06 p.m.
Saturday Night Live Recap: Selena Gomez Is Looking for Love Selena Gomez makes her SNL hosting debut in an episode that has more misses than hits.
overnights Yesterday at 2:00 p.m.
Conversations With Friends Recap: Kiss and Tell Bobbi is too self-absorbed to realize Frances has a crush of her own.
overnights Yesterday at 12:00 p.m.
Conversations With Friends Series-Premiere Recap: Just Being Polite We’re back to the Sally Rooney Cinematic Universe, this time investigating the inner lives of four friends/lovers.
yikes Yesterday at 9:00 a.m.
A Warning From the Future About The Time Traveler’s Wife A time-traveling TV critic considers Steven Moffat’s strangely chintzy, tonally odd adaptation of the 2003 novel.
theater review May 14, 2022
A Cherry Orchard That Chops Down Most of the Trees Chucking out the familiar in search of the truth.
celebrity May 14, 2022
Britney Spears Reveals She Lost Her ‘Miracle Baby’ “This is a devastating time for any parent.”
go nuts for donuts May 14, 2022
WATCH: Kendrick Lamar Floats on in ‘N95’ Music Video A follow-up to “The Heart Part Five.”
walk off May 14, 2022
Jesse Williams Is ‘Not Really Worrying’ About Leaked Take Me Out Video The Broadway show is upping security after nude footage of Jesse Williams went viral.
a doctor in the house May 14, 2022
Doctor From TV Surprises Girl From the North Country With Special Performances Anthony Edwards made his Broadway debut as Dr. Walker.
rip May 14, 2022
Fred Ward, The Right Stuff and Tremors Actor, Dead at 79 “When it came to battling underground worms, I couldn’t have asked for a better partner,” wrote Kevin Bacon.
More Stories