In The Boys in the Band, Zachary Quinto leads an all-star cast of openly gay actors back to the days when being out was career suicide. 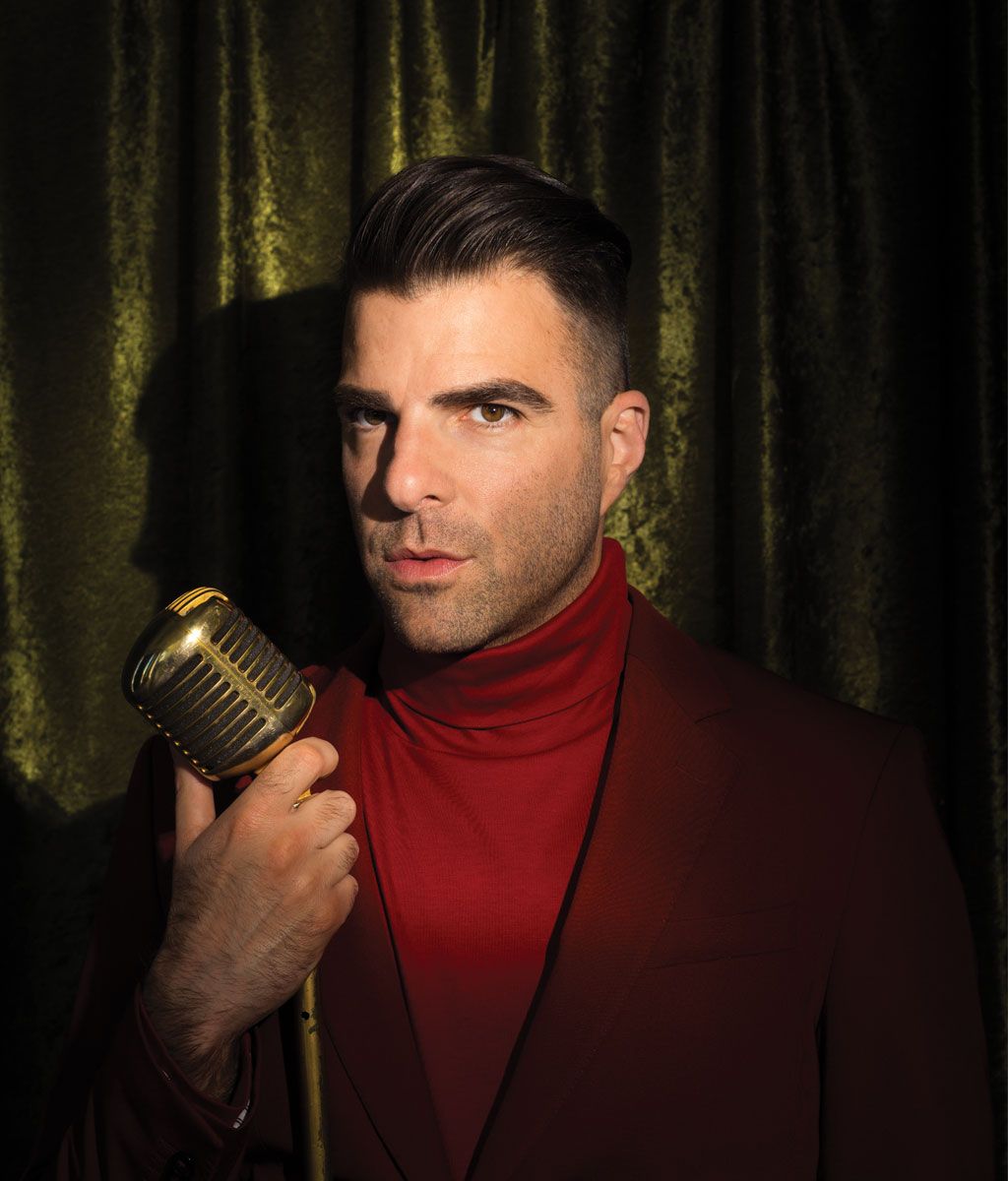 Styling by Savannah Baker; grooming by Patricia Morales. jacket from The Black Tux.

On a bright, cold Saturday morning in a squat, unmarked building in Brooklyn, the actor Zachary Quinto is sitting at a card table while a man from Kansas City explains that he was, 14 years ago, drugged and subsequently implanted with a series of microwave chips by a (former) friend who wanted to zap him into giving up the rights to a hygienic soda-can cover that both men were convinced would, eventually, make them millions of dollars.

It’s a very confusing conversation, but Quinto is steady. The interview is being filmed for In Search Of, a History Channel show of which Quinto is both the executive producer and the host. (This particular episode is about mind control.) “Are they still following you?” Quinto asks. His heavy, famous brow is furrowed. Quinto definitely has sci-fi chops — he was personally approved by Leonard Nimoy to revive the role of Spock in the J. J. Abrams remakes. He played a serial killer with superpowers on Heroes and had roles on two seasons of American Horror Story. He’s exactly the person a midwestern contractor who believes he’s been the victim of brain tampering would trust to take him seriously.

“They are following me,” says the man. “I saw them on my flight.” Quinto leans forward. He nods. “I believe you.”

In Search Of is a reboot of a show of the same name that ran from 1977 to 1982, hosted by Nimoy. Nimoy’s version was about phenomena that seem a little quaint now: yetis, the Bermuda Triangle, aliens. Quinto’s show expands to explore the interference of technology in a format he describes as “less turtlenecks and blazers, more Anthony Bourdain.”

It’s been a heady few months of production, but variety has always been what’s really set Quinto apart. So a few weeks after we meet, the minute he wrapped In Search Of, he flew to Los Angeles to begin rehearsals for a revival of a cultural relic of a different sort: The Boys in the Band, the 1968 Off Broadway play by Mart Crowley that is widely considered the first mainstream American play to deal openly with male homosexuality. The characters meet in an Upper East Side apartment to celebrate a birthday. They are drunk, they are funny, they are mean. The overwhelming sense is that they are hidden. The damage that this double life causes is palpable, painful, sad.

The revival is stuffed with blockbuster names — all of whom, in a conscious move by the producers, are gay. It’s produced by Ryan Murphy, directed by Joe Mantello, and Quinto’s co-stars include Jim Parsons, Andrew Rannells, and Matt Bomer. But even with all the attention that such a high-wattage project will bring, Quinto took some convincing to come aboard.

“Historically, the play has been really stigmatized,” he says. It’s after the In Search Of shoot, and Quinto’s eating a salad at the Library bar at the Public Theater, near the apartment he shares with his boyfriend, the actor and artist Miles McMillan. “When it appeared in 1968, it was revolutionary. No one had seen anything like it,” he says. “Then the movie came out in 1970, and in that period of time, Stonewall had happened, and this play became backward-looking, reductive, and stereotypical. It was a thing for the gay-rights liberation movement to say, This is exactly what we are not anymore. We are not these men who have to sneak around and make up stories.”

Quinto, in fact, had always thought of the play that way himself. Since coming out in a 2011 New York interview, he’s been careful to pursue a varied career — he’s the action and science-fiction star with the healthy New York stage credentials. He co-founded a production company, as his friend Sarah Paulson (who once had to breastfeed him on American Horror Story) puts it, “before I even got a computer.” She points out that he was having big commercial-film success when he committed to doing The Glass Menagerie, which ultimately came to Broadway but began its run in Boston. “I can guarantee you his agents weren’t jumping for joy,” Paulson says, “but it ended up being wonderful, and I remember noting for myself that these things could exist simultaneously. You can have commercial success and take the power of that and use it to feed yourself artistically.”

“He’s one of the most versatile actors out there,” says J. J. Abrams.
“He’s limitlessly capable.”

As for The Boys in the Band, which begins previews at Broadway’s Booth Theatre on April 30, “I’ve worked really hard to carve out a career that is separate from my identity as a gay man,” Quinto says. “And there was a part of me that was just like, I want to go in a different direction.” A July workshop convinced him that Boys would. “I think what this production does is go in the face of how far we’ve come,” he says, “and holds a mirror up to the audience and asks them to evaluate how far we still have to go. It’s incredibly relevant that a cast of accomplished, successful, authentic gay men are standing up and giving this seminal work a Broadway production. We’ve all been able to build diverse and satisfying careers for ourselves. The original cast of the play really struggled.” Even just having played gay men, they had limited opportunities as a result of being in the play.

The question of whether Quinto’s coming out on the eve of his breakthrough role changed the guardrails of his career is not hugely interesting to him. “Look,” he says, cocking an eyebrow, “I don’t think I would have been James Bond anyway.” (He says it as a joke, but it doesn’t seem the hugest stretch.) “There are people who feel that preserving that aspect of their identity will generate better opportunities,” he says. “I wasn’t capable of any kind of lie about my authentic self.”

When The Boys in the Band finishes its 15-week run, Quinto’s not sure what’s next. He’s thinking of shifting his base of operations back to L.A., where he can focus on his production company. And while it seems like there are already many Zach Quintos out there — the deadpanning, sci-fi Quinto, the heartbreaking-and-honest stage Quinto, the curious-businessman Quinto — there’s still more. He wants to do episodic television, he wants to do comedy (“I mean, I’m hilarious,” he says), he wants to continue wrestling with the obscure.
“What did you think of that guy?” he asks later in the afternoon. “I mean, I feel like I have a lot more I want to ask.”

*This article appears in the April 30, 2018, issue of New York Magazine. Subscribe Now!