This is the most-SFW photo we could find you, readers.

Sesame Street’s creators are arguing how they built the show into a cultural phenomenon over the past half a century, solidifying a “reputation for wholesome educational programming” in the process. The trailer, they posit, depicts “explicit, profane, drug-using, misogynistic, violent, copulating, and even ejaculating puppets” that have “diluted and defiled Sesame’s beloved Sesame Street children’s television show.” In response, STX Entertainment, the film’s production company, issued a statement of rebuttal from Fred Esq. We should note that Fred Esq. is a puppet who looks like this: 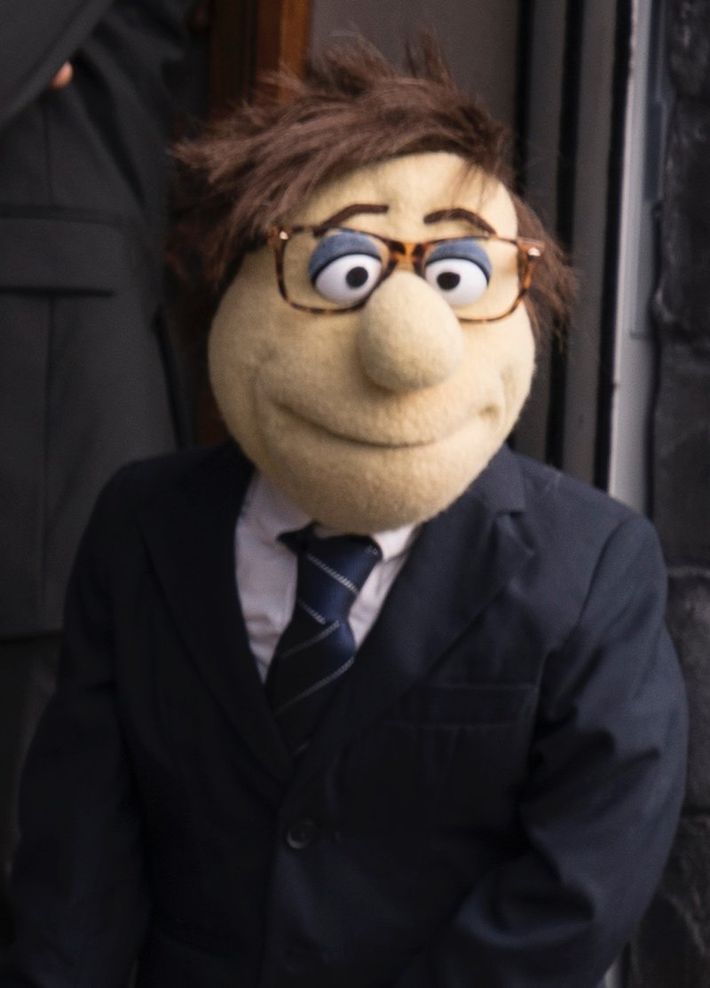 “STX loved the idea of working closely with Brian Henson and the Jim Henson Company to tell the untold story of the active lives of Henson puppets when they’re not performing in front of children,” Fred the Puppet Lawyer said. “Happytime Murders is the happy result of that collaboration and we’re incredibly pleased with the early reaction to the film and how well the trailer has been received by its intended audience. While we’re disappointed that Sesame Street does not share in the fun, we are confident in our legal position. We look forward to introducing adult moviegoers to our adorably unapologetic characters this summer.” He remains confident that the production company won’t give into Sesame Street’s demands, which is to permanently pull the advertising and reward them with unspecified monetary damages.

In conclusion, your honor, this is the greatest lawsuit of the century.

overnights 16 mins ago
Ramy Season-Finale Recap: It’s Maktoub Who among us hasn’t eaten a pork hot dog by mistake?
yikes 1:14 p.m.
George R.R. Martin’s Co-authors Are Not Fit to Post Rise of the Dragon co-author Linda Antonsson has repeatedly critiqued the casting of people of color on Game of Thrones and House of the Dragon.
overnights 1:00 p.m.
Ramy Recap: Dogs Are Haram The men are going through it in this episode.
trailer mix 12:46 p.m.
J.Lo Fights Pirates in a Ball Gown in the Shotgun Wedding Trailer Alongside a very handsome Josh Duhamel.
vulture 10x10 12:00 p.m.
The Mother-Son Puzzle 22-Across, Four Letters: Wolff who co-starred in Pig.
overnights 11:25 a.m.
Bachelor in Paradise Recap: The Worst Birthday These are way too many feelings to be having this early in the season, Genevieve.
rip 11:08 a.m.
Loretta Lynn, Country Legend, Dead at 90 Her raw and feminist country songs influenced generations of performers.
respect the classics 10:43 a.m.
Depeche Mode Return to the Studio and the Road After Fletch’s Death Dave Gahan and Martin Gore will tour and release a new album, Memento Mori, in 2023.
best of 2022 9:00 a.m.
The Best Podcasts of 2022 (So Far) The podcast universe is vast and strange. We’ve found the shows — both big and small, expected and unexpected — worth listening to.
"try everything" — shakira 8:50 a.m.
Bye, Guy In their first video as an official trio, the Try Guys say they were just as shocked by Ned Fulmer’s behavior as you were.
overnights 8:49 a.m.
90 Day: The Single Life Recap: Debbie Puts It All Out There Please, anyone who needs dating advice: Do not attempt anything Debbie does in this episode.
overnights 8:41 a.m.
The Patient Recap: In Treatment With Alan going through his own stuff, he doesn’t really have much left to give his patient. And Sam is pissed.
sleeper hit 8:00 a.m.
No One in Hollywood Wanted to Make Barbarian The horror hit’s journey to No. 1 packed in the twists: “I had a movie, I lost the movie, I rescued the movie, then I lost the movie again.”
By Chris Lee
ummm 1:30 a.m.
The Great British Bake Off’s Prue Leith Once Did What As a Child? According to her memoir, her mother once made her drown a bag of kittens.
grave of the fireflies Yesterday at 11:09 p.m.
Netflix Gives Firefly Lane a Big Good-bye The show will end with a supersized second season that drops in two parts.
overnights Yesterday at 10:01 p.m.
Kevin Can F**k Himself Recap: I’m Not Following You Allison needs to decide if she can leave Worcester — and Patty — behind.
theater review Yesterday at 9:00 p.m.
Economics Makes Strange Bedfellows in Cost of Living At Manhattan Theatre Club, two couples navigate their financial straits.
overnights Yesterday at 9:00 p.m.
Below Deck Mediterranean Recap: Jason Heads to Shore It’s too bad we didn’t get to see this side of Jason until he’s on his way out.
theater Yesterday at 8:16 p.m.
Andrew Lloyd Webber’s Next Broadway Musical Is Bad Cinderella Hopefully, this time he won’t call it a “costly mistake.”
overnights Yesterday at 6:11 p.m.
Ramy Recap: Ramy Is the Devil The Quran is the original blockchain.
More Stories