Today 50 Cent, who you last saw dancing with John Travolta, decided to mock a sexual assault victim because if you can’t think of anything good to post, why not be pointlessly cruel?

Terry Crews testified in front of the Senate Judiciary Committee earlier today about his sexual assault, to advocate for the Sexual Assault Survivors’ Bill of Rights. 50 Cent apparently had a big problem with this, even though no one asked him, and he decided to post a photo of Crews shirtless with the words, “I got raped / My wife just watched” and then another photo of Crews with a rose in his mouth that said “Gym time.” He then added a caption: “👀LOL,What the fuck is going on out here man? Terry: I froze in fear,😆they would have had to take me to jail. 🤨get the strap.” 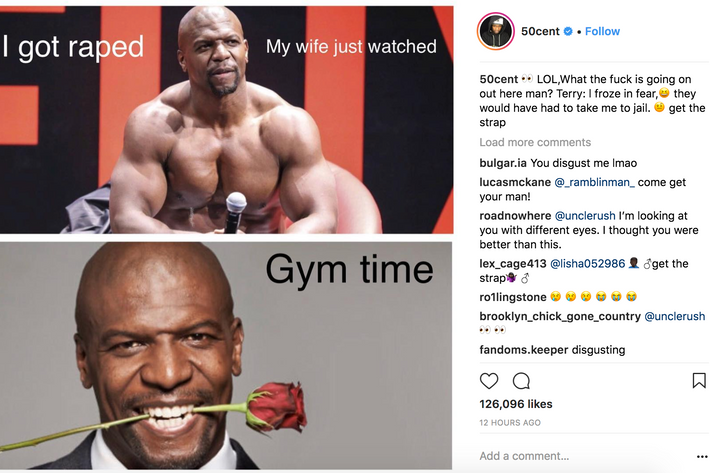 The cruelty of this is only outweighed by how not funny it is, and 50’s own comment section showed as much. It was filled with reactions like “disgusting” and “Garbage” and “This is why people hate you.” So, hopefully that was worth it.

TMZ caught up with Crews himself, who decided to go high with his response saying, “I love 50 Cent, I listen to his music while I’m working out.” When pressed to address what 50 Cent wrote, Crews responded, “I prove that size doesn’t matter when it comes to sexual assault.” So, you can’t see it, but we’re starting a slow clap.