After the Correspondents’ Dinner, a merciful break from politics. 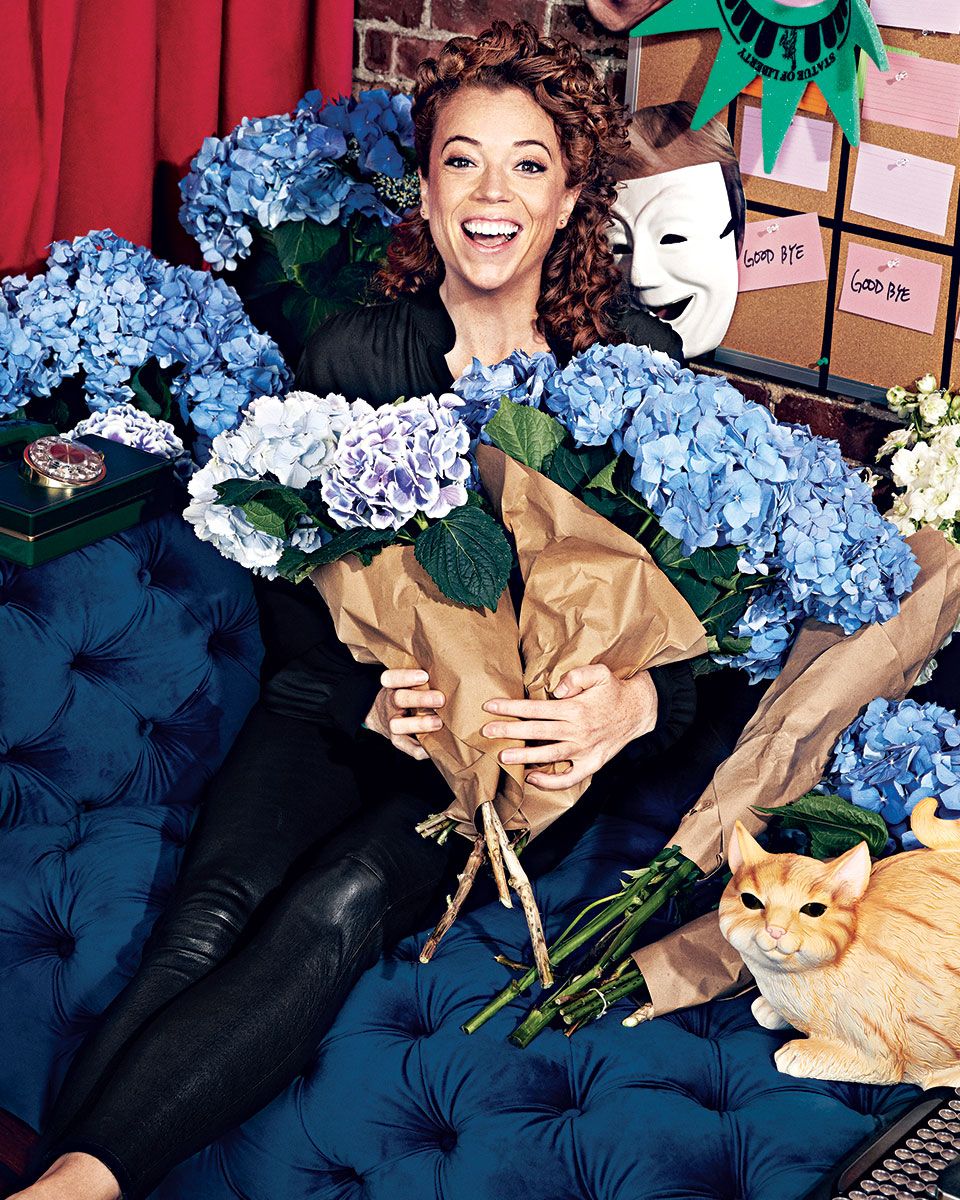 When Michelle Wolf says she didn’t pay that much attention to all the hoopla that followed her White House Correspondents’ Dinner speech, in which she called Sarah Huckabee Sanders an Uncle Tom for white women, she is probably being at least a little bit disingenuous. That she has been very busy, though, is true: The week after, she flew to Utah and ran a 50-mile “ultramarathon” on a salt flat in just over 12 hours. After that, back to New York to put the final touches on The Break With Michelle Wolf, her very own Netflix show, which debuted last month.

“I literally just left D.C. as fast as I could,” she says. Everything Wolf says comes out of one side of her mouth in an abrasive half-shriek, with flat, unglamorous, mid-Atlantic vowels. (“I’m Michelle Wolf,” she says at the beginning of the show, “and, yes, this is my real voice!”) She laughs at the end of most of her sentences, often adding an “Oh God, I’m sorry” grimace. It’s a way of softening the blow of her dirty jokes (one favorite has to do with Donald Trump “pulling out” of the Paris accords) — of communicating to the audience that she knows her jokes are not always in the best taste, but this is what the world has come to and what do we expect?

But even if she’s tried not to dwell on that April night, it’s impossible to deny that it was quite a big thing to perform for all those openly bared fangs, to deliver joke after joke designed to push buttons, on topics like abortion, rape, and how Jake Tapper orgasms. Was it awkward calling Huckabee Sanders a liar when she was seated just feet away, cameras trained on her reaction? “No!” Wolf says, batting her hand away and laughing. “It was gross! Like, I saw Jeff Zucker hugging Kellyanne Conway, and it was just like, Oh! You’re all in this together! People are really getting hurt, and you guys are just celebrating your money. It’s all a game, nothing more than ‘How will we best profit off of this?’ It was icky.”

And besides, Wolf says, she doesn’t even recognize her own jokes in the fray they kicked up. Many complained that it was unkind of her to go after another woman’s looks — no one, it turns out, wants to be compared to Aunt Lydia on The Handmaid’s Tale — but Wolf swears that was not her intention. “Before we started writing, we made a conscious decision to not make fun of any woman’s looks,” she says, “because then that’s all anyone will hear. So we didn’t do it, and then it was like, Oh, it’s all about the looks, but it wasn’t! It was about abilities! But I guess as soon as you’re making a joke about women, it’s heard as a joke about her looks. But what I’ve decided about it all is this: If you hated the Correspondents’ Dinner, then you’re really going to hate the show!” She smiles gleefully.

The first episode of The Break, which is a mash-up of interviews and monologues and sketches, features a segment about the women she is angry at that week (including Huckabee Sanders, whom she calls an “expert on hypocrites” with the “Mario Batali of personalities”); a faux trailer for a film called Featuring a Strong Female Lead: The Movie with a star who dresses like Kerry Washington on Scandal and uses the catchphrase “I don’t have time for emotion in my sex!”; and a conversation with guest Amber Ruffin about the choice to not have children, complete with jokes about broken vaginas.

At 32, Wolf is still a millennial, which means she is young enough to have missed the days when comedy was almost exclusively male, but her staff jobs were at The Daily Show With Trevor Noah and Late Night With Seth Meyers in relatively diverse writers’ rooms, and she says that she always felt both heard and seen, certainly more than she did in her previous jobs in both finance and tech, where she and her female co-workers “could have each had our own bathroom.” Also, Wolf comes a generation after Tina Fey and Amy Poehler, and it’s impossible not to watch her HBO special Nice Lady, in which Wolf jokes, “I do have a theory on why Hillary lost. I think it’s ’cuz no one likes her,” and not be reminded of Tina Fey’s “Bitch Is the New Black” SNL sketch: “People say Hillary’s a bitch. Let me say something about that. Yeah, she is. So am I … And you know what? Bitches get stuff done!”

Comedy is still far from equitable these days, but at least the problem is publicly acknowledged and debated. One of the recurring gags on Late Night is “Jokes Seth Can’t Tell” — the conceit being that straight, white Seth Meyers can’t deliver certain punch lines without offending. Meyers: “A new study has found that women shop on Amazon more often than men.” Wolf: “Because women are more familiar with the concept of waiting two days to come.” Meyers: “Michelle!” Wolf: “I have Prime.”

Wolf’s comedy career began only about ten years ago, when she was working at Bear Stearns, joined friends at an SNL taping, and was inspired to start taking improv and stand-up classes at Upright Citizens Brigade. She began doing stand-up in 2011; after she was laid off from her job as a recruiter at a biochemistry lab, she used her severance to pursue comedy full time. In 2014, she was hired as a writer at Late Night, where she would appear onscreen as “Grown-Up Annie” (she has wild, curly red hair). Wolf worked often at the Comedy Cellar, where she was mentored by Louis C.K., about whom she now says only that he was generous and supportive of her. Then she moved on to The Daily Show as a correspondent, where an emotional segment about the results of the 2016 election led to Nice Lady.

The Correspondents’ Dinner made Wolf famous in a way she hadn’t been before. In the month leading up to it, she performed her set at least 15 times in front of live, unscreened audiences at the Cellar on Macdougal Street. Trump the paranoiac might be interested to know that there was not a single leak. “My agent’s biggest fear was that someone was making a recording and was going to release it, like, the Friday beforehand, but nope!” It’s hard to imagine she’ll get that kind of anonymity ever again.

On her show, Wolf is determined to pursue a sort of free-form satire that is not overtly political, not least because political comedy is a crowded field these days, often taking the place of news. “People are getting their news from comedy, because you turn to a news station and it’s like four guys sitting around talking about their opinions and selling their books,” she says. “I think news should have that responsibility, to be accurate. It’s not fair that comedy has that responsibility. But jokes are always funnier when they’re rooted in truth.” So while a bulletin board in her office is stuck, each day, with the biggest stories of the day on a recent Friday afternoon (“Aaron Schlossberg,” “North Korea”), she won’t necessarily cover them. “We’ll make fun of Jared Kushner a lot,” she says, “but I’m not necessarily going to do a deep dive on net neutrality.”

*This article appears in the June 11, 2018, issue of New York Magazine. Subscribe Now!