I’ll say this for Juliette. She reliably brings the crazy. If the first two episodes of this half-season were a bit dull, this “Prison Break in Bolivia” episode is completely, deliciously off the rails.
I knew we were in for a treat when the show began at what I first assumed was the set of some intentionally bad play — a smattering of badly blocked extras doing “labor” in an old-timey village — but was in fact supposed to be the actual location of the Center for Coherent Philosophy in Bolivia. And then Juliette angrily emerges — all coiled, righteous rage — and they zoom in on her… Arthur Struggle Fist! Y’all saw that fist, right? That had to be intentional. (If you don’t know what the Arthur Fist is all about, here’s a primer.) 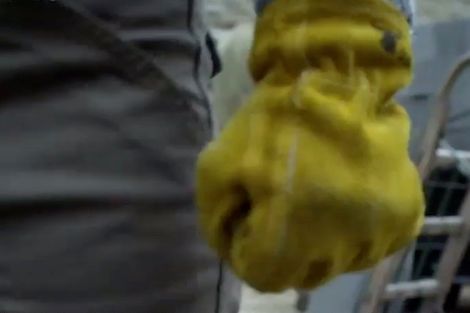 She’s mad because some female cult member asked for a break multiple times, was denied each time, and then fainted in the sweltering heat. Juliette (who’s suddenly a champion of the oppressed?) wants to speak to Darius, and she wants to speak to him right now! Center officials try to calm her down but eventually take her to Darius, who pretends to be as upset about the incident as Juliette is. She tells him she wants to go home, and he says, “I need your help if we’re going to get to the bottom of this.” He asks her to stay one more night and she reluctantly agrees.

The next thing you know, Juliette is being visited by a creepy, gaslighting duo straight out of a horror film, who keep telling her in disconcertingly soothing voices that she’s in an agitated, unstable state and needs to calm down. Then they lock her into her room and assign a freaking guard to her door.

Alright, we’ll return to Juliette and her Midnight Express moment in a bit, but now let’s get all the Alannah nonsense out of the way. Man, they are really trying to make Alannah happen, aren’t they? She’s, like, the new star of the show or something.

The Last Highways are attempting band practice, but it’s not going that well. Gunnar and Avery are still fighting and Will is stuck in the middle. (Remember when Will had a heart attack and was addicted to steroids? Good times.) Gunnar basically accuses Avery of violating the bro code and Avery says he thought that was a girl thing. (Dude, what part of “bro” didn’t you understand?)

Gunnar asks Will if he would’ve immediately dated a friend’s ex.
“I wouldn’t have done it,” he admits, quickly adding, “But I wouldn’t have gotten upset if someone else had done it.” Thank you, Switzerland.

Just then, Alannah pops in, all ready for band practice, and Avery gives her the cut sign and she skedaddles. A few minutes later, he joins her in the car (they came together?) and says there won’t be any band practice today. “I feel like I’ve created nothing but trouble,” Alannah says, accurately. “That’s crazy,” Avery says, inaccurately.

Later, Alannah takes a meeting with Brad and he gives her the hard sell for Shiny New Records. He can be charming, in a snakelike sort of way, and she’s convinced. Then Jessie goes to visit Alannah at the vintage clothing store she suddenly works at. And it’s the scene no one was clamoring for: Jessie and Alannah, together at last! Jessie gives Alannah good advice, basically to stay away from Creepy Brad and his creeptastic ways, but the dye has already been cast. She’s signing with him.

All of this leads to a very drunk Alannah calling Avery and being dramatic about how she ruins everything. Avery goes to her apartment and she tries to push him away. “How can you even look at me when I freaked out on you like that?” she moans. “You had my feelings all over you, like the girl in The Exorcist.” (She really needs to revisit that movie.)

He tries to appeal to her, using a “misery loves company” angle. “In case you hadn’t noticed, I’m kind of a mess right now,” he says. “Maybe we can be messes together,” she says, hugging him. Our boy can really pick ’em, huh?

Anyway, before we get back to Juliette, let’s take a moment with Jonah, Maddie, and Twig, whose hair is getting concerningly long. We now know for a fact that Jonah is cheating on Maddie with that starlet, Mia. He claims he wants to break up with her but can’t, because Mia threatened to hurt herself. But then Jonah lets it slip that he’s staying with her until her big movie comes out. “She’ll get all this attention,” he tells Twig. “I’ll tell her then.” (Translation: He wants to be on her arm for the premiere.)

Twig, who’s apparently more familiar with the Bro Code than Avery, promises not to tell Maddie, but that’s not going to keep him from pining away for her. He goes to Maddie’s house and is all awkward and stammering and adorably Twig-like and then finally tries to kiss her. She pulls away, abruptly. “I’m in love with Jonah,” she says. Maddie, no!

Twig is upset, but says he’ll try to handle life in the Friend Zone.
Can a single person on Nashville make the correct romantic choice?
Okay, finally back to Juliette who has a big reveal: She’s pregnant! Uh boy. Juliette pregnant has to equal Javery end game, right? I know that just a few months ago I was saying that Javery was dead to me, but this baby puts a dent in my (already shaky) convictions. And honestly? Juliette is way better than Alannah.

But first Juliette must escape her Bolivian captors (is a sentence I just wrote). Some woman named Rosa has been assigned to watch over her. It turns out that Rosa is also being kept against her will, along with her young son, who is being kept away from her on lockdown. (So much for providing escapism, Nashville. Thanks. Thanks a lot.)

Juliette and Rosa come up with some wacky scheme that involves Rosa flirting with the guard and getting his keys and Juliette stealing some important file? (I was a bit lost on that bit, to be honest.) This will somehow lead to Juliette escaping. She wants to take Rosa with her, but Rosa feels like she can’t risk it because of her son. Juliette is concerned that everyone will know Rosa was her accomplice, but Rosa says that she’ll make a big stink about Juliette going missing, so as to deflect any suspicion. But here’s the thing: she does it way too soon. Like, literally 30 seconds after Juliette has made a run for it, Rosa is screaming bloody murder to the whole Center about it. Yeesh, you’re supposed to give your accomplice a chance to get away first, Bonnie Parker.

So there’s a car following Juliette on the path as she runs away and I was sure it was going to be Darius, or one of those creepy gaslighters, but instead it’s some villager who looks like Charles Manson. “Airport?” Juliette says in Spanish, after she flags him down.
And he’s on it. The fact that Juliette getting into Charles Manson’s car on a dirt road in Bolivia is her happy ending tells you exactly how her life is going.

Keep up with all the drama of your favorite shows!
This site is protected by reCAPTCHA and the Google Privacy Policy and Terms of Service apply.
By submitting your email, you agree to our Terms and Privacy Notice and to receive email correspondence from us.

+Comments Leave a Comment
Nashville Recap: The Struggle Is Real