The Rickaverse is expanding at an accelerating rate. Adult Swim’s megahit, adults-only cartoon sci-fi series Rick and Morty, which last fall completed its third season, has recently been renewed for 70 episodes. It’s also spawned an array of products to sate viewers’ thirst for the show’s blend of wit and nihilism. Some are fan-made, others are official, and none of them will make any sense to those uninitiated. We asked the show’s creators, Justin Roiland and Dan Harmon, to discuss some of their favorites.

Justin Roiland: “I don’t even know what to say about this one. People dress their kid up like R2-D2, and people get decapitated and stuff in that franchise.”

Dan Harmon: “These allow you, an Earthling, to imagine how ridiculous the stuff that you display would look to an interdimensional traveler. Like wearing a crucifix.” 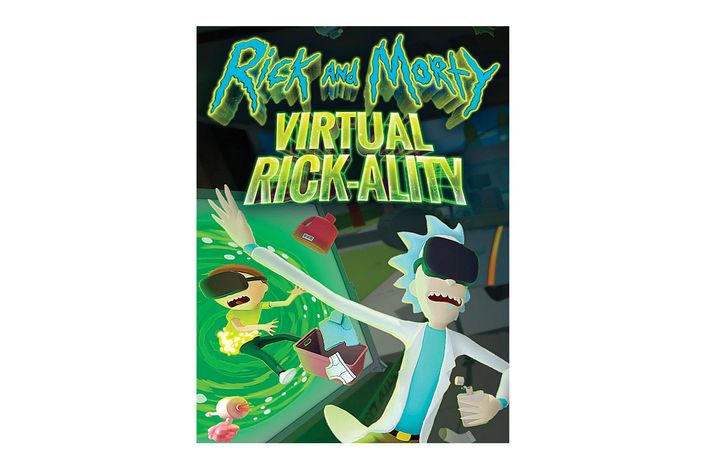 DH: “If the show had a canonical truth, you could screw it up with a game. But Rick is drifting through the multiverse. There are infinite versions of him.” 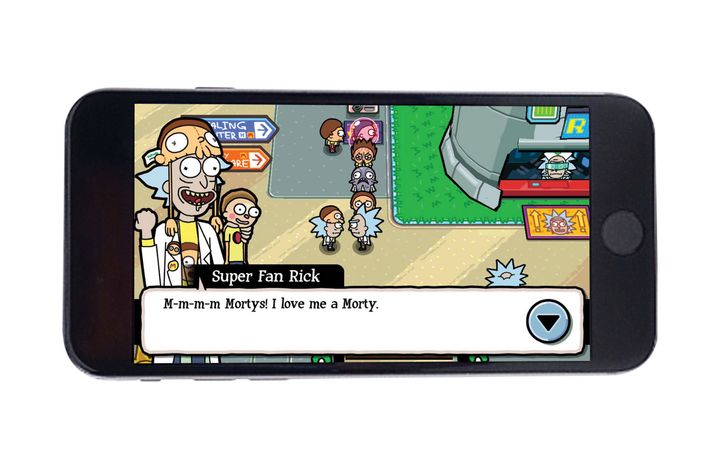 DH: “I play it constantly. You can have a lot of creative liberty there with, ‘Which Rick is this? Is this the main Rick? Is this some side Rick?’ ” 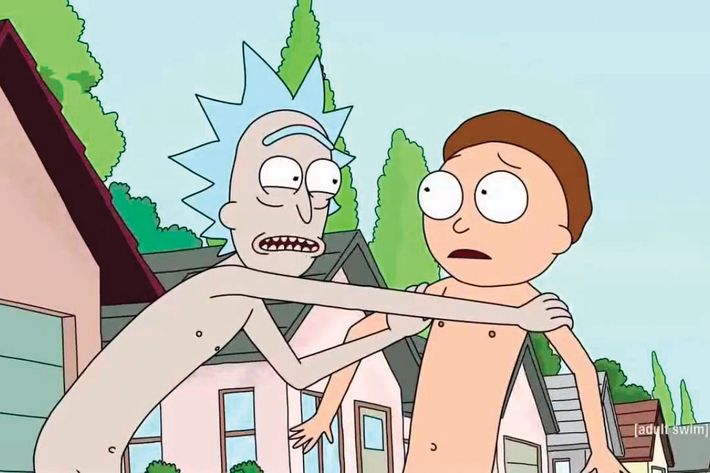 JR: “I try to stay away from that stuff.” 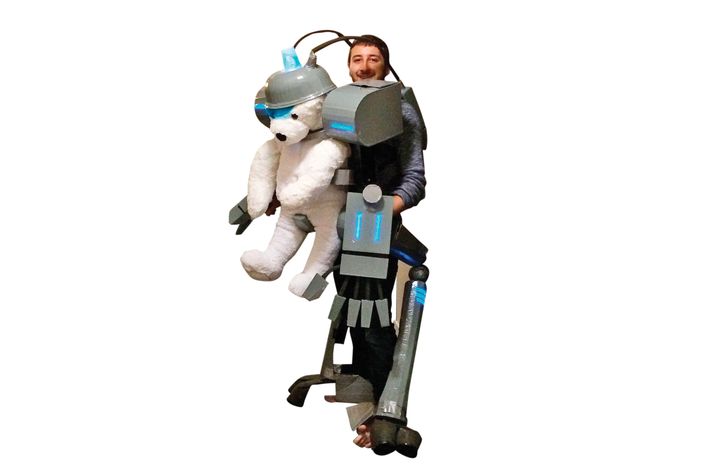 DH: “I’m addicted to the Halloween surge of pictures of people dressed as characters from my show. I get scared that I anticipate it too much. It’s such a dopamine spike.”

JR: “Maybe it’s a bathrobe? You can wear it as a costume. They’re all-in-one. I’m sure they must exist for other franchises, I guess. I’ve just never seen it.”

JR: “I mean, this show is definitely not for kids. I think for the backpacks … I don’t know. The show’s PG-14, so it’s like, ‘All right. I think that’s okay.’” [A representative from Adult Swim clarified that the backpacks are intended for adults.]

JR: “My favorite one is the Portal Gun. It has a light inside of it, and when you pull the trigger, it makes a sound and then actually projects a portal against the wall.”

JR: “I’m way into buildables, and snap-together model kits, and Lego, and all that kind of stuff. To have sets that are based on a thing that you created is very surreal.” 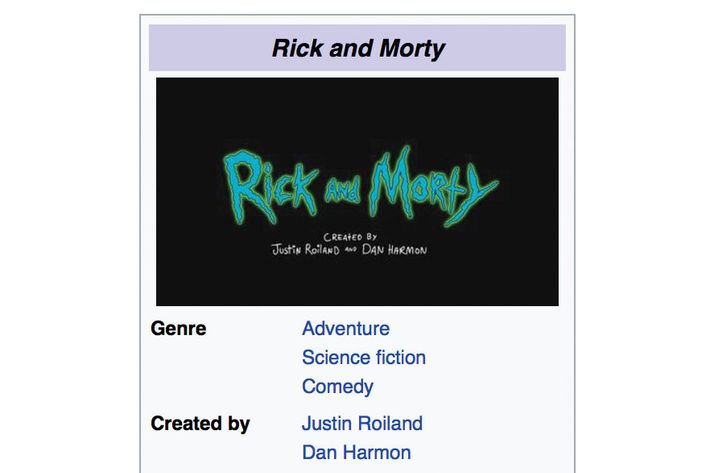 JR: “I looked at it back when it was three sentences. I’m assuming it’s probably a lot bigger now, but yeah, I haven’t looked at it in so long.” 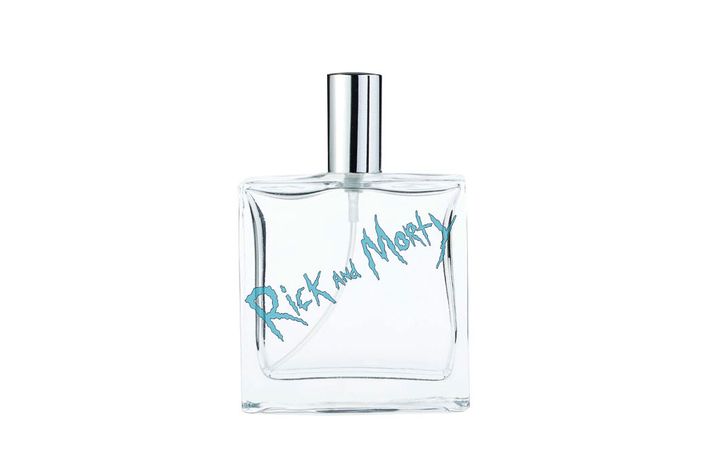 JR: “They were talking about perfume, and I was just like, What? What the fuck is that gonna be?”

*This article appears in the June 11, 2018, issue of New York Magazine. Subscribe Now!

fake teens 11:41 a.m.
Viral Twins Gave Phil Collins’s ‘In the Air Tonight’ a 1,000 Percent Sales Bump Their impact!
overnights 10:51 a.m.
Below Deck: Mediterranean Recap: Triple Date Poor planning on Malia’s part for picking her one petty battle of the season with this show’s most experienced crew member and reality star.
last night on late night 10:27 a.m.
What’s Going on With Hannah’s Valium on Below Deck: Med? “I already had my bunk at that point. It was because it’s my duty to.”
stage dives 10:00 a.m.
Donald Trump’s One-Show Career As a Broadway Producer If he’d had a hit in Paris Is Out!, the world might be in a better place now.
last night on late night 9:58 a.m.
James Corden Makes a Very Painful Return to the Late Late Show Studio It’s the price you pay for safety.
book excerpt 8:00 a.m.
Can You Hack the Jeopardy! Buzzer? Different schools of thought have emerged.
By Claire McNear
last night on late night 3:00 a.m.
Stephen Colbert Returns to (Somewhere Within) the Historic Ed Sullivan Theater The Late Show is home or, at least, very close by.
last night on late night 1:30 a.m.
If You Wanna Believe Anything Could Stop Dua Lipa, Don’t Watch Her Host Kimmel The singer stopped by to give her first monologue and get roasted by her elders.
overnights Yesterday at 10:30 p.m.
Canada’s Drag Race Recap: This Is Garbage, Mawma The queen to beat has left the building.
trailer mix Yesterday at 10:01 p.m.
Netflix’s Away Trailer: Mars Needs Moms, But Dammit, So Do We Hilary Swank stars in the upcoming sci-fi drama series, which premieres on September 4.
overnights Yesterday at 10:00 p.m.
90 Day Fiancé: The Other Way Recap: The Proposal We’ve Been Waiting For Kenny and Armando may be the season’s best couple, but this week is a good inventory of the issues they still need to work on.
overnights Yesterday at 9:33 p.m.
I May Destroy You Recap: Forgive a Little Now that Arabella has cleared the tension between her and Simon and relieved a guilty Terry, will she be able to forgive herself next?
concerts Yesterday at 8:42 p.m.
Packed Crowd Turns Up for Smash Mouth Concert Despite the Coronavirus Pandemic Hey now.
accept some substitutions Yesterday at 7:33 p.m.
Kelly Clarkson Steps Into Simon Cowell’s America’s Got Talent Shoes After Injury She’s filling in as guest judge after Cowell broke his back in an electric bike accident.
now streaming Yesterday at 6:30 p.m.
The 30 Best Movies for Kids on Hulu Free Willy, Antz, Abominable, and more.
live comedy Yesterday at 6:20 p.m.
Is Dave Chappelle Shooting Another Netflix Special? His recent shows, which feature Louis C.K. and others, are definitely being taped.
movies Yesterday at 5:36 p.m.
Behind the Fantasy of the 1997 Movie Cop Land “It was about a world in which everyone’s so tribalized and traumatized,” says director James Mangold, “no one has the emotional space to exist.”
By Bilge Ebiri
remakes Yesterday at 5:12 p.m.
Zac Efron Will Star As One of Three Men or a Baby in Three Men and a Baby Reboot Could go either way, really.
on comedy Yesterday at 5:05 p.m.
Unaired 2018 Black-ish Episode About Trump Is Now on Hulu It was originally scrapped by ABC due to “creative differences.”
sure Yesterday at 4:58 p.m.
Patrick From SpongeBob, a Born Star, Gets Late-Night Show Move over, Elmo.
More Stories