Instagramming New York by night on her first publication day. 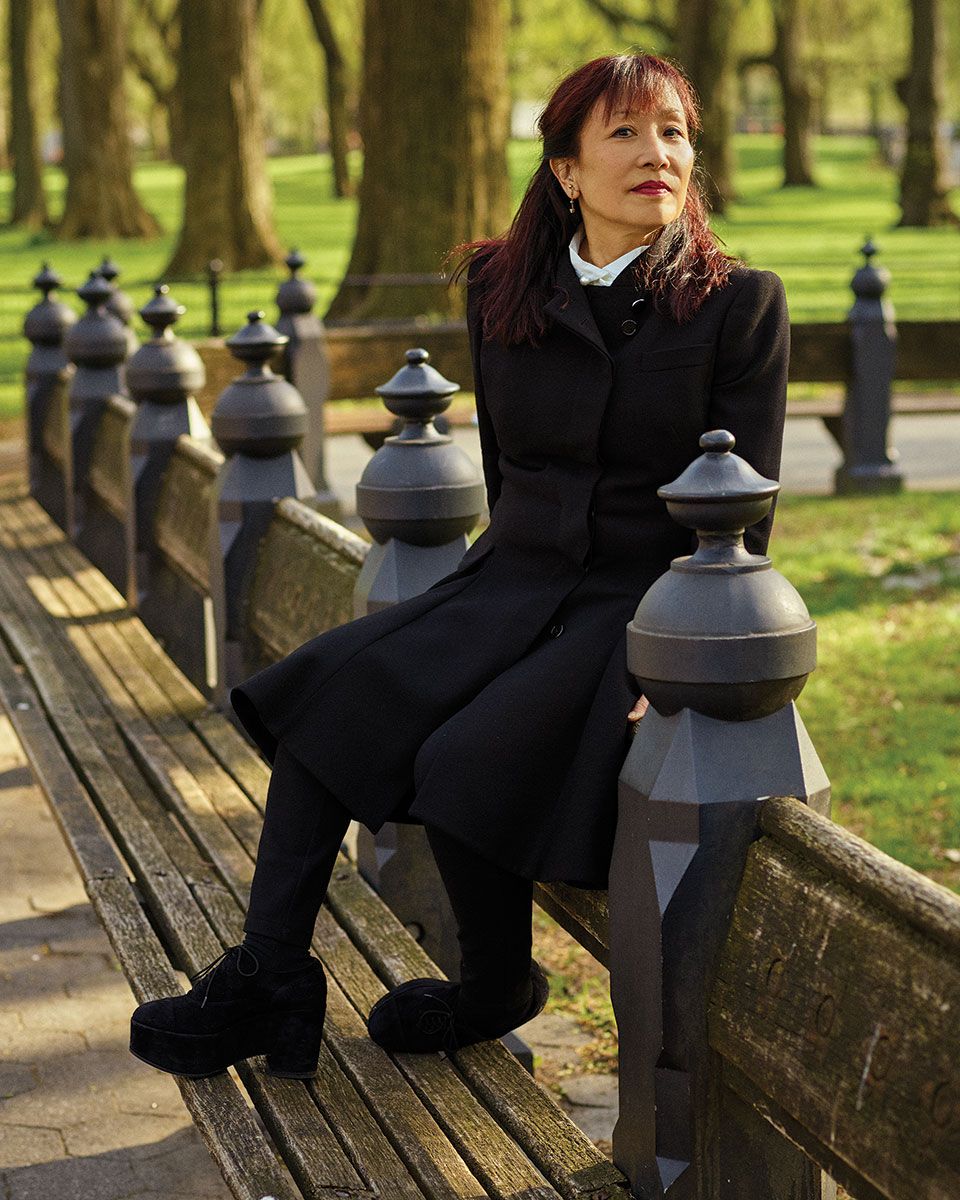 It’s 8:50 p.m., ten minutes before closing, and Michiko Kakutani is riffling through vinyl at A1 Records on East 6th Street, searching in vain for a copy of Beggars Banquet. “The Stones are my all-time favorite,” she says. “I wonder if they have any other Keith stuff here.” Kakutani worships Keith Richards. “I think he’s the heart and the soul of the Stones,” she explains. “He’s just inhaled all blues and musical history and he really wants to pass that knowledge on. I thought his memoir was totally amazing.”

Her opinion of that book is more important than yours, or mine, or anyone’s. That’s because in 2010, as chief book critic for the New York Times, she reviewed it. For three decades, hers was the most influential voice in publishing, her name itself turned into a verb. (You never wanted to be “Kakutanied.”) The line on her as a critic, loosely speaking, was that she was generous to talented newcomers and unforgiving of old lions who’d begun to coast. She memorably took down Norman Mailer, who hit back with flat-out racism.

Now she finds herself in the position of the reviewed rather than the reviewer. Last summer, she took a buyout from the Times after 38 years and began work on a slim book of her own. The Death of Truth: Notes on Falsehood in the Age of Trump has gone on sale the morning before we meet in the record shop. She helps me pick out two ’90s deep-house records and, as we exit, whips out her iPhone and points it toward the back of the store. The next day on Instagram, the photo appears: “A1 Record Shop, NYC #Vinyl #NYC.” It’s up to 256 likes (and counting).

A few years ago, we might not have met. Until recently, you were likelier to have seen a snow leopard in Manhattan than to meet Kakutani in the wild. She is a workaholic who routinely writes through the night. She has everything sent to her Upper West Side apartment, from vintage dresses found on eBay (“Vintage stores in New York got really picked over”) to grilled cheese sandwiches. “I’m not much of a cook,” she says. “I used to keep books in my gas oven, until someone told me it was a fire hazard.” Yet in person, she’s talkative and prone to laughter. We step out into the night, wandering in a vaguely downtown direction, stopping to snap anything that looks cool along the way.

Owing to the new book, she’s being prodded to emerge, if only a little. “I am shy and self-conscious and awkward, so I think that’s why I became a writer,” Kakutani says. “I was the kid in class who was afraid to get called on.” TV appearances are out of the question. But she has revealed herself to a new degree. Known for never using the first-person pronoun in reviews (it was always “the reader”), she recently filed a piece to the Times’ “Sunday Review” section that was, for her, unprecedentedly personal. Kakutani’s mother and aunt, she revealed, had been among the Japanese-Americans interned in the Utah desert in 1942. “I find it hard to write in the first person,” she says. “But I felt motivated because of those poor kids at the border.”

On Second Avenue, we step around a teary couple rooted to the sidewalk mid-breakup. A few blocks later, she shakes her head at a Citi Bike rack, saying, “Why do they have to make them so ugly?”

The Instagram feed is the main concession she’s made to public digital life. She started it at the suggestion of her book publisher a few months ago and now says she’s “addicted.” It reveals only so much: @michi_kakutani (1,628 followers as of today) is a stream of street scenes and atmospheric shots of favorite bookstores and restaurants. (“I don’t take selfies.”) And then there are her two other accounts, each with zero followers; one consists entirely of black-and-white pictures of the street, the other a mix of photos she’s still experimenting with, including a rare one of herself, shot on a recent visit to Instagram’s New York offices. “My friends don’t even follow these accounts,” she says, “but sometimes I take them out at dinner to show people.” And no, she won’t reveal the usernames.

Kakutani has always had a thing for photography. In college, she spent a semester studying art in Paris at the Académie Julian. Then it was back to Yale, where her mathematician father, Shizuo, was a professor. (His Kakutani fixed-point theorem, impossible to explain in lay terms, is significant in set theory.) “I didn’t get the math gene,” she says. “I think they realized that early on. But in college I did a lot of darkroom stuff with 35-millimeter, and I used Tri-X film. I loved the darkroom — it’s a magical process.”

Continuing west on Bond, we pass a group of girls posing on the stoop of a building while a friend impatiently takes their picture from different angles. “Ready?” asks the friend, adding, “C’mon guys, let’s go. I know you’re Instagram-famous, but we’re late.” Kakutani laughs. “I realized a lot of the people I take photos of while walking around New York are either bent over their phones with their heads poking out, turtlelike, or taking photos of themselves or each other,” she says.

On Varick, we talk of pre-cell-phone New York. Kakutani says one of her favorite haunts back then was Heartbreak, a club on this street between King and Charlton. “We used to go there to dance.” Kakutani frequented CBGB, where she would go to hear the Ramones and Talking Heads. “I’m so short I could never actually see the bands,” she says. (She’s five feet tall.)

We cross Canal and begin discussing Trump and his absurd “double negative” remarks. “He’s rendering language meaningless,” she says. “It’s all this chaos all the time. I do think he’s like the Joker. He thrives on chaos and anarchy, and it’s all part of getting people cynical so they don’t care, just like in Russia.”

It’s after midnight, and she is warming to her subject. “The propaganda in Russia that Putin puts out is getting so parallel to Trump,” she says. “It has the psychological and emotional effect of wearing people down, and that’s what people have to not let happen.”

Then she spots some graffiti scrawled across a building on the other side of the street. “Look, that’s so cool,” she says. “It reminds me of Basquiat or something.” She darts over to take a picture.

*This article appears in the July 23, 2018, issue of New York Magazine. Subscribe Now!

+Comments Leave a Comment
Talking Instagram, Trump, and Old NYC With Michiko Kakutani
chat room 9 mins ago
Conversation with Friends’ Jemima Kirke Knows Why Melissa Allowed Nick’s Affair “It’s impossible that she’s this selfless.”
korg core 9:48 a.m.
Thor: Love and Thunder Trailer Blurs Chris Hemsworth’s Butt And introducing … Natalie Thortman!
superlatives 9:00 a.m.
The Loudest and Wittiest of Def Leppard, According to Joe Elliott “We were young enough to enjoy it without killing ourselves.”
By Devon Ivie
let's do it again 9:00 a.m.
Come Watch a Sequel in the Park With Us Bryant Park Movie Nights are back this summer.
solidarity forever 2:05 a.m.
Activision Blizzard Employees Win Vote to Form Company’s First Union On the same day that federal labor officials alleged that the gaming company illegally threatened staff.
no thank you Yesterday at 11:00 p.m.
Riley Keough Says She Didn’t Want to Star in Baz Luhrmann’s Elvis You know, the biopic about her grandpa.
overnights Yesterday at 10:11 p.m.
Better Call Saul Mid-Season Finale Recap: The Beginning of the End Better Call Saul conned us just as brilliantly as Kim and Jimmy conned Howard.
overnights Yesterday at 10:00 p.m.
We Own This City Recap: No Honor Among Thieves These guys cannot turn on each other fast enough.
overnights Yesterday at 9:30 p.m.
Below Deck Sailing Yacht Recap: Sequins and Wigs Gary’s need to flirt continues to cause chaos on the Parsifal III.
work wife Yesterday at 9:05 p.m.
Jason Momoa Apparently Pushed for Amber Heard to Keep Her Aquaman 2 Role According to expert testimony in Johnny Depp’s defamation trial.
overnights Yesterday at 9:00 p.m.
For All Mankind Recap: A Fine Romance Trope For All Mankind gets jam-packed with tropes from romance novels. Who knows if it was intentional, but it works.
extremely online Yesterday at 6:26 p.m.
Halsey Goes Viral in an Attempt to Avoid Going ‘Fake’ Viral on TikTok Claiming their label won’t let them release a new song yet.
exes Yesterday at 5:46 p.m.
Kate Moss Will Testify Wednesday in Johnny Depp’s Trial Depp’s team is also planning on calling him back to the stand later this week as a rebuttal witness.
the law Yesterday at 5:19 p.m.
Gunna Denied Bond for Gang Charge, Trial Set for January The rapper’s attorneys denied he would be a risk for witness intimidation.
endings Yesterday at 3:00 p.m.
The Empty Symbolism of Men’s Ending Alex Garland’s Men is laden with symbolism, much of it provocative and highly gendered. But what does it all add up to?
By Katie Rife
manchester's finest Yesterday at 2:13 p.m.
Liam Gallagher Hops Aboard His Own ‘Magic Bus’ His maraca-infused track, “World’s in Need,” was inspired by the Who.
cannes 2022 Yesterday at 1:01 p.m.
The ‘Eat the Rich’ Comedy Making Cannes Say ‘Blech!’ In Triangle of Sadness, Ruben Östlund rubs audiences’ noses in shit. They love him for it.
By Nate Jones
decisions decisions Yesterday at 12:15 p.m.
Everything to Consider When Making a Comedy Special Special Aside from what jokes to tell.
By Kathryn VanArendonk
vulture 10x10 Yesterday at 12:00 p.m.
The Hazza Puzzle 33-Across, Five Letters: Hitchcock role in a Hitchcock film, e.g.
beginning times fun Yesterday at 12:00 p.m.
The Special Special Stand-up isn’t just getting prettier onscreen. It’s growing up as a distinct art form.
By Jesse David Fox
More Stories