As one of the greatest mustachioed gents of all time would say: Wa wa wee wa. Very nice news you’re about to read! With the curious case of Sacha Baron Cohen’s new comedy series for Showtime growing more mysterious each day, Vulture has some intel that can help solidify what shenanigans Cohen has gotten up to. As spotted by our editors in Park Slope, Brooklyn, this weekend, it appears Cohen’s Showtime series will be called Who Is America? “You’ve been warned,” the posters tease, while giving us the first glance of Cohen’s character — a guy suspiciously peeking out of American flags with various eyewear. It’s kind of like that one Talking Heads album cover, but way more Republican. 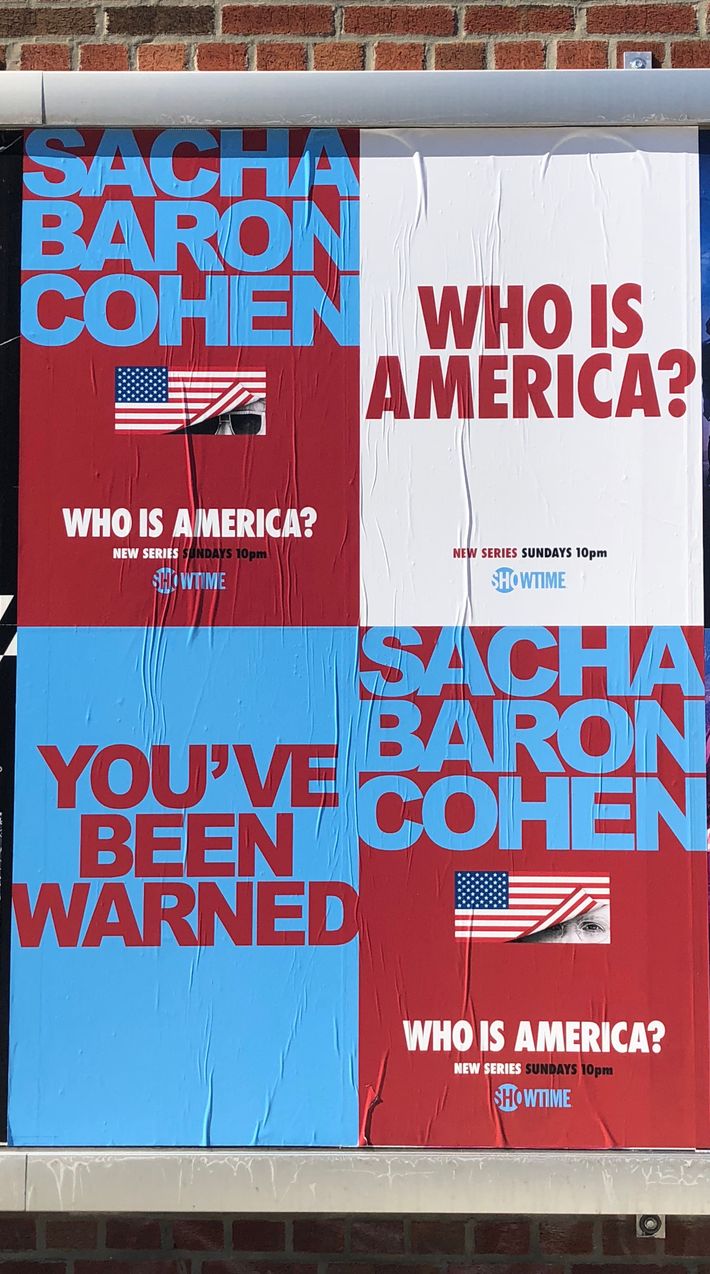 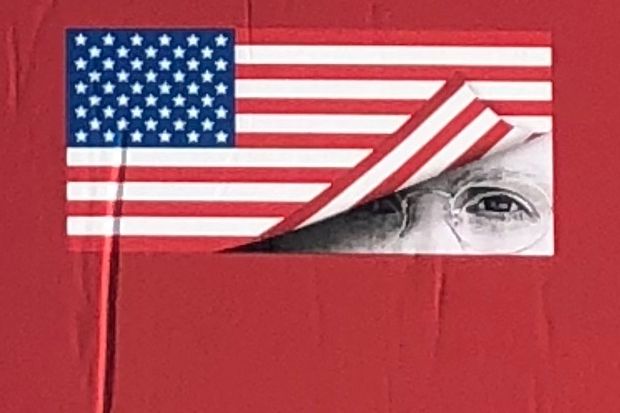 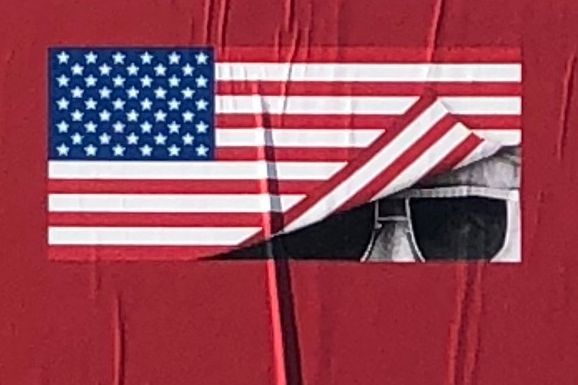 When Cohen’s show — slated to premiere on July 15 — was cryptically announced by Showtime last week, the network described his character as being “shameless,” “unhinged,” and “cold-blooded.” Oh, and that it might be “perhaps the most dangerous show in the history of television.” It will also likely involve some President Trump bashing. As for Cohen, he’s remained mum except for this tweet:

A message from your President @realDonaldTrump on Independence Day pic.twitter.com/O2PwZqO0cs

Are Sacha Baron Cohen and Showtime About to Release a Secret Trump Show?

urgent reconsideration 29 mins ago
Atlanta Season Three Was a Bad Trip After a two-year break, Donald Glover’s FX series returned unsure of what it wanted to say. Four Vulture writers and critics try to make sense of it.
bound 2 (remix) Yesterday at 11:44 p.m.
Ye Thanks/Blames Diddy for His ‘Wife Choices’ “Thanks for that, Puff.”
comedy writing Yesterday at 11:30 p.m.
For Kevin Iso, Interesting Beats Funny Talking Flatbush Misdemeanors and That Damn Michael Che with the comedian and writer.
overnights Yesterday at 11:06 p.m.
P-Valley Recap: The Real Househoes of Chucalissa The Pynk is an absolute mess and the future of the club is in question.
i'm up! Yesterday at 10:44 p.m.
Doechii Snatched Her Own Wig at the BET Awards She came, she served, she conquered.
my single is dropping Yesterday at 10:07 p.m.
Cardi B Announces New Single During BET Awards While not being physically present at the event.
overnights Yesterday at 10:00 p.m.
Westworld Season-Premiere Recap: Christina’s World It’s several years into the new world and everyone has made news lives for themselves — but nothing good lasts long in Westworld.
overnights Yesterday at 9:30 p.m.
The Real Housewives of Atlanta Recap: Drop It With Drew & Co. An investigation into Drew’s weight-loss program.
murked on his own beats Yesterday at 9:20 p.m.
Jack Harlow Probably Knows Who Brandy Is Now The rapper performed with the R&B legend and Lil Wayne at the 2022 BET Awards.
overnights Yesterday at 9:00 p.m.
Becoming Elizabeth Recap: Elizabeth Learns a Lesson Catherine Parr, we love you.
2022 bet awards Yesterday at 8:16 p.m.
BET Awards 2022: Full Winners List Congrats to Director .Paak!
peg the patriarchy Yesterday at 7:29 p.m.
Jack Harlow Brought Lil Nas X (the T-Shirt) to the BET Awards “Wow i really love this man,” says Lil Nas X.
spinoff showcase Yesterday at 6:53 p.m.
What Could a Stranger Things Spinoff Be? Some helpful suggestions.
celebrity response Yesterday at 6:21 p.m.
Celebrities Respond to the Supreme Court’s Overturning of Roe v. Wade Celebrities including Viola Davis, Taylor Swift, and Michelle Obama respond to the Supreme Court’s decision.
its the industry baby Yesterday at 6:15 p.m.
What’s Up With Lil Nas X and BET? Lil Nas X was snubbed with zero nominations at the BET Awards.
overnights Yesterday at 5:36 p.m.
Evil Recap: Horny As Hell A demon in the sheet and a new cryptocurrency? This is literal hell.
exit interview Yesterday at 11:00 a.m.
Peter Strickland Wants the Work That Hacks Are Getting “I don’t see hack as a dirty word,” says the director of Flux Gourmet, an empathetic look at the cost of good art and the perils of human digestion.
By Rachel Handler
chat room Yesterday at 9:00 a.m.
David Hyde Pierce Almost Missed His Julia Moment The TV legend on playing opposite Sarah Lancashire and his ambivalence about that Frasier reboot.
the festival circuit June 25, 2022
Olivia Rodrigo Sang Lily Allen’s ‘F- - - You’ to the Supreme Court In response to the decision to overturn Roe v. Wade.
luk at tu! June 25, 2022
Julie Andrews Has a Favorite Minion It’s the one that says, “Hello!”
More Stories