What’s That Sound? In Ashley Fure’s Compositions, It Could Be Almost Anything. 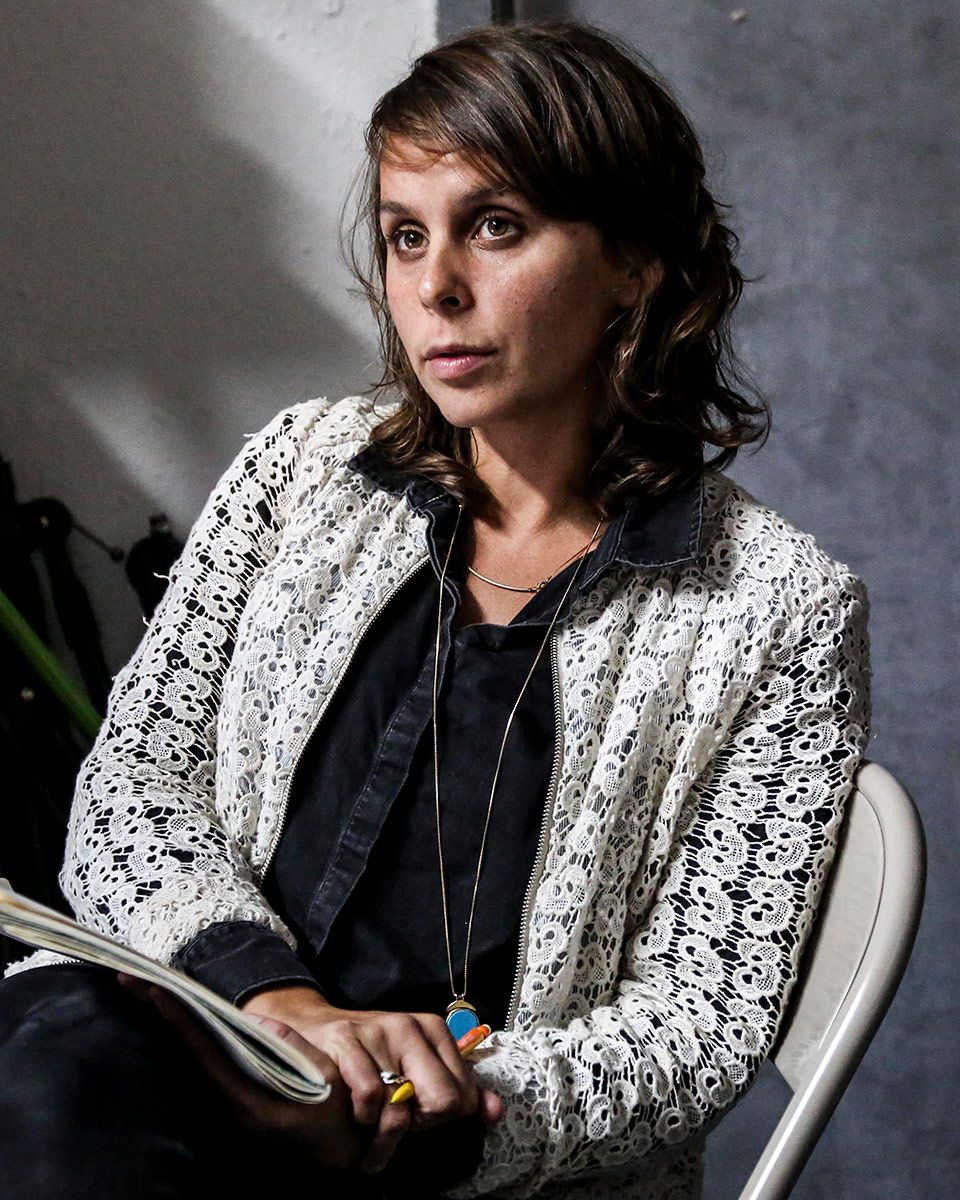 Imagine that you’re a young composer and one day you realize that you don’t much care for notes. Actually, you’re also kind of disappointed in instruments, pitch, melody, and rhythm. These ingredients — as fundamental to Western music as flour, water, and yeast are to bread — somehow don’t explain the wonder you feel at the sounding world, which is made of more mercurial stuff, all the scratchings, clangs, thumps, growls, and caws that fill our ears and that we lump under the unfair rubric of noise.

“Language fails when you get to complex timbres. You look at unstable complex waveforms and we call it a screech. But any two screeches are nothing alike,” says Ashley Fure, a composer who spent years struggling against her education and searching for the right technological tools before she learned to harness the beauty she heard around her. Take, for instance, the eerie profundo moan produced by an instrument of Fure’s invention in The Force of Things: An Opera for Objects, which will have its New York premiere August 6 at the Mostly Mozart Festival. Several dozen feet of aircraft cable are winched taut over a Styrofoam block. Plucked at one end, the tense braided steel sings like a giant’s double bass. The world is full of vibrations too high, low, and quiet to hear. Fure makes a few of them audible. In The Force of Things, hidden subwoofers arrayed around a room rumble undetectably, but their energy sets wires in motion, which shake and rustle a veil of paper drapery. “The objects progressively expose the audience to the revelation that everyone is entangled in the same sonic web,” she says. A butterfly in Brazil can cause a song to be heard in Manhattan.

Fure is no renegade. At 36, she’s accumulated a Ph.D. from Harvard, a backlog of commissions, and a backpack’s worth of honors that include the Rome Prize. In 2015, she joined the faculty at Dartmouth. Cementing her Establishment status, the New York Philharmonic’s new music director Jaap van Zweden will inaugurate his tenure in September with the premiere of her new orchestral score Filament. But she has succeeded within the system by demanding more of it than she was willing to concede. “From an early age, I wanted to make immersive, expansive multisensory … things. I didn’t have a word for them. They’re not operas. I didn’t want to work with text, and I wasn’t after characters, plot, or costumes. I wanted something that had the same potency but was more abstract. I was hungry for a more interesting ritual.”

Fure grew up in Marquette, Michigan, and formed a bond with her older brother Adam that only tightened with physical distance. When she was at college in Oberlin and he was studying architecture at UCLA, they spent hours on the telephone, sharing inspirations and intellectual frustrations. Ashley described a volatile, indeterminate sound world she had no access to except in her mind; Adam told her of theorists and philosophers whose work helped him see architecture as a speculative art. “He understood these strange visions I had,” Fure says. “I don’t know if it’s just because we’re siblings or because we were both feeling constricted by our disciplines.”

I meet Adam at Paper Mâché Monkey, a theatrical prop shop in Astoria that is fabricating the indoor environment he designed for The Force of Things. The sets, crinkly, translucent curtains suspended from the ceiling, enfold the audience, rustling and whispering. There is no luxury of distance. Adam and the show’s co-director César Alvarez examine every crumple and crease, and compare the properties of muslin, movie screen, and treated paper. “This looks like an alien material,” Alvarez says approvingly. He’s looking for just the right degree of weirdness, abstraction, and emotional charge to match their equivalents in Fure’s music.

These deliberations take place without her, since she’s in Rome, finishing up a year at the American Academy and frantically trying to finish Filament, the Philharmonic piece. Set high on the Janiculum hill, a brisk walk down to Trastevere, the Academy is the sort of place that encourages scholars and artists to do their work, and also makes it almost impossible. During the year, as long-fixed deadlines closed in, Fure spent time touring Rome’s early Christian basilicas with another Academy fellow, architectural historian Bissera Pentcheva, who got her thinking about the relationship between music and architecture in the Middle Ages. “She talks about the synesthetic qualities of cathedrals: the way they were designed to amplify the voice and simulate the spirit coming down from on high and swallowing all those individuals,” Fure says. “Imagine how candlelight played off the specks of gold in the eyes of the Virgin Mary, making them seem animate. I’m attuned to the immersive effects of these ancient spaces.”

It’s not the first time epiphany has gotten in the way of efficient creation. In 2010, when Fure was a graduate student at Harvard, she made the trip to New York to see the Drawing Center’s exhibition of drawings by the composer, architect, and relentless visionary Iannis Xenakis. The show included sketches for his Polytopes, wild, hyperambitious syntheses of music and architecture written for new buildings or ancient desert ruins. “I was so moved that I left that exhibition, took the Chinatown bus back up to Harvard, walked into my teacher’s office, and said I am never writing concert music again. But I did, of course.”

Fure had been through this cycle of desire, crisis, and breakthrough before. Already during her college years, Fure was trying to hack orchestral instruments, trying to coax musicians into copying the sonic range that her imagination produced so effortlessly. She hoped to build on a long tradition of “extended performance techniques” that went back several generations. In the 1960s, the Italian composer Luciano Berio deconstructed each instrument of the orchestra, plus the soprano voice, in a series of well-known Sequenzas that were rife with multiphonics, slaps on the cello body, written-out giggles, and oboe key clicks. To widen the range of weirdness proved hard.

“It would always turn into a blunt scratch,” she says. “That got debilitatingly frustrating. I almost just checked out. But then I got into the electronic-music studio. Now I could make those noises myself. I could bring stone or glass or a broken bike wheel into the studio and try different things and record for hours and hours.”

That, too, was hardly a new discovery. Musique concrète, assemblages of found and recorded sounds spliced together on tape, has existed since the 1940s. For Fure, though, manipulating noises electronically yields not a final product, but one step in the process that leads to live performance. She spends hours in a studio, obsessively recording a fan’s mutable whir, or slapping a baseball into a mitt, trying to locate each object’s sonic soul. Afterward she listens, over and over, to that catalogue of hums and pocks. “I’m selecting the ephemeral moments that had the most potent energy, the most harmonic or melodic interest.”

Once she has winnowed her stock of recorded sounds, she analyzes their waveforms on a computer screen, looking for patterns in the apparently anarchic complexity. “The sound may have a 47-note chord, but I don’t want all of those frequencies.” Working with the editing program Pro Tools, she distills harmonies from the static, sculpts the waveforms to bring physical reality in line with her imagination, then assembles all those hundreds of instants into a stream of what has by now been transmuted into music.

The endpoint of this tortured method is often a more or less written-out musical score: notes on paper, the very cage of convention that Fure hoped to bust out of. Like other composers entranced by nature’s sonic complexity—Messiaen transcribing bird calls, or John Luther Adams fixing the deep upwellings of the ocean—Fure faces the painful task of translating a sensory experience into symbolic notation for professional musicians to translate back into an experience that can be shared. “You lose a lot but hopefully if you get a player who can inject some of that volatility back into it, you gain a lot too. I’m always looking for this edge between chaos and control, between forces that overtake us and forces we have some influence on.”

A few weeks after our conversation, Fure emails to tell me that she has finished both her stint in Rome and the score for Filament. She’s on to Berlin and the next project. Filament opens notelessly, of course. A corps of singers distributed across the balconies whispers into handheld megaphones, sweeping the audience like acoustical spotlights. In the score, Fure explains the effect she wants with an instruction that is both literally and figuratively aspirational: A wave of white noise starts at the periphery of the space and quickly crests onstage, like the voices are thrusting life breath into the open mouths of the orchestra. Noise and music merge, indivisible.

*A version of this article appears in the August 6, 2018, issue of New York Magazine. Subscribe Now!

+Comments Leave a Comment
In Ashley Fure’s Music, Almost Anything Can Be an Instrument

now streaming 8:00 p.m.
New on Paramount+: January 2023 Teen Wolf: The Movie, Mayor of Kingstown season 2, Clue, and more.
rip 7:30 p.m.
Melinda Dillon, A Christmas Story’s Mom, Dead at 83 The actress received Oscar nominations for her roles in Close Encounters of the Third Kind and Absence of Malice.
possessions 5:20 p.m.
Austin Butler’s Elvis Voice, Awards-Season Sweetheart, Is Out of a Job A moment of silence for the bit.
overnights 5:00 p.m.
Dear Edward Recap: The Odd and Peculiar While the title character is one of the least interesting of the bunch, Connie Britton’s Dee Dee is absolutely stealing the show.
vulture sports 4:08 p.m.
The Music Fan’s Guide to Super Bowl LVII Plan your chip breaks wisely.
trailer mix 3:50 p.m.
Outer Banks Season 3 Will Have the Pogues Poguing Around Poguelandia The new trailer is just the start of the treasure hunt.
1.5x speed 3:44 p.m.
What Does Spotify Want From Podcasts Now? A closer look at a head-spinning week in the audio industry.
vulture lists 3:00 p.m.
Every M. Night Shyamalan Movie, Ranked Making sense of the director’s tricky career.
explainers 2:45 p.m.
What the Great Netflix Password Crackdown Means for You Let’s talk about it.
overnights 2:34 p.m.
Dear Edward Recap: Good Night, Stupid Everyone is adjusting to their new normal. “Normal” being excruciating and debilitating grief.
grammys 2023 2:34 p.m.
Beyoncé(’s Husband) to Perform at the 2023 Grammys Alongside DJ Khaled, Rick Ross, Lil Wayne, John Legend, and Fridayy.
close read 1:50 p.m.
The 1619 Project’s Standout Episode Resonates With Infuriating Timeliness A six-episode adaptation of the sprawling New York Times effort can’t help but feel scattered, but “Capitalism” is honed to a sharply incisive point.
vulture asks 1:32 p.m.
What Reality-TV Stars Should Star in The Traitors Season Two? From Monet X Change to Henry Louis Gates Jr., Vulture has a veritable smorgasbord of opinions.
endings 1:21 p.m.
Even Nicolas Winding Refn Doesn’t Know What Copenhagen Cowboy’s Ending Means “Sometimes getting everything is not the right answer.”
By Roxana Hadadi
sundance 2023 12:55 p.m.
A Complete List of Films Sold at Sundance 2023 (and Their Price Tags) Sony Pictures Classics picked up mother-daughter drama The Persian Version.
no bars 12:02 p.m.
Jafar Panahi Has Been Released From Prison Following Hunger Strike The Iranian filmmaker protested his wrongful detention for 48 hours.
vulture 10x10 12:00 p.m.
The Retreat Puzzle 27-Across, Four Letters: Color favored by Elle Woods.
overnights 12:00 p.m.
The Legend of Vox Machina Recap: Actually, Split the Party The Legend of Vox Machina continues to smartly deviate from what happened in Critical Role.
now streaming 11:54 a.m.
The 6 Best New Movies and TV Shows to Watch This Weekend No, we didn’t forget the Grammys.
vulture sports 11:39 a.m.
Super Bowl LVII Commercials Kick Off Early The real main event.
More Stories