Pretending to be tourists with the BlacKkKlansman star. 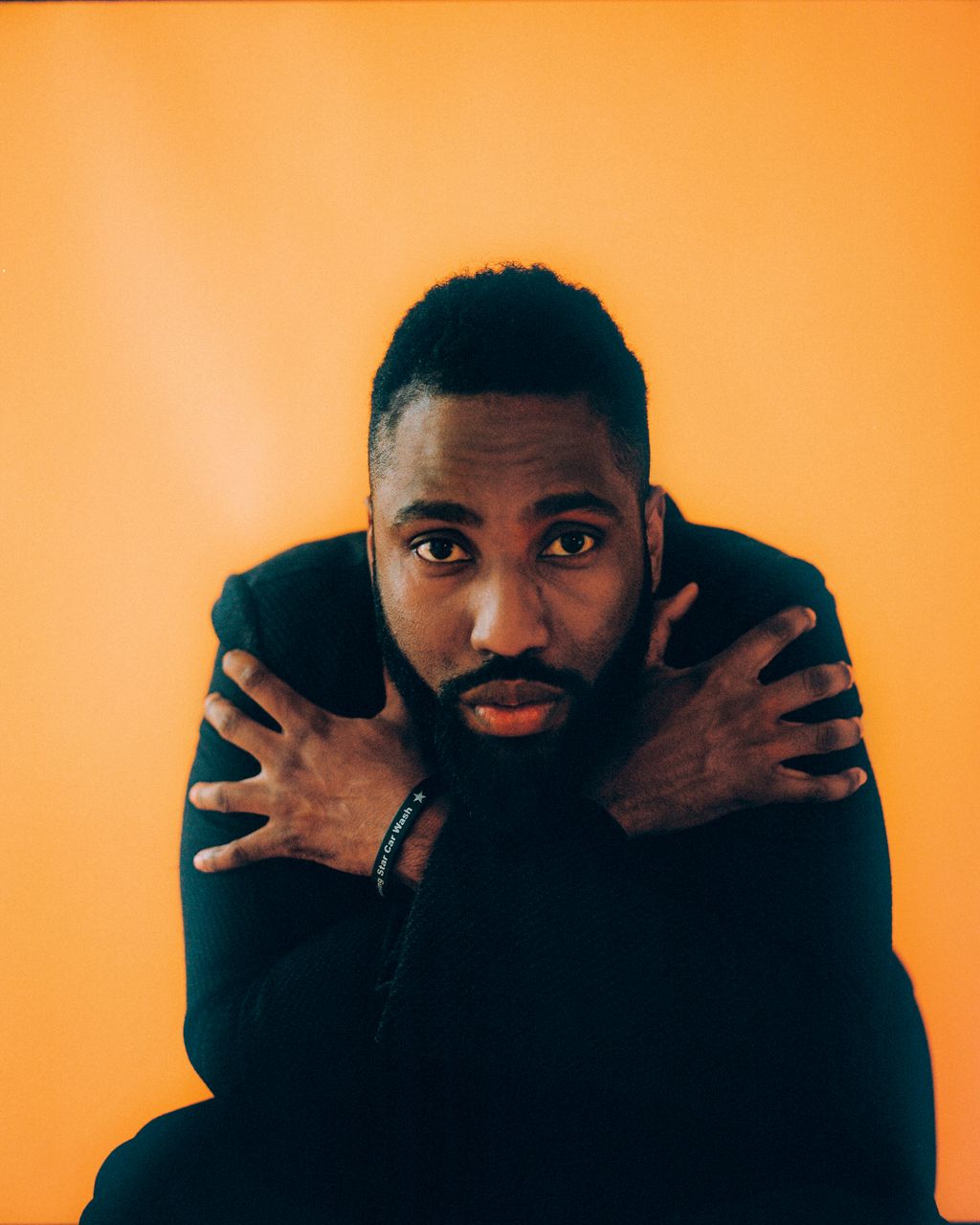 John David Washington is spinning a story about his father. He has a lot of them, but this one, from when he was 4 or 5, is really lodged in there. “He did Glory, and I remember being on set for the big scene when he dies,” he says, telling it the way you only do with formative childhood memories — hazily, with dicey detail. He recalls sitting in video village with his mom when his dad came “out of the darkness and smoke, on a hill, in a blue suit. He looks at me and says: ‘Son, you want to come down here, check out the set?’ ” For whatever reason, presumably to protect him from watching his dad die take after take, his mom said, “No.” But it didn’t matter; something about that experience made Washington want to be an actor.

It’s probably clear by now, as Washington has spent his life reluctantly admitting, the father in his story is Denzel Washington. I feel bad. Because once you learn who his dad is, it’s impossible not to spend several minutes trying to find the Denzel in his face. In addition to examining precisely how tight his white polo shirt is and how well groomed his luxuriously thick beard is, I try to see if he has his dad’s megawatt smile, or if his milk-chocolate-brown eyes are like his dad’s. Maybe it’s in the way he carries his five-foot-nine frame? Eventually I tell him, “You look nothing like your dad.” He seems grateful to hear that.

Washington and I are standing in front of a pedicab in midtown, with the expectation that we’ll sit on the small vinyl seat together. He’s in the middle of the press cycle for BlacKkKlansman, Spike Lee’s new movie, so we’ll be talking in transit from his Today interview to a photo shoot. The pedicab? Well, that’s just to inject some adventure into the mode of transportation. There are only a few types of people who get excited about the pedicab experience, among them tourists and people who have recently moved to New York and still find the subway charming. Washington grew up in Los Angeles, and when I ask him why he chose New York as his home, he booms, “Brooklyn, babay babay!” with remarkable enthusiasm. So! We get into the pedicab, despite a rain forecast and gathering clouds and the availability of taxis with doors.

Washington, 34, attempted to renounce the family trade earlier in life. He’d had only one acting role — at age 7 — before he gave it all up: “Student in Harlem Classroom,” in Lee’s Malcolm X, in which his father played the titular role. (John David had one line: “I am Malcolm X.”) Washington’s whole narrative feels like it’s shaped by a Psych 101 type of rebellion. Instead of following his father into acting, he tried to go his own way, attempting a career in professional football. “My father couldn’t help me in this sport,” he reasons. He wasn’t lying. After playing college ball at Morehouse, he made the practice squad for the St. Louis Rams, sustained five concussions, and rode the bench for two years before the general manager let him go. He kept trying and, at 28, was getting ready to try out for the Giants when a torn Achilles’ heel finally knocked him off that path and onto his current one.

Since he landed his first role (“After ten auditions!” he says) as Ricky Jerret opposite Dwayne Johnson on HBO’s NFL dramedy Ballers, Washington has enjoyed the comfortable level of recognition where every 12th person on the street stops to give him a dap. With the lead in BlacKkKlansman, as Ron Stallworth, a real black Colorado Springs cop who infiltrated a local Ku Klux Klan chapter in the late ’70s, he’s now becoming face-on-the-movie-poster famous. BlacKkKlansman received a standing ovation at Cannes and won the Grand Prix, much to Washington’s surprise. “I was prepared for the worst, like booing and fruit-throwing. Remember that episode of Entourage,” he asks, “where Vince premiered his movie at Cannes. I was watching that episode like every day of the week leading up to [the festival]. Just trying to prepare myself for the worst.”

We rattle along, trying to decide if forcefully hitting potholes is fun. Washington makes up his mind quickly. “This is my first time in a pedicab! This is exciting. A little dangerous. I feel, like, so exposed,” he exclaims. It is for sure going to rain, but our driver, Kyah, swears it won’t. He’s been driving for 11 years, he reassures us. He knows. Ten blocks later, big chubby drops start plunking down, wetting Washington’s pristine white polo, threatening (promising) to turn this into a one-man wet-T-shirt contest. Washington calls out, “Eleven years, man! Eleven years!”

Kyah starts making a fuss about zipping us up under a tarp. Washington waves him off. “It’s just water. It’s not like it’s raining soda.” He shakes his head. “Oh, man, I love root beer, though. I’m all about it. I’d have a whole bunch of buckets set up. A&W, have you ever had A&W?” For a fleeting moment, his voice is full-on Denzel. Like imagine if Denzel’s epic Man on Fire monologue was about the joy of having an A&W root beer with steak or a taco.

I was like, ‘Dang, this is how we look out here?’ Like, can we get a Kumbaya?

There wasn’t an audition or a negotiation or even an offer to star in BlacKkKlansman, says Washington. It was basically a demand. Washington still isn’t sure what Lee saw in him. “You’ll have to ask Spike,” he says, shrugging. He is so polite, though, he is almost preordained to play good-cop roles. It’s hard to imagine him using a bad word. “Spike trusted me. He didn’t correct me, he didn’t ask me to do it a certain way.” In fact, one of the lines he partially improvised on set, “With the right white man, we could do anything,” ended up being in the movie. “I still can’t believe they’re using that!”

Suddenly, the pedicab jerks across four lanes of traffic and Washington’s body is thrown onto mine. “See, these turns make me nervous,” he says. For the first time he looks terrified instead of grinning like a child on a ride at Universal Studios. “I don’t want to die!” he jokes. Fortunately, the threat of death is over, for now. We arrive at the photo studio and settle into white leather chairs in the waiting room.

This conversation can’t just be root beer and pedicabs and teamwork, as it’s impossible to see BlacKkKlansman and not think about cops and racism and how history isn’t really history. Near the film’s end, a shot of Klansmen burning a cross blends into footage from the Charlottesville white-supremacist marches. In another scene, Harry Belafonte recounts the true story of Jesse Washington, a 17-year-old boy who was lynched in Waco, Texas, in 1916. Belafonte’s scene was Washington’s favorite day on set. Men wore suits, and women dressed up for the occasion. Washington wasn’t even on the call list, but he put on his suit and went to listen.

When the movie premiered at Cannes, Washington felt lots of things, most of them positive, but he recalls being so embarrassed for our country. “I was like, Dang, this is how we look out here? Oh, man. We’ve got to get it together, like, can we get a Kumbaya?” I ask him what thought came up for him about being black.

“Of course I’ve felt racism,” he says, hunching his shoulders. He doesn’t want to go into detail, but he mentions other students at his private school, playing side-by-side with men who supported Trump, locker-room rhetoric he had to ignore. He spent summers with his family in North Carolina, where he’d been called “the N-word,” but the conversation quickly shifts, and soon we’re talking about his Afro in the movie — a perfect orb of picked-out hair.

“Oh, talking about private school,” he jumps in. “Man, I had cornrows, and when I picked ’em out, certain people that didn’t look like me always wanted to touch ’em,” he says, shaking his head. “One time, I just said, ‘Yo, hell no.’ ” He laughs. It was the first time he’d cursed all day.

*This article appears in the August 6, 2018, issue of New York Magazine. Subscribe Now!