Brought to you by

The Favourite is not the favorite to win the Oscar for Best Picture at the upcoming Academy Awards, but if you have a hunch, you can bet it at +1,110 odds right now at the FanDuel Sportsbook in New Jersey. Meaning a $10 wager would return $110 in profit if the Olivia Colman–led cast walks away with the hardware. The actual betting favorite? Roma, currently listed at -340, meaning a winning $10 bet would pay $13.00, $3.00 plus the $10 investment back.

It’s taken almost a century, but the 91st presentation of the Academy Awards on February 24 will mark the very first time that licensed U.S. sportsbooks will have a green light from state regulators to offer wagering on the Oscars, or any entertainment awards. This would not be possible if not for another U.S. institution: the United States Supreme Court, which in May 2018 decided in favor of New Jersey in the case Murphy v. NCAA, ruling on Tenth Amendment grounds that the federal ban on full-fledged sports betting outside Nevada unconstitutionally commandeered states.

One month later, New Jersey’s legal sports-betting industry was born, making way for now ten land-based sportsbooks and even more online. In 2018 from mid-June to the end of 2018, bettors placed a combined $1.25 billion at licensed sportsbooks on contests from college football to cricket. Regulations require that you must be physically present in the Garden State to make a wager on a mobile device or in person at a sportsbook. Residents of other states will have to wait until next year or longer, or make a round trip into Jersey to put down bets, then head back home over the GWB or through the Lincoln Tunnel, as thousands of New Yorkers did during the football season (believe it or not).

For now, this new betting frontier in New Jersey opens another entertainment avenue, and potential new patrons for the sportsbooks among those who focus on the silver screen, not screen passes.

“The Oscars presents an exciting opportunity for us to expand our offerings for current customers and reach potential customers who may not be interested in sports but are interested in Hollywood,” a FanDuel Sportsbook spokesperson told Vulture. “These offerings are all about adding a bit of fun to an event and we’re glad to be offering this to our customers.”

Those offerings, and the odds, vary from sportsbook to sportsbook. DraftKings Sportsbook right now has only posted odds for Best Picture, while FanDuel and MGM’s platforms include markets for all major categories, including Best Film Editing, which appears to be up for grabs with The Favourite actually the favorite as of this writing at +105, while the oddsmakers put Vice close behind at +160 (risk $10 to win $16) and Green Book as the category’s long shot at +1,800.

Long popular in Europe and offshore, but off-limits in the U.S.

Betting on the Oscars, whether sportsbook-style wagers or pools at watch parties, is certainly not a novel idea. European bookmakers and offshore sportsbooks operating in black and gray markets, but servicing millions of U.S.-based bettors, have offered these betting markets for years.

Nevada regulators recently reconsidered their prohibition on entertainment wagering, but have not yet pulled back the curtains, citing integrity concerns. Foremost, the potential for abuse through inside information. Award winners are indeed predetermined and thus information, however closely guarded, is known to some.

But regulators for New Jersey’s nascent market, citing numerous requests from the sportsbook operators, advised licensees in late January that “after reviewing the relevant information on integrity issues,” bookmakers would be allowed to offer Oscars betting. The sportsbooks must tell the Division of Gaming Enforcement what wagers they plan to offer, and what limits they intend to place on bettors.

Why limits? Because low betting limits, or a cap on the amount one person (or account) may wager, or win, is a guard against potential abuse. Would anyone share confidential information, risking their reputation or career, for $500 or $1,000, or even $5,000 if they spread their action around town, which might get sniffed out?

Among the New Jersey sportsbooks offering Oscars betting is the Australia-headquartered outfit PointsBet.

Seven additional jurisdictions have legalized, or preemptively legalized and launched state-licensed sportsbooks, since the high court ruled: Arkansas; Delaware; Mississippi; Pennsylvania; Rhode Island; Washington, D.C.; and West Virginia, while lawmakers in nearly two dozen more are kicking around legislation. But so far, New Jersey is the only one to give the nod to Oscars betting.

Bookmakers and bettors alike gain more and better information about who will hoist the Oscars as February 24 approaches. One key indicator is the British Academy of Film and Television Arts Awards (BAFTA), which wrapped on Sunday.

The FanDuel Sportsbook trading team — the folks who set lines, move them as necessary, and manage risk overall — haven’t made much adjustment since first posting the Oscars odds, and measuring initial betting action. That may change after Sunday’s BAFTA Awards. The FanDuel spokesperson said, “These English awards could be a sneak peek into the Oscar winners.”

Like the BAFTA Awards, the Screen Actors Guild Awards also are regarded as somewhat if not highly predictive of Academy Award results.

“As in most years, the Screen Actors Guild Awards are hugely useful for predicting the Oscars,” said PointsBet’s Aitken. “In 2014, Matthew McConaughey was a long shot for the Best Actor Oscar for his role in Dallas Buyers Club, but after his SAG win he went from +400 to -400 odds — and won the Oscar.”

So people who have already put down a bet may have gotten good value, or may now know they’re holding losing wagers. Prior to the BAFTA Awards, Roma was -170 to win Best Picture. But after Roma took home Best Film at the BAFTA Awards, its price halved at FanDuel to -340.

Art is subjective and films pull at heartstrings, two factors that bookmakers bake into the odds. This year, at least one bookmaker is expecting some emotion-driven dollars.

“We expect there to be a lot of sentimental money this year for A Star Is Born across all the main categories,” Aitken said. “Although we don’t expect it to take home one of the big six awards, it looks like it’s as close to certainty as you can get for Best Original Song with “Shallow.” 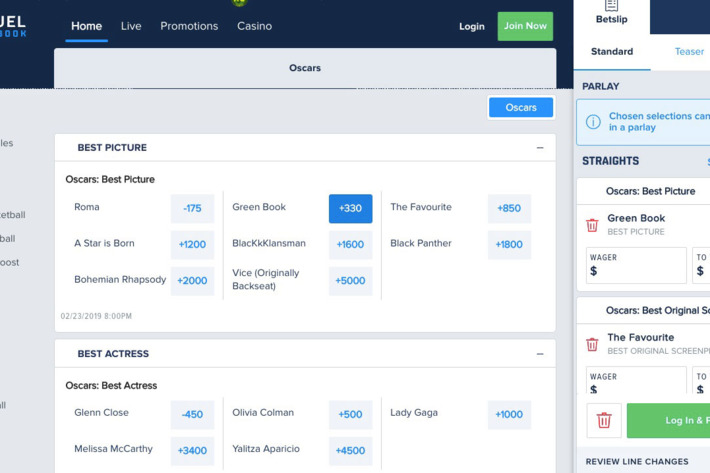 If you think Jennifer Hudson has a fighting chance with “I’ll Fight” from RBG, which she’ll be performing live, you can put down $10 to win $60 at its current +600 odds.

While “Shallow” is basically a stone-cold lock, “there’s a lot of ‘short favorites’ in the main categories,” Aitken explained, meaning they’re favored, but not by much. “That’s true for Roma (Best Picture); Rami Malek, Bohemian Rhapsody (Best Actor); Glenn Close, The Wife (Best Actress); and Regina King, If Beale Street Could Talk (Best Supporting Actress),” all priced in the coin-flip range.

As the Oscars draw nearer, if you intend to put down a wager, it’s best to do some homework, known in sports-betting parlance as “handicapping.” For starters, watch the films. Check a credible prognosticator such as FiveThirtyEight, which brings a mathematical approach to its predictions. Of course, follow Vulture’s coverage, and you’ll probably also want to follow Major League Baseball pitcher and film aficionado John Axford, who in 2014 went a perfect 18-for-18 with his predictions and a stellar 18-for-24 last year.

The New Jersey sportsbooks probably won’t garner millions in wagers this Oscars season or much revenue from it, largely due to the low limits, but it’s a win-win for sportsbooks seeking to engage new customers and for folks looking to profit from their Academy Awards acumen.

“The Oscars, like other entertainment markets, attract an equal share of serious and casual bettors — both male and female,” said Aitken. “It is a very light and fun way to spice up a viewing party for the event given everyone has an opinion on what film or performance was the best.”

Brett Smiley, once upon a time an overnight scribe for Intelligencer and Vulture, is the editor-in-chief of Sports Handle, a website covering the U.S. sports-betting industry. You can follow him on Twitter @brettsmiley.

sundance 2020 26 mins ago
Yes, Olivia Wilde Thinks Greta Gerwig Deserves a Best Director Nomination After the Sundance premiere of her Margaret Qualley-starring short film, the actress talks Oscars, Booksmart, and the Richard Jewell controversy.
grammys 2020 9:00 p.m.
BTS, Camila Cabello and More to Perform at the 2020 Grammys The Grammys are coming up on January 26, if you haven’t heard.
By Zoe Haylock
trailer mix 8:22 p.m.
Nicole Kidman Is Here To Get Undone In HBO’s The Undoing Trailer The limited-run series that asks: “What if every character on Big Little Lies was distilled down into one Nicole Kidman?”
live action 8:20 p.m.
Following Lion King, Disney’s Next Nature Doc Will Be ‘Live-Action’ Bambi Remake It’ll be just like you’re actually there! In the forest! With Bambi and his mom!
overnights 8:00 p.m.
Chilling Adventures of Sabrina Recap: Finders Keepers This season finally finds its groove and reaffirms its admirable commitment to male near nudity.
creature features 7:27 p.m.
Anaconda Will Rise Again With A ‘Reimagined’ New Movie Unfortunately, Jennifer Lopez probably won’t be in this version.
quick bites 6:49 p.m.
Chance The Rapper Is Now Hosting Quibi Punk’d The MTV prank show is coming back.
grammys 2020 5:27 p.m.
Former Grammys Darling Taylor Swift Snubs the Grammys She wants to be excluded from this narrative.
now streaming 5:15 p.m.
The 30 Best Action Movies on Netflix Right Now Triple Frontier, Snowpiercer, The Matrix, and more.
the law 5:11 p.m.
Rosie Perez Backs Up Annabella Sciorra’s Rape Claim in Weinstein Trial Testimony “She told me that it was, in fact, Harvey Weinstein that raped her.”
the gold rush 4:30 p.m.
This Oscars Season, I’d Like to Cancel Those FYC Books About Movies I’m talking about the enormous coffee-table tomes no apartment-dwelling film critic ever asked for.
explainers 4:30 p.m.
All Hell Has Broken Loose Within the Grammys The abrupt dismissal of Recording Academy CEO Deborah Dugan could become one of the biggest stories in the music industry since the Me Too era began.
vulture lists 4:00 p.m.
Michael Bay’s 18 Best Action-Movie Scenes Breaking down the director’s penchant for explosions, Hummers, and American flags.
close reads 4:00 p.m.
How Rage Cagey Is the New Nicolas Cage Movie Color Out of Space? Let’s Discuss. What follows can only be described as the indiscriminate slaughter of fruit.
now streaming 3:51 p.m.
The 40 Best Horror Movies on Hulu Right Now From Annihilation to 28 Weeks Later to Tragedy Girls.
grammys 2020 3:49 p.m.
How to Watch the Grammy Awards Sunday Night So you don’t miss a single nanosecond of drama.
a long talk 2:27 p.m.
The Witcher Showrunner Looks Ahead to Season Two Lauren Schmidt Hissrich reflects on fans’ reactions to the Netflix hit and its multiple timelines, and how things will change next season.
crime 2:09 p.m.
YG Arrested for Robbery Ahead of Nipsey Hussle Grammys Tribute The police raided the rapper’s home early Friday morning.
going solo 1:34 p.m.
Hayley Williams’s Solo Debut Was Worth the 15-Year Wait I would’ve guessed the Paramore front woman’s first solo single would be a full-tilt pop-radio assault. I’m happy I was wrong.
residencies 1:00 p.m.
Married Men Head to Las Vegas for Long-Term Job Opportunity But … will the wives be there?
More Stories