Now that the Xanax-popping, neurotic older cousin of Pretty Little Liars, a.k.a. The Perfectionists, has hit its stride on Freeform, fans of the original series are surely inclined to search for all of the Rosewood references and Easter eggs lying around in this new university setting. Two of its wildest leads are back, after all! Well, spinoffs can be both a blessing and a curse: While there have been a few callbacks to the good ol’ PLL days, they’re on the infrequent side, as the show continues to push forward in unraveling the conspiracy surrounding a student’s murder. Still, Vulture will be compiling all of these “A”-mazing references for the rest of the season. Enjoy!

Mona’s Parisian adventure ended … not with a bang

One of the last shots we see in the PLL series finale was our girl Mona finally fulfilling her enslaver destiny: holding Mary and Alex Drake captive in an underground Parisian dollhouse dungeon with a hot homme by her side. J’adore! So, it’s a bit weird to see her reemerge in the Pacific Northwest with some “I lost my mojo” reasoning, which was that the Drakes managed to échapper on outta there. “That was great for awhile,” she explained to Alison. “But eventually the reasons I was there … escaped me.”

Alison and Emily are in a bit of a rough patch

You might recall how Alison was artificially inseminated with Emily’s eggs by “A” on PLL — yeah, that was a lot — with Alison choosing to continue the pregnancy. She later gave birth to twin girls, and we last saw the ladies become engaged with the intention of raising their family in Rosewood. In the years since, things haven’t remained stable between the two, which prompts Alison to take the job out West. “Emily loves me but just can’t get past the past,” she told Mona. “We are [in love], but we’re not. It always comes back to trust. But I’m giving up.”

There are also photos of the family peppered around Alison’s new home, although they’re a bit hard to see: 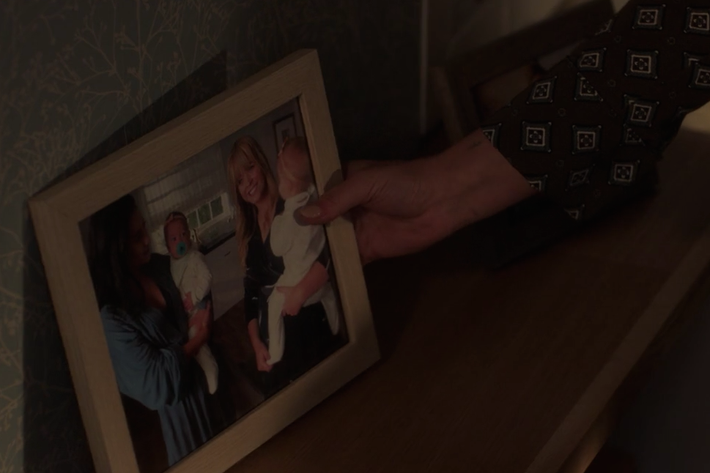 Spencer and Toby got married!

To keep herself in a good headspace and not, uh, prone to her old black-hoodie ways, Mona gives her pal Hanna a call to gab about their lives. As we know from PLL’s finale, Hanna was pregnant with Caleb’s baby, and their phone conversation confirmed the child is happy and healthy. But on to more important matters: Spencer is now Mrs. Cavanaugh, bitch! “Spencer and Toby eloped? Even you didn’t know?” Mona squealed. “Well, are they registered somewhere? Of course I want to get them a gift.”

da vinki?! 24 mins ago
The Da Vinki Twins Finally Saw the Mona Lisa But does the Mona Lisa see them right back?
palme d’or 4:50 p.m.
Triangle of Sadness Takes Home Pepto and Palme d’Or at Cannes Film Festival Director Ruben Östlund’s second Golden Leaf award.
overnights 3:56 p.m.
Stranger Things Midseason-Finale Recap: Escape Plans The midseason finale provides big satisfying answers while also leaving us with several questions to mull over while we wait for Volume 2.
vulture investigates 10:00 a.m.
Where Is Manny Jacinto in Top Gun: Maverick? Does Tom Cruise hate Jake Jortles? An investigation.
movie review 9:00 a.m.
Vengeance Is Mine, a Blast from an Unknown Past, Arrives in Theaters Originally made in 1984, Michael Roemer’s riveting family drama is finally getting a theatrical release.
By Bilge Ebiri
cannes 2022 7:00 a.m.
The Best Movies at Cannes Broke Through the Bleakness The film festival was full of doomed protagonists, graphic murders, and children driven to crime. But a handful of movies were hopeful, too.
that was quick Yesterday at 11:52 p.m.
Matthew Morrison Is No Longer Judging So You Think You Can Dance Because he “did not follow competition production protocols,” whatever that means.
tragedy Yesterday at 9:53 p.m.
Obi-Wan Kenobi Adds Content Warning in Light of Texas School Shooting After Stranger Things recently put a similar message on the first episode of its fourth season.
gilead girl Yesterday at 8:22 p.m.
Alexis Bledel Won’t Appear in Season 5 of Hulu Reality Show Wait, no, The Handmaid’s Tale is supposed to be a dystopian drama.
overnights Yesterday at 7:36 p.m.
RuPaul’s Drag Race All Stars Recap: Fortune Favors the Queen Queens are scheming and plotting.
summer preview Yesterday at 6:56 p.m.
17 Books We Can’t Wait to Read This Summer With new releases from Akwaeke Emezi, Ottessa Moshfegh, Mecca Jamilah Sullivan, Mohsin Hamid, and more.
By
cinephile tea Yesterday at 6:17 p.m.
Viggo Mortensen Accuses Pedro Almodóvar of Being Bitter, Almodóvar Responds What is Cannes Film Festival without someone starting drama for no reason.
survey says Yesterday at 5:31 p.m.
What Do Comedians Think of (the Non-Joke Parts of) Stand-up Specials? Here are insights from 39 of them.
By Hershal Pandya
explainers Yesterday at 5:27 p.m.
The Bullying Allegations at the Center of HYBE’s Next Big K-Pop Group, Explained After Korean forums accused Kim Garam of bullying, the internet was aflame.
overnights Yesterday at 4:12 p.m.
Stranger Things Recap: The Shire Is on Fire We (mostly) love Steve getting his big hero moment in the penultimate episode of Volume 1.
follow friday Yesterday at 4:06 p.m.
Michael Bonfiglio Wants to Tell You a Story We chatted with the director about the art of the stand-up comedy special — and, naturally, hummingbirds.
now streaming Yesterday at 4:00 p.m.
What’s Leaving Netflix: June 2022 Lady Bird, Criminal Minds, My Fair Lady, and more.
overnights Yesterday at 2:47 p.m.
Obi-Wan Kenobi Recap: Second Chances What feels a bit like Taken in space pivots to “John Wick: Chapter 2 in space” territory — and it works!
still learning Yesterday at 1:58 p.m.
Isaiah Rashad Comes Out as ‘Sexually Fluid’ in First Interview About Sex Tape “I’m not in full control of, when I walk into a room, of who I’m attracted to,” he told Joe Budden.
overnights Yesterday at 1:31 p.m.
Stranger Things Recap: This Old House We get a little haunted-house movie in the middle of Stranger Things!
More Stories