He was a good boy. Photo: Helen Sloan/HBO

Soon after Jon Snow emerged victorious over Ramsay Bolton in the so-called Battle of the Bastards, toward the end of Game of Thrones’ sixth season, the episode’s director, Miguel Sapochnik, spoke to Business Insider to address the most pressing question unanswered after the clash: Where was Ghost, the deadly white direwolf Jon had taken care of since it was a pup? “Ghost was there in spades originally, but it’s also an incredibly time-consuming and expensive character to bring to life,” he explained. “Ultimately we had to choose between Wun-Wun and the direwolf, so the dog bit the dust.”

This seemed an incomprehensible explanation to most fans of the series. Game of Thrones, after all, isn’t just an effects-heavy show — it’s the gold standard for visual effects on television, period. But even on a program where city-toppling infernos, blimp-size dragons, and buckets of blood and gore are regular sights — sometimes within the same 90-minute window, as we saw in penultimate episode “The Bells” — bringing to life naturalistic, plausible-looking direwolves is too difficult to do more than once or twice every season.

It wasn’t only in the Battle of the Bastards that viewers felt Ghost’s presence curtailed. In the fourth episode of this eighth and final season, before Jon Snow ventured south for an ill-fated encounter with a power-mad Daenerys and a whole lot of dragon fire, he bid tender farewells to several friends, allies, well-wishers, and confidants whose services were no longer required for the remainder of the series. He said good-bye to sister Sansa Stark; he warmly embraced Samwell Tarly; he exchanged words of abiding admiration with Tormund Giantsbane. And then he gave away Ghost, his beloved direwolf companion, without so much as a pat on the head or a word of thanks on his way out the gates.

Fans were rightly appalled. Like Sapochnik before him, episode director David Nutter was called on to answer their confusion. But he gave an explanation rooted in emotion rather than technical challenges, telling HuffPost that “keeping Ghost off to the side” and out of frame with his lifelong companion “played out better,” insisting that as shot, Jon Snow “has this moment with Ghost” that is “very, very powerful.”

Whether you accept this explanation or suspect the whole truth may lie closer to Sapochnik’s more logistical reasoning, it’s clear that as Game of Thrones has gone on, its commitment to direwolves has diminished. Last season Ghost didn’t appear at all, despite ostensibly being around if anyone needed him; the other Stark wolves have been steadily killed off, and the only other survivor, Nymeria, was summarily shooed away after a brief exchange with Arya in the Riverlands.

The sidelining of Ghost in particular is one of the show’s more conspicuous departures from George R.R. Martin’s source material. Martin is certainly fond of prophecies, and A Song of Ice and Fire is loaded with auguries, divinations, and various other grace notes and symbols whose meanings resonate throughout the series. Accordingly, the direwolves have been hugely important to the novels, and readers generally feel Martin has more planned for them than D.B. Weiss and David Benioff have exploited on the screen.

It’s not that the showrunners have anything against the direwolves or feel compelled to reduce their presence because they’re uninteresting. The direwolves have been scaled back for a much simpler reason, alluded to by Sapochnik: They’re really, really hard to shoot. Direwolves are bloodthirsty, oversize creatures that for the most part hang around our heroes looking graceful and calm, which means that integrating them into scenes convincingly is one of the toughest demands on VFX teams already accustomed to working at the top of their game.

The problem isn’t that the direwolves are a state-of-the-art effect whose complicated creation strains the limitations of budget or technology. In fact it’s the opposite: Unlike most of the supernatural wonders that grace the screen spectacularly episode after episode, the direwolves are strictly, even stubbornly old-fashioned, created in a painstaking, but always visually impressive, way.

Kirk Brillon, a visual-effects supervisor at Toronto’s Spin VFX, has been involved in over 200 VFX shots on Game of Thrones, starting on the second season, and has worked on many of the show’s direwolf shots. He says the way the Thrones producers approach the direwolves, conceptually and logistically, sets “an extremely high bar for quality” compared to other kinds of effects — “almost as if they were testing themselves to prove they could do it,” he says.

This may surprise some viewers, but the wolves aren’t ground-up digital creations. They are real wolves, shot on a green screen and later superimposed using digital compositing. Compositing is a less common process on shows like Thrones, used only for key characters and objects, including the giants (who are likewise green-screened and enlarged to bigger-than-life proportions) and the wall at Castle Black, for which Brillon and his team created the Wildling ascent in season three’s “The Climb.” Unlike Dany’s dragons, which are of course entirely CGI, such effects are “grounded in reality,” Brillon says, and incorporated seamlessly after the fact. “It’s an old-school method, the way they do it,” he explains. “And it absolutely looks better because they do it that way.”

Direwolf compositing can be more complicated and time-consuming, not so much because of the complexity of the VFX work as the demands made in advance, in the middle of the production. On set, scenes have to be precisely blocked and choreographed to account for where the wolves will be in the final product; the movement of the camera has to be tracked with a special rig so that it can be replicated exactly, down to the millimeter, when it’s time to shoot the wolf in front of a green screen. The slightest variation can be a headache to match in postproduction — and they’re dealing with live wolves, which are not exactly the most obedient screen actors. Then the wolves themselves have to be shot twice over, the second time with different lenses on the cameras, to make them look bigger than their surroundings without it seeming obvious that they’ve been digitally enlarged.

The mind reels, considering the particulars involved. The wolves have to be matched into the scene so that they don’t look like they’ve been shot several thousand miles apart; the colors have to be aligned to the slightest degree, an even more daunting task given the sheen of a wolf’s fur. (White wolves like Ghost are even harder to color, owing to the way the light catches on their coats.) They’ve taken to adding fake cedar mulch to the floor around the wolves to make it easier to match to the forest settings on the back end. 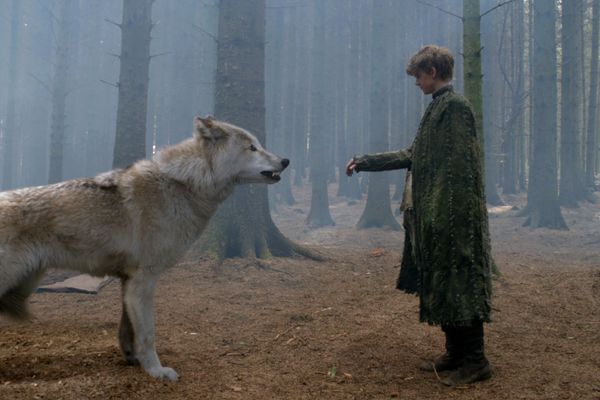 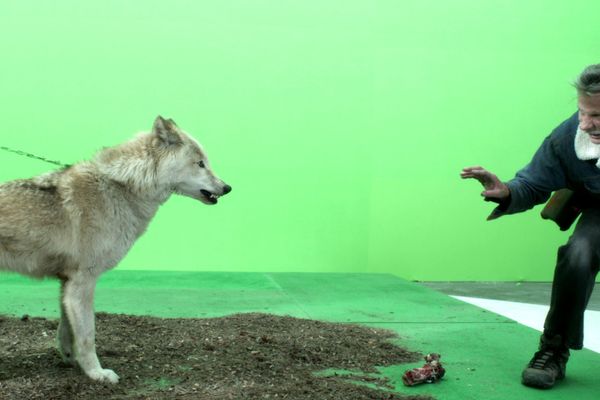 It can be hard enough to have a wolf wander into a stand-alone Winterfell shot. Having him actually interact with the characters is another story. In the third season, for a shot where Jojen Reed reaches out and touches Summer, the direwolf formerly owned by Bran Stark, the team developed a whole range of “lineup tricks” to keep Jojen and the wolf looking like they were actually sharing the same physical space — even though in reality they never even saw each other. “They shot him on a fake floor, and they shot the wolf on a fake floor, and they kept everything exactly in position so the eyelines match,” explains Steve Ramone, a Spin VFX supervisor who’s worked on 3-D CG effects, such as ravens and crowd shots of the Unsullied army, and who worked on this shot. “You need it to actually look like the kid’s looking in the wolf’s eyes, and that’s hard.”

This is possible at all, Ramone says, because the producers of the show “went to a lot of effort to make things easier on the comp side,” taking it “very seriously on set.” The amount of work the directors put into staging these shots — what’s called the “pre-vis” work, including measuring the heights of the actors and the wolves and computing “a lot of mathematics” to get it all just right — is not always typical in the industry, and Ramone says it’s “a relief” to receive materials made at such a high standard from effect to effect.

They don’t go to such lengths just to make the lives of the VFX teams easier, obviously. They do it because, as Ramone and Brillon both insist, this slower, more labor-intensive approach to shooting direwolves makes the finished product look that much more lifelike.

“The thing about filming wolves and adding them in compositing, instead of just doing it digitally, is that it just looks better no matter what you do,” Brillon says. “Grounding it in the real is way better for any effects shot, period.”

On the other hand, once you’ve committed to shooting direwolves the old-school, labor-intensive way, you can’t switch back when it’s no longer convenient — which might excuse the producers for forcing the wolves into early onscreen retirement.

the gold rush 7:40 p.m.
Oscars to Bring You ‘Husavik’ in Húsavík, Best Song Noms in Pre-Show All five Best Original Song nominees will be performed during a pre-Academy Awards special.
follow friday 5:59 p.m.
Julia Young Was the Most Popular Girl at Sleepaway Camp We chatted it up with the comedian on Instagram Live today.
these reboots are manolos 5:33 p.m.
John Corbett Swears on Chanel Aidan Is in HBO Max’s Sex and the City Reboot SJP has neither confirmed nor denied this.
the industry 5:06 p.m.
Ryan Coogler Says Black Panther 2 Production Will Stay in Georgia But he condemned the controversial new voting law in an op-ed.
chat room 4:48 p.m.
Younger’s Molly Bernard Had a ‘Noble Duty’ to Fill Diana’s Shoes This Season “I gotta say, I didn’t do any neck training, and I regretted it.”
this week in late night 4:03 p.m.
Tooning Out the News Won Late Night This Week Plus “Steve” Colbert and a very sexy slide whistle.
spoilers 3:43 p.m.
That Falcon and The Winter Soldier Reveal Is More Than Just a Fun Cameo Debuting this particular character at this particular stage in the MCU opens up some intriguing future scenarios.
tv review 3:06 p.m.
Big Shot Shoots and Mostly Scores John Stamos plays basically the anti–Ted Lasso in Disney+’s new family drama centered on a girls’ basketball team.
overnights 2:51 p.m.
Mythic Quest: Everlight Recap: Believe in the Light A characteristically chaotic office celebration for a fictional holiday finds Mythic Quest, and us, reveling in a post-pandemic return to normalcy.
art world 1:32 p.m.
Helen Marden’s Bitter, Lucky Light Her joyful-despite-everything pandemic paintings at Gagosian.
obits 1:10 p.m.
Helen McCrory, Peaky Blinders and Harry Potter Actor, Has Died at 52 She also had a prolific stage career, appearing in over 25 productions since 1990.
books 12:44 p.m.
Simon & Schuster Won’t Distribute Book by Cop Involved in Breonna Taylor Killing The bar is on the floor, folks.
two friends 12:41 p.m.
Hank Azaria Elects Richard Kind the Mayor of Hollywood “You know everybody.”
movie review 12:37 p.m.
Sebastian Stan Makes Monday a Movie Worth Waking Up For The actor and costar Denise Gough give it their all.
my single is dropping 12:21 p.m.
Brothers Osborne Release ‘Younger Me,’ Inspired by T.J.’s Coming Out “I’ve always wished I could speak to my younger self, give him a hug and show him who he’d become.”
evil stepsisters 12:06 p.m.
Barb & Star Made a Deal With Bob Iger Kristen Wiig and Annie Mumolo are writing a “fairy tale musical comedy” about Cinderella’s sisters.
bachelor nation 11:58 a.m.
Colton Underwood Addresses Cassie Randolph Allegations: ‘I Made Mistakes’ “I’m extremely, extremely sorry.”
matt berry 11:53 a.m.
Matt Berry Ushers in Cool-Middle-Aged Man Summer With a New Single Get ready for some crunchy guitar solos, kids.
overnights 11:51 a.m.
Younger Recap: The Motion of the Ocean This Quinn thing is going to be the worst, isn’t it?
best of 2021 11:50 a.m.
The Best Books of the Year (So Far) The slate for 2021 — of fiction and nonfiction alike — is bursting with vibrancy and verve.
By Hillary Kelly
More Stories